“...It Wouldn’t Be Immodest, I Think, to Say that I Built Up the Soros Foundation.” 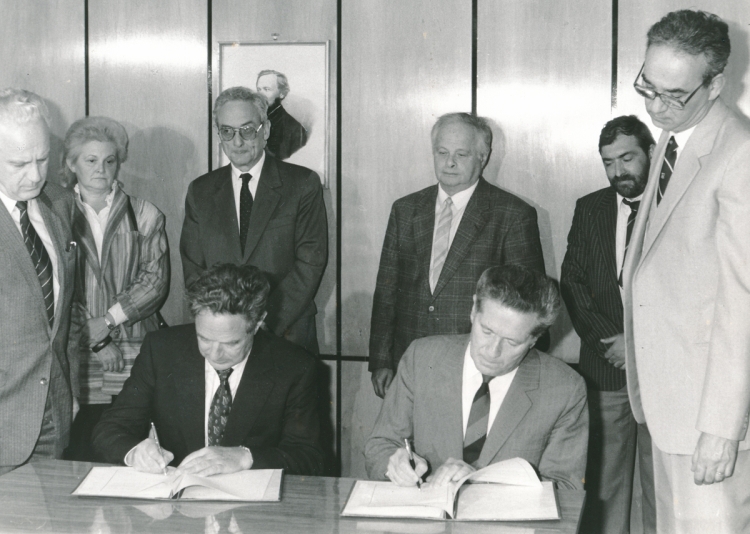 It has been twenty years since journalist and politician Miklós Vásárhelyi’s passing. Between 1984 and 1990, Vásárhelyi was the personal representative of George Soros on the Hungarian Academy of Sciences – Soros Foundation Committee. From 1991 to 1994, he served as Vice President of the Soros Foundation, then Chair of the Board between 1994 and 2001. If we look at the Hungarian regime change as a complex, decade-long process rather than the series of political events of 1989–1990, Miklós Vásárhelyi undoubtedly played a substantial role in it.

Forrás. [Source., or Boiling point] is a blog series by the Blinken OSA staff at the Hungarian news website 444.hu. Márk László-Herbert's post originally appeared on osaarchivum.444.hu in Hungarian. 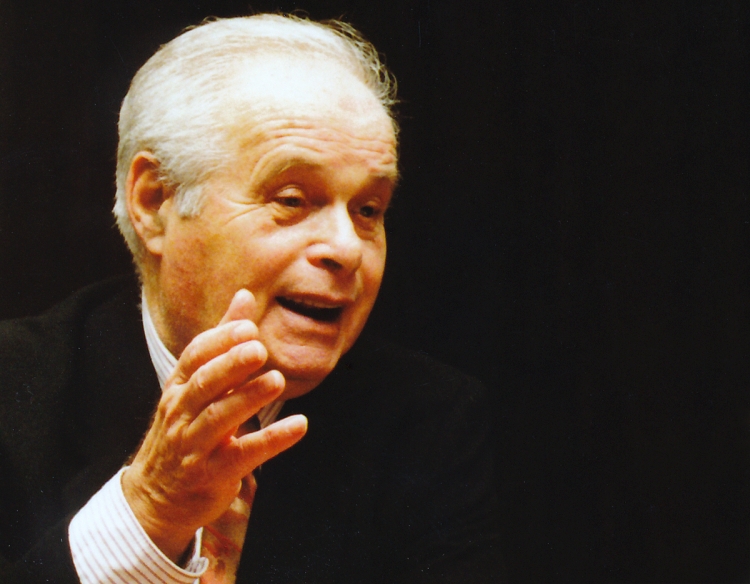 Vásárhelyi was not the rebellious, young anti-communist fighter, but an intellectual—well into his seventies in 1989—who had gained thorough knowledge on (and first-hand experience of) the “defects” of the system during the course of an adventurous life. Thus, let us begin with biographical moments.

Miklós Vásárhelyi was born in 1917 in Fiume, in the Austro-Hungarian Empire. By the time his father started working as a clerk at the local branch of the Commercial Bank, his mother had already lived in Fiume for a long time, she was practically a local of the city. Despite speaking three languages—Hungarian, Croatian, and German—at the age of six, he was sent to an Italian school. In an interview recorded around 1985 by András B. Hegedűs and Gyula Kozák, Vásárhelyi admitted that he had considered “Italian to be my native language.” The first time he realized this must have been at the age of eleven, when his family decided to move to Debrecen. He was enrolled in the Piarist school (“the most distinguished secondary school for boys”), and had to repeat a year because he had difficulties with Hungarian grammar.

Considering circumstances, his family led an upscale life in Debrecen. His parents regularly visited the theaters in Budapest, and they held an annual soiree catered by the prominent, Budapest-based Gerbeaud confectionery. But Miklós started to drift from his parents’ lifestyle early on. One of his friends, a “young boy from the gentry” from Bihar, who attended the rivaling Reformed school, reshaped Miklós’ view of the world by sharing with him ideas and literature that previously had been taboo. As Vásárhelyi later remembered, “I became a communist through him.”

After graduating from high school with flying colours, he tried to escape the growing anti-Semitic public sentiment in Hungary and began studying political science in Rome in 1936. However, he returned to Hungary just two years later, and led, for a while, a double life; as a car mechanic in Budapest he was involved with the local workers’ movement, the social democrats, and the illegal communists, and at the same time he attended the University of Debrecen, studying law. In the first years of the war, he regularly travelled to Debrecen to take his exams, completing his coursework. He quit his job as a mechanic, and started a profitable rag washing company(!) with a friend, until, in the autumn of 1942, he was enlisted to labor service where, with some privilege, he could get away on weekends to visit his family. He survived the horrors of war and illegality with forged papers and in hiding, in Budapest. He actively participated in the resistance and, by the time the war ended, had become familiar with the prominent figures of the Hungarian Left.

In 1945, at age twenty-seven, he became a journalist for the new daily Szabadság (Freedom), then for Szabad Nép (Free People). For months, he reported on the Paris Peace Conference, during which time he was promoted to lead columnist of the paper's foreign affairs section. As someone well versed in foreign policy who also spoke foreign languages, the Party mobilized him as well: Rákosi used Vásárhelyi while covering the 1948 elections in Italy to send a confidential message to Palmiro Togliatti. A year later, Rákosi unexpectedly dispatched him to the United States with a diplomatic passport to deliver documents to Andrei Gromyko, who was attending the United Nations General Assembly. 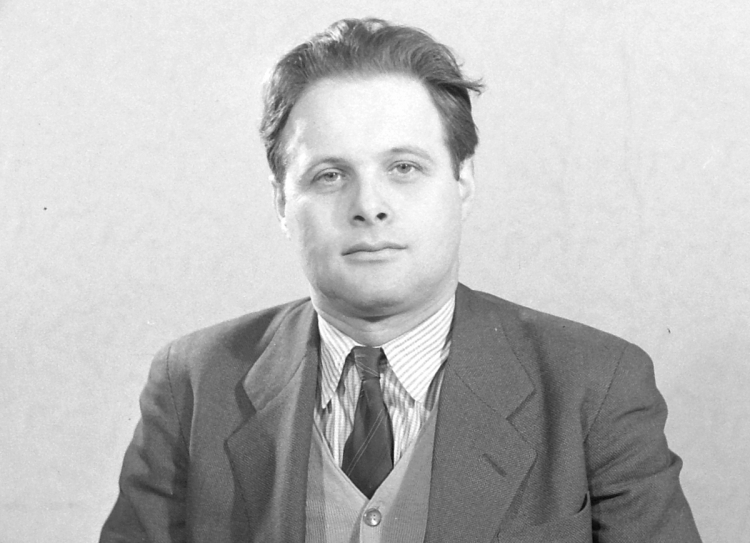 After the death of Stalin, as Vásárhelyi recalled in the above-mentioned interview, “at once, clarity had replaced ignorance” in his thinking. He soon found himself among the followers of Imre Nagy, then later in 1954, with the support of Imre Nagy, he was appointed deputy president of the Information Bureau of the Council of Ministers, where his main task was to promote the prime minister’s government program in the Hungarian press. Two years later, in October 1956, when Nagy became prime minister once more, it was an obvious choice to appoint Vásárhelyi as press secretary of the revolutionary government. In June 1958, he was sentenced to five years in prison for his role in the revolution as an eighth defendant in the trial of Imre Nagy, and was granted amnesty in 1960.

For more than a decade, the state apparatus hindered him from working in the media or any cultural institution. Whenever he managed to get a job at a publishing house, he was soon fired. During the mid-1960s, he became a shopper for Építőipari Kisipari Termelőszövetkezet, a construction cooperative, while taking on extra part-time jobs here and there to support his three children. Although it was hard to get by, Vásárhelyi was aware that there was an upside to his situation: he was out of sight, which meant no serious harm could come to him. Then in 1972, at the age of fifty-five, press historian László Márkus interceded for him (to György Aczél), and his “slate was cleaned” overnight. He got the long-coveted position of researcher at the Institute of Literary Studies. He was also employed by the Film Factory as a dramaturg (he was the dramaturg of several movies directed by Miklós Jancsó, Károly Makk, and Márta Mészáros).

In 1983, Vásárhelyi was invited to spend a year at Columbia University to research the events that led up to and occurred during the 1956 revolution. On several occasions, George Soros invited him and other intellectuals and dissidents for coffee, dinner, and conversation. By this time, Soros had been funding the research and studies of about a dozen Eastern-European dissidents living in the USA. He inquired from Vásárhelyi about the situation in Hungary; he was considering the possibility of legalizing his informal scholarship scheme. The unofficial blessing of the Ambassador of Hungary to the United States gave impetus to his cause; Soros promptly visited Budapest to negotiate with Deputy Prime Minister József Marjai, Deputy President of the National Bank János Fekete (“the god almighty of exchange controls”), György Aczél, and other officials. Making the most of the leeway available at the time, George Soros set up the Hungarian Academy of Sciences – Soros Foundation Committee under the auspices of the Hungarian Academy of Sciences, in May 1984. 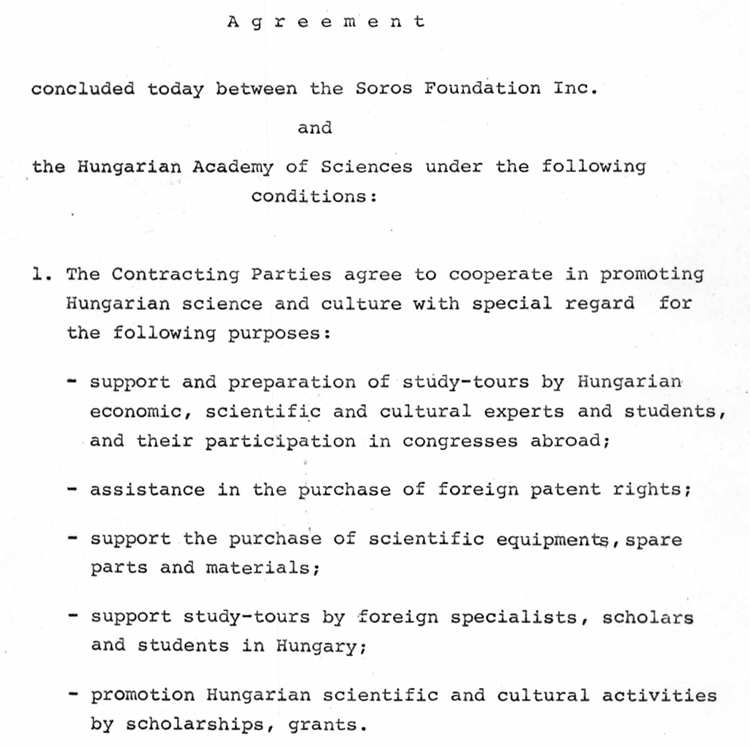 Excerpt from the 1984 agreement between the Soros Foundation and the Hungarian Academy of Sciences.
(Blinken OSA)

The whole construction was complicated, and it reflected the distrust between the government and Soros up until the change of regime. The committee was led by George Soros, president of the Soros Foundation–Hungary in New York, and co-chaired by Kálmán Kulcsár, deputy secretary-general of the Hungarian Academy of Sciences and later Minister of Justice. It was obvious that George Soros could not participate in the day-to-day operations of the committee, therefore he made Miklós Vásárhelyi his “personal representative in Hungary”—to the vehement opposition of György Aczél and János Kádár, which was dismissed by a strong ultimatum from George Soros.

“I was chosen . . .  back in the day . . . because I had a very broad network of contacts both due to my history and my years spent in prison; it was not limited either to communist reformers, oppositionists, popular or any one bunch.” 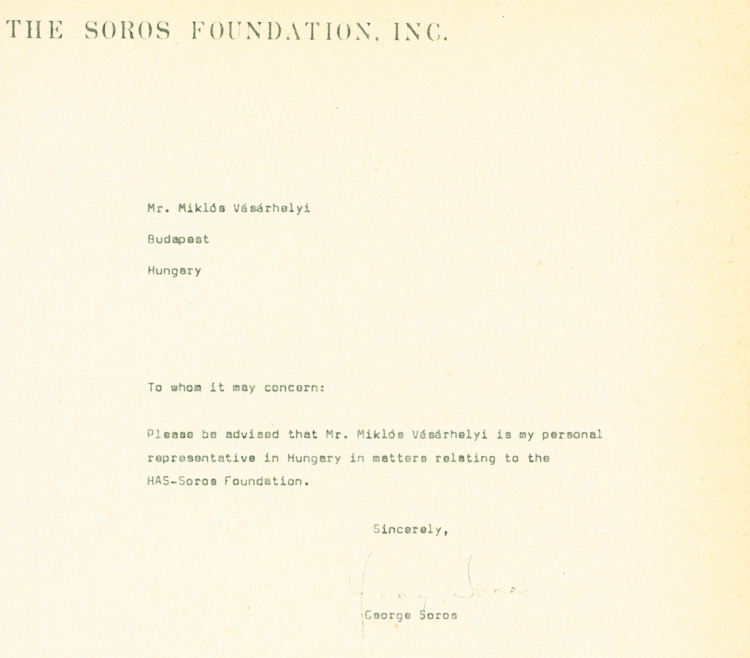 In 1984, George Soros appointed Vásárhelyi as his personal representative in Hungary relating to the Foundation.
(Blinken OSA)

It soon became apparent that Vásárhelyi’s appointment benefited everyone. If not in the day-to-day business of the Committee, his extensive contacts and excellent judge of character played an extremely important role in the selection of committee members, as well as the staff of the secretariat that assisted the Committee. Until the end of 1990, when the Foundation separated from the Academy, essentially every important decision affecting the Committee had to be taken as a compromise with the powers that be. In 1987, Vásárhelyi summarized the situation as follows:

“For the past three years, I have truly been cooperative and constructive, because it is in my interest to have the Foundation running as smoothly and effectively as possible. I am ready to make extensive compromises, and people can tell. I think I am the most diplomatic; any counterparty you will meet from the secretariat to any other department will be considerably more difficult to deal with, than I am.”

Vásárhelyi’s mediation was instrumental not only within Hungary, but also toward the Soros Foundation–Hungary and George Soros himself; he “softened” the categorical expectations of the staff in New York (who sometimes had difficulty to understand and accept the Hungarian circumstances). He effectively communicated the ever-increasing requests and needs of Hungarian applicants to the Foundation in New York, achieving the launch of new programs and the establishment of specialized boards.

George Soros and Deputy Minister for Education Ferenc Rátkay sign an agreement on expanding the financial support for the Hungarian programs, in 1989. Standing in the middle is Miklós Vásárhelyi.
(Blinken OSA)

As the number of applicants grew, the initial open application system was soon transformed into a system of specialized programs. “The Soros” launched more and more programs in the fields of literature, humanities, sciences, healthcare, education, culture, and arts. The list of winning applicants was always duly published in the Annual Reports. It allowed hundreds of students and researchers to travel abroad (mainly to Western Europe and the United States) to attend conferences, language courses, and professional exchange programs. By the end of 1990, the Hungarian Academy of Sciences – Soros Foundation Committee had provided nearly a thousand photocopiers to various Hungarian institutions, including universities, libraries, schools, and other governmental organizations, the indirect role of which in the regime change is hard to dispute.

There are other important chapters of Miklós Vásárhelyi’s life, which must be mentioned here; in 1988, as the only former convict of the Imre Nagy trial living in Hungary at the time, he initiated the establishment of the Hungarian Historical Justice Committee, which successfully forced the rehabilitation and reinterment of Imre Nagy and his fellow martyrs on June 16, 1989. He was a member of parliament (for the SZDSZ party) from 1990 to 1994, and played an important role in the creation of the Central European University from 1989 to 1991.

The Hungarian Academy of Sciences – Soros Foundation Committee (1984–1990) and the Soros Foundation (1991–2007) later grew into the Open Society Foundations, currently present in 120 countries of the world, the international office of which was forced by the Orbán administration to leave Budapest in 2018. In 2020, the Central European University was forced to relocate its US-accredited programs from Hungary.