Files on the Vatican and the Italian Communist Party: A Hypothesis 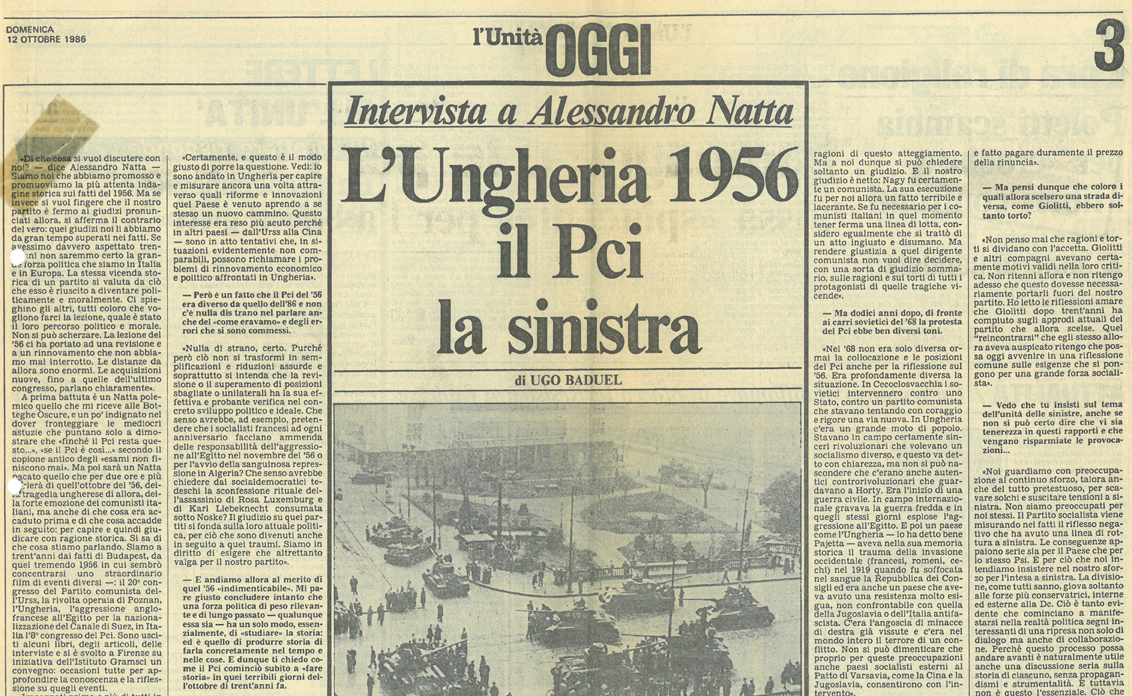 The first time I heard about Blinken OSA was in spring 2019, when I was spending a semester in Budapest as an Erasmus+ exchange student in my second year of the master’s degree in “Library and Archival Studies.” I had a meeting with Csaba Szilágyi and Örs Lehel Tari, to discuss the possibility of starting an internship at the Archives after my graduation, in the frame of the Erasmus+ Traineeship program. My university in Rome accepted our project for an internship in Hungary, and in February, 2020, only one week after earning my master’s degree, I left my country to start this new exciting experience abroad as a freshly graduated archivist.

From the very beginning of my collaboration with the Archives, the staff proved to be very friendly and available. I had the possibility to watch how different sections are organized, discussing with the people in charge of specific tasks the peculiarities of their jobs. I’ve received an overview of the reference service, the structure of the reference library and the related cataloging system, the audiovisual section and the archival practices of processing this unique kind of material, the IT administrator’s job in managing databases and the archival and library systems, and the records management procedures. I also had a chance to take part in in-house archival seminars discussing the topic of “trust” in archives and the concept of “counter-archives.”

My role at Blinken OSA was to describe four series, with the purpose of publishing the ISAD(G) records and finding aids in the online catalog, thus making them accessible for future researchers. Moreover, with each series I had the task of translating metadata into Italian, notably titles, the scope and content field, and content summaries. The four collections share the peculiarity of being made up of documents mainly written in Italian and English. The fact that an overwhelming part of the items were in Italian, and that they were mostly clippings from the Italian press, made me postulate a connection between these four series and the Rome Bureau, the news office of Radio Free Europe (RFE) based in Italy,1; with which the documents must have had some connection; e.g., the Rome Bureau may have collected the articles. The assumption of a relation between the items in the series and the Rome office is also confirmed by a high number of telex messages in the collections sent or received by the staff of that office. In particular, the names frequently mentioned in those telex communications (especially in the “Files on the Vatican” series) are Charles Robertiello and Michael Wilson, both represented as heads of the office in Rome. 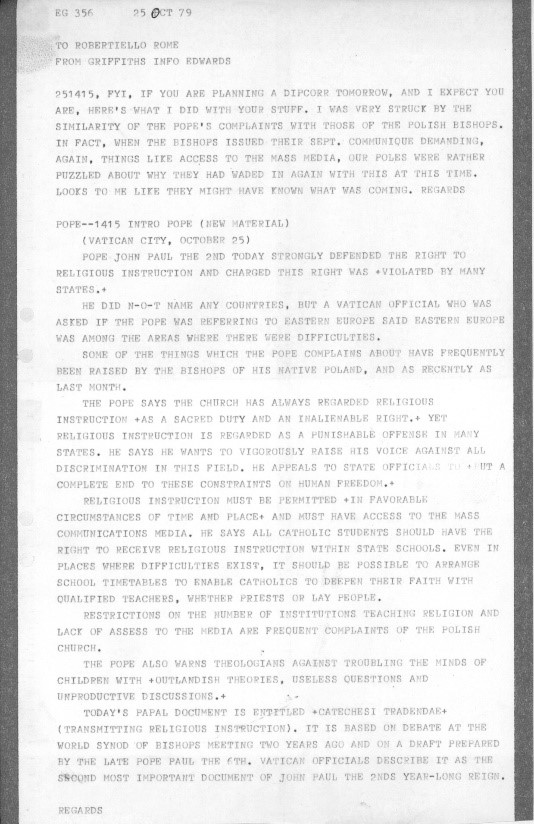 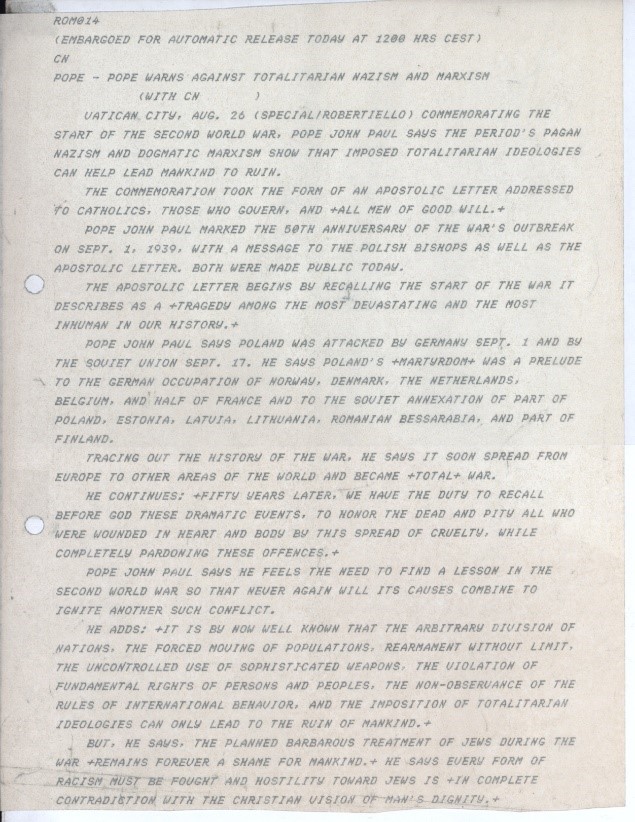 According to J. F. Brown, RFE was collecting news from the Vatican to spread information about the Pope’s activities in the countries behind the Iron Curtain, an activity that intensified even more after the election of Pope John Paul II, the first Pope in history coming from a communist country. On this occasion, RFE was the main information channel reporting the Pope’s activities to the Poles. Furthermore, RFE collected news about the Italian Communist Party (PCI), which RFE analyst Kevin Devlin, “the world’s greatest expert on the Western communist parties,”2 considered a major, independent member of the international movement.

For the above reasons, and specifically in the case of the “Files on the Vatican” series (HU OSA 300-120-27), we assumed a connection with the series “Rome Bureau” (HU OSA 300-1-1), comprising items collected by the Rome Bureau office, which appear to be similar in terms of the topics covered and the kind of material to the ones preserved in the Vatican series.

Going more into detail, the four series analyzed during my internship belong to the subfond “Western Press Archives,” and can be summarized as follows:

This series covers the time span 1960–1992, and mainly consists of newspaper clippings about the public activities of the Popes (i.e. audiences, speeches, trips abroad, etc.) and RFE’s internal telex communications. There are also some official publications issued by the Vatican Polyglot Press, such as the apostolic exhortations and apostolic letters written by the Popes. 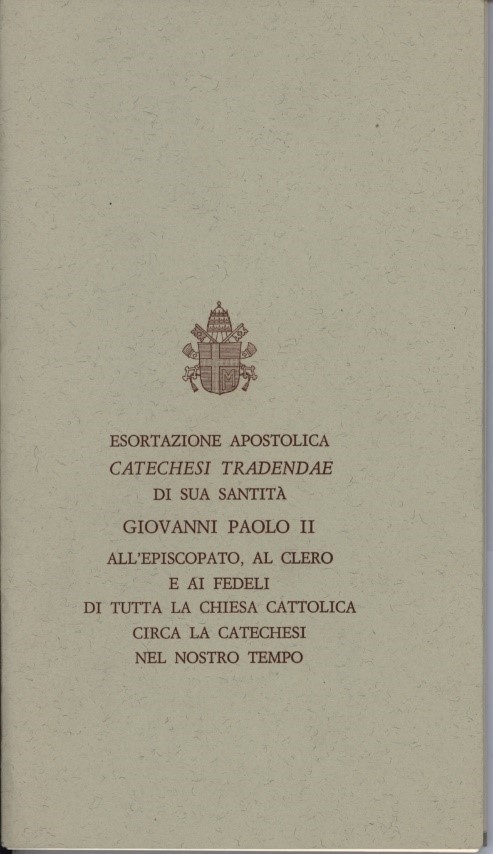 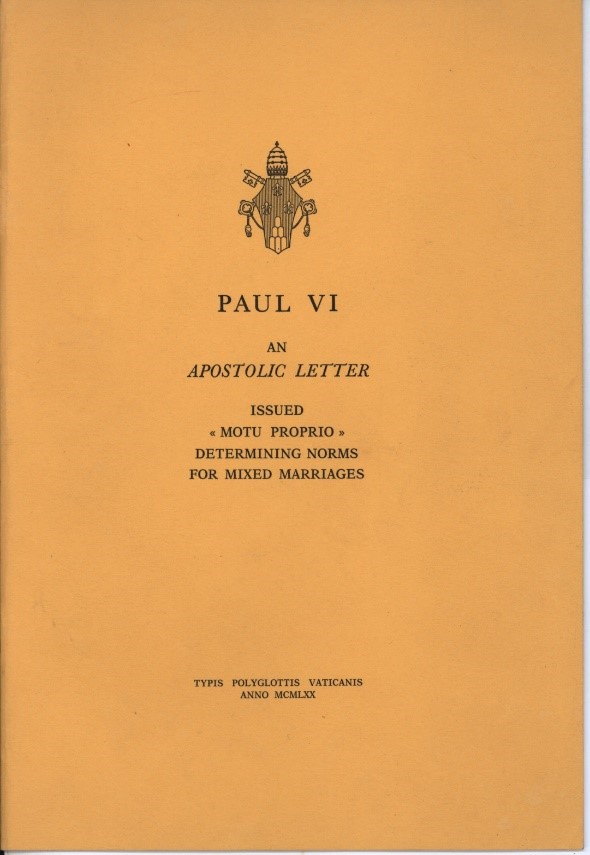 The collection focuses mainly on Pope Paul VI and Pope John Paul II, while Pius XII, John XXIII, and John Paul I appear only in one or two folders. It is worth mentioning that the travel activities of the Pontiffs started to intensify with Paul VI, who began to travel in order to meet the faithful around the world; until then, the Popes spent most of their time in the Vatican. Pope John Paul II was especially busy traveling, as testified by the content of some of the folders. Other folders concentrate on the situation of the Church in some countries, such as Hungary, and the diplomatic relations with the papacy.

This and the other two collections focus on the Italian Communist Party (PCI). This first series covers the years between 1961 and 1991 and is organized by subjects. Examples of subjects covered by the collection are: the historic compromise, the congresses held by members of the PCI, domestic policies, leadership of the party, and the newspapers L’Unità and Il Manifesto.

The collection covers the time span 1952–1991, and each folder is dedicated to a single country, under either a communist regime or a non-communist form of government.

This last series spans from 1961 to 1983. The thread running through the folders is the analysis of relevant public personalities, mainly Italians. The folders are named after these political figures; some the members of the PCI, others generally associated with Communism.

An 1986 interview with PCI leader Alessandro Natta in L’Unitá, the official daily of the party. As the first official comment on the Hungarian Revolution of 1956 from the Italian communists, Natta expressed that the execution of Imre Nagy was “an unjust and inhuman act,” and his party had “erred” by not denouncing the Soviet crushing of the uprising.
(Hungary 1976–1989, Italian Communist Party: Subject Files, RFE Western Press Archives, Blinken OSA)

Although I did internships in archives during my university years, the time spent at Blinken OSA with these series was my first work experience as an archivist after the end of my studies. I am thankful for the time the staff of the Archives dedicated to me to show how an archive works in practice, which made me appreciate more the studies I had pursued. Besides having learned new things, I also had the chance to spend time in an archive where people have different tasks, and collaborate and exchange opinions and goals in a very interactive working environment. Altogether, I am very pleased with the time spent at Blinken OSA as a trainee, and I only regret that, due to the pandemic, working physically at the Archives had to stop suddenly. Nevertheless, I could finish my internship remotely, once I had returned to Italy.