On the International Day of Freedom of Information 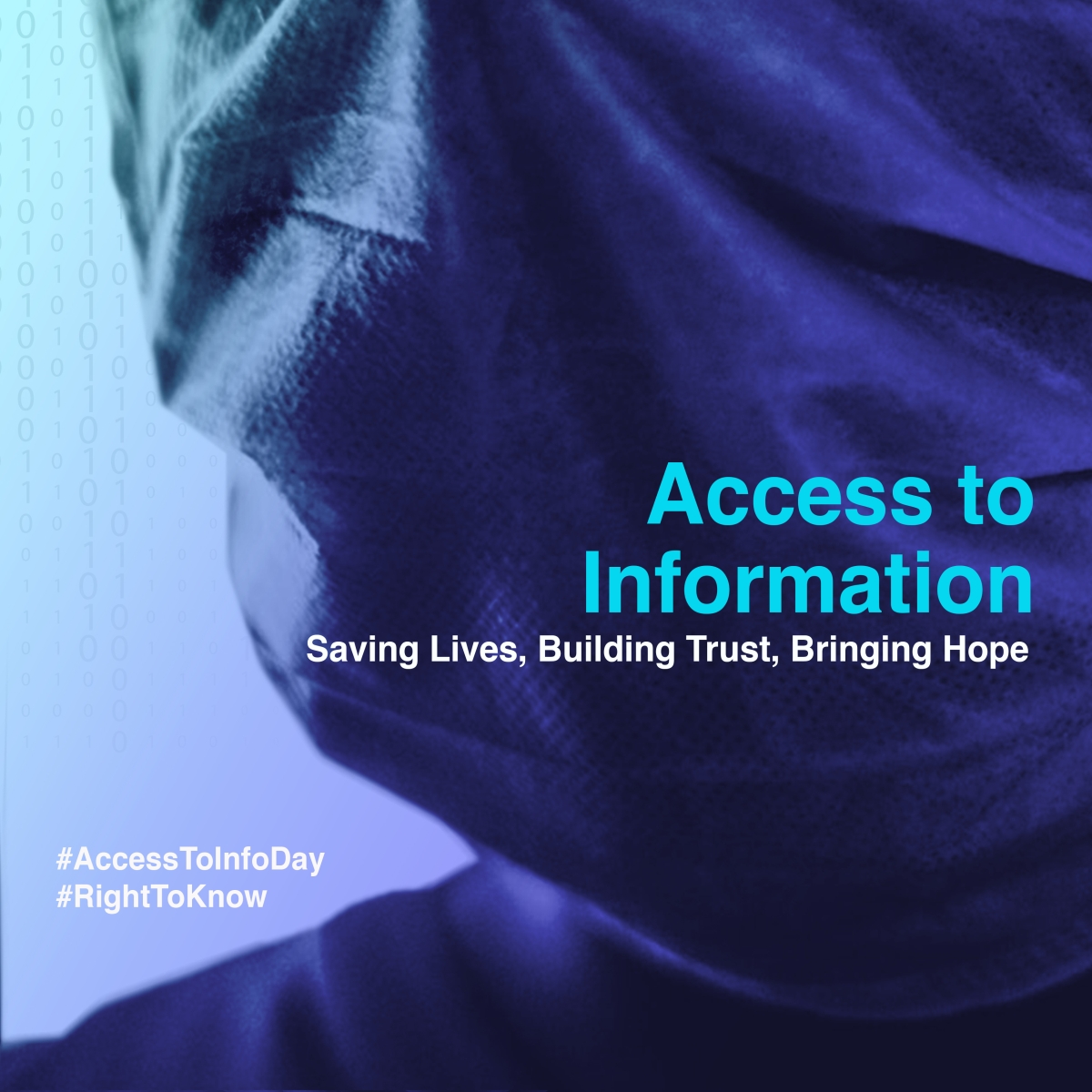 September 28 is the international day of freedom of information, also called as the Right to Know Day, which UNESCO recently proclaimed as the International Day for Universal Access to Information

In today’s world almost everything has an international day, but for me those are the most interesting ones, requiring the most attention, which celebrate people’s informational rights. Such days are January 28 (the International Data Protection Day) and the day today.

Nowadays, in the era of bombastic messages, political populism, and “alternative truths,” it is not easy to attract interest to abstract principles and informational rights. In an age when confidentially leaked-out information have greater prestige among journalists than trustworthy information and documents, the reliability of which can be double-checked by everyone, it is not surprising that the Right to Know Day—compared to celebrating forests, animals, or May Days—may seem overly philosophical for many, although its subject has a fundamental impact on people’s life. It is enough to think of the restricted publicity of the real data about the spread of the recent pandemic, and the vulnerability of individuals and families.

Open access, freedom, democratization of knowledge are appealing buzzwords. Here, however, we are not talking about a single notion, and many people do not even know what freedom of information (FOI) exactly is—and what an archive has to do with it.

As I argued more in detail in the Research Handbook of Information Policy (in preparation), in the last two and half centuries every progressive movement, new democratic legal order, profound societal reform, or revolution in the cultural West raised the idea of, and demand for, freedom of information. For the so-called new democracies of Central and Eastern Europe, freedom of information was one of the symbols of abolishing the dictatorial past during the great political changes around 1989. According to László Majtényi, the first Hungarian Parliamentary Commissioner for Data Protection and Freedom of Information, in the turbulent period of the great political changes in 1989, “the demand for freedom of information was a central axis around which the world has turned.”

Freedom of information, or in a broader sense, access to public information, is a fundamental element of constitutional democracies and rule-of-law societies. Constitutional democracy is more than a form of government or a legal system; the existence of certain public goods is indispensable for such political and social regimes. These indispensable elements are called constitutive public goods.

If we regard the importance of FOI in democratic societies, we can reasonably state that it is one of the constitutive public goods in society.

In the mid-20th century, the general understanding of freedom of information was the free, uncensored flow of news, ideas, and ideologies across borders and political regimes. (This idea was rejected or at least criticized in the Soviet bloc for ideological reasons, in Western European countries for reasons of potential US informational dominance, and in the developing world for reasons of protecting culture). The laws and other legal documents that have concretized and transformed the concept into norms since the 1960s, defined freedom of information as an individual right and/or an obligation of public agencies to provide information to the requesters.

In parallel with the attempts to define the content of FOI ever more precisely, a very broad sister concept emerged: “the right to know.” Naturally, it is a sort of moral right rather than right in the legal sense, encompassing access to all information that is necessary for fighting against all forms of social injustice, poverty, famine, disease, exploitation of the environment; in sum, a precondition to survival. As author and activist Aruna Roy put it, “The right to know is the right to live.” 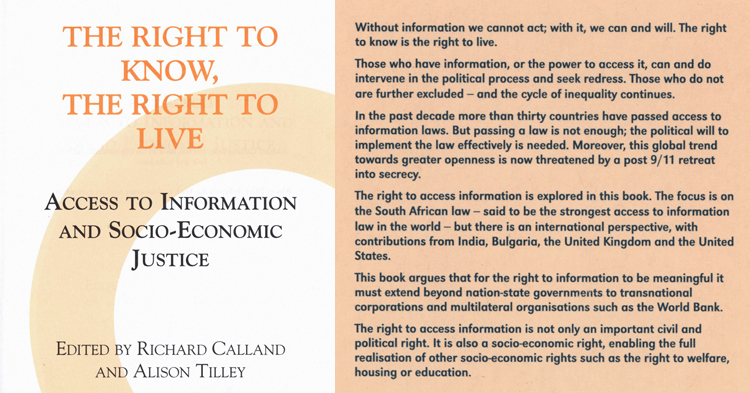 Today, more than 125 countries have FOI laws, thus the majority of the world’s population lives in an environment where, at least in theory, people have the right to access to public information. 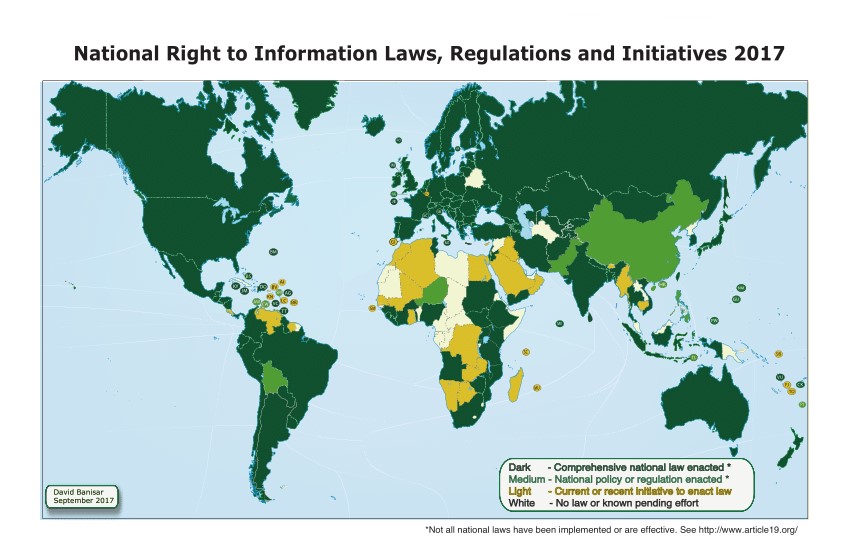 Not surprisingly, the civil sector, the FOI-advocating NGOs, also proved to be important actors in the enforcement of FOI: they help citizens submit their requests, assist them in court cases, digest and translate incomprehensible information, educate citizens and officials alike, and in general propagate the importance of access to public information.

Among the recent problems of FOI, a general phenomenon witnessed today is the change of perception of the borderline between public and private. One practical consequence of this change is that public matters are regularly outsourced to the private sector, and, if not guaranteed by law, information of public interest can then easily escape public scrutiny. Another general phenomenon is that lay users routinely confuse the whole internet with reliable sources of information, and regard the internet as an inexhaustible pool where “everything” can be found—and this is a major reason why the masses are not interested in demanding authoritative information through the available options of FOI. In addition, creating and consuming fake news and deepfake became a wide-spread practice, leading to what theorists call post-fact and post-truth society, the age of “alternative truths,” and the absence in many internet users of a desire to contextualize information. We can take the risk of claiming that information itself, something people have too much of, the reliability of which is often questionable and hard to double-check, is losing its value in public perception.

Besides these generic phenomena, the practice of restricting FOI in emergency situations is a specific problem. In response to the current situation, in April, 2020, the Information Commissioner of Canada published the call Access to Information in Extraordinary Times to heads of federal institutions to proactively disclose information. The civil organization Article 19’s May, 2020 report Ensuring the Public’s Right to Know in the COVID-19 Pandemic proposes a list of key information and data sets that should be proactively published by authorities to facilitate the fight against COVID-19 and ensure accountability.

As we have seen, FOI is about access to current information and documents administered by organizations performing public functions, while archives are custodians of historical documents, even if created in the recent past. The accessibility of the latter is also an important element of a healthy democratic information ecosystem, thus archives, in a broader sense, are important members of the virtual coalition for access to public information; provided that they do not only advocate for greater openness, but exercise it in practice, too.

Access to archives is regulated by FOI’s sister principles, laws, and recommendations, for example the Council of Europe's Recommendation on a European Policy of Access to Archives, the Principles of Access to Archives by the International Council on Archives, and the similar demands reflected in the Council of Europe Recommendation on history teaching in twenty-first-century Europe. Blinken OSA is operating in the spirit of these principles and recommendations. Although imposing limitations on access to certain archival documents and defining the borderlines between competing rights require constant legal and moral reasoning when serving researchers, our ethical standards and approach are generally accepted and appreciated by our researchers. 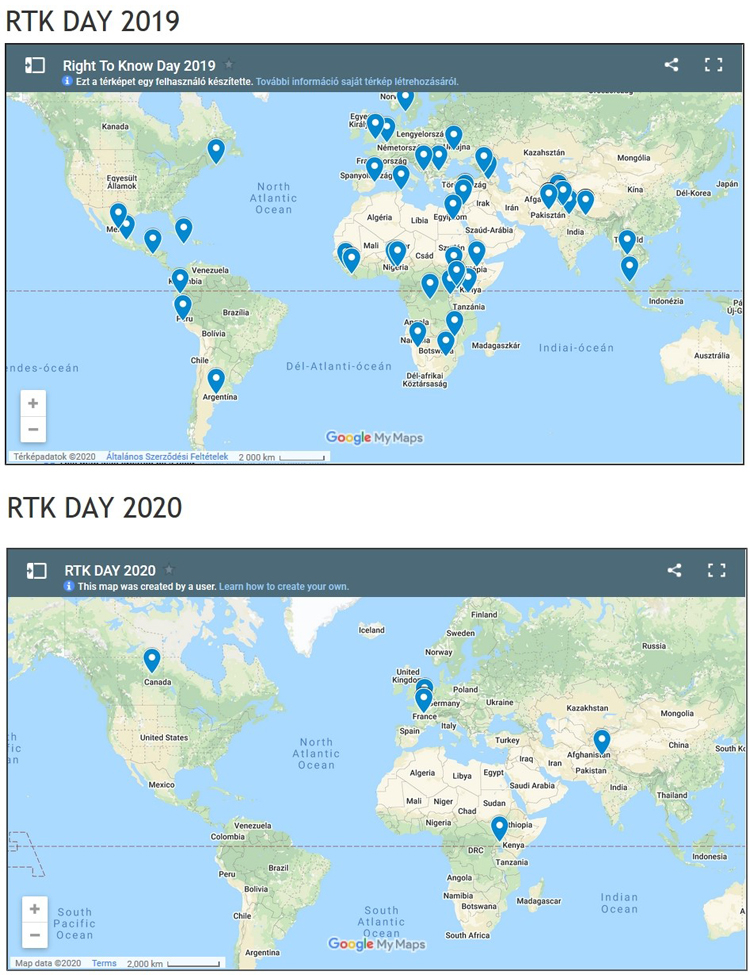 The 2020 map is more modest than the previous ones; presumably, less public events are organized this year because of the pandemic. In earlier years, CEU also organized such events, for example, a few years ago students gathered in the Octagon and submitted information requests on web platforms to public institutions of their respective home countries, in their mother tongue; many of them didn’t even know that they have a right to do so.

On this day—if we haven’t yet done so—let’s ask questions, request public information, for example through any of the national versions of the Alaveteli platform, and on other days of the year let’s visit those archives, first and foremost Blinken OSA, which provide access to information and documents of the recent past. 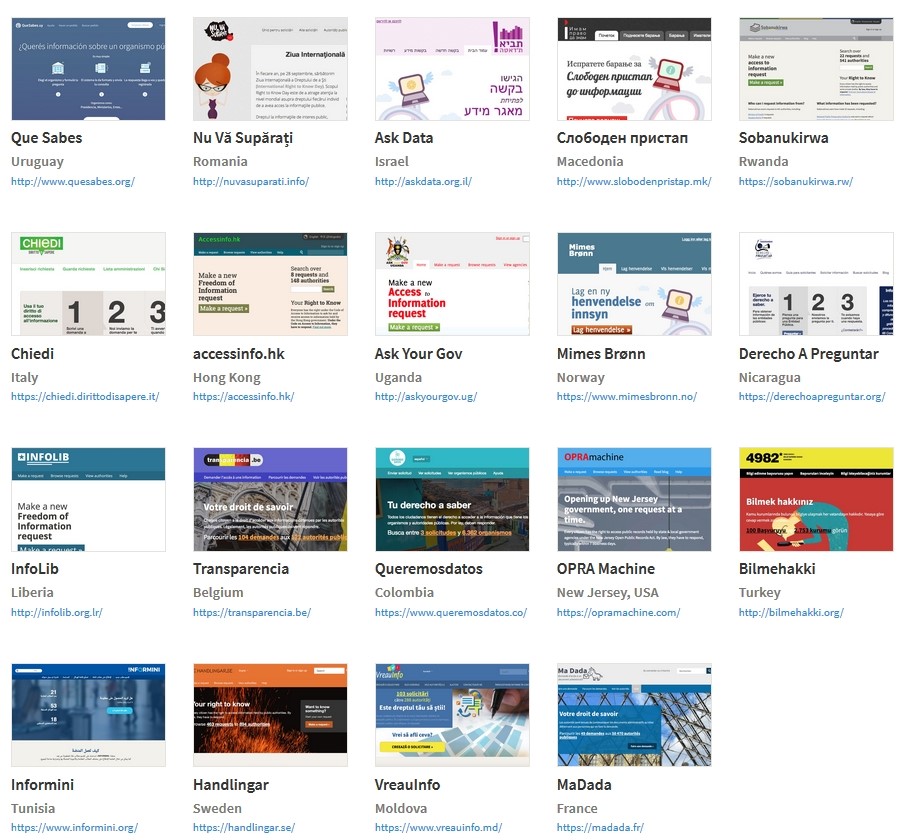