On the Stage of August 20: Hungarian National Day in a Refugee Camp

“The celebration took place in the courtyard of the San Sabba refugee camp, on August 20, at 11 a.m., near the monument commemorating the Italian and Jewish hostages the Nazis had executed here,” says a 1956 Information Item of Radio Free Europe (RFE). The speaker at the festivity recounted “the historic deeds and universal significance of our great, first king,” and the “intimate event was concluded by the national anthem’s accords sang together.” The report does not reveal whether the attendees recognized or embraced the complexity of the historical moment they participated in. From a distance of 65 years, we outline the background of the festive scene, with no evaluation comment.

Forrás. [Source., or Boiling point] is a blog series by the Blinken OSA staff at the Hungarian news website 444.hu. Miklós Zsámboki’s post originally appeared on osaarchivum.444.hu in Hungarian. 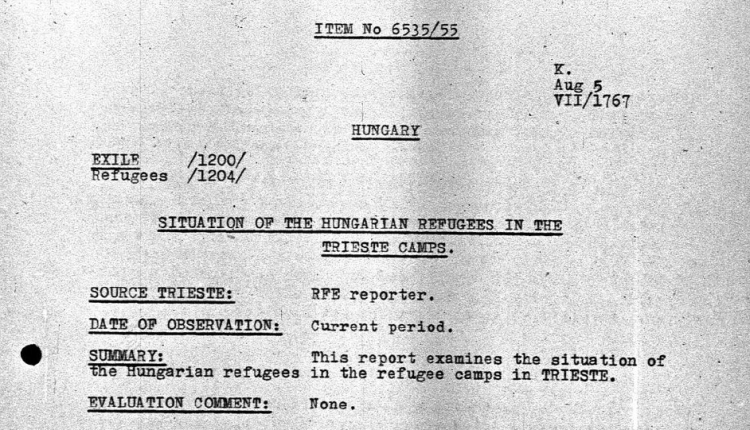 Following World War 2, hundreds of thousands left Hungary. In 1944–1945, it was the administrative and (para)military apparatus of the Horthy regime, as well as people associated with the Arrow Cross Party, while in 1947–1948, it were the personalities of the Second Hungarian Republic, who fled the country. Emigration, however, continued even after these major waves, if in smaller numbers; people left Hungary for political and primarily for economic reasons, crossing the gradually closing borders. According to Gyula Borbándi, a former RFE employee, in 1949, Germany registered 181,000 Hungarians, and in 1950, 21,000 lived in Austria; until 1951, 17,000 Hungarians arrived in the US, and until 1954, 14,000 arrived in Australia.

The process of “arriving” involved various periods spent in refugee camps; waiting for the recognition of one’s refugee status, for permission to leave, for resettlement, which often, especially in case of the old and the sick, took months, even years. RFE’s Information Items, produced for internal use only, give insight into refugee camps; the radio’s reporters (themselves, in part, political dissidents), frequently conducted interviews in refugee camps, and sent transcripts to the RFE newsroom in Munich. These Information Items mostly provide information on the developments and the general climate in Eastern Bloc countries; yet, some Items also reflect the conditions and the everyday life in the camps. 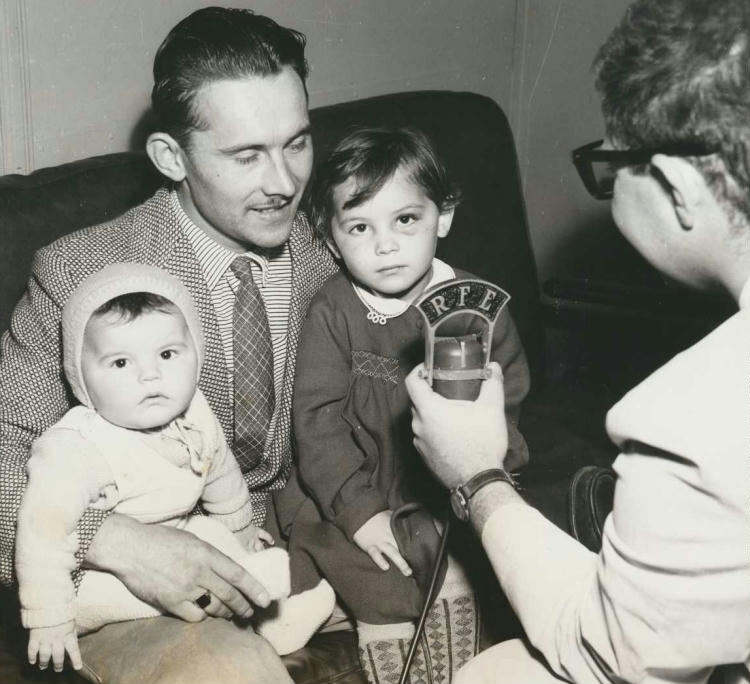 “Message to Hungary is given by a refugee family over Radio Free Europe,” 1959.
(HU OSA 300-1-8 RFE/RL Public Affairs Photographic Files)

RFE employees also visited the above-mentioned San Sabba-Main camp. San Sabba is a suburban area in the city of Trieste. The city was targeted by asylum-seekers for its maritime ports; as, in the 1950s, Italy struggled with high unemployment, and, consequently, refugees were forbidden from work, settling here was unlikely anyway. Thus, refugees considered their stay in San Sabba-Main a temporary stop toward, principally, the US or Australia.

According to a 1953 Information Item on the refugee situation in Trieste, the “majority of the refugees from the countries beyond the Iron Curtain chose freedom because they could not stand the Communist regime in their countries of origin. The greatest part of them are peasants, whose land was confiscated.” This applied to Hungarians as well: in 1955, 80 percent of the Hungarians in the Trieste camps were peasants. From Hungary, Trieste was accessible through Yugoslavia, by crossing, as a first step, the heavily guarded Hungarian–Yugoslav border. In Yugoslavia, escapees were arrested, and “held in prison and internment camp, without explanation whatsoever, under the pretense of the fictional suspicion of spying, mainly in internment camps in Gerovo, Zrenjanin, and Goljak, where the bad food and treatment caused health problems for many,” reports the 1955 Information Item. After series of lengthy interrogations about their reasons for fleeing, their worldviews, and their future plans, a decision was made if they were allowed to continue their journey as political refugees toward Trieste. There, refugees were split between three camps; Prosecco Opiciana, San Sabba-Annex, and the central San Sabba-Main. The population fluctuated continuously. According to the 1955 report, the Trieste Refugee Internment Camp hosted 1,800 refugees from 12 countries, mostly Russians and Yugoslavians, and also Czechoslovaks, Romanians, Greeks, Bulgarians. There were 285 Hungarians in the camps in 1953, and 117 in 1955; 72 men, 34 women, and children. 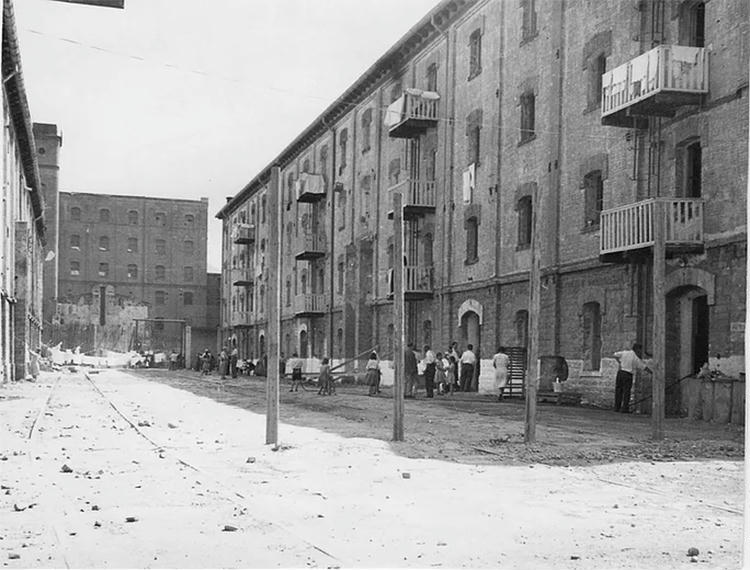 “This is a four-storey building with sad exterior and depressing interior, which was a railway storage of the Austro-Hungarian Monarchy, later a rice mill, used by the Nazis during World War 2 as prison and execution site for partisans, suspected communists, and Jews, also equipped with gas chambers. A smaller monument erected on the courtyard speaks about this past function,” describes the 1955 Information Item the San Sabba-Main camp. The Nazi police detention camp that operated here until 1945 was the only camp in Italy with an active crematorium. The estimated number of prisoners who passed through it is between 15,000 and 25,000: mostly partisans, Italian, Slovenian, and Croatian political prisoners, and Jews. Many were tortured, 5,000 were murdered. Prisoners were also deported to other camps from here; political prisoners to Dachau, Buchenwald, and Mauthausen, Jews to Auschwitz and Bergen-Belsen. To hide evidences, retreating Nazis blew up the crematorium when dissolving the camp on April 29, 1945.

After liberating the camp, the Allies transformed the building into a refugee camp, without, however, considerable modifications. According to RFE’s 1955 Information Item, the living quarters (created from the former Nazi detention camp’s cells) had “sections of 30/20 meters in size, parceled out by paper walls into 40 cabins on each floor. One cabin houses either one family, or three–four men (some lodgings are shared by six–eight lads). Half of the cabins, due to their inner position, have no sunlight. Here, residents need artificial light day and night.” On the ground floor was a large dining room and a well-equipped kitchen where the Italian authorities “assigned a cook from each nationality.” Since a “nice stage” stood in the dining room, residents could organize folk events and gatherings. Furthermore, they had table tennis, a gaming room, and in the courtyard “bars, fruit sellers and other groceries stands”; children could use “all sorts of games and sports tools.” Hungarian children could attend Hungarian classes in the camp’s elementary and secondary school, teachers were paid by the YMCA, while the American Catholic League provided teaching equipment; Hungarian school books were not available. A vocational training school had courses on masonry, carpentry, auto and radio mechanics, shoemaking, gardening; in 1955, the training school had 17 Hungarian pupils. The YMCA offered language courses, “Hungarians mainly study English, 60 percent of the adults regularly take language classes.” Residents of the camp, however, did not have enough bathing soap, toothpaste, and most importantly, not enough clothes; without a job, they could not afford buying, while “95 percent of the rare clothing aids was stuff for women.” 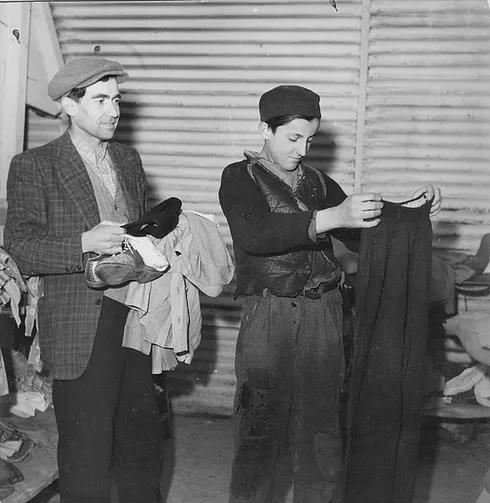 Still, people in the camps were free men, and could, for example, freely visit Trieste. True, locals did not welcome them with open arms; with unemployment soaring, Triestians were rather hostile toward what they saw as potential competition. Furthermore, according to the 1953 Information Item, political forces exploited the situation, and in the 1952 general elections the governing parties as well as the opposition tried to gain votes through anti-immigrant slogans.

Residents were also free to organize themselves. “The Hungarians living in the camps, within their own circles, by a secret and democratic vote, formed a committee for refugees.” Its main task, besides “providing assistance to emigration,” was to promote and preserve Hungarian cultural values, by, for instance, organizing memorial services and celebrations. Numerous Information Items capture such events; on March 15, 1955, the traditional folk-dance performance was a great success, and on October 6 in the same year, the commemoration of the martyrs of the Hungarian Revolution of 1848 included a speech recalling how “during World War 2, the Hungarian and the Italian people stood as allies and comrades against Eastern barbarism progressing toward the heart of Europe.”

Each year, on August 20, Hungarian refugees in Camp San Sabba-Main celebrated the National Day of Hungary, or St. Stephen Day. In 1954, the celebration was held in the open-air picture theater, where the host presented King St. Stephen’s life work and the foundation of the state; while in 1955, in the Servite church in Trieste, the camp’s schoolteacher “called attention to the tragic fate of their fellow countrymen in Hungary, with dramatic words.” In 1956, the Hungarian refugees residing in the camp “attended the memorial celebration in full number”: the men, primarily peasants, and also craftsmen and intellectuals; the women, housewives; the children; the “difficult to resettle,” such as the elderly and those who had recovered from tuberculosis; members of the Magyar Harcosok Bajtársi Közössége (Comradely community of Hungarian fighters, officially: World Federation of Hungarian Veterans); individuals who, either for different political reasons, or economic constraints, or because they were afraid, had to leave their homeland, in hope of a better life. Near the memorial of the Nazi detention camp’s victims, the president of the Hungarian refugee committee “demonstrated the timeliness of the ideals of St. Stephen” in his celebratory speech by emphasizing, “only the star of St. Stephen’s ideals is capable to show the way amid our nation’s current struggles, so to say, to guide our brothers and sisters at home out of the Communist dead end, and to give direction to our hiding fellows scattered throughout the free world.”

On October 23, two months later, the Hungarian Revolution of 1956 broke out. After it was suppressed, 200,000 people fled the country through the borders of Austria or Yugoslavia. International efforts were successful in resettling 170,000 asylum-seekers in eight months, which hardly comforted the ones still waiting in refugee camps. Hungarian refugees in Camp San Sabba-Main announced a hunger strike in 1957, demanding entry to the US. The Zellerbach Commission’s 1959 report on the European refugee problems urged, beyond resettling refugees as quickly as possible, that the “reception of new escapees should be humanized,” describing Camp San Sabba-Main as “a forbidding walled compound” that “ranks as one of the most dismal refugee camps in Europe.” The “particularly bad reception centre at Trieste“ was also highlighted in the international camp-clearance campaign planned and supervised by the UN in 1959–1960. 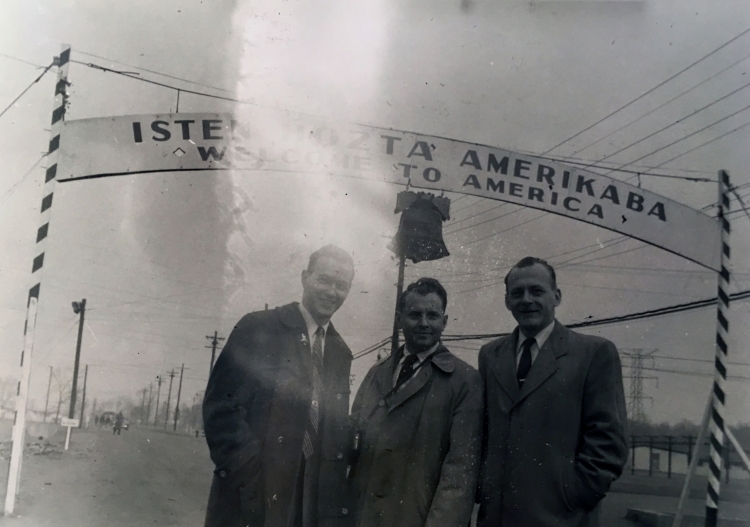 Many 1956 Hungarian student refugees to the US arrived at the US Army's Refugees Reception Center at Camp Kilmer, NJ.
(HU OSA 412-0-1 Gary Filerman Collection on Hungarian Refugees of 1956)

The refugee camp San Sabba-Main was closed in 1965. Today, a museum presents the Nazi past of the building, honoring the memory of the detention camp’s victims.