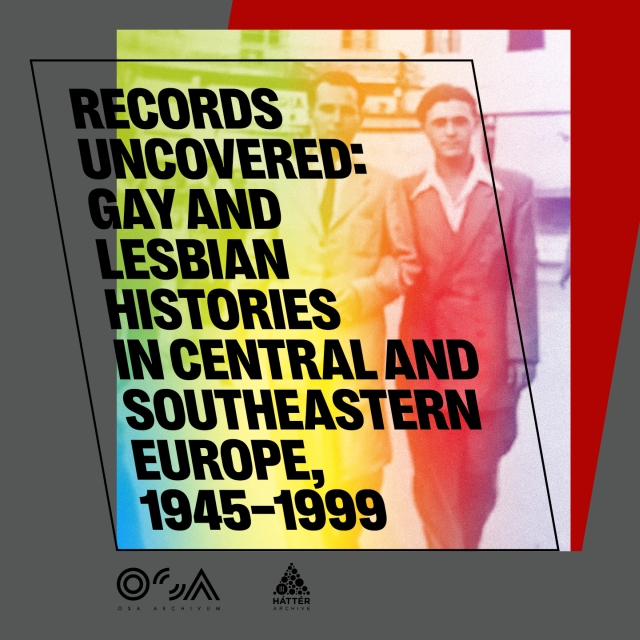 New online exhibition at the Blinken OSA! The first result of our collaboration with the Háttér Archive and Library, “a manifesto-in-documents,” is now available online:

The exhibition was introduced by the curators and the researchers:

“On behalf of the Blinken OSA, I welcome you at the opening of the Records Uncovered online exhibit. The exhibition reflects on the 20th-century gay and lesbian histories in Central and Southeastern Europe. These are presented, among many other documents from diverse sources, through less researched and previously undiscovered archival materials from the Blinken OSA’s holdings. Records Uncovered is also a pioneering archival project. By interrogating the social, cultural, and political contexts of record creation and by revealing “tacit narratives'' concealed in archival classification and labeling, we managed to embrace the multivocality of the records, and to bring the struggles of LGBTQI+ individuals and communities for recognition and self-representation in sharper focus. At the same time, we laid down the foundation of a curated collection to be improved and maintained in cooperation with LGBTQI+ organizations from the region. Thus, this undertaking is also about developing synergies between the (counter)archives and the community archives, about contribution and participation based on mutual trust and respect. Together with the Háttér Archive in Hungary, we invite further contributions of relevant documents, stories, and personal effects, which will be added to the online exhibit and presented to our audiences also in the form of a physical exhibition in February, 2022. But through shared archiving, curation, and preservation work with our partners, this common collection and comprehensive LGBTQI+ archive will remain in the making and active in the many years to come.”

“The exhibition Records Uncovered was created and launched online in a year when the decade-long political attacks on LGBTQI+ persons in Central Europe reached their height. For years, populist governments in the region have been constantly reinforcing the view on LGBTQI+ movements as “rootless” in the countries of Central and Southeastern Europe. LGBTQI+ movements were qualified by these governments as mere proponents of a supposedly “imported gender ideology” that endangers the political, social, and cultural traditions of the respective countries. This exhibition evinces the understanding and treatment of homosexuals in countries that commonly shared two different political goals at two different periods: the establishment of a new Communist society between the mid-1940s and the early 1990s, and the transition toward a democratic society in the following years.”

“The online exhibition Records Uncovered came into being as a result of bringing together the holdings of two archival institutions based in Budapest: the Háttér Archives, which is the oldest and largest LGBTQI+ archive in Hungary, and the Vera and Donald Blinken Open Society Archives. The Blinken OSA is both a repository of important collections on the history of Central and Southeastern Europe and a research and public outreach institution that seeks for novel ways of making use of archival documents. Our archival holdings contain documents that highlight much of the challenges that the LGBTQI+ communities were facing behind the political boundary known as the Iron Curtain and in the early years after the collapse of the Communist bloc. For this exhibition, we researched the documents that inform us how the Soviet Union and the rest of the societies in the former Eastern Bloc shaped and constrained the lives of LGBTQI+ communities. And also how the latter were raising their voices in the public sphere for their rights and equal status as citizens in these societies. To uncover these stories, we turn to legal documentation, media reports, private and institutional correspondence, art works and ephemera.”

“Since the establishment of the Háttér Archives and Library, we have been collecting and processing documents related to lesbian, gay, bisexual, trans, queer, and intersex people. We think it is a priority to document the history of our community, both locally in Hungary and in the wider international context. We believe it is essential that we try to draw attention to the hidden, untold stories of our community, which bear significance not only to the LGBTQI+ people, but to the society in general. During the last half year, in collaboration with the Blinken OSA, we have invested a lot of energy into studying the collections of both archives, in order to present the histories of the LGBTQI+ people in Central and Southeastern Europe, covering the period five decades after the Second World War, with special focus to the history of the community in Hungary. During the research and preparations, we have found many interesting documents, photos, press clippings, and objects, which we also digitized, contributing to both the project and the research aspect of our collections. We all hope that the call we put out with the Blinken OSA will result in a wider cooperation of other Central and Southeastern European archives, and we also count on that the offers of private individuals will become part of the public domain. Owing to this wide-scale collaboration, hopefully, we can organize an exhibition in February, 2022, at Galeria Centralis, which will be a complete and at the same time precise presentation of the histories of the LGBTQI+ people.”