Not long ago, a few colleagues visited Óbuda to meet Pál Ferenczi, a retired tailor who, at the grand age of 95, wanted to talk about the year he spent in Mauthausen with Leó Goldberger, the former owner of Blinken OSA’s home, the Goldberger House. Our building at Arany János 32 was completed in 1911, and housed the company headquarters of Goldberger and Sons Ltd until the end of the Second World War. Nationalized in 1948, the house was then used for storage purposes by the National Textile Factory and, from 1981, was home to the Konsumex “dollar shop”. The Goldberger House’s centenary was also the inspiration for the annual Budapest 100 festival, now in its sixth year. 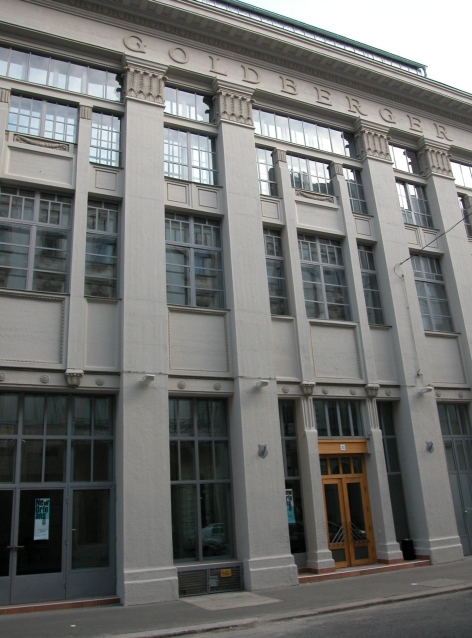 Following the German occupation of Axis Hungary in March 1944, Pál (or Pali bácsi, Uncle Pali) was arrested by the Gestapo on suspicion of being a member of Tito’s partisans, and deported to Mauthausen, not far from Linz, Austria.

The camp at Mauthausen was established in 1938 to house political opponents of National Socialism, marginal social groups and Jews, and was extended over the course of the war into a network of satellite camps which liquidated dissidents from across occupied Europe, and used forced labor in quarries and for armament production.  A short history of the camp can be read here at the KZ-Gedenkstätte Mauthausen site; the Bulletin Mauthausen published by the Austrian Federal Ministry of the Interior can also be downloaded from this link. Detailed information on the concentration camps by the KZ Gusen Memorial Committee is here.

Hungarians deported to Mauthausen in 1944 included Jews and non-Jews, and prominent figures in political, economic and cultural life, including Dr. Leó Buday-Goldberger (1878-1945). Goldberger was a leading modernizer of the textile industry in Central Europe (a 1928 photo of the Goldberger factory interior is here), director of the National Association of Industrialists (GYOSZ), and member of the Upper House of Parliament from 1935. Precisely because of his social standing, Goldberger was arrested by the Gestapo on the first day of the German occupation of Hungary, March 19, 1944, and deported to Mauthausen. 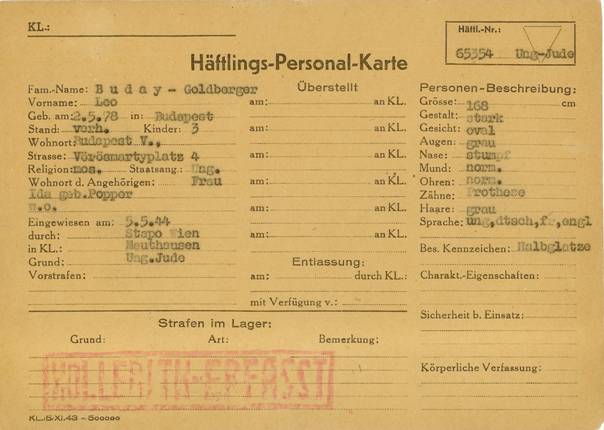 Leó Goldberger and Pál Ferenczi arrived at Mauthausen on the very same day, May 5, 1944. Goldberger was grouped with the ‘prominents’, while Uncle Pali was with the political prisoners, both of which categories ranked higher in the special camp hierarchy than “just Jewish” prisoners (even though both of them were Jewish). They shared the same barrack, number 2, although were placed within different sections. Food was everything, and bread was hard currency. Survival depended on developing skills to obtain extra nutrition. The staple camp food consisted of soup made of turnip, beetroot and potatoes, and bread. Bread portions diminished by the day, as more and more inmates arrived at Mauthausen, the ration fell from one-third to one-tenth of a loaf per day. Both the vegetables and the bread were often rotten. Bread crumbs were precious. The older prisoners reminded the somewhat picky new arrivals that the turnip soup they refused would just be fine after a few days. Uncle Pali had to hold his nose tight with his left hand to be able to swallow the soup, even after one week spent in starvation. For Goldberger, with his sensitive intestines, the food was inedible. He fell sick, and suffered greatly from a bowel infection almost from the start. The fellow inmates felt for Goldberger. Early on, he had developed a voucher system, by issuing bonds to German officers in direct contact with the prisoners, who in exchange for food and favorable treatment, were promised properties and valuables by Goldberger, should he survive the camp. This way, despite constantly losing weight and suffering from acute ailments, Goldberger survived till the very last days.

There was not only a lack of food, but also of basic clothing and bed clothes, like shoes and blankets. A blanket was considered a valuable item because there were just so few of them: two inmates shared one blanket, and to make best use of it, they had to sleep head to toe.

Inmates’ shoes were confiscated, and they had to walk in uncomfortable wooden shoes. Whenever somebody had to leave the barrack for some reason or other, Uncle Pali recalled it was very awkward, because the guards could be alerted and punish any noise-makers, depending on their whim. 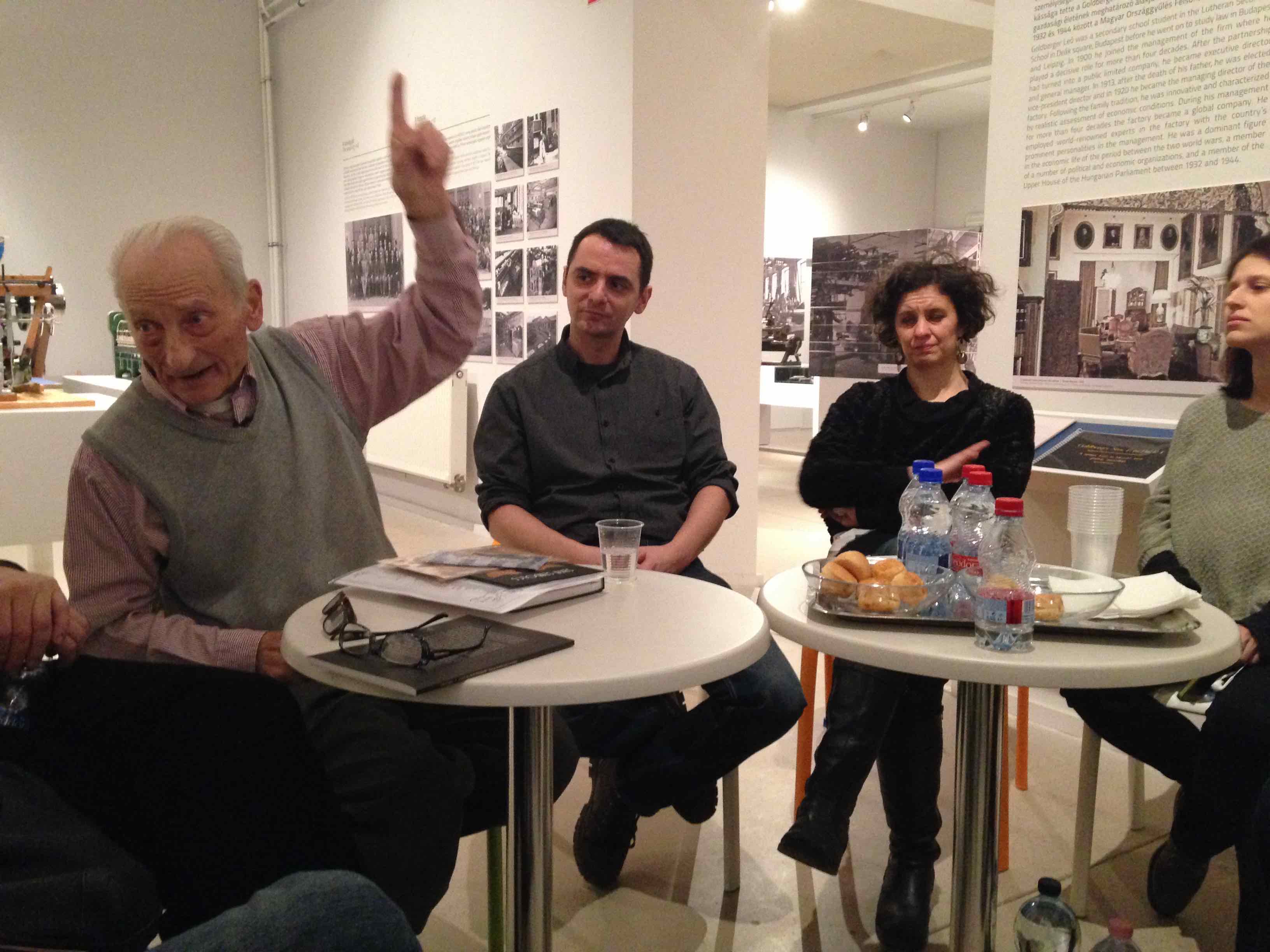 As a good tailor, Uncle Pali figured out that they should sew silent slippers from fabric. However, there was of course no way of obtaining appropriate material in the camp, since stealing ragged blankets was regarded as a serious crime: damaging state treasury property. Despite the huge risk, the tailors started to sew slippers for the inmates. Goldberger heard about this plan, and asked Uncle Pali to sew a pair for him, as well promising to thank him after the war. 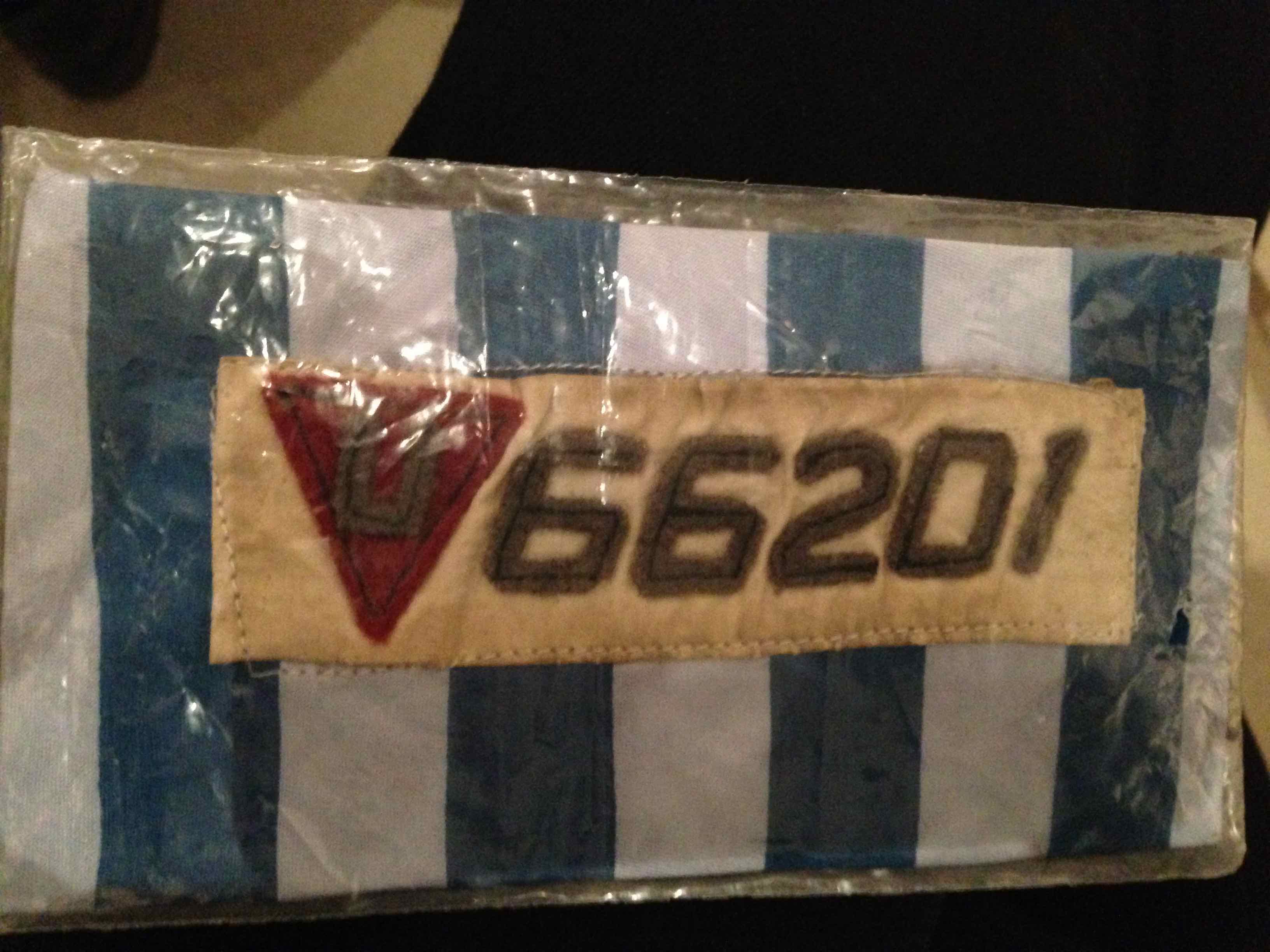 ID sewn by Uncle Pali. Credit: Judit Izinger
Uncle Pali worked as a ‘night tailor’ in the camp, producing garments for prisoners. He told us that by the time of their arrival in Mauthausen, the Germans were already aware of the fact that the war had been lost, and the new Hungarian arrivals were also regarded with suspicion by long-term inmates, who disliked this new intake in the ‘sanatorium’; there was also an element of antisemitism in this antipathy. Prisoners were kept strictly separated according to ‘group’, and Uncle Pali recalled a roll call of elderly men who were asked by an SS guard how many servants they had had. The first man replied, ‘two’, and received two slaps. The second man replied ‘one’, and was slapped once. The third man in line looked the guard in the eye, and said ‘I served in the war with your father.’ He was let go without punishment.

Goldberger was well respected in the camp, and once told Uncle Pali that he’d only need his head to be left in place for his company to set up operations anywhere else in the world. Goldberger died aged 67 in Mauthausen on May 5, the very day the camp was liberated by US troops. Uncle Pali claims that Leó Goldberger’s death was a consequence of a long-term malnutrition, an infection referred to as the ‘Ukrainian sickness’. But he also said that according to a fellow Jewish prisoner in Mauthausen, Goldberger’s condition worsened, and he died because of the fine food in a ‘Red Cross parcel’, which he couldn’t resist. Some time in April 1945, to the utmost surprise of the prisoners, they were given food packages by the Red Cross, consisting of cheese, biscuits, sardines and chocolate. The story goes that a doctor advised the prisoners to take only “fingernail-sized portions” of the nourishing food at once, as the digestive system could barely handle oil, grease and protein after such a long time of deprivation. Uncle Pali claimed that the sudden intake of the otherwise good food could have contributed to Goldberger’s death. Archival footage of liberation is available here at the United States Holocaust Memorial Museum website. 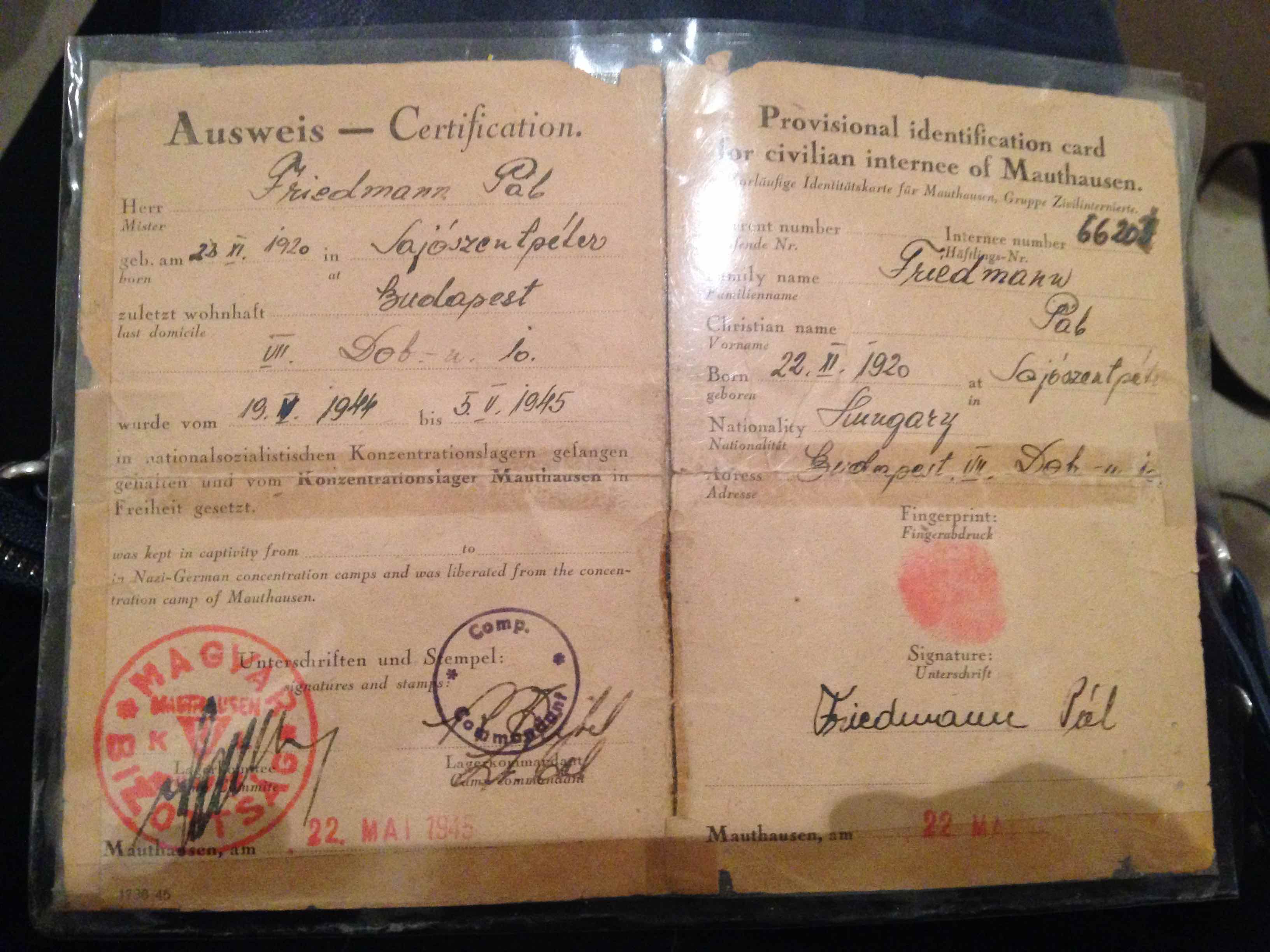 The site of the Textile Museum in Óbuda, where we met Uncle Pali, was once home to the Goldberger textile factory, and now contains numerous original looms, machines, textile samples and prints, as well as a textile workshop used for popular educational programs. We were lucky enough to meet Uncle Pali via his filmmaker son Gábor and his partner Gül, who are in process of making a film about Uncle Pali’s life. Our conversation was a memorable and very experience, a rare opportunity to meet a survivor who was happy to share his experiences with such clarity, humor, and joy at being alive. 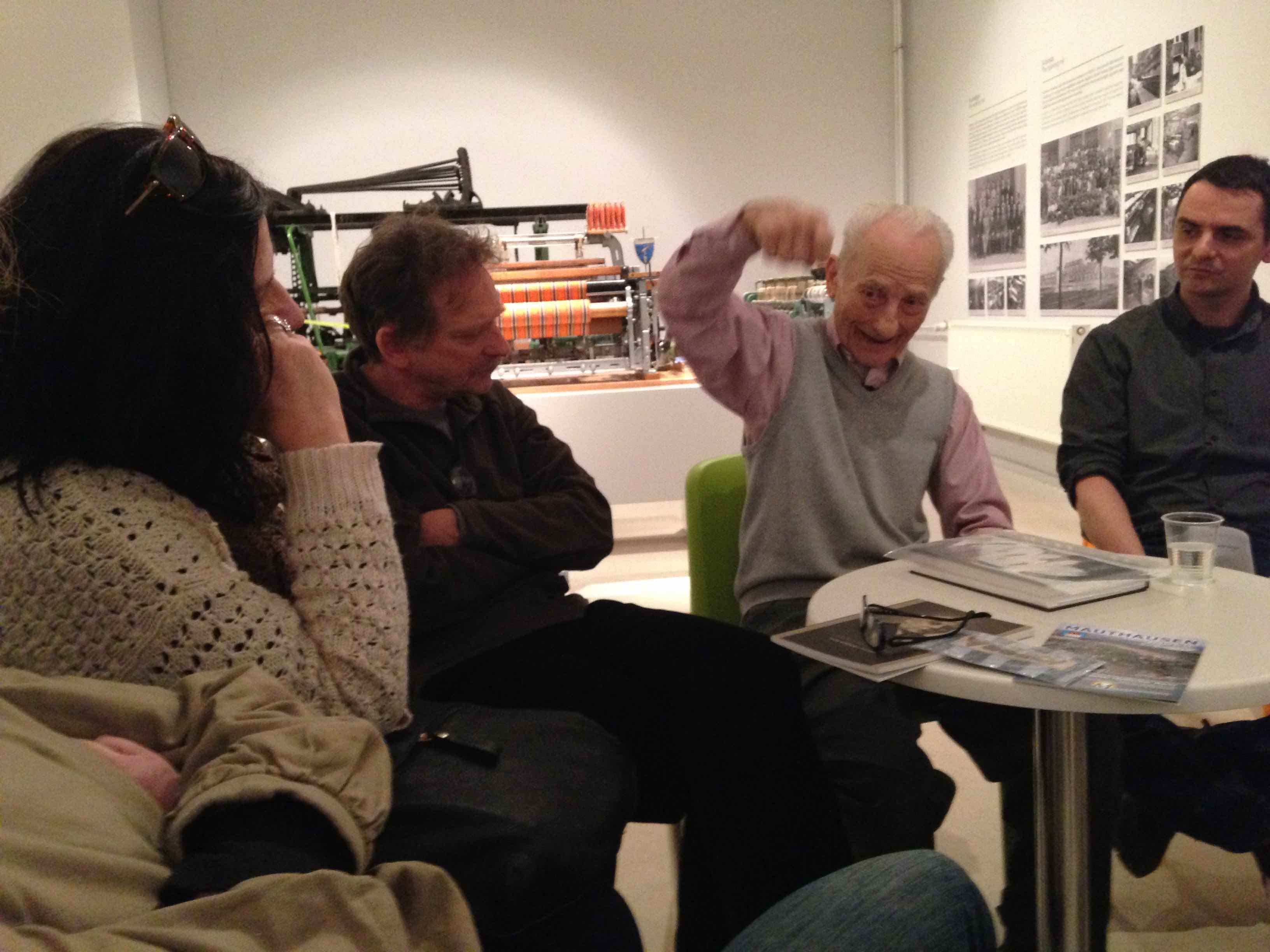 A Hungarian-language biography of Goldberger by Ildikó Guba is available at the Textile Museum.