The documents donated to Blinken OSA Archives by a former colleague of the BBC Hungarian Services have been processed and the finding aids are now available in our catalog.

The documents were created and collected by the donor who worked as an editor and researcher in the 1980s. As a university student, Péter Pallai took part in the 1956 Hungarian revolution, and shortly afterwards he fled to London, where he became a correspondent for the Hungarian Program of the BBC, and worked there for nearly four decades. Pallai collected his own and his colleagues' notes and transcripts, especially the ones related to the post WWII period and to the events of the 1956 revolution. This donation consists of four series, of which two contain background materials and transcripts for BBC radio programs and a chronologically arranged collection of British press clippings as well as interviews made with politicians and diplomats. The last two series includes diplomatic messages of the British Foreign Office and the US Department of State related to Hungary.

The first series entitled Interviews and Research Documentation on Soviet Influence, the Emergence of the One-Party System and the Events Preceding the Uprising in 1956 in Hungary mainly consists of interviews made with politicians of the Social Democratic Party, the Smallholders Party, as well as the Hungarian Worker’s Party on the political events from the interwar period to the Hungarian revolution and its aftermath. Pallai`s main research topics were the communist takeover in Hungary, the emerging Soviet influence and the events leading to the uprising in 1956. With co-author Mátyás Sárközi, Pallai published two books on these topics in 2006 and 2008: On the Wavelength of Freedom - The Story of the 1956 Revolution Told by the BBC and From Some Democracy to People's Democracy (1945-1948) [available only in Hungarian].

The archival series entitled Documents on the Situation of Hungary during the Second World War and After from the BBC Written Archives and British Press Publications contains background materials and transcripts of BBC programs, among others, the daily Press Review. This series contains both English and Hungarian transcripts, reports, drafts and other background materials for broadcasts of the BBC Hungarian Service as well as a chronological collection of articles from the British press and reports about Hungarian politics. A part of the material focuses on broadcasts about the 1956 events. The collection includes two transcripts of the BBC‘s European Service Broadcast programs in June 1957, focusing on the U.N. Special Committee's Resolution on Hungary. The series also contains two short interviews made in 1982 with members of the Polish underground movement, Adolf Pilch and Mieczysław Mlotek.

[Guidelines for Everyday Life in Great Britain: This document was created in late 1956 and was distributed by the Women`s Voluntary Service for Civil Defense on behalf of the Hungarian Relief Committee. The item can be found in the second series of the collection. The leaflet carefully explains how to behave on the streets of London, how public transportation works and it introduces readers to everyday customs, cuisine and other details.] 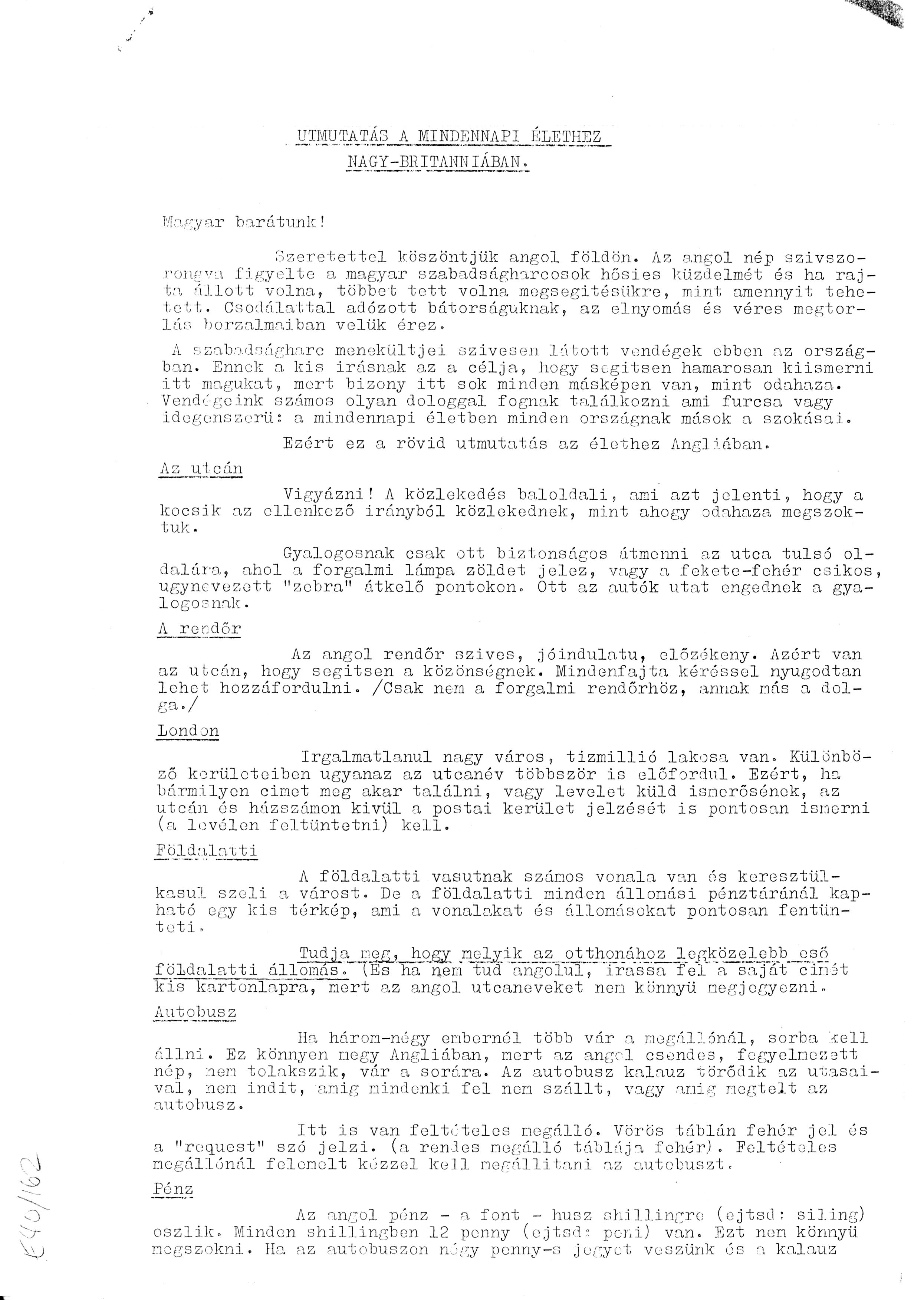 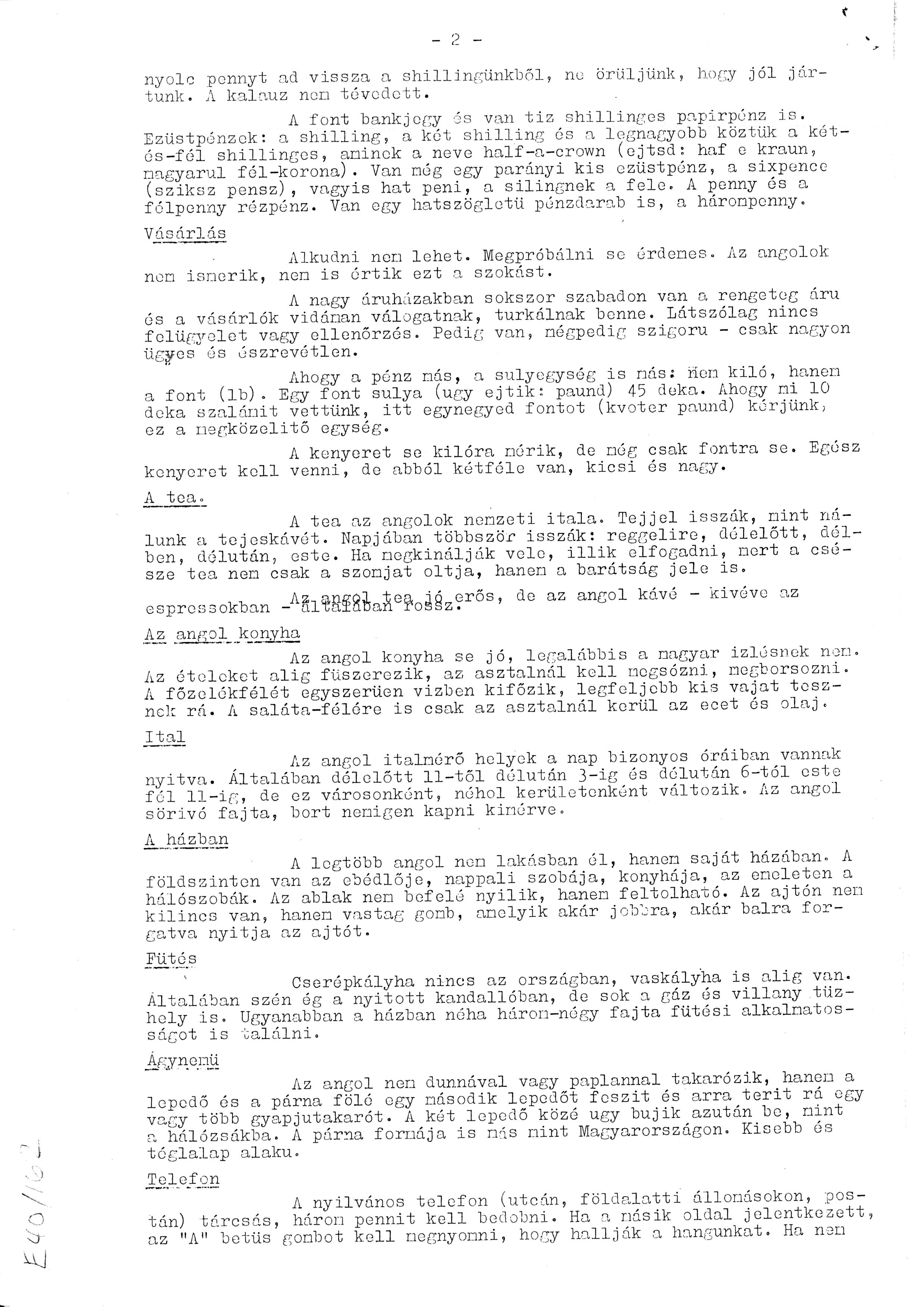 The second half of the collection encompasses declassified materials created by the British Foreign Office and the US State Department. Most of these rather informally worded diplomatic messages were classified for 30 years prior to being acquired by the donor.

The series Correspondence of the British Foreign Office on Eastern Europe between 1938 and 1956 contains three boxes of British diplomatic correspondence, created between 1938 and 1956 exchanged between the Foreign Office and different offices in Budapest, Belgrade and Istanbul, among others. These messages focus on the Hungarian events, but in some cases they provide insight into the background of the political events in the broader context of Eastern Europe. This part of the collection consists of mainly telegraphs and diplomatic reports dissecting the Hungarian wartime situation and the revolution. In addition, there are documents created by the Special Operation Executive`s office which operated during the Second World War to support sabotage and subversion and assist resistance groups in enemy occupied territory. As indicated by the original reference code ’HS4‘, these materials are related to the Eastern European wartime operations of the office. A dissertation on British Foreign Office Attitudes toward the Soviet Union in 1945 by Michael Burd is placed at the end of the series.

[Telegram from the series entitled Correspondence of the British Foreign Office on Eastern Europe between 1938 and 1966. The document was created on February 21, 1944] 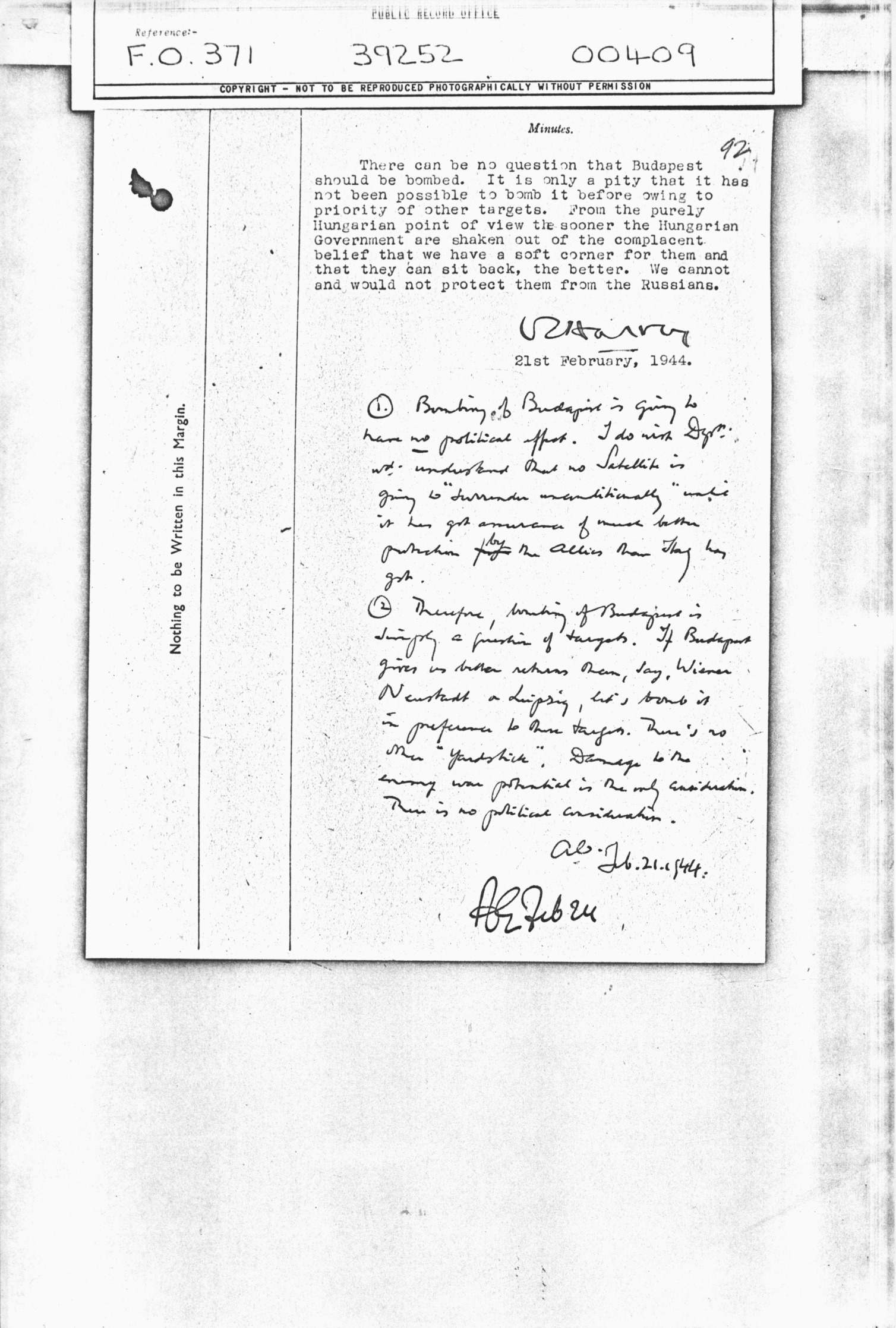 The last series entitled Correspondence of the US Department of State in 1946-1947 comprises some communication of the US Department of State during 1946-1947. The series focuses on three topics: the relations between Hungary, the Soviet Union and the Allied Control Commission; the visit of the Hungarian delegation led by Prime Minister Ferenc Nagy to the United States; the first Three-Year Economic Plan of Hungary.

The collection is available for research in the Reading Room of the Blinken OSA Archives.

In 2019 March OSA has launched an online curated collection on the year of regime change in Hungary. Among other newly acquired audio-visual materials, radio programs created by Péter Pallai also can be found.