November 4th, at the third event of the Secret Police Film Festival, organized by my Blinken Open Society Archives colleague, Zsuzsa Zádori, we watched 4 incredibly interesting films about the political and social situation in Poland in the late 1960s to mid-1970s. The first three were primarily about surveillance techniques used by the Polish secret police. In the first film, footage of the U.S. President Nixon’s visit to Poland is rolling, and in a monotonous tone, the narrator explains that at that we are seeing Nixon going to the crowds of Polish onlookers to shake their hands and greet them. The English subtitles read that the narrator goes on to say “this propaganda trick is often used by United States politicians and diplomats to create a sense of directness”. I laughed.

Having grown up in Canada, neither I, nor anyone in my family has ever lived in a state that surveyed its citizens in this way -the government keeping records of what I search for on Google just doesn’t feel like it counts in the same way. Because my only point of reference for state surveillance lies in spy movies, so the techniques being taught and discussed in these films reminded me of Austin Powers or Charlie’s Angels,the films came off as, at times, comical.

The final film screened truly showed the implications of governmental censorship and erasure. in Hear My Cry, Maciej Drygas told Ryszard Siwiec’s story. Siwiec was a Polish man who set himself on fire at the 1968 Polish Harvest Festival in protest against the Warsaw Pact invasion of Czechoslovakia. There were 100,000 people at the festival that year and somehow Siwiec’s protest, despite necessarily having been witnessed by at least some of the festival’s attendees, was stifled. It went almost entirely ignored. 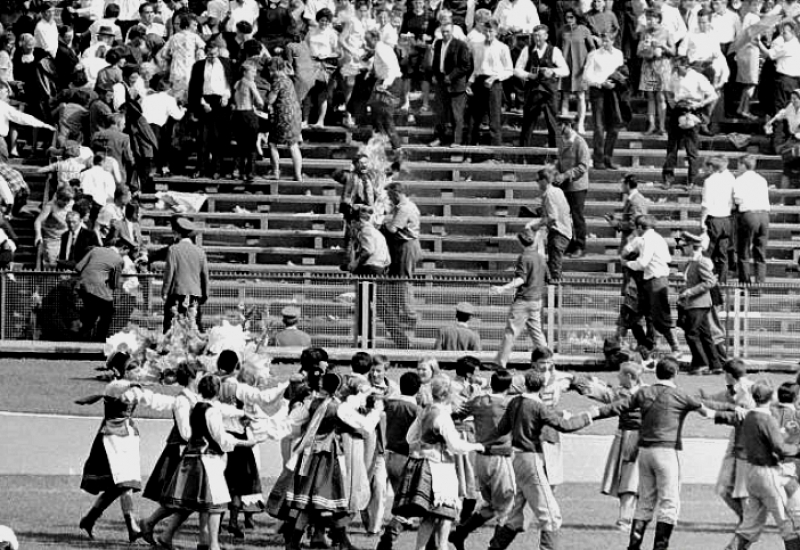 Soon after Siwiec’s protest, the state met with the security guards who helped him to the ambulance and told them that Siwiec should not be pitied because he was a madman and an enemy of the state. This polemic distorted the truth about Siwiec’s mental health and because of the censorship imposed on Poland’s media, the guards had no other way to understand Siwiec’s actions. One of the radio hosts for the 1968 Harvest festival said in his interview for the film, that at the time, he was unable to talk about Siwiec’s protest because he had his script and he needed to read it; that the protest didn’t go with the music and the dances and it made no sense to just bring it up; that he would have gotten into trouble. It is difficult to fault him because it is clear that unless he wanted to join Siwiec's revolution himself, he could not have done anything besides what he did.

The stories told about Siwiec by authorities at the time indicated that he had been drinking vodka and had lit himself on fire by accident, that he was simply crazy, even that he spontaneously combusted. Siwiec’s protest was censored out of the few photographs that captured it and his story was not recorded in the press. His protest was basically erased from the contemporary memory. Ironically, the only record of Siwiec’s protest is 7 seconds of footage recorded by the Polish propaganda tool, the Polish Film Chronicle. This footage was accidentally preserved and rediscovered 20 years later.

Drygas’ Hear My Cry illustrates one more example of the manner in which those with resources and influence can carefully manage the way that others understand the world to the point of obscuring it, through surveillance, censorship and erasure. Let’s not forget Siwiec’s story.