As the exhibition Faith – Trust – Secrecy is temporarily closed due to the coronavirus outbreak, the OSA blog will present segments of the show with links to the Hidden Galleries Digital Archive, where the featured stories and themes can be explored in more detail.
More on the exhibition from the OSA blog:
Replica of a Distorted Reality – Online exhibition tour 2
Toward a Visual Ethics of Secret Police Archives – Opening speech by the curatorJames Kapaló
Non-Scientific Momentums – The Zsuzsa Horváth collection at Blinken OSA

Forming part of the international Hidden Galleries project, the exhibition at Blinken OSA is about the ways in which Communist totalitarian states through secret police operations “captured” religion in images, graphics, texts and folders in order to control and eliminate those they deemed untrustworthy. Faith and trust are two of the central foundations of religious community but secrecy also represents a common feature of religions throughout history. The secret police, as their name suggests, depended on secrecy practices, whether real or simply performed, and as part of their undercover operations they sought to gain the trust of the communities they wished to infiltrate. Researchers of religion, both during Communism and today, also require the trust of the communities that they research and they practice their own forms of secrecy to protect the identity of research participants. 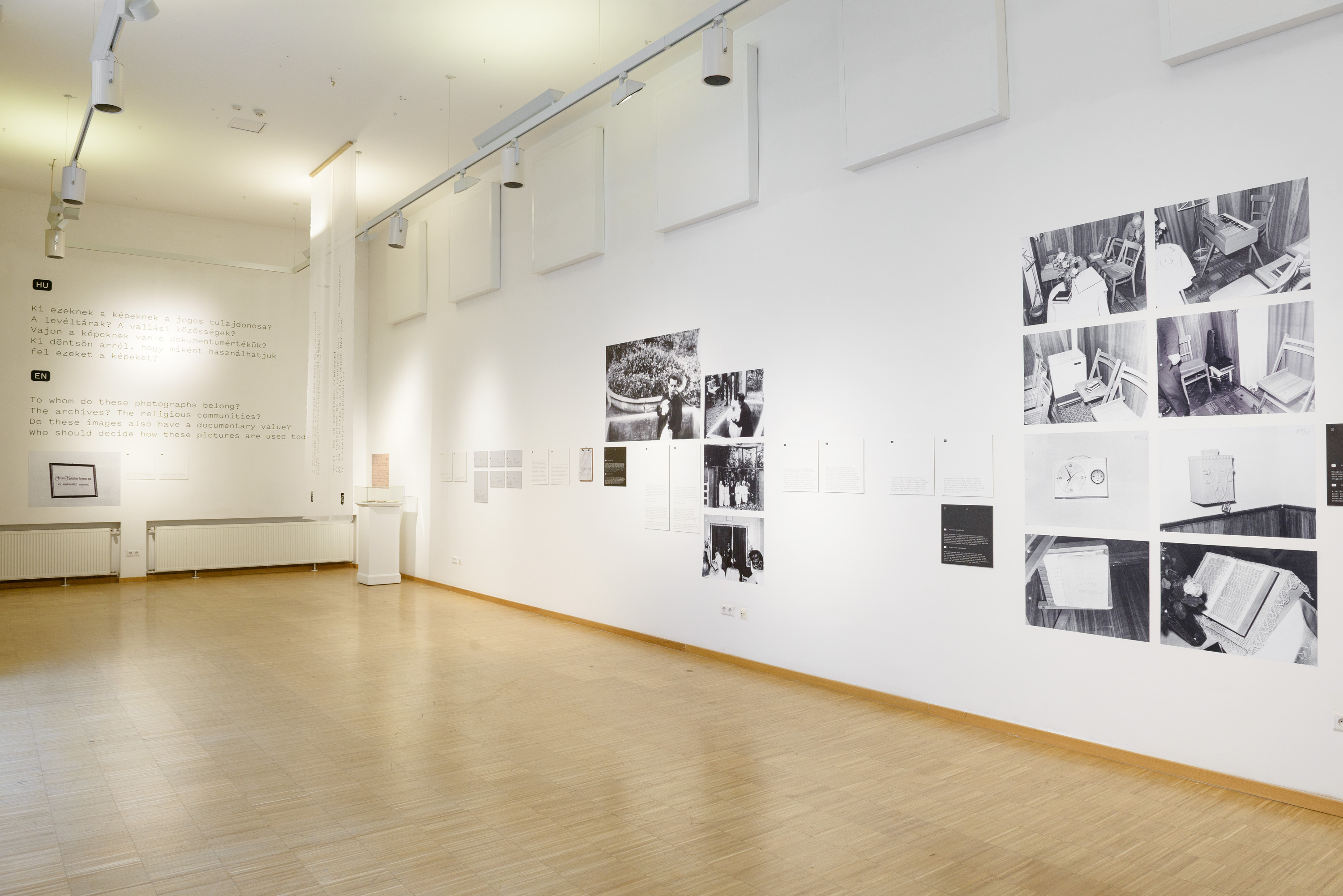 In order to escape the attention of the state and the eyes and ears of the secret police, some religious groups attempted to hide their activities. Based on documents discovered at the Historical Archives of the Hungarian State Security (ÁBTL), one section of the exhibition Faith – Trust – Secrecy reconstructs a secret police action aimed at a Pentecostal community in Budapest-Pesterzsébet. The members of the community were under surveillance, the leader of the community was shadowed. A house raid was conducted based on an anonymous note. The images and materials presented here were all confiscated or created by the secret police during the house raid in 1972.

To whom do these photographs belong? The archives? The religious communities?
Do these images also have a documentary value?
Who should decide how these pictures are used today 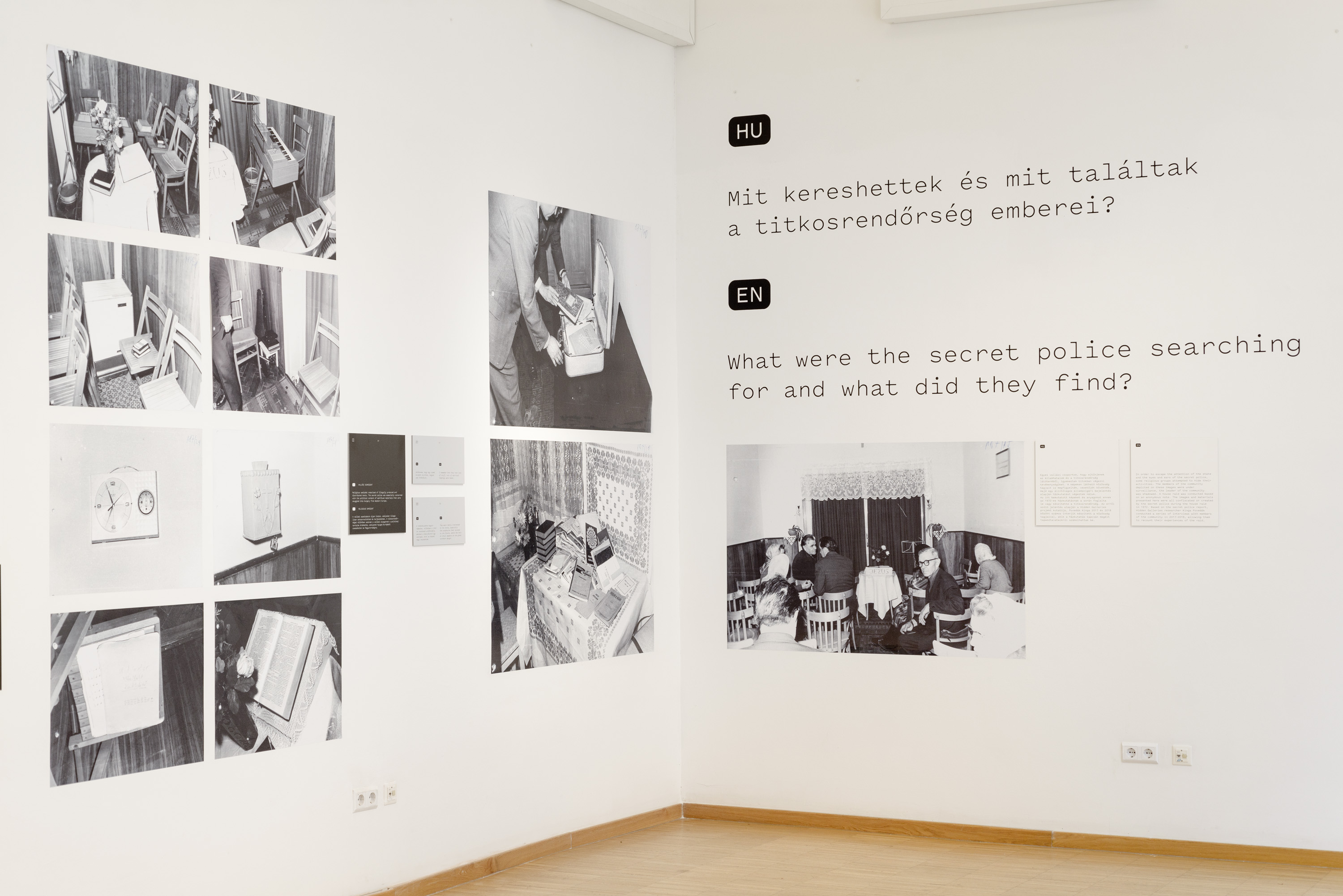 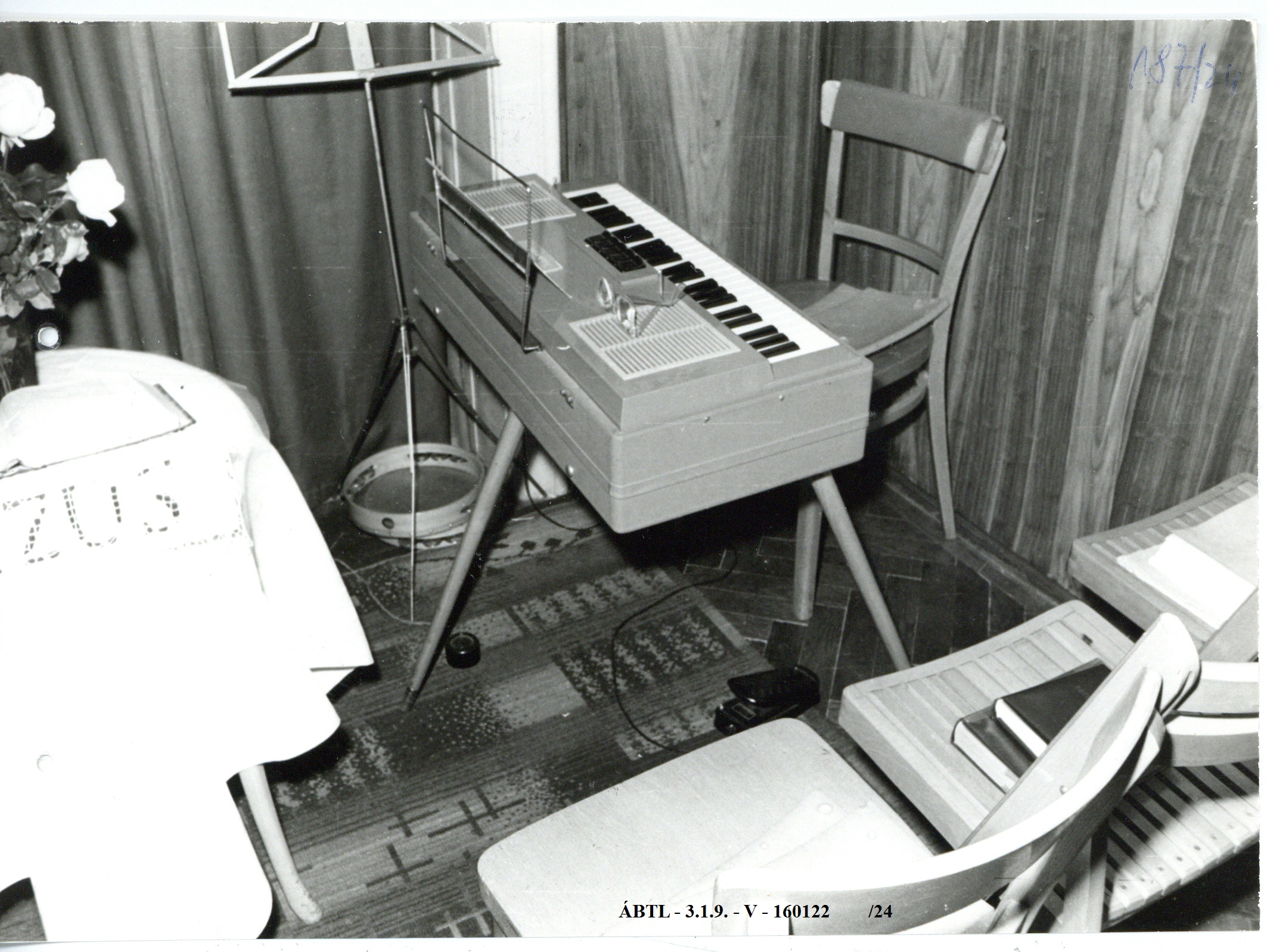 Crime scene photographs were taken in line with the norms of crime scene photography, and were designed to record the environment, context, and circumstances of the crime for use as data for investigations and as evidence in the courts. The intention of the secret police was to collect evidence for the supposed crimes of the community. These photos capture the members of the community, new chairs, an electric organ, and a collection box. They suggest that the secret police had a deep interest in finding out how the pastor, József Németh was able to make a living only on the donations of the community, without having a civil job; and also in how the community could afford such a modern electric organ and new furniture. 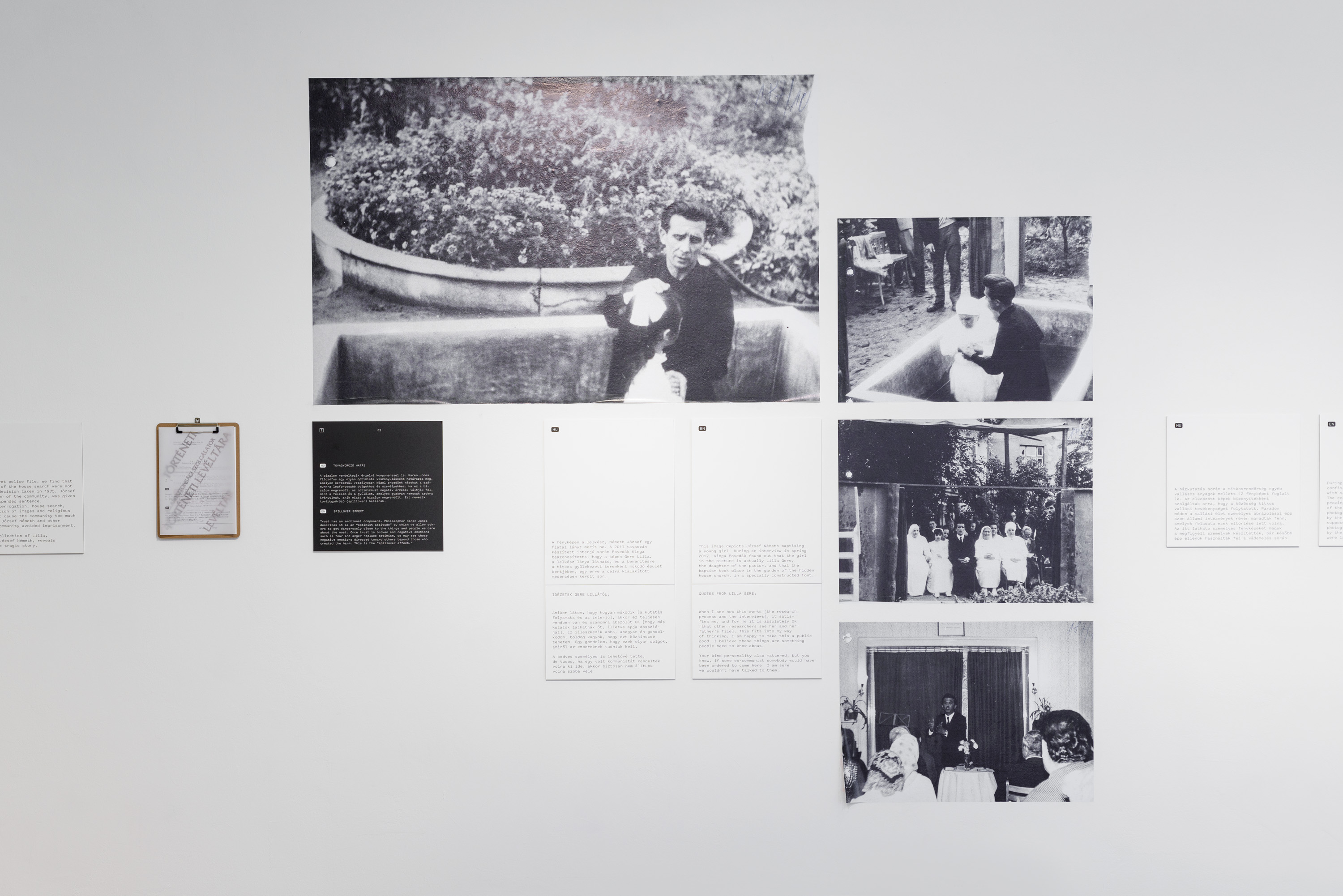 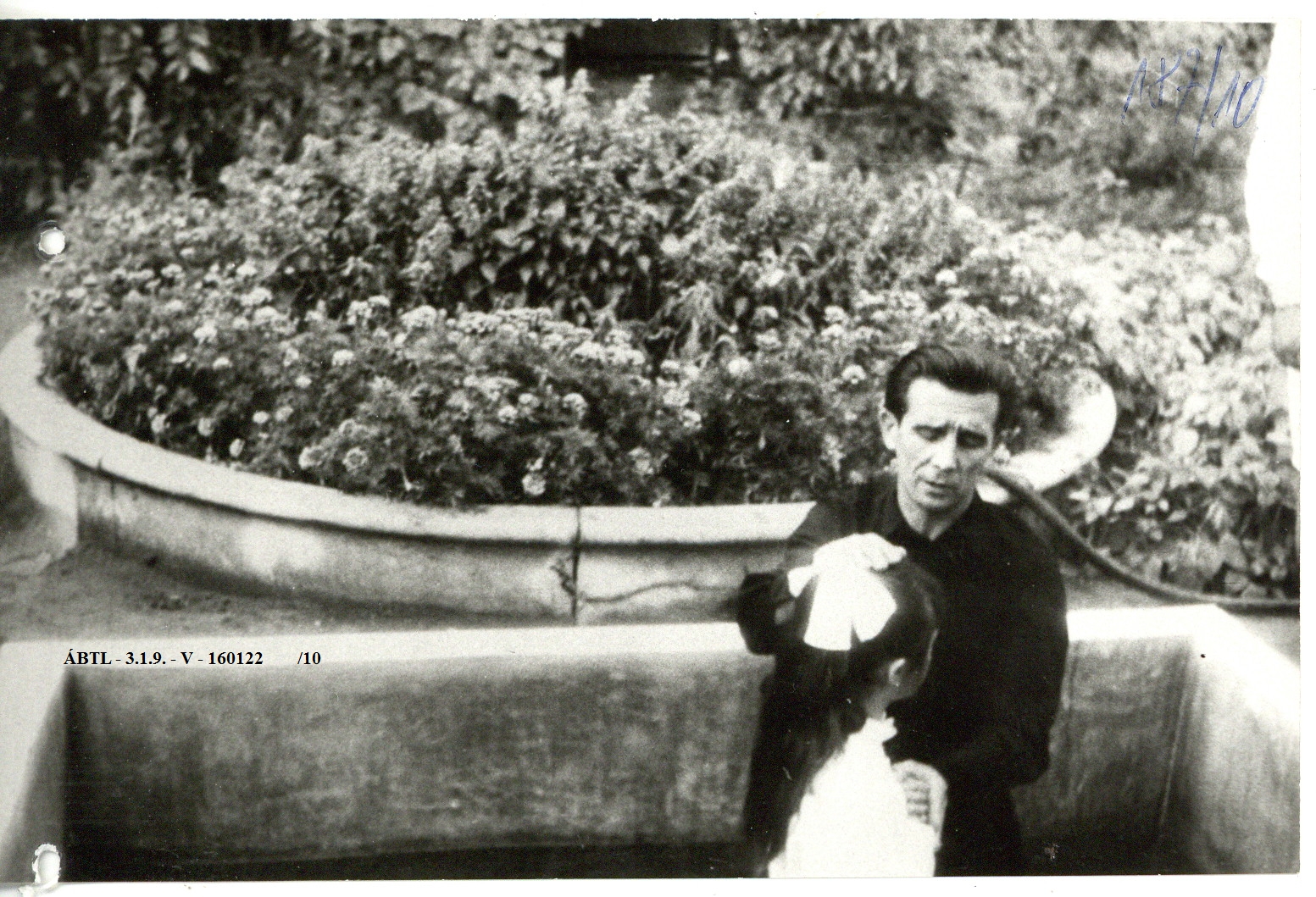 During the raid, the secret police confiscated 12 images altogether, along with several other religious materials. The confiscated images served as evidence proving the secret religious activities of the group.

The photo of a baptism depicts József Németh baptising a young girl. During an interview in spring 2017, Hidden Galleries researcher Kinga Povedák found out that the girl in the picture is actually Lilla Gere, the daughter of the pastor, and that the baptism took place in the garden of the hidden house church, in a specially constructed font. 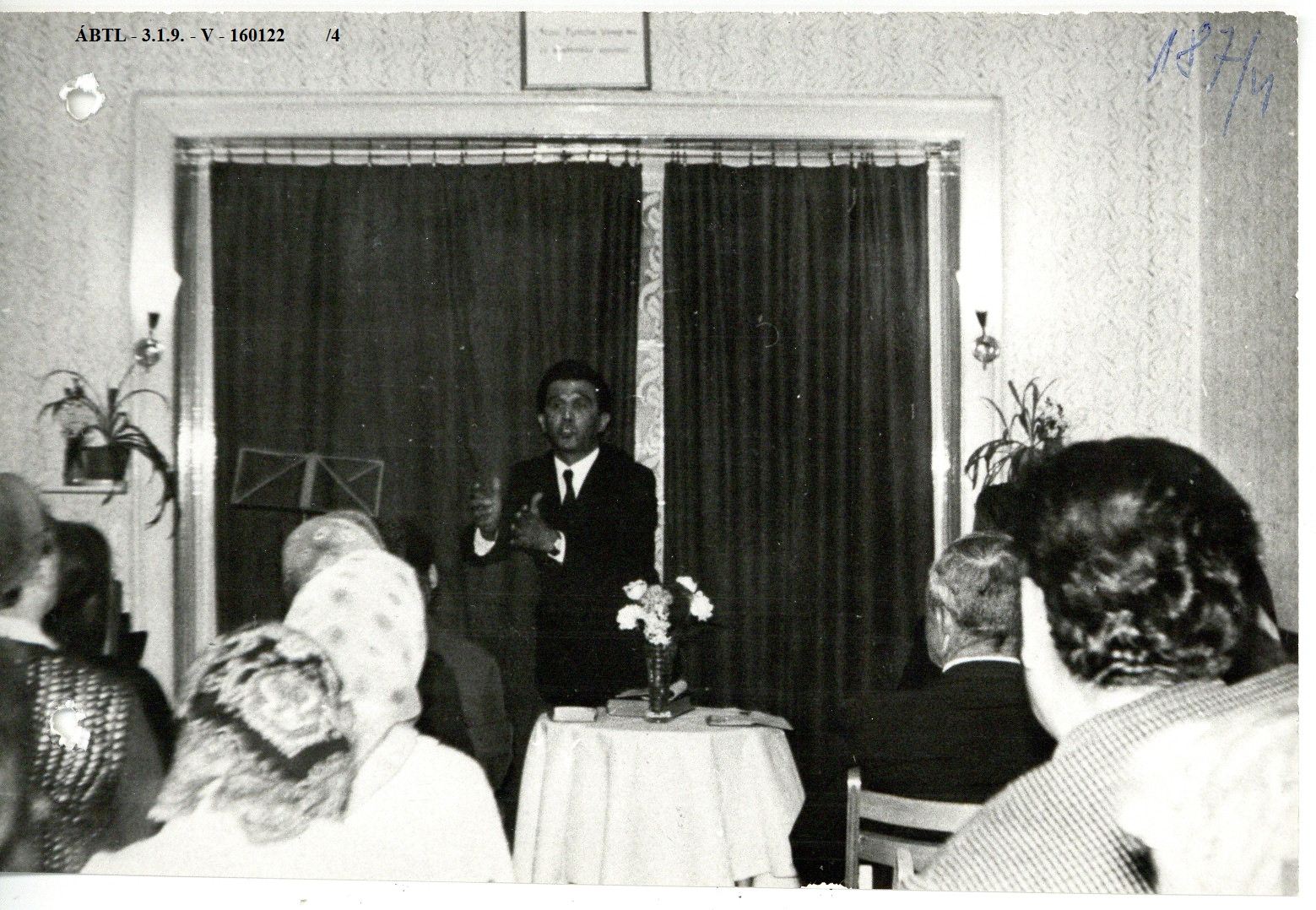 Based on the secret police file, we find that the consequences of the house search were not serious. On the decision taken in 1975, József Németh, the pastor of the community, was given a three-month suspended sentence. Surveillance, interrogation, house search, and the confiscation of images and religious materials did not cause the community too much trouble, as both József Németh and other members of the community avoided imprisonment. However, the recollections of Lilla, the daughter of József Németh, reveals a different, more tragic story:

“It was a terrible feeling, how they searched and ruined everything, and the brutal way they did so.”

“When he left in the morning for interrogations, we did not know if he would come home at all.”

“He was an electrician by training, and he could not return to his profession, he didn’t get a job anywhere.”

“This was a very difficult time for us. We lived our everyday lives in a very sad way. We knew that they were watching us, a police car was in front of our house very often. I was often accompanied by them to my school.”