Author(s):
Miklós Zsámboki
Tweet
Forrás. [Source., or Boiling point] is a blog series by the Blinken OSA staff at the Hungarian news website 444.hu. This is a translation of the blog post that originally appeared on osaarchivum.444.hu, on the occasion of the inauguration of Joe Biden as the 46th US President. 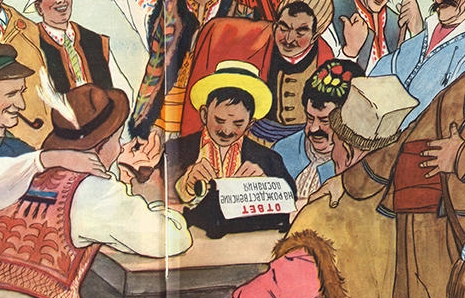 “The US President and the Secretary of State allow themselves too much when they try to interfere in our country's domestic affairs. . . . The years when it was possible to oversee the affairs of small countries in a Capitalist stlye, through statements, are over. We don't need good advice from the President, we are well off without it,”

voiced a January 3, 1956 report by the Hungarian state news agency the indignation of workers at the Steel and Tube Factory and the Láng Machine Factory. According to the absurd article, the workers assembled before their shift “to discuss the daily press reaction to the provocative statements the US President and the Secretary of State made, a crude interference in domestic affairs.” 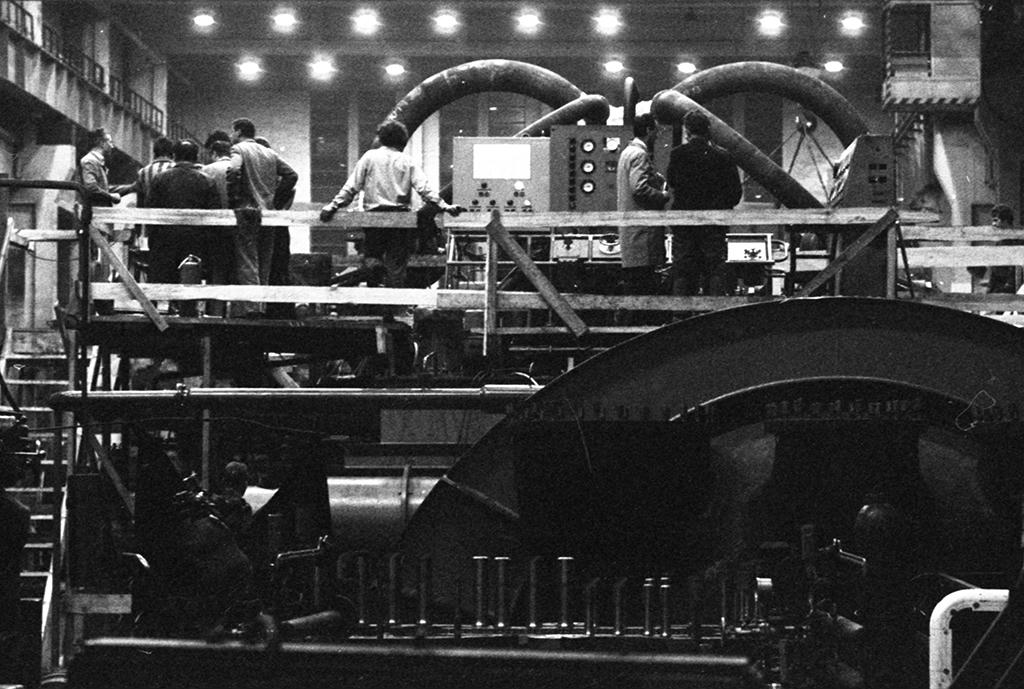 “The US Is Concerned”

The “crude interference” was committed by Dwight D. Eisenhower, who had sent a Christmas Message to the “captive nations” of Eastern Europe. The message, translated into the languages of the Eastern Bloc, was aired by Radio Free Europe (RFE). Launched more than five years earlier, RFE was a US Cold War instrument that received a budget as well as editorial policy guidance and instructions from Washington. According to these, informing the nations deprived of a free press should serve the peoples' self-determination and liberty, but not their liberation. This obscure strategy became subject to criticism following the 1956 Hungarian Revolution, as it was easy to understand it east of the Iron Curtain as encouragement, or even a promise of assistance. One year prior to the revolution, on December 24, 1955, the US President's radio message angering factory workers illustrates this ambiguity well:

“During the Christmas season, I want you to know that the American people recognize the trials under which you are suffering; join you in your concern for the restoration of individual freedoms and political liberty; and share your faith that right in the end will prevail to bring you once again among the free nations of the world.” (The Department of State bulletin)

With a minor linguistic twist, the message hints at the bringing back among the free nations without specifying by whom. Still, the speech must have been as meaningful to American voters reelecting Eisenhower the next year, as to the message's alleged addressees, the Eastern European listeners of Radio Free Europe. For the radio, of course, it was difficult to asses whether how listeners responded either to the President's message, or to their broadcast in general. The radio program was supported by the RFE Research Institute, which produced background material to help the radio's editorial teams in addressing events on the other side of the Iron Curtain. One major group of background materials was the so-called Information Items, comprising mainly summaries of conversations RFE personnel conducted with Eastern European citizens leaving, or Western citizens visiting Socialist countries, revolved around their impressions on general and specific issues. The staff was aware, of course, that such Items had a limited reliability and representativity, despite analysts' constant effort to verify incoming information.

The interviewee of Item No. 1698/56, an 18-year old student who escaped Hungary in January, 1956, was asked about President Eisenhower's Christmas message:

What this Item contains is, in fact, the interviewer's summary (1) of what the interviewee allegedly said during their conversation (2) in the name of the “oppressed nations” about Eisenhower's speech, about which he only had heard from a friend (3), who had heard about it from a friend (4). This reciprocated indirectness, or “distorted polyphony,” is typical of RFE Information Items. The content of such Items by itself can hardly be considered an authentic historical source, it becomes relevant when approached in the context of the above complex web of relations.

“He Should Come Here, and We'll Tell Him Face-to-Face”

Comparing the RFE Item to the state news agency report presented earlier, it becomes clear that the two are not that different. Although the situation the latter depicts—factory workers spontaneously, but in the presence of a journalist, debate international politics before their first shift of the year—is utterly unrealistic, the structure of the news piece is similar to that of the Item; a journalist's summary (1) of what factory workers allegedly said (2) in the name of “the working people” about Eisenhower's speech, about which they had learned from press releases and remarks (3) responding to the speech (4). 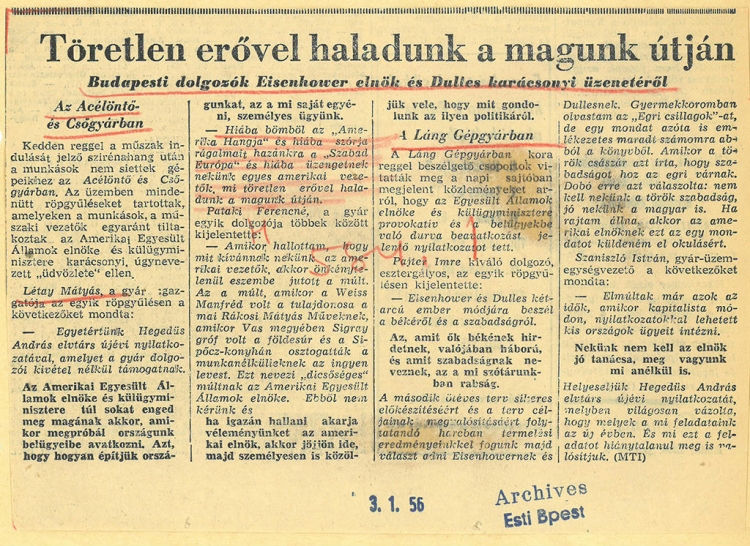 However, a fundamental difference between the two sources is that while the RFE Item, a background material known to be reliable only to a certain extent, was not intended for the public, the report on the factory workers was issued by the Hungarian state news agency, and published in Esti Budapest, the daily of the Budapest Committee of the Party, as factual. Therefore, while we can presume that the young refugee voiced his personal and honest opinion in the private conversation, the factory workers echoing political statements were parts of a public, centralized propaganda campaign.

The RFE Research Institute provided another major group of background materials, based on the monitoring of centralized state media of the Eastern Bloc. Word-by-word transcripts of state radio broadcasts and clippings of the official press were arranged into Subject Files, which were completed with research papers. As a result of this effort, for example, an Item refers to a 1956 cartoon published in the Soviet satirical magazine Krokodil. The caricature depicts a figure typing on a typewriter “Answer to the Christmas Message,” surrounded by, according to the caption, “the peoples in the various socialist countries,” who (wearing folk costumes!) “reject with contempt the »Christmas Message.«” An adaptation of Repin's well-known painting Reply of the Zaporozhian Cossacks, the cartoon was so realistic, it became subject to the very mechanism it had been intended to make fun of, and was republished by Romanian and Bulgarian magazines. 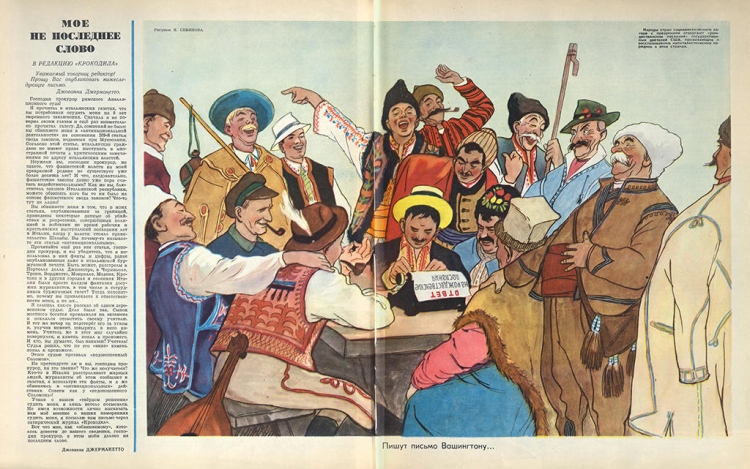 “Send Message to Washington...” The caricature from the 1956, No. 3 issue of Krokodil.
(Blinken OSA Library)

With regard to the state media of Hungary, RFE analyst Aurél Bereznai arrived at a similar conclusion. “Based on what appeared in the Budapest press, the regime apparently launched a far-reaching propaganda campaign,” he remarked in a five-page long report reviewing articles from the official press. To justify his claim, he pointed to the fact that Eisenhower's radio message was aired on December 24, yet the first response in Hungary was published only on December 31, after which reactions became everyday, extensive, and contentwise coordinated. Bereznai suggests that the Hungarian state may have intended, initially, to keep silent on the matter, yet, as Khrushchev replied to Eisenhower in his December 27 speech, about which the Hungarian had to report, they also had to reflect on Eisenhower's speech as well. Thus, delayed by a week, protesting the “crude interference” became unavoidable. According to Bereznai, however, from factory workers to journalists and to the Hungarian Prime Minister, objections were voiced in a campaign-like fashion; “Khrushchev's speech outlined the propaganda campaign's main narrative. . . . The weeklong silence, the careful cherrypicking of arguments, all indicate that the campaign was launched at Moscow's request.”