The book about Cold War broadcasting and Radio Free Europe remains to be written. Because of the unusual arrangement of such a Cold War operation, designed to provide truthful information to the countries beyond the Iron Curtain without having access to the reality on the ground, histories tend to be torn between an American side of the story and an Eastern European one. However informative or revealing they have been, until now publications on RFE have oscillated between the memorial accounts of the personnel and the “national” accounts by researchers who appropriate, case by case, the local imprints of the multilingual broadcasting. The hidden part of the story, about the networked nature of knowledge production, about the transnational management of information, remains to be investigated: it comprises the relationship between several research and broadcasting units, the daily intricacies of respecting guidelines while catering to different audiences, the manufacturing of truth through technology and political expertise, the complicated informational circuits which mingled migrants, double agents, letters, distorted signals…

One collection now accessible at Blinken OSA renders all these issue visible, in a very imagistic sense, through the selection of 1032 photos belonging to the Public Affairs Department of Radio Free Europe/ Radio Liberty. The complete collection is at the Hoover Institution Library and Archives and its catalogue can be accessed here. In a way, these are images that are still waiting for the proper story to be told, as potential book covers for a volatile but fascinating account. Although originally part of a PR campaign of self-advertisement after the radios were threatened with being dismantled in 1971, these photos now reveal a great deal about the complexity, scope and human-mechanistic entanglements of “truth-telling”. Secondly, they convey, in both a rhetorical and a visual manner, the ethos of Cold War operations engaged in the battle for minds and hearts. [From this ideological perspective, some of the images almost acquire a spectral dimension, like for example those of microphones or antennas.] One might have thought that these two aspects are irreconcilable, that photos of PR campaigns cannot be at the same time revealing and convincing, that they cannot document the real nature of Cold War news manufacturing and make ideological claims of propagandistic nature. 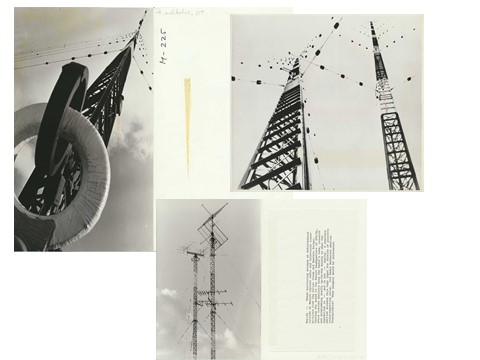 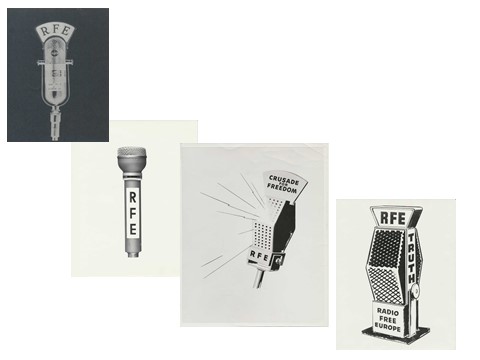 And yet they do constitute both an illustrative corpus and a political one and it is hard to discard them as belonging to the misleading genre of PR. The pictures about the workflow of news production (from incoming raw journalistic material to the final broadcast output) are indeed supposed to give the impression of a neat operation, aided by machines which, together with the organizational  schemes and architectural layouts, convey the idea of a procedural type of objectivity, able to correct the human biases involved in the process. However, they also reveal many things about the complexities of news production, about the infrastructural importance of such operations. Such Cold War broadcasting agencies had to supplant the  visual non-proximity to the phenomena they were reporting on with an extensive system of documentation, comprising, on the one hand,  monitoring and listening devices, teletypes, filing cabinets, libraries, and, on the other, technicians, secretaries, analysts and archivists. Rather than labeling such human-machine interaction as the wishful self-portrayal of Cold War soft power, one could actually see in it the implicit self-understanding of Cold War rationality. It was through a certain way of arranging technical devices and organizing the human interaction with them that truth was deemed to emerge smoothly.

For a radio station employing migrants and situated kilometers away from the Communist bloc (in Munich), technologies and devices were there to reduce noise and human error, but in what sense? A laboratory type of work (rather than simply a journalistic one) is revealed by the photos. Chemical metaphors suggest a process of distillation: large amounts of data are transformed into information through strictly controlled operational phases of production. One caption says that “1,500,000 words are boiled down to a running file of just 100,000 words” that moves around the units. Radio Free Europe could thus be viewed as part of a larger set of activities, partly scientific in nature, designed to make sense of the inaccessible Soviet bloc. This ideal type of Cold War rationality has been elaborated by Lorraine Daston, Paul Erickson and their collaborators in their 2013 book, How Reason almost Lost Its Mind. The Strange Career of Cold War Rationality. It basically comprises formalization and transversal generalizations, across contexts and issues. Some of its tenets can be traced visually in the RFE photos as well: the reduction of problems to typified events, a transversal way of dealing with topics across languages and cultures, a propensity for cramming issues into pre-designed thematic inventories, standardized working postures and attitudes. As in the case of their more mathematical counterparts employed by RAND, techniques were considered to be independent of the problems to which they would be applied and valid for whichever technician would work with them. 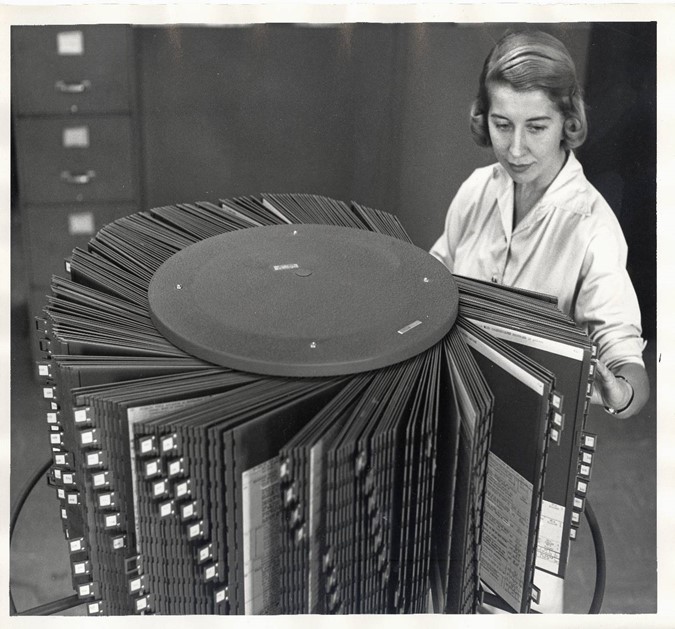 “One of the hundreds of scholars, students, researchers, journalists and professional writers who yearly take advantage of the wealth of information in the Research and Reference Section of the Free Europe Committee Library. The library contains more than 6000 book titles published in the Free World, and in the Communist countries, many of which are written in French, German and Russian, as well as in English. The archives contain more than 900 volumes of periodicals from Eastern Europe; newspapers dating back to 1950, a complete series of leading encyclopedias from all countries behind the Iron Curtain, atlases, bilingual and technical dictionaries, microfilms and a rare book collection.” RFE Public Affairs Photographic Files, Blinken OSA. 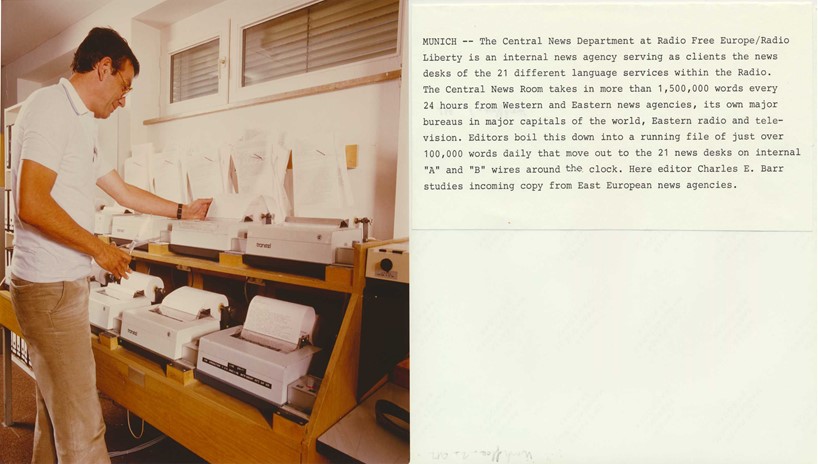 “The Central News Department at Radio Free Europe/ Radio Liberty is an internal news agency serving as clients the news desks of the 21 different language services within the radio. The Central News Room takes in more than 1,500,000 words every 24 hours from Western and Eastern news agencies, its own major bureaus in major capitals of the world, Eastern radio and televisions. Editors boil this down into a running file of just over 100,000 words daily that move out to the 21 desks on internal A and B wires around the clock.” RFE Public Affairs Photographic Files, Blinken OSA. 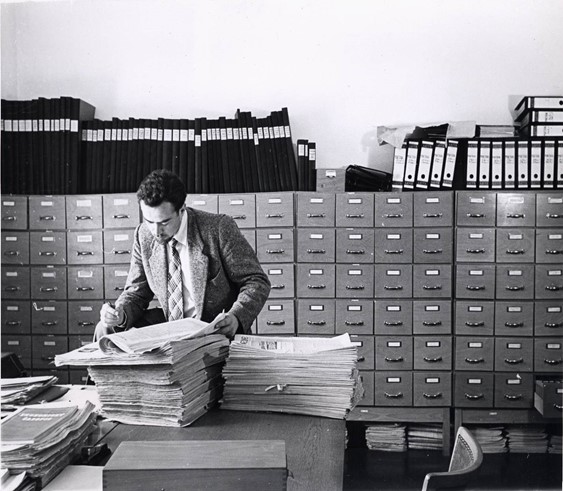 “RFE researcher checks new information against the record. The bank of filing cabinets which reaches from the wall through the eighth cabinet contains information on living conditions and individuals in Czechoslovakia.” RFE Public Affairs Photographic Files, Blinken OSA.

From this point of view, there are many similarities between the photos of RAND Corporation from approximately the same period and those of Radio Free Europe. RAND (short for “research and development”) was a think-tank originally established by the US Air force to assist decision-making in the realm of defense. It was very much a Cold War institution, created in 1948. One common feature seems to have been the management of politics at a distance, through mapping, modeling and downsizing.

Historians of RAND and Cold War broadcasting belong, nevertheless, to different camps.  RAND is the target of insightful investigations pertaining to the history of science, while RFE activities belong to the province of scholars interested in media or Cold War politics. That is why, perhaps, Cold War journalistic practices have been relegated either to the realm of ideological artifacts (that need to be de-constructed in contrast to their objective claims), or to that of [radio] propaganda. Following the current of linguistic turn and cultural studies, nowadays scholarship about Cold War radios approaches RFE’s output as an equally deceitful message, a mere discourse that was as strategic and biased as its socialist counterpart. 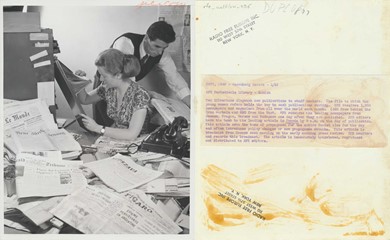 The librarians dispatch new information to staff members. The file to which the young woman refers holds the key to each publication routing. RFE receives 1,300 newspapers and magazines from all over the world each month. Radio Free Europe Photo collection, Blinken OSA.

The pictures of RFE do not only transgress the usual narrative about power/ politics and discourses as constructed artifacts; they also suggest different approaches with regards to Cold War broadcasting and their archives. First of all, the images invite researchers to write the history of those concerned with truth technologies on their own terms. Instead of debunking the radios’ ideals of objectivity (so ardently conveyed by the photos), researchers could rather investigate the hardships and problems of Cold War journalistic reporting. Analysts and journalists tried to yoke the specific and the general together, to raise awareness among people from different national backgrounds and to speak truthfully to the audiences at home. Secondly, the self-advertising images unwittingly embed their operations within larger knowledge-production practices whose consequences we still need to excavate. They also position the very archival collections of Blinken OSA within broader epistemic loops which cannot be reduced to the Cold War alone. They should not be seen as the irrelevant fossils of the past, but as parts of an emblematic matrix of conceiving topics now. To what extent do comparative analyses of Eastern European countries owe anything to a transversal way of looking at issues? To what extent is the comprehension of certain regional issues helped or hindered by serial embeddings within transnational frames? To what extent are histories of the Cold War reproducing the conceptual inventories from which they extract data? The photos should not be taken only as the radio station’s proclaimed objectivity, which should be challenged by debunking, deconstructivist accounts, but as visual cues about lingering informational and epistemic practices.