The Early Years of Central European University in Prague: A Book Review

The book can be divided into two main parts: in the first, the author - currently researching philanthropy and volunteering at the Department of Civil Society Studies at Charles University, Prague - clarifies certain terms (philanthropy, transnational, donation, regional, Central Europe, global), and describes the beginnings of CEU and of Prague College. In the second part, Pospíšilová - who formerly also studied sociology in Prague and at CEU's Department of International Relations and European Studies - describes the historical background through the example of the Sociology Department of Prague College: explaining how CEU, originally intended to operate at several locations, finally became "concentrated" in Budapest and moved towards being more of a global initiative rather than a regional intstitution. 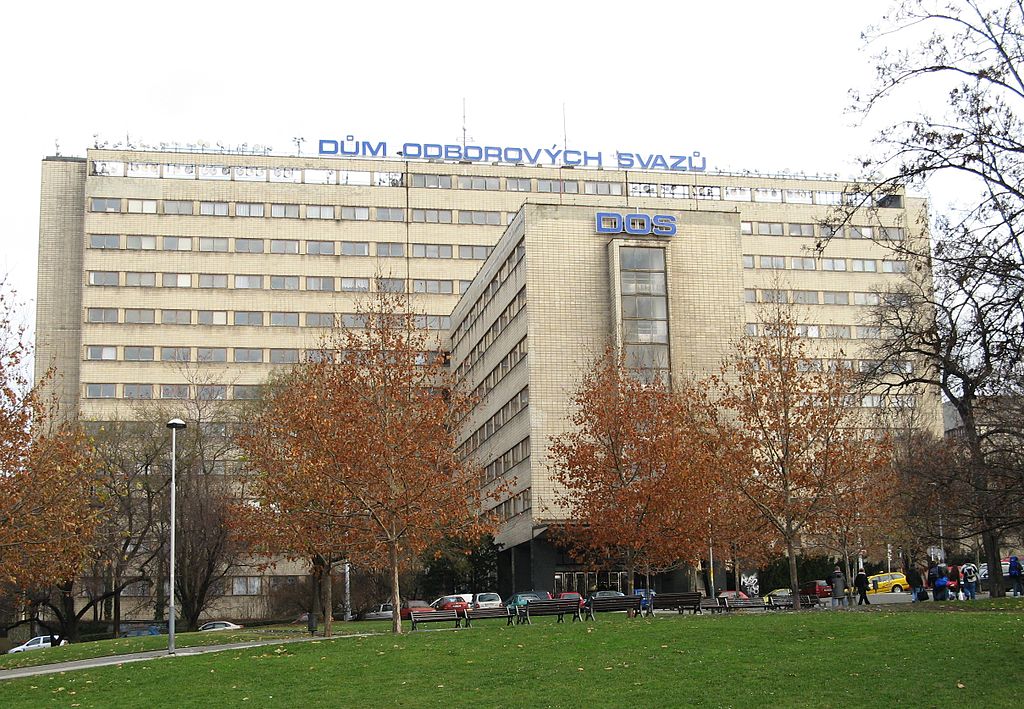 General Pension Institute, later the House of Trade Unions, the first home of CEU in Prague, designed by: Josef Havliček and Karel Honzik, 1929-1934

The "Hungarian line" reappears through the book: the founder George Soros' Hungarian background (his knowledge of the language and the culture, and his personal connection to the members of the political opposition of the 1980s in the country), as a detail  which – involuntarily –  contributed to the gradual erosion, then the closing of Prague College. She also discusses the Anglo- Saxon ties and their impact on Prague College in the early 1990s.

The author of this book is in search of an answer for why Prague College (and within this, the Department of Sociology, as the selected example), was not able to become an integral and functioning part of CEU being formed at the time, and why it also failed to become a part of the Prague academic scene.
Although an obvious explanation for these questions is not provided by the book,  it does put several facts in a more complex perspective, producing a more refined version of the widely quoted, simplifying myth stating that „that nasty Klaus chased CEU away from Prague".

Pospíšilová believes the following causes contributed to the fact that Prague College was not able to integrate:

1. During the "normalization" era following 1968, academic life – especially in the field of humanities –  became fragmented and professionally weak, so it would have had difficulty welcoming a modern, Western style, Anglo-Saxon type institution.

2. There were only few Czech/Slovak professionals in the field of humanities with the necessary language skills, modern knowledge and international contacts. There were not enough competent, respected tutors in the relevant fields employed at the Prague Campus who identified with the cause of this university. In the meantim, academic life in Hungary (despite the covert or open political aversion appering from time to time) welcomed CEU essentially as their "own" university.

3. It was not only the philanthropist and his entourage who were unaware of the conditions in Czechoslovakia, but the leaders, lead lecturers at Prague College who had arrived in Prague from the West did not know much about this either. (The only exception was Arnošt/Ernest Gellner.)

4.Though after 1990 neither Poland, nor Hungary possessed an institutional and legal system allowing a quick integration for CEU, still certain basic conditions (such as the presence and legal operation of the Open Society Foundation from 1984) were given in Hungary, while this was missing completely in Czechoslovakia.

5. The Czechoslovakian contacts of the founder, George Soros and of his entourage in the 1980s were limited to a few émigrés (primarily F. Janouch és K. Schwarzenberg) and organizations (Charta 77 Foundation). It would have been almost impossible to establish meaningful contacts with Czechoslovakia, an almost entirely isolated country at the time. Donations were direct and focused on a very limited circle; they had nothing to do with the "official" world, unlike in Hungary and Slovakia. In Czechoslovakia professionals in the field of humanities were technically banned from travelling to the West, members of the opposition were denied a passport even, their international experience was rather little, their sources of information remained limited until 1990.

6. The changing academic community after 1990 remained distant towards CEU being born, towards its institution in Prague, partly due to an aversion of Czechs to nationalism reseach. (This research project was lead - to his death - by Gellner, who had come from the Anglo-Saxon academic world but had Czech roots as well.) This aversion can be put down to the fact that the "German question", entirely unsolved in the 1990s was still considered as a taboo, and was also caused by the question of an independent Slovakia being on the agenda yet again.

7. While some of the country's leaders (Havel, Pithart) supported the idea of founding this university and encouraged its presence in Prague, following the regime change of 1992-93 dominant political players (not only Klaus!) were against the strengthening of the idea of an open society, beacause they considered this harmful to the „national development" in the country. The author also looks at how one of the cornerstones of Czech foreign policy of the time was a deliberate distancing of the country from „ the Danube region, so full of problems”. Aversions to the university were mainly manifested in the well known case of the building.

The book offers plenty of biographical, personal and professional details which make an interesting contribution to the study of the university's history. The author - due to her professional background – uses classic sociological methods instead of historical or political historical ones to present the causes which lead 25 years ago to the fact that CEU today has its headquarters in a single city and to the fact that it has become a global/cosmopolitan institution instead of a Central European, regional one.
Further reading from the same author: Transnational Philanthropy and Nationalism : The Early Years of Central European University, Monde(s) No. 6.