The Tender Powers of Culture 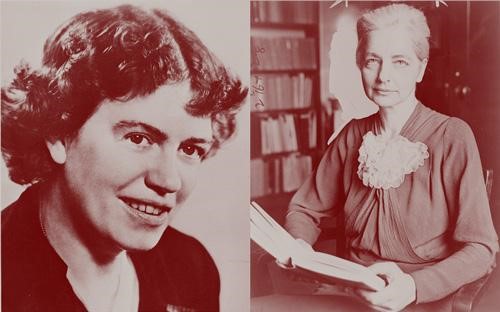 Cultural anthropologist Ruth Benedict was assigned to do a study of the Japanese character in June 1944 which happened to be the same moment of the US-led offensive against Japan.  Despite the fact that at that time Japan was considered to be the most alien enemy the United States had ever fought in an all-out struggle, a military or economic analysis would not have been enough. At stake was the understanding of Japanese habits of thought and emotions .

In comparison with her closest counterpart at that time, the cultural anthropologist Margaret Mead, Benedict was “more refined, sophisticated and gentle” [Fig.1].

Conversely, Mead apparently was brilliant yet aggressive (both descriptions are taken from Ezra F. Vogel introductory words of The Chrysanthemum and the Sword edition from 1989). Therefore, it is not a coincidence that out of the famous circle of Franz Boas’s disciples, Ruth Benedict was the one chosen to do the job. The fact that she had just been appointed head analyst at the overseas intelligence division of the Office of War Information could be of secondary importance. Her tenderness suited better the mission of decrypting the world’s most incomprehensible souls. The dual metaphor she choose for the ambiguities of such a psyche proved the point. The Japanese are a contradictory type of people who admire the beauty of the chrysanthemums and yet could fiercely use the sword. What Benedict suggested at the end of her study was inculcating in the Japanese minds Western ideas about freedom understood as free initiative (the chrysanthemums should not have wire racks) and responsibility (the sword should become a symbol of inner strength and conduct rather than outward violence).

In other words, to win the war against the Japanese was not a matter of a superior military strategy, but of convincing them about spiritual self-gardening in a Western way. By channeling their traditions along the acceptance of personal gratifications and the perfection of individual conduct they could become less belligerent. Global harmony was a matter of internalization of individual freedom in a reflexive, cosmopolitan way. Loosening self-restraint was even glorified as growing little corners of wilderness in one’s gardens, like potatoes instead of chrysanthemums.

There are enough reasons to believe that the cultural ways of waging wars with tender people and tender metaphors could be applied also to the Cold War. Tenderness should perhaps supplant the meaning of "soft". “Soft power” is a canonical term in Cold War literature referring to the range of techniques deployed to wage a war without having to physically fight. One of them was the focus on “Culture”, understood as both a flowing content of goods and as a prerequisite for spiritual self-cultivation and abstract freedom. Where politics did not seem a viable solution because of the reification of “ideologies”, culture became an all-inclusive system of comprehensive reality. Taking a cue from Benedict’s suggestions, one can assume that it meant spreading a Western cosmopolitan ethos or an aesthetic embrace of Culture while taking an active part in reshaping one’s own culture.

What triggered my thoughts about Benedict are the delicate traces of a Cold War cultural program that cultivated spirits. I am referring to the collection of the Fondation pour une Entraide Intellectuelle Européenne (European Foundation for Intellectual Cooperation), an organization that started in 1966 as an affiliate of the Congress of Cultural Freedom (CCF) in its mission to expose Eastern European non-conformist intellectuals to Western culture. Slightly diverging from CCF both institutionally (it became a self-standing institution between 1975-1991) and conceptually (it was supposed to be less politically engaged), FEIE nurtured the consolidation of contacts between East and West and thus apparently became an independent alternative in the form of a network of influential friendships.

The tenderness of human and scholarly attachments is what one first grasps when submerged into the documents related to the books program. While reading the requests for books written by Eastern European intellectuals in the 70s and 80s, I see the concrete functioning of a program destined to fight communism with culture; the lists of books that the readers from behind the Iron Culture were requesting (and not always getting) look like little corners/ gardens of indulgences, scholarly conduct and reverence at once. [They are different, in this sense, from the letters sent to another Cold War book program (see Alfred Reisch collection at OSA, http://osaarchivum.org/db/fa/312.htm ), which are institutionally framed (they address an anonymous organization) and therefore seem much more belligerent in mood (for example, one letter says: “we are in a very need of books showing us what life and world really are [...] we know almost nothing about democracies or human rights”)].

Graphological insights in the FEIE records reveal not just artistic temperaments, but careful self-taming in ensuring readability or adjusting to perceived and real limited-budgets. The naive (mis)spelling and the un-exercised choice of capital letters spell out efforts at communicating fragile desires [Fig. 2]. 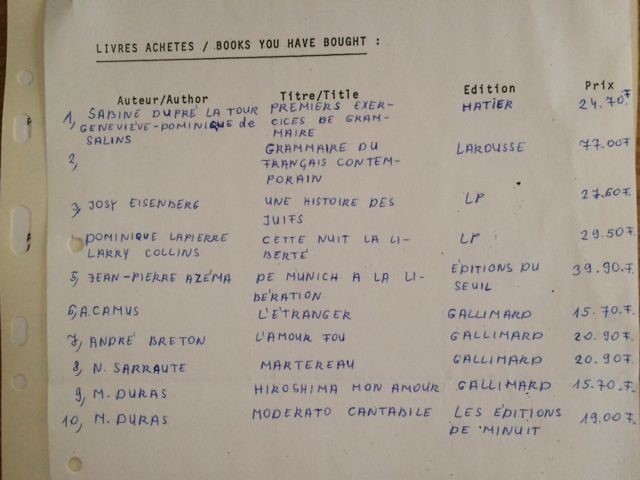 Lists are inter-spread or parsed with confessions addressed to Annette Laborey, the providential secretary of the program from the mid ‘70s. In bursting, diagonal lines, some mention not only the book shortages in their countries, but their allegiance to Annette. Profuse gratitude is accompanied by declarations disguised in poems. Annette seems to be the fairy that makes possible the trips to the West (an ideal in itself) and the arrival of magic books. The requested books are badly needed not necessarily because they are considered subversive, but because they would satisfy the curiosity of professional readers. Someone declaring himself to be a sociologist asked not only for books concerning techniques about public opinion surveys, but also something about “crimes” (then he deletes his option in favor of the strictly professional one). While architects asked only for books regarding architecture, economists seem more frivolous: one economist from Poland asked for Kundera and Philip Roth together with Alain Finkielkraut’s anti-relativistic stances from La defaite de la pensée [The Defeat of Thinking] [Fig.3]. 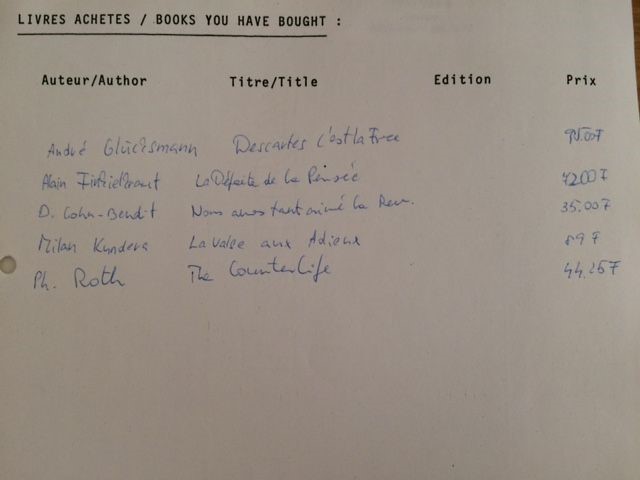 In the same vein, histories about Jews could stand together with Andre Breton's Amour fou [Crazy love]. One cultural animator would like to read about the legendary gallery-bookshop in Paris, La Hune (shut down this year, 2015, as a consequence of gentrification of Saint Germain-des-Prés). Teachers asked for dictionaries while confusing the orthography of “synonyms”. One secretive mediator (friends with Annette as well) wraps up her kind suggestions on paper templates with musical instruments on margins [Fig.4]. 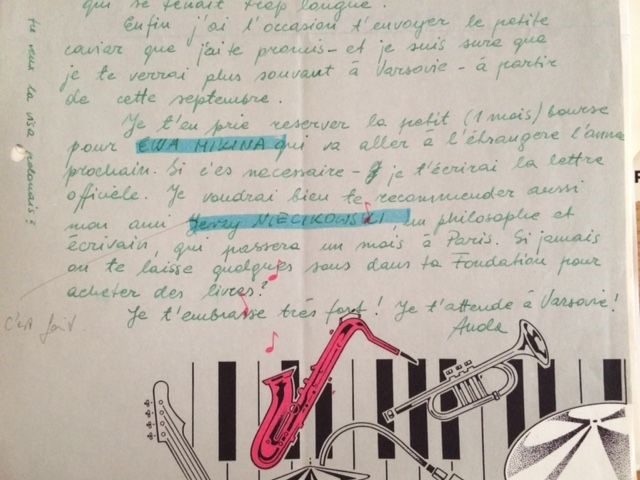 Romanians mostly ask for philosophical or phenomenological writings; Bulgarians for dictionaries; Hungarians about economic thinking or, if they are to be medievalist scholars, for Foucault's History of Sexuality .

A cultural world with all its uncertainties strives for stable universal referents while letting its sentimentalities loose; this is what emerges from the epistolary traces of FEIE. In a digital world, some of these clues would have been lost in favor of in-formative bibliographic inventories, retaining only names and titles and ready to be computed by engineer-scholars. Perhaps this loss of personal scriptural features would have also been in line with a simplifying story about books as Cold War, propaganda tools.  The analogue materials help us understand the tender , not just th e soft power of culture within the Cold War, hinting towards complex interactions and swords disguised in chrysanthemums.