The Touch of the Cold War: The Free Europe Committee Encrypted Telex Communication

After the fall of the communist regimes in Central and Eastern Europe, many archival materials were made available for researchers of the region. The impact of this “archival revolution” has not yet been completely measurable, as there are many documents  still waiting to be processed, to be made public, and interpreted by experts of various fields. Our new curated collection, “The Free Europe Committee Enxrypted Telex Communication" is made up of such “undiscovered” documents from Blinken OSA's holdings.

This collection consists of around 60 000 telex messages between Munich and New York, where two important Radio Free Europe/Radio Liberty institutions were located throughout the first twenty years of the Cold War. Since 2015 we have been working on the materials, and realized the importance of the dynamics of this transatlantic exchange through telex system, a literary day-to-day communication of the Free Europe Committee brains and Radio Free Europe local experts and journalists. While the Radio Free Europe/Radio Liberty Situation Reports and Background Reports, both available via Blinken OSA's website, cover regional and international analyses written by the employees of the Radio Free Europe/Radio Liberty, the new documents shed lights on the backstage dialogues: how those reports and analyses were read among the offices, dicussed by the interested parties, and used for their actual radio programs. These short, miscellaneous messages convey the touch of the Cold War reality to this day: speed of office communication, media circulation and varieties of informational resources, the relationship between the U.S. and Europe, and so on.

We believe that reading these telex communications enables researchers to understand the managerial capacities and difficulties of the Free Europe Committee and the Radio Free Europe braodcasting teams. But we need certain tips to approach these documents, as follows.

・First of all, as you see on the top left, the header shows the abbreviations of the institutions: either NYC or MUN, which indicate the sending institution(s). In this case, it is NYC, this is a message from the Free Europe Committee office in New York, and the Radio Free Europe office in Munich (MUN) would be the receiving institution. 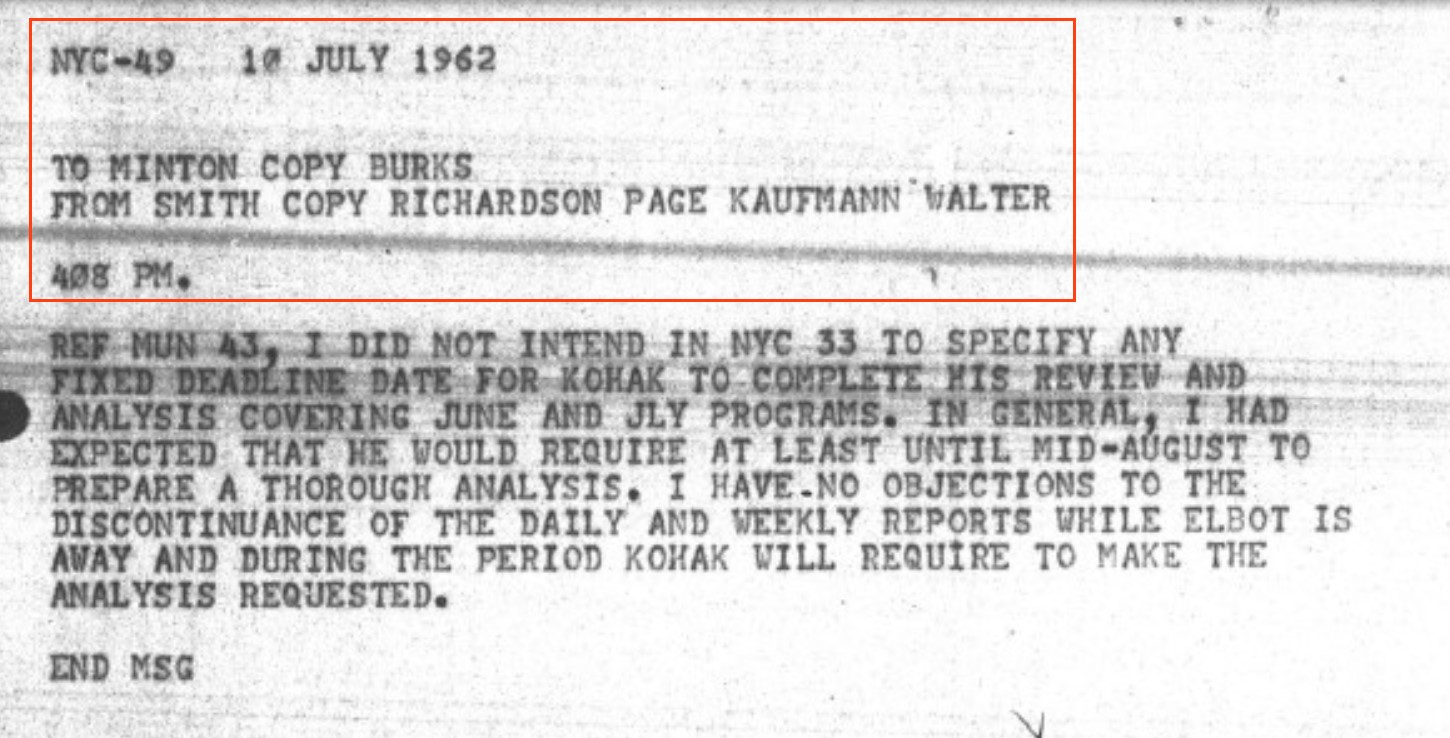 ・The following figure shows the number of messages in the given month and year. This is, for instance, the 49th message sent from the New York office during July 1962. The message was sent on July 10th, and even the exact time of reception is displayed: 4:08 p.m., New York time.

・Then, you can see who the sender and the receiver of the message was. In the above case it was sent from Minton (Robert W. Minton) to Smith (Rodney C. Smith), and copied to Burks (Richard V. Burks) and others, too.

・Also, it can be seen that this message was written as a response to the 43rd message sent by Munich of that month (as the paragraph starts with the reference of “RFE MUN 43”), in which the issue raised in the other message (“NYC-33”, the 33rd message of the month) was previously discussed. In short, the Free Europe Committee asked the Czechoslovak desk in Munich to rewrite their analysis and send it back to New York.

・From time to time, as in the image below, there are different headers like “EYES ONLY”, “URGENT”, and so. This shows a certain degree of the confidentiality of the message. Usually secretaries read out the messages, but when the “EYES ONLY” notice appeared, it indicated that these messages head to be read by the adressees themselves.

・They sent newspaper and journal excerpts, books and other materials by post. Telex was only used for their internal communication, as well as reminders of sending and receiving such materials to confirm mail services worked properly.

・Most of the telexes are only a paragraph long, but there are also lengthy messages coverning different issues, extensive analyses, some fresh news sources or excerpts from media reports or journals. Around the late 1960s, weekly or bi-weekly reports were written - by country and by topic - summing up the latest news.

Once you have a grasp of it, findig your way in the collection becomes easy: all you need to do is follow the conversations chronologically, or thematically. This collection is important because it shows small details of the work of Cold War agents, and it could also contribute to the “archival revolution” by opening the following aspects for future researches.

First and foremost, the collection enables us to have a closer look at how Cold War actors actually interacted. In a sense, through reading messages, we can analyze the creation of the  Cold War epistemic community which was made up of media organizations (radios, TV channels, and newspapers), intellectuals and experts (from universities and research institutes), and active information sources like the Radio Free Europe/Radio Liberty. The negotiations between New York and Munich tell us about how much this joint knowledge production was not at all monotounous, it sometimes resulted in misunderstandings and conflicts.

One of the frequent topics among the employees was recruitment for radio broadcasting and office work. Recruitment often came through personal connections and recommendations. The Free Europe Committee was keen on hiring young graduates from Ivy League universities, and conducted job interviews regularly with these people. In addition, they hired émigré journalists as regional experts to provide an insight into events happening in East and Central Europe.

The second approach for future research is related to its external aspect rather than the contents. In fact, the number of messages is impressive: there are more than 60,000 telex messages left. They seem to have exchanged 100-200 telex messages every month, every single day (except for holidays)  for more than two decades, so technical analyses are needed to show how the messages were related and distributed in terms of topics and regions.

Data analysts or digital humanists could make use of the numerous cross-references, as the activities of the FEC/RFE covered these issues almost all over the world. It is also interesting to estimate the efficacy of now out-of-date techonology, telex communication: it is surprising to see how quickly they responded to different situations.

Resonance and Synchronicity of World Politics 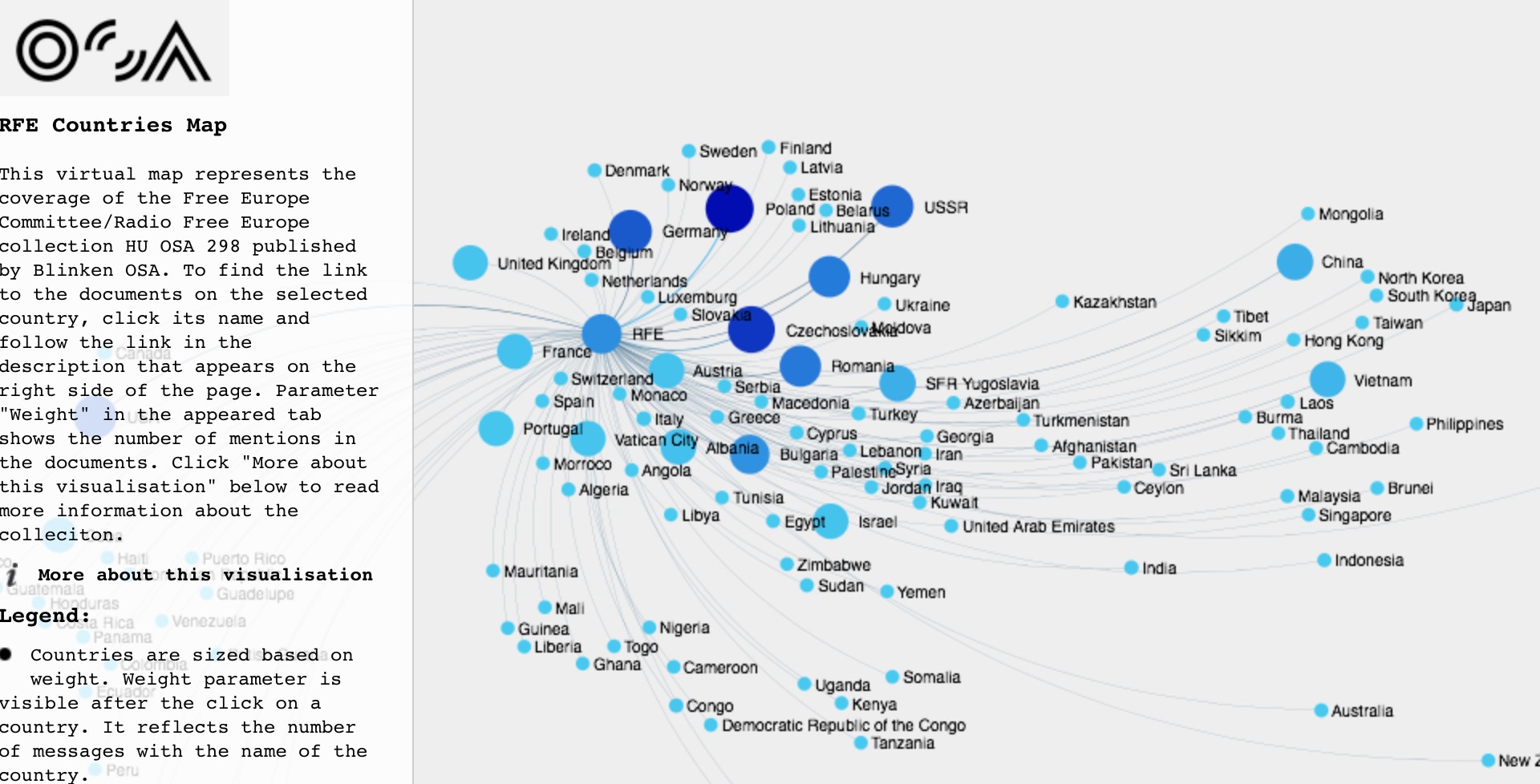 Last but not least, traditional social science approaches could also benefit from the collection. The telex messages capture the synchronycity of events during the Cold War. Several media outlets were analyzed simultaneously, and were categorized not only from an ideological point of view but the clarity and accuracy of information was also taken into careful consideration. It is intriguing to know how those experts saw certain historical events, with no definite knowledge of their consequences and of the magnitude of these events such as the Prague Spring of 1968.

The message sent three days after the Invasion of the Czechoslovak lands by the Warsaw Pact Army reported “an impassioned denunciation of the occupation and the occupiers”, written by Jan Procházka, the famous author. Some of the messages might not be full of “new facts”, but we can see day by day the development of journalistic, social and contemporary analyses of historical events.

All in all, the first wave of the archival revolution which came along with the fall of the Eastern Block is almost over, and it should be renewed on a different scale. As this collection is relatively new, we welcome scholarly uses of our materials, and feedbacks to improve our collections. 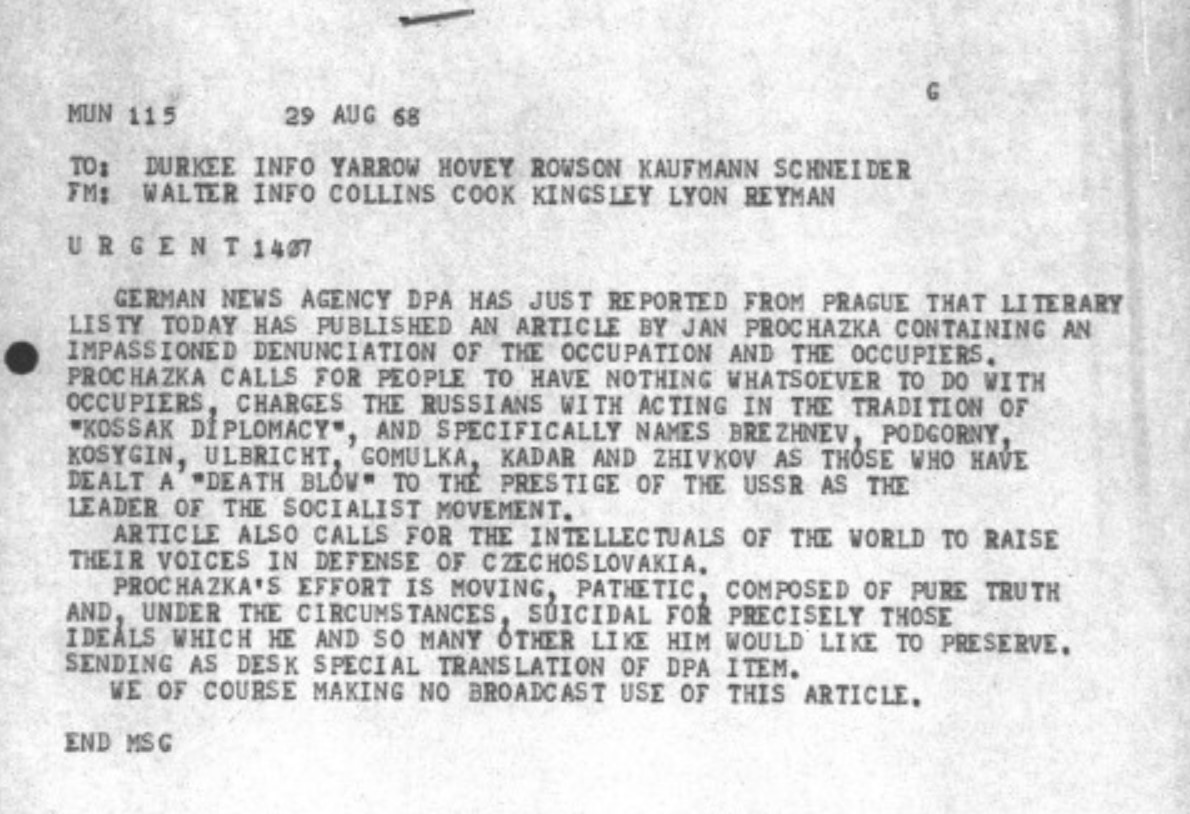