The Voice and Ears of America – Cold War Theater Collection

In the bipolar world emerged during the 1950s, the weaponless Cold War, obtaining information (also by the means of spying) and state propaganda gained extraordinary significance. While the US and the USSR had similar objectives (i.e., overcoming the other), their methods were more different. Mobilizing an enormous (and growing) budget, the US established the Radio Free Europe (RFE) to inform the nations of Eastern Bloc countries, firstly, about Western developments, be it political events, popular music, or the free and uncensored world in general, and secondly, about domestic issues not reported by the official press in those countries. RFE, however, not only mediated, but also gathered information; it was the voice of America, and at the same time her ears. For long, the latter mission remained top secret. As for the USSR, such attempts were less central; even if the German-, English-, and French-speaking programs of Radio Moscow, launched in 1929, served as models to the West.

Blinken OSA’s Cold War Theater Collection, now available online, comprises a selection from the Subject Files and Biographical Files RFE compiled on the theater life of Hungary between 1949 and 1993. The credibility of these documents is often questionable, which is a fact that cannot be stressed enough. Balázs Leposa’s post introducing the new collection originally appeared on Forrás. [Source., or Boiling point] in Hungarian. Forrás. is a blog series by the Blinken OSA staff at the Hungarian news website 444.hu. 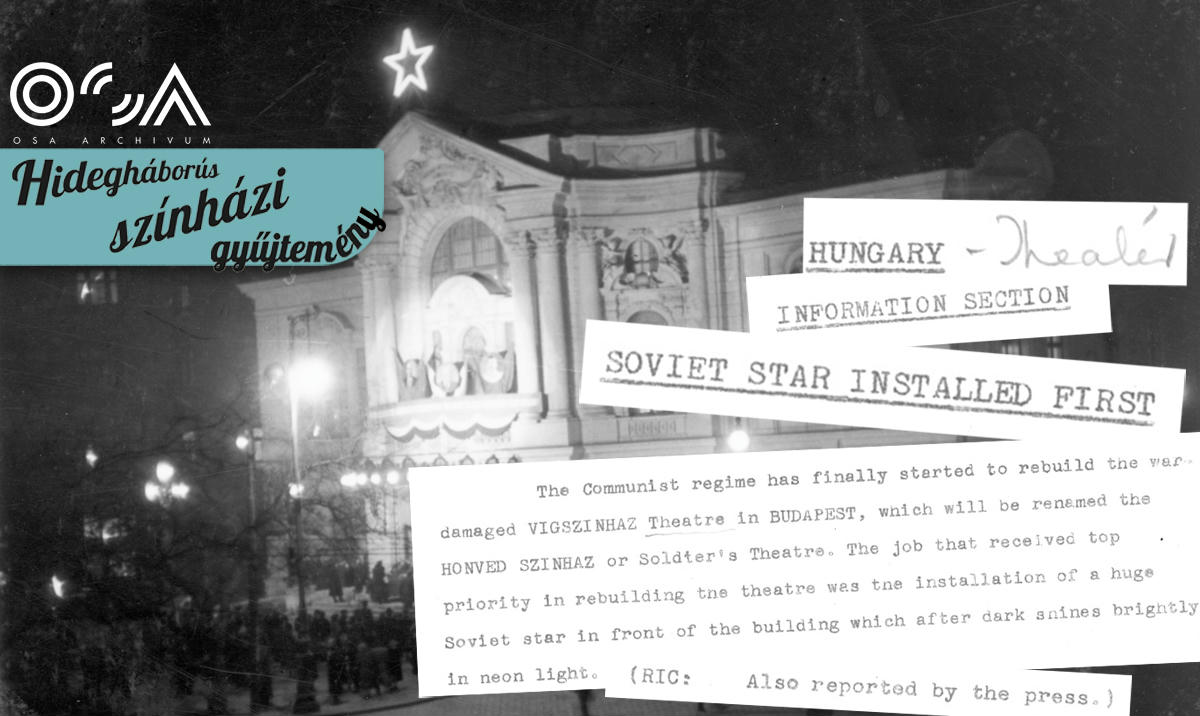 A cliché in theater history, that unlike literature or fine arts, the history of performance arts and especially that of theater are supposed to be written after products that are not available in retrospect. While literary works have been written down (often the manuscript is at hand), paintings and other subjects of the history of fine arts are preserved at museums and private galleries, a theater performance is unique, unreconstructible, unrecordable. Even if the latest technical innovations do come near to providing an illusion of original theater acts, still, video recordings, multicamera television broadcasts, or futuristic three-dimensional technology alter the viewer’s perspective, the collective notion of experiencing the performance and breathing together, the reality of seeing the actors’ bodies. Anyone seeing the same play several times would agree that successive performances may include fundamental differences. A recent event may charge a scene or a dialog with new, singular meanings, actors can get sick, the setting may collapse. Sitting in the first row, we may hear better, but at the same time be frustrated by actors’ closeness, or distracted by minor details on the stage... I could go on.

Therefore, the history of theater, especially the period preceding the emergence of film recording and television coverage during the 1960s, is mostly based on secondary sources and reports, i.e., interpretations. This feature of being indirect and mediated, by its nature, underlines the inadequacy of the terminology of the Cartesian view and historiography; if the theater performance is the objective reality, then the reviews on it are subjective expressions, which leaves us incapable of embracing the objective reality. We were not present; had we, we would not remember correctly; would we, we could not have recognized the essence; could we, the people sitting next to us certainly would have disagreed with it. With that said, facts on performances can be validated, actors’ or stage directors’ biographies can be written, the chronological series of performances can compose the history of a theater. In performance arts, a critical approach to sources, however, is more significant, than in the history writing of any other field. Knowledge on the context becomes more crucial, than the source itself. Now, allowing my theater historian identity to take the stage from the archivist, I’ll present a few examples from the Cold War Theater Collection, and add commentary elaborating the content of the records, also highlighting their factual mistakes.

Most probably, Katalin Karády was not a morphine addict, and it’s difficult to believe that someone who had been awarded the Righteous Among the Nations title by Yad Vashem for saving Jews, would hand over colleagues to the State Defense Department. Yet, the literature attacking her personality and legacy is extensive; throughout her career, she was subject to jealousy and hostility, with adversaries striving to discredit her both in Hungary and abroad even after her 1952 emigration. Rather than backing a moral judgement on Karády, the above document is a symbol for her life. We know that she was beaten by Nazis in 1944, that she was blackmailed by the State Defense Department 5–6 years later, and that she did not receive a visa to the US until 1968. The latter fact may be explained by the RFE Information Item published now in the collection, as the State Department, the CIA, or the immigration enforcement had, so to say, direct access to it at the New York office of RFE, a government-funded organization. Everyone can make their own conclusions.

The play Értünk harcoltak (They fought for us), staging Mátyás Rákosi’s years in the illegal Communist movement, premiered at the Young People’s Theater on June 3, 1950. For obvious reasons, the “anti-regime gesture” of overwriting the word “amnesty” with “gallows” on the play’s advertisements could not have been recorded in the State Socialist history of theater. Consequently, this may be its first account; the significance of the act should, however, be assessed in its original context.

Information Item on the reopening of the People's Theater, from the Cold War Theater Collection.
(HU OSA 300-7-1 RFE/RL US Office, Hungarian Subject Files)

Taking over the People’s Theater, destroyed during World War 2 and reopened in 1951 as the People’s Army Theater, carried a powerful message. Before the war, it used to be a sanctuary to the “bourgeois theater” advocated by Ferenc Molnár, its program and its audience embodying a representation of the interwar values of the Horthy regime; a symbol of reactionism, an antithesis to Sovietization. It was by no accident, that the reconstruction of the building started with the installation of a red star.

Révai's secret decree is self-explanatory; from a 21-century point of view, a self-parody of the totalitarian power’s narrative. In this case, the information acquired by RFE was correct; unlike the spelling of Révai’s name. It should be added that family names ending with a “i” or a “y” (pronounced mostly with the same [ɪ] in Hungarian) rarely had consistent writing. Even the name’s bearer was often unsure of the spelling, or it were them who at one point simply changed the “y,” suggesting nobility, into a “i,” as a noble lineage had unfavorable consequences in the 1950.

There is no mention of a Marietta Jankovich in the history of theater. Presumably, the Marietta Jankovich in this Information Item is actually Magda Jankovich. Such mistakes are relatively common in RFE reports, which may be explained by their origin; RFE acquired most of its intel from Hungarian refugees escaping to the West. Magda Jankovich later managed to defect, taking the path of an émigré, like Karády. In general, celebrity actresses of the Horthy era were sidelined, in accordance with the logic of Sovietization. Therefore, the report reinforces our take on the period today; it is factual, even if with minor inaccuracies.

Picked from the collection and commented based on our current knowledge, the above cases reveal the Cold War Theater Collection’s benefits, as well as its dangers. It provides insights, curiosities, even amusing details and additions to the Socialist chapter of theater history, yet it also carries false and inaccurate information. The latter fact must be taken into consideration even if we are well-aware that the history of Hungarian theater is, to a certain extent, constructed along gossips, partial information, and word-of-mouth anecdotes. This was among my motivations to publish these sources; their implementation, the conclusions made, the base of the following historical narrative should be easily accessible and thus verifiable. As a result, the narrative itself—in our case, that of theater history—will become more resistant to manipulation and falsification. That has become paramount, in an era of an unprecedented, global carnival of disinformation, and especially in a country where the government building its cultural hegemony patronizes local manipulation and symbolic conquest on the basis of an exclusive, appropriated ideology.