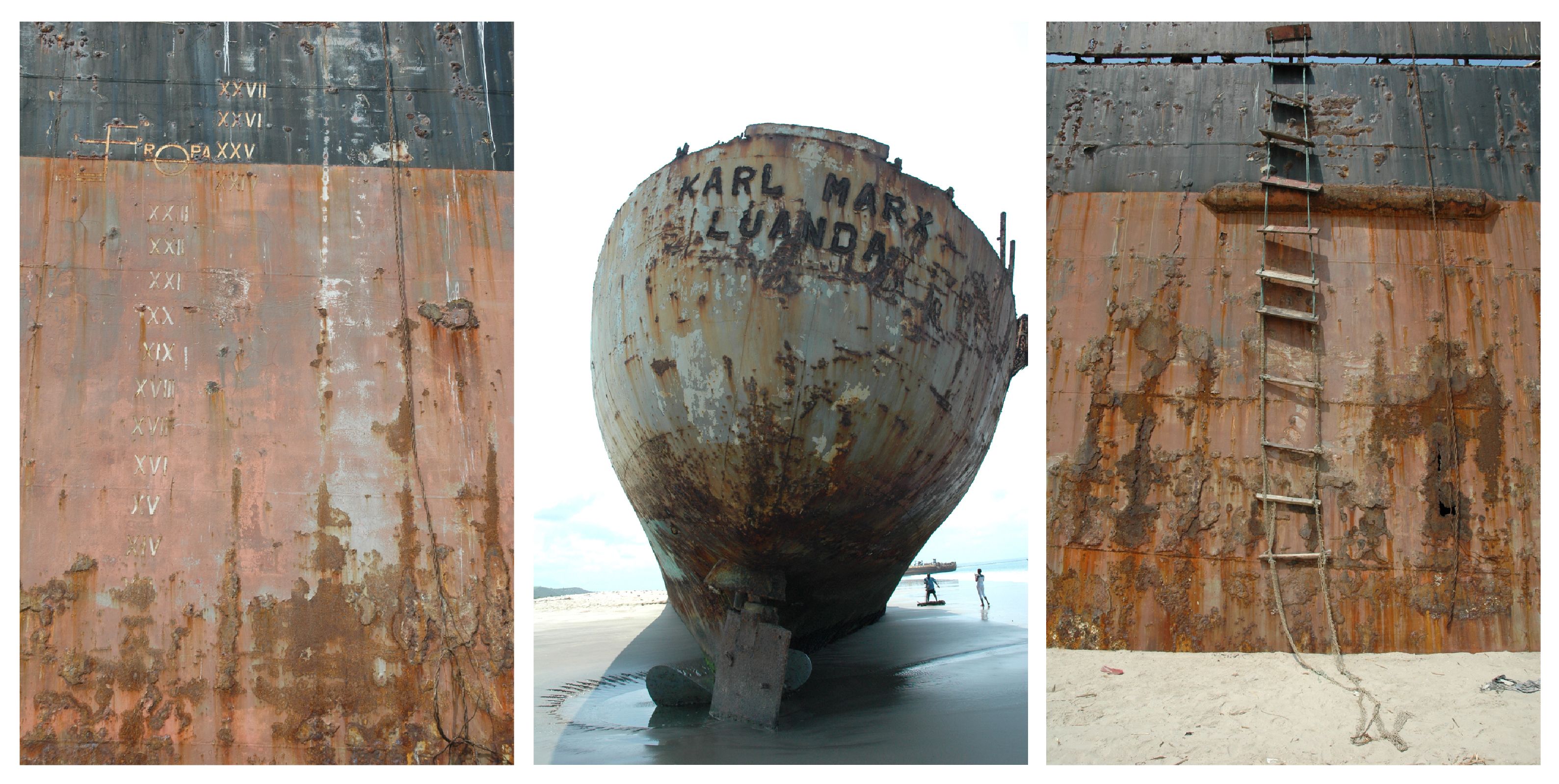 A recent encounter with the concept of Visible Thinking (VT) during a training organized by the Amsterdam based Thinking Museum inspired this brief piece about its applicability in an archival setting. Blinken OSA is a repository of unique collections primarily related to the history of the Cold War and international human rights violations, a research center as well as a public space with exhibits, conferences, screenings, film festivals, a special archival teaching program, and education outreach programs for K-12 schools. So how can a complex institution such as Blinken OSA make use of VT to bring history closer to younger generations and encourage critical thinking? In the following, I will detail a few VT routines tailored to familiarize participants with particular archival collections and historical events, and rethink them in a contemporary context. 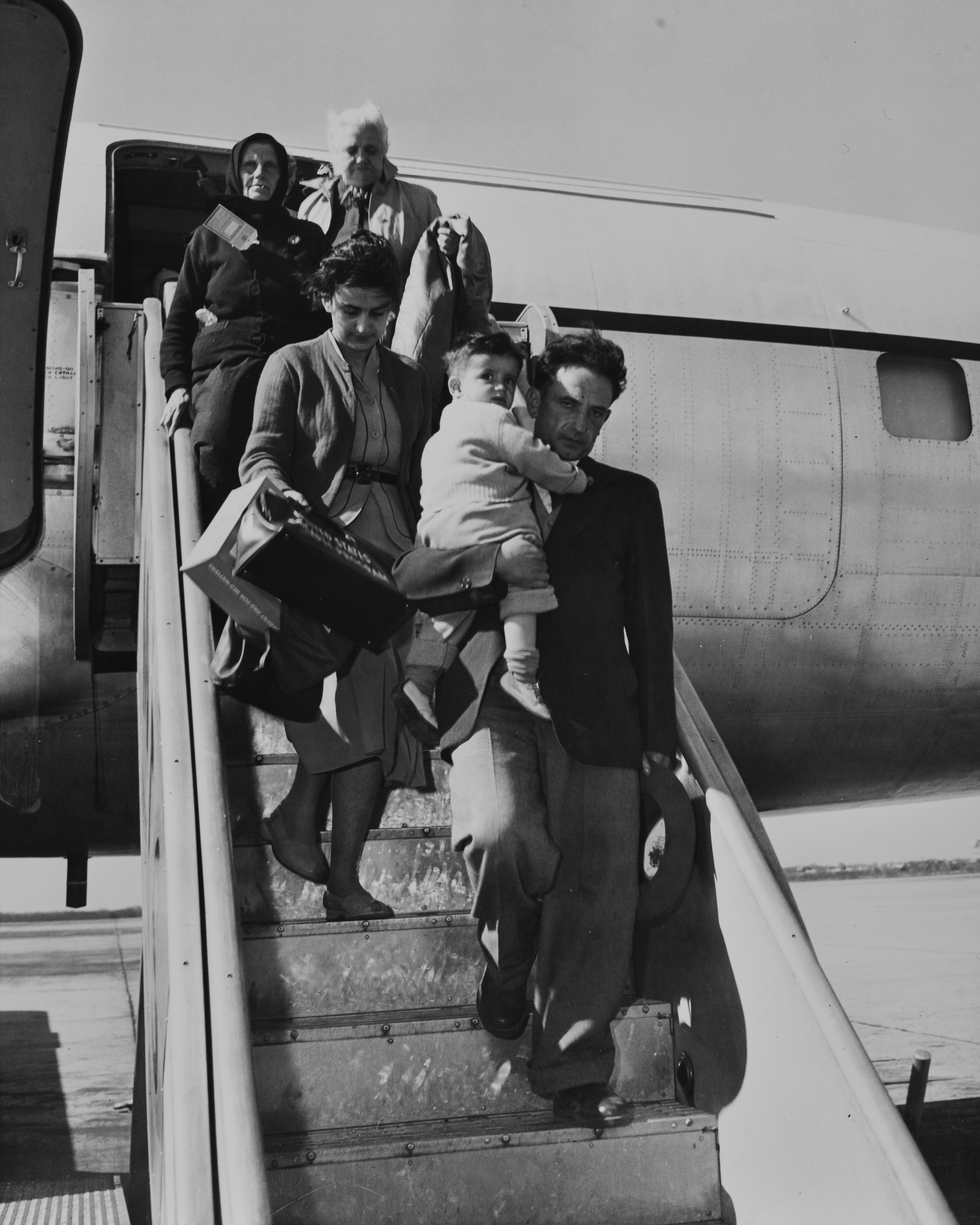 This activity aims to familiarize students with a unique digital collection curated by Blinken OSA about 1956 Hungarian Refugees in the United States. The activity focuses on 5 sets of images (3 individual and 2 pairs) the goal of which is to assemble the puzzles of a major historic event in (Hungarian) history and the ensuing refugee crisis. The exercise also provides a great opportunity to think about conflicts and refugees in a contemporary setting. 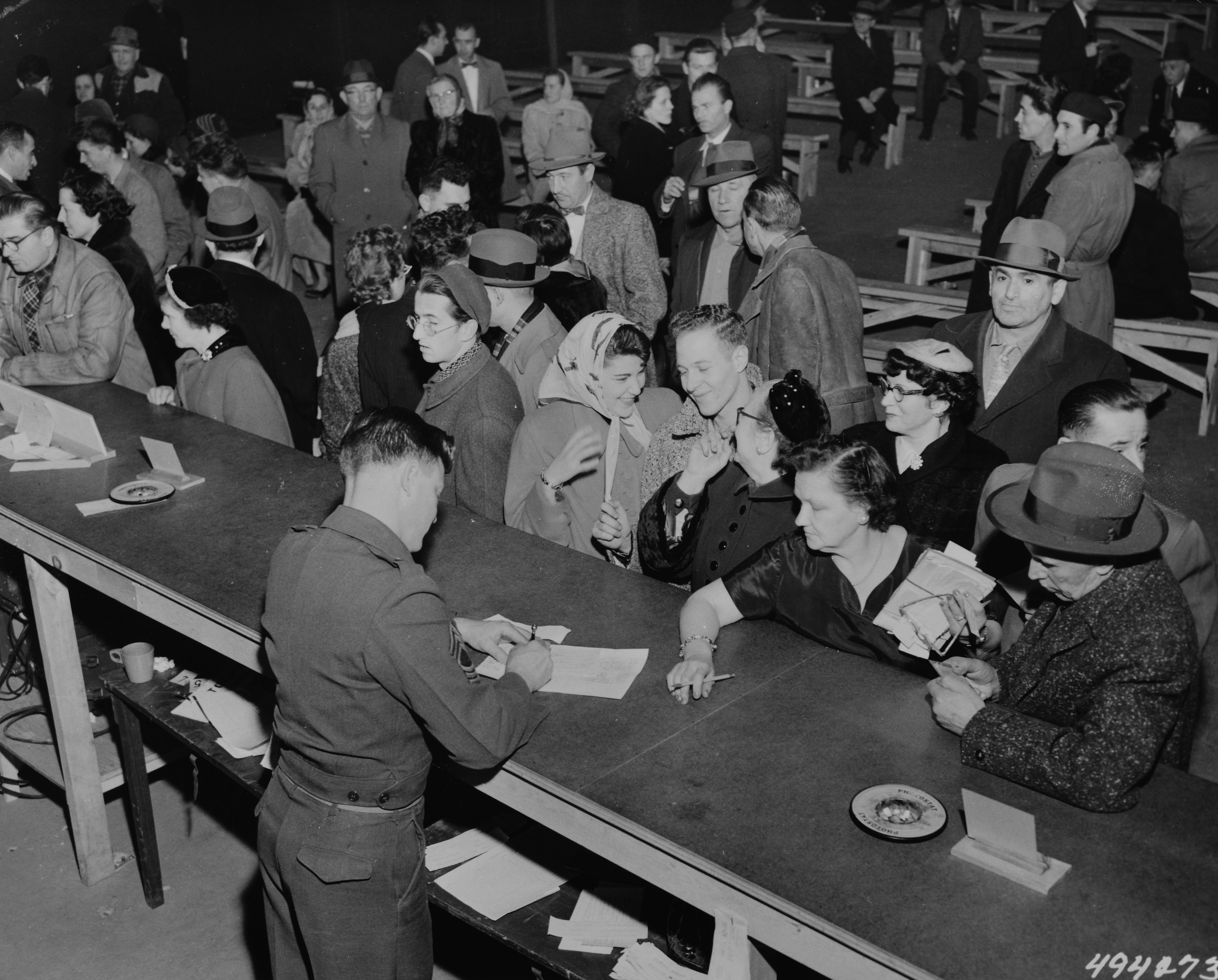 In the first routine, students look at the photos one by one and while doing the S/T/W routine they should put together a succession of events. The photos are in reversed order: starting with refugees arriving, a refugee reception center followed by images of revolt and a shattered Stalin statue and the final clues are the cover pages of international magazines. The S/T/W routine provides a good pace to observe and connect the images. 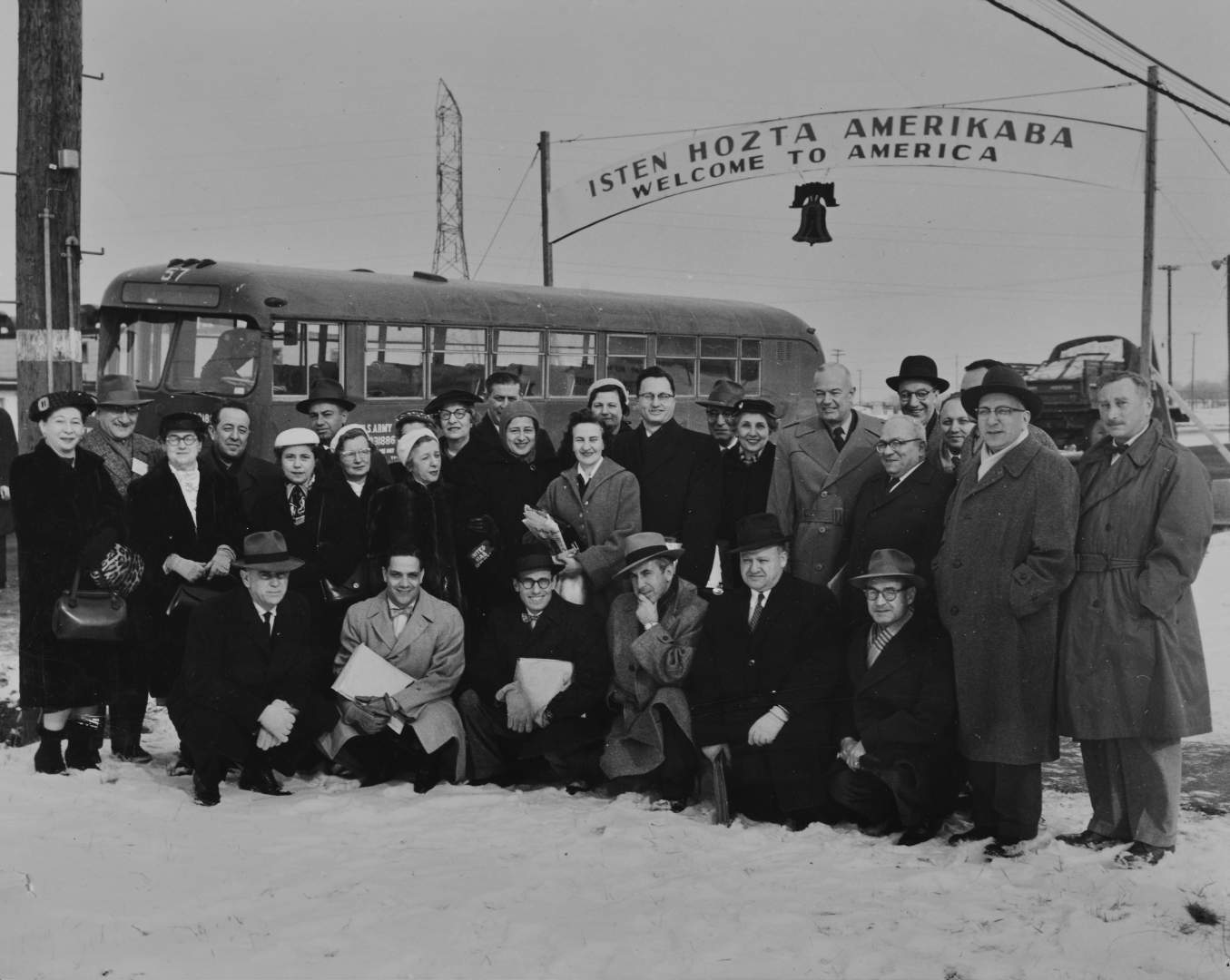 At the end of this routine additional information is provided about the historic context : After the brutal crush of the Hungarian Revolution of 1956 by Soviet tanks, close to 200.000 Hungarians fled to Austria. About thirty thousand of these refugees were received by the United States. President Dwight D. Eisenhower set up the President’s Committee for Hungarian Refugee Relief, an emergency relief agency to assist the logistics of reception and placement of Hungarian refugees. 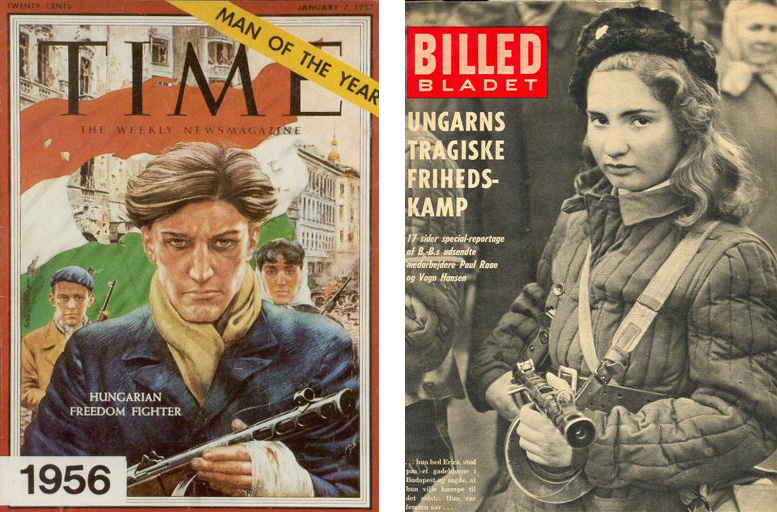 Overall, this activity familiarizes students with a special archival collection about Hungarian refugees, and also offers opportunities to reflect on issues such as political oppression and refugee crises in a contemporary context. 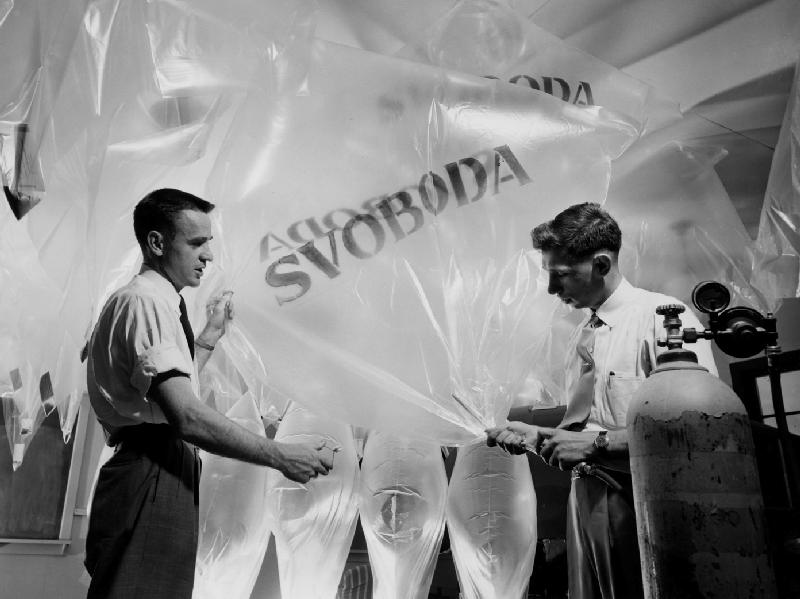 This activity aims to explore items from the largest collection at Blinken OSA: Records of Radio Free Europe /Radio Liberty Research Institute. The activity focuses on 4 images and 1 document which uncover a promotion campaign using special objects and techniques in special times. Besides introducing students to the basic concepts of Cold War propaganda, the exercise also provides a great opportunity to think about contemporary fora for ideological battles in the age of the internet.

Similarly to Activity #1, students look at the photos one by one and while doing the S/T/W routine they try to figure out what is happening exactly. The photos are in chronological order. The S/T/W routine provides a good pace to observe and connect the images and try to make sense of them (additional clues can be used if the group gets stuck figuring out the purpose of the balloons). 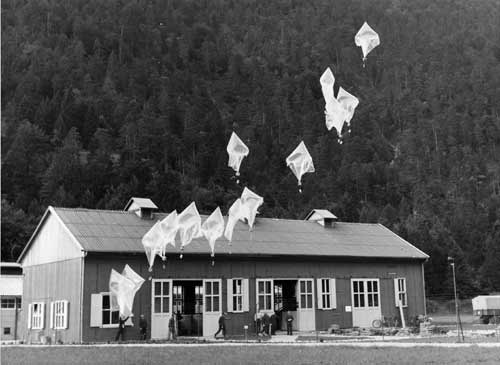 At the end of this routine additional information is provided about the historic context : In addition to its regular broadcasts, RFE spread broadcasts through a series of operations that distributed leaflets via meteorological balloons. From October 1951 to November 1956, the skies of Central Europe were filled with more than 350,000 balloons carrying over 300 million leaflets, posters, books, and other printed matter. Leaflets included messages of support and encouragement to citizens suffering under communist oppression, satirical criticisms of communist regimes and leaders, information about dissident movements and human rights campaigns, and messages expressing the solidarity of the American people with the residents of Eastern European nations. The project served as a publicity tool to solidify RFE's reputation as an unbiased broadcaster. ( Arch Puddington ) 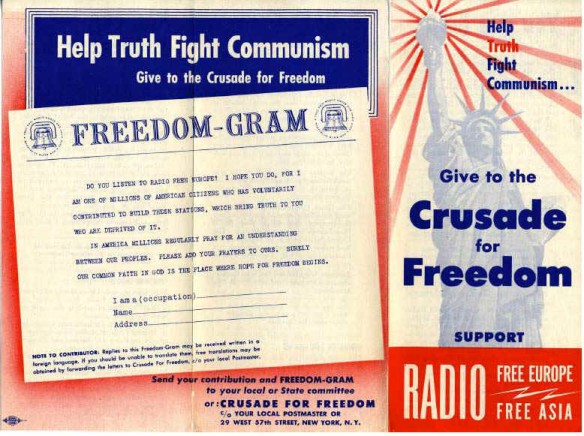 The second routine Past to Present aids students in comparing past historical events with present trends and practices.  Stimulating questions could be: How has the distribution of political propaganda changed since? Could the balloon method still work today? Do you know any alternative channels for information distribution if internet is shut down?

Activity # 3 – Red Africa
Target group: high school students / Group size: max. 20 / VT tools: photo
Thinking routines: Beginning/Middle/End (if a group has trouble figuring out the references on the image a brief See/Think/Wonder routine could put them in the right direction). Students should make up the 3 stories in 3 groups. After the activity is finished more info about image should be revealed.
As a second routine either 3Y’s or Past to Present could be used to reflect on relevance and present echoes.

This activity focuses on discussing the global legacy of communism based on an image from a presently running exhibit at Blinken OSA.
Exhibit info: 2017 is the centennial of the 1917 Russian Revolution which ushered in communism not only to Russia but many countries across the globe. The exhibit Red Africa - Things Fall Apart focuses on the legacy of the Soviet ideological efforts in various African countries.

Historic and artistic context:
Creator: Kiluanji Kia Henda / Title: Karl Marx, Luanda
Photographic triptych shows the ruined remains of a giant Soviet fishing ship donated by the USSR to Angola. Today the wreck lies abandoned on the Atlantic coast of Luanda, as a remnant of the trade relations between Angola and the Soviet Union during the decades of political collaboration between the two countries. The artwork is testament to the collision of Cold War strategies and ideological battles fought by competing superpowers in an unstable country rich in oil resources - and what these battles left behind.

As the above three examples show, archives can be great resources for VT routines – and vice versa. While the activities detailed here focus mainly on visual resources, exploring historic documents could be as exciting (e.g. pairing activities such as discovering a manual samizdat printer with having a closer look at an actual samizdat publication). VT routines are a creative way to explore historic collections with students and offer a creative platform to contextualize information. Overall, a great opportunity for a complex historic institution to bring history closer to younger generations and encourage interpretative and elaborative critical thinking.