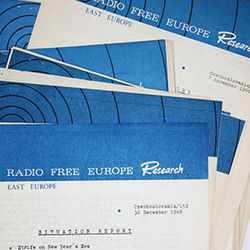 The collection is comprised of 9283 digital copies of Situation Reports (SRs) released from 1959 through 1989. Developed and published by Radio Free Europe (RFE), the Reports are based upon extensive monitoring of Soviet bloc newspapers (as well as other media) and independent journalistic research conducted by RFE staff members. SRs were disseminated in print both internally and externally. Presented as updates on current developments in a news format with limited editorial commentary, SRs address a wide range of topics, including political economy, international relations, and everyday life in Communist Central and Eastern Europe. In certain years, reports contained lists (with brief explanations) of “Agreements Signed,” the “Comings and Goings” of political and religious leaders as well as envoys from both eastern and western countries, and “Miscellaneous” news items.

The publication of SRs was initiated to supplement other RFE reportage (Background Reports and Press Surveys (1956)) and broaden the broadcasting activities of RFE national radio desks by providing the latest updates and developments in five Central and Eastern European countries: Bulgaria, Czechoslovakia, Hungary, Poland, and Romania. Although RFE did not broadcast to Albania, SRs for this country were published between 1961-1972. Following the merger of RFE and Radio Liberty (RL) in 1976 and the transfer of Baltic broadcasting from the RL division to the RFE division in 1984, the coverage area of the Reports was expanded to include the Baltic Area (Estonia, Latvia, and Lithuania) and Yugoslavia.

Every attempt was made to ensure that SRs met a high journalistic standard and were factually accurate so that they could serve as a source of reliable information about the Soviet bloc. (Editorial markings can occasionally be seen on reports.) Beginning in 1959 and continuing through 1961, active units published reports on a more or less daily basis. During this time, many reports were labeled “Negative” and may contain a sentence or two of information, a statement saying that there was nothing of note to report, or no text at all. These reports have been cataloged, but have not been digitized. The frequency with which reports were issued changed during their run: from semiweekly in 1962, to weekly around 1972, fortnightly in 1979, and approximately monthly in the early 1980s. SRs expanded in length and substantive depth over this time.

Use Conditions:
Ownership of and copyrights to the materials belong to RFE/RL, Inc., 1201 Connecticut Ave., N.W., Washington, DC 20036, USA. Permission to use the materials for purposes other than research and education shall be requested from RFE/RL, zvanersm@rferl.org.
Permanent URI: