Civil Contribution to the Transition in Eastern Europe 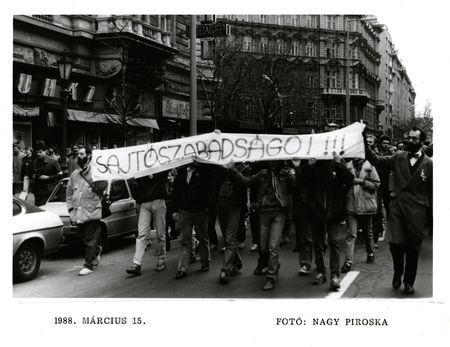 Civil contribution to the transition in Eastern Europe

-        Black Box Foundation: about the transition in Hungary;

On the morning of March 15, 1848, revolutionaries in Budapest visited the printing presses of Landerer and Heckenast and printed Sándor Petőfi's poem Nemzeti Dal (National Song) together with the 12 demands formulated by the leaders of the revolution. The first demand of this list was: We demand the freedom of the press, the abolition of censorship. The question of freedom of the press is one that today is still being contested both in authoritarian regimes and in liberal democracies where civil liberties seem to be increasingly under threat. The notions of freedom of the press and freedom of speech also impacts upon, and are interrelated with other areas such as censorship and self-censorship, the internet, copyright, intellectual property, the privatization of knowledge, protest and public order, public space, and human rights issues in general.  Therefore, freedom of the press is always among the demands of movements that fight for open, democratic societies. In the framework of the exhibition, Blinken OSA presents a selection of its various collections of Hungarian samizdat publications.

These “unofficial” publications, including periodicals, books, and ephemera, as well as audiovisual documents signalled the first fissures in the communist system, cracks in which young intellectuals carved out space for a semi-autonomous cultural and political discourse.

While freedom of the press has always been at the forefront of the public debate on a number of progressive issues, it is also increasingly used as an empty political slogan that is subjected to a very simplified, biased and populist debate. Current discourses about “fake news” and their relation to social media seem to challenge the importance of more traditional mediums (newspapers, radio and television). Therefore, the current presentation of our samizdat collection was selected by high-school students, who, as digital natives, revisit this period of old-fashioned clandestine media, discovering the different techniques, tactics, topics and teams around them, in the framework of the international project “Building Europe Together.”