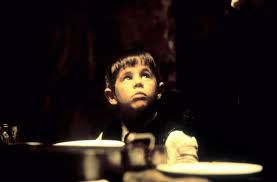 Veteran director Jose Luis Cuerda delivered this sensitive portrait of a child coming of age during a tense political situation just before the Spanish Civil War. On his first day of school, frail eight-year-old Moncho (Manuel Lozano) is so terrified by the imposing figure of his teacher Don Gregorio (Fernando Fernan Gomez) that he flees into the nearby woods. In spite of his authoritarian appearance, the schoolmaster proves to be a kind, free-thinking Republican who teaches Moncho the virtues of being good. The boy is soon spending much of his time with the elderly Gregorio in the Galician countryside, admiring such wonders of nature as the tongue of a butterfly. However, when the Fascists roll into town, the boy's life changes forever. La Lengua de las Mariposas was screened at the 1999 San Sebastian Film Festival.

El perro negro takes a clichés braking view of the Spanish Civil War trough a mesmerizing found footage collage. The saga begins in 1929 with the talented amateur filmmaker, Joan Salvans, son of a wealthy Catalan industrialist, of Terrassa. The Salvans were the object of admiration as one of the most successful wool manufacturer of Catalonia, but also of hatred by the emerging anarchists and socialist trade unionists. On 24 July 1936, six days after the Civil War broke out; a militant anarchist group led by 'Pedro el Cruel' kills Joan Salvans, filmmaker, and his father Franceso Salvans. A cyclist, not far from their house, finds their bodies 'La Barata'. Just about the same time when Joan's life unfortunately ends, a new saga of the other young clandestine filmmaker, Ernesto Noriega picks up the story line to guide us through his adventures. Throughout the film we travel through Spain's chaotic decade with the images and stories of several amateur filmmakers and their memories focusing on all sides of the front like republicans, anarchists, Communist, and the foreigner Brits, Germans, Italians, Americans, who fought on both side.

music performance by the Choir Soharóza

Paulino and Carmela are husband and wife, troubadours touring the countryside during the Spanish Civil War. They are Republicans, and with their mute assistant, Gustavete, they journey into rebel territory by mistake. They are arrested, fear a firing squad, and receive a reprieve from an Italian Fascist commander who loves the theatre. He arranges a performance for his troops, bargaining with Paulino to stage a burlesque of the republic in exchange for the actors' freedom. Will the fiery and patriotic Carmela consent?

“The politics of the gesture. Visual representations of the civilian victims during the Spanish Civil War.”

The presentation explores two photographs of civilian victims made during the Spanish Civil War. I focus on David Seymour’s (‘Chim’) photograph “Land reform meeting at Badajoz” and an anonymous photograph of the anarchist leader Buenaventura Durruti’s funeral, both from 1936. These images underwent radical re-signification, becoming icons that conveyed the suffering of women and children under the bombs. The transformation obscured the original politics of gesture, at the same time revealing powerful mechanisms of visual meaning-making. These case studies allow us to reflect on the evolving vocabulary for representing war violence, the role of visual imagery, and especially photography, in fostering political engagement in wartime and, more broadly, on the role of visuality in social-historical transformations.


The films are screened in original languages with English subtitles.