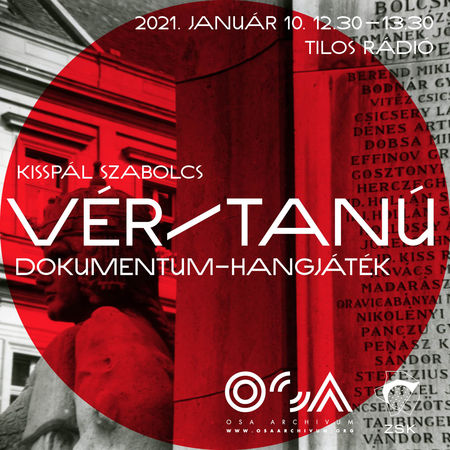 The play can be listened on our podcast page.

The events that took place hundred years ago are still leading to sharp, heated debates: which events do we consider national tragedies from the turn of the 1910s and 1920s? Whom do we consider victims to be emphasized as mementos for the collective memory? Whose blood was spilling from, so to say, the wounds of the nation? The documentary radio play by Szabolcs KissPál explores this issue through, on the one hand, the microhistories of the everyman of the era—the Jewish victims of the Red and White Terror—, and, on the other, through the great national narrative—the history of the Monument of National Martyrs, inaugurated in 1934, toppled in 1945, and reconstructed in 2019.

Comprising archival documents from the period (wittness testimonies and investigative documents, committee and council reports) and radio and TV recordings, the dramatized stream of texts interwoven with music inserts presents the public ideological-political battles and the silenced, forgotten private life events at the same time. This historical montage shows the historical changes in the relations between the individual and the community, the minority and majority: how did the Jewish community relate to the general, ever-changing power? What kind of atrocities did the Jewish community suffer during the Red and the White Terror? How is it possible (if at all possible) to voice the challenges of a mother and child? Are we able to reach a consensus independent of historical eras, ideological convictions, and political agendas, when it comes to the “martyrs of the nation”?

In March, 1934, in Martyrs’ Square, the “monument to the national martyrs of 1918–1919” was inaugurated “ceremoniously” in the presence of Regent Horthy and numerous nobilities. According to newspaper reports, the ceremony was introduced by Catholic, Lutheran, Calvinistic, Unitarian, and Jewish services. In September, 1945, by the decision of the Budapest Metropolitan Board of Public Works and by the common consensus of all parties in the Parliament, the ”eyesore counterrevolutionary memorial” was toppled being labeled as a profanity against the martyrs of the new democratic Hungary. In 2019, on the 101st anniversary of the Aster Revolution, the re-erection of the ill-fated memorial was lacking even such a pretense of a consensus. The documentary radio play by Szabolcs KissPál puts this still ongoing story into a discursive frame: not judging but by digging into the heart of the events, he shows that the “national martyrs” were real-life people, instead of mere names to be put on memorials in the midst of ideological and political battles.

Produced by the Vera and Donald Blinken Open Society Archives as part of the exhibition From Harvest to Harvest – Hungarian Calvary 1918–1919, supported by the  Zsidó Kultúra 2028, in January, 2021.