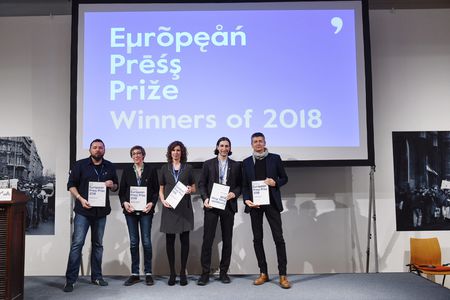 The 2018 European Press Prize winners were announced on March 14 in Budapest at Blinken OSA, recognising outstanding contributions to journalism from across the continent. Winners include Michael Obert in Süddeutsche Zeitung Magazin, Stéphane Foucart and Stéphane Horel in Le Monde, Dragan Bursać for Al Jazeera and Ida Nyegård Espersen in Jyllands-Posten.

The press release about the event stressed, that it marked a culturally significant day - the commemoration of the 1848 Hungarian Revolution - at a historically significant time. During the revolution, one of the key demands was abolishing censorship. Today, Hungary is gearing up for national elections under Viktor Orbán, whose ruling party seeks to undermine press independence.

“By hosting the European Press Prize Award Ceremony in Budapest, we want to emphasise the importance of an open, free and well-functioning press to democracy", said Yoeri Albrecht, board member of the European Press Prize, Director of Amsterdam’s cultural debate centre De Balie, and member of the Open Society Foundations’ European Advisory Board. “The setting also serves as a warning on what can happen when press freedom is not protected.”

The ceremony was hosted by Antónia Mészáros, former TV presenter and correspondent for the BBC, now executive director of UNICEF. The keynote speaker was Miklós Haraszti, former OSCE Representative on Freedom of the Media and professor on global press freedom.

Michael Obert won the Distinguished Reporting Award for his article The Human Catcher, published by Süddeutsche Zeitung Magazin. Obert’s incredible reportage starts under machine gun fire as he follows warlord Al Bija around the Mediterranean, fishing refugees out of the water in support of EU policy.
For a project that challenges the boundaries of journalism - Bureau Local won the Innovation Award. Judges found that Bureau Local had a truly innovative approach to convincing us that local journalists play a defining role in holding the powerful to account. An honourable mention goes to the impressive work of the runner-up: Jailed for A Like by Coda Story.

Stéphane Foucart and Stéphane Horel won the Investigative Reporting Award for the remarkable research that went into The Monsanto Papers, published by Le Monde. Horel and Foucart uncover how Agrochemical company Monsanto interfered with science, policy and people to undermine the credibility of the International Agency for Research on Cancer. A special mention goes to runners-up Till Krause and Hannes Grassegger for their piece on working conditions at Facebook and the secret rules of their "post deleters" in Behind the Walls of Silence.

Dragan Bursać won the Opinion Award for his heart-breaking rendition of the brutal fate of Petar, a seven-year-old Serbian boy killed during the Bosnian war. Bosnian war crimes rarely make it into the Bosnian media, especially those calling for Bosnian war criminals to be punished. That makes this piece, published by Al Jazeera Balkans, a remarkable and incredibly brave contribution.

For a piece that defies categories, the judges – under the guidance of chairman Sir Harold Evans - single out one exceptional project to award a Special Prize. In honour of the European Press Prize’s founding father, the late Peter Preston, judges chose This Crime Requires Only Poverty, the Internet and a Buyer, written by Ida Nyegård Espersen for Jyllands-Posten. Her relentless efforts to unravel a complex crime exemplify the qualities Preston strove to recognise.