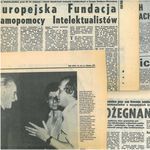 The Fondation pour une entraide intellectuelle européenne (Foundation for the Support of European Intellectuals, FEIE) was set up in 1966 in Geneva to provide moral and financial support to non-conformist intellectuals in East European Communist countries, and also in the former dictatorships of Spain and Portugal. The idea to establish the FEIE came from members of the Congress for Cultural Freedom, an advocacy group formed in the 1950s to fight the influence of Communism.

The Foundation awarded grants and scholarships to intellectuals who, after studying or researching in Germany, France, and the United Kingdom, intended to continue their activities in their native countries. FEIE also aided intellectuals by organizing conferences and publishing book reviews for them , and by sending books and publications that otherwise unavailable. Over the 25 years of its activities, FEIE supported over 3,000 intellectuals and sent them around 15,000 books. The Foundation was awarded the Bruno Kreisky Prize in 1991 for its efforts to protect human rights, the same year when it was closed down and its records deposited with the European Institute by Anette Laborey and Timothy Garton Ash.

FEIE materials include grant and project files, and correspondence and memos, as well as administrative files relating to aid and financial support for scientists and intellectuals who worked under oppressive regimes in Eastern Europe, Spain, and Portugal.