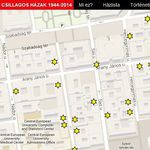 70 years ago, in the last months of Miklós Horthy’s regency, Hungarian political leaders took a fatal decision: having finished deporting the Jews from the countryside, it was now the turn of those living in Budapest to be forcibly expelled from their homes. The Hungarian leaders’ original plan had been to deport the Budapest Jews first but, on German advice, the annihilation of Hungarian citizens defined as “Jewish” was begun in the countryside. However, the final goal, whether explicitly or not, remained the same: Budapest Jews would also be deported to extermination camps. Hungarians subjected to a series of “Jewish laws,” who had already had to wear a six-pointed yellow star on their clothing from April 5, 1944, now had to move by June 21 to designated places of residence in “yellow-star houses.” According to the decree issued on June 16, the residents of these buildings, be they long-term residents or those recently forced to move in, were required to place a clearly visible, “canary yellow” Star of David above the entrance to the building.

OSA Archivum remembers this tragic and shameful chapter of Budapest's past by exploring the history of the “yellow-star” houses. With the help of volunteers, we are seeking contact with today’s residents of the former yellow-star houses, to jointly face the past that we know: what happened is not a question of analysis or political affiliation. Those alive today do not bear responsibility for what happened 70 years ago. We cannot feel guilty for what we did not commit. Consciousness as responsible citizens demands that we face our shared legacy, while human honesty demands that we do not deny, revise, falsify or rewrite what happened.

For the Budapest of the time, an astonishingly large number of buildings — almost 2,000 houses — bore the yellow star, but barely a trace of this remains in public memory. For half a year, every passer-by in the city could see precisely where the persecuted Jews lived, and who they were. By reason of international events, the majority of Budapest Jews were spared of the tragic fate of their rural compatriots, and those in Újpest, Pesterzsébet, and Kispest, which, back then, did not belong to Budapest. With the exception of the tens of thousands of victims of the death marches, those shot to death on the banks of the Danube, and those who died during the siege of Budapest, Jews in Budapest who went into hiding in the city, or who ended up in the ghetto established in December 1944, had a better chance of surviving the Holocaust than those in other parts of the country.

We will publish as much relevant material as possible on our website, www.csillagoshazak.hu, and invite everyone to share their documents and stories about the families and buildings involved.

On June 21, 2014, we will organize a memorial event in front of the roughly 1,600 buildings, former “yellow-star houses,” that still exist. We invite you to join us as a participant or volunteer organizer to face this neglected chapter of our shared past together, and with dignity and honor.