White Supremacist Collaboration between Hollywood and the White House 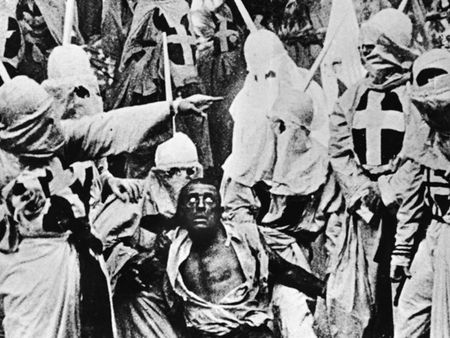 White Supremacist Collaboration between Hollywood and the White House

The slippery idea of documentary truth and cinéma vérité belongs to a bygone epistemological paradigm that considered photographic evidence unquestionably factual and objective. D. W. Griffith, for example, presents so-called ‘historical facsimiles’ in ‘The Birth of a Nation’ (1915) based on photographs of actual events or reenactments of historical events (like Lincoln’s assassination). The film, however, is the single most effective propaganda effort in American history. It turned the outlawed domestic terrorists of the Ku Klux Klan into heroes in the public opinion by creating a collective false memory of the historic trauma of African-American men perpetrating rape and other forms of violence. Faking history goes as far in the film as showing a black on black lynching scene and Lincoln as the de facto champion of the Southern cause. Beside the authority of photographs, the film uses the academic and presidential authority of Woodrow Wilson’s printed words in form of direct quotations from his book The History of the American People; these quotations glorify the KKK as a sovereign power defending the Southern nation from black violence. In return the film provides convincing justification for Wilson’s attack on the civil rights of the new black citizens. The cooperation between Hollywood (as a global business of telecommunication) and the White House started with the first feature-length film. It was necessitated simply because the first American multi-reel film carried a multiplied risk of profit loss due to its shear length and therefore needed the backing of the White House and the Federal Supreme Court against the local licensing authorities of New York City and Boston (both determined against the release of the film). And that cooperation served to promote the spirit of white supremacy.

Erika Kiss is the Founding Director of the UCHV Film Forum. She regularly teaches the theory and history of art cinema in the Department of Comparative Literature and the Program in European Cultural Studies. She has studied history, literature and linguistics in Hungary (B.A., M.A.) and comparative literature at Harvard University (M.A., Ph.D.). She was a member of the Department of Medieval and Modern Languages at the University of Oxford and a fellow of Balliol College, Oxford. She is a co-founder of Germany's first private English-language liberal arts college, the European College of Liberal Arts (ECLA) in Berlin, raised funds for it and served as its first CEO. As ECLA's first dean of academic affairs, she developed a year-long interdisciplinary curriculum in intellectual history and the liberal arts and supervised its implementation. Kiss’s agenda as a researcher (but also as a teacher) is to uncover art – especially the relatively new art of cinema – as a site of critical thinking in order to reform the Trivium of liberal education for the age of electronic communication.  Such liberal education in the intersection of the civic and the aesthetic art of rhetorical deliberation is constitutive of deliberative democracies. Kiss’s most recent articles are ‘Beyond Native and Alien: Nietzsche, Literally’ in Philosophy & Rhetoric - volume 51, issue 1 (2018) and ‘Between Mimesis and Technē: Cinematic Image as a Site for Critical Thinking’ in The Journal of Aesthetic Education -volume 51, issue 3(2017).