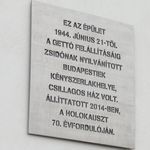 On Thursday April 17, OSA presented the Yellow-Star Houses project at an informal event for the international press. Present were invited members of the Hungarian International Press Association, freelance journalists, and representatives of foreign diplomatic missions and cultural institutes in Budapest.

OSA’s director István Rév presented the background, context and aims of the project as a public history undertaking, the website, and our planned events for June 21, the 70th anniversary of the forced relocation of Budapest Jews into the yellow-star houses, and also this year’s Night of the Museums. He also reported on our activities over the past few weeks, when OSA staff and volunteers placed a sticker on the front door of every remaining former yellow-star house, to raise awareness and encourage residents to get involved. Also present was Katarzyna Sitko, director of the Polish Institute in Budapest, one of our partner institutions which is also based in a former yellow-star house, who explained why the Polish Institute will be taking part, and expanded on their forthcoming related exhibition, film screenings and memory walk.

We also screened a short film of Jews being force-marched through the streets of Budapest for two days after the Arrow Cross takeover of power on October 15, 1944, which is also available on the Yellow-Star Houses website, under “Videos.”

After the presentations, Yellow-Star House project members responded to questions and discussed the project in more detail in informal conversations with our guests.

The photo illustration is of the first commemorative plaque erected in the city last week on Holocaust Memorial Day, at the former yellow-star house on Kossuth Square 4, which today is the Ministry of Public Administration and Justice. In English, the text of the plaque is as follows: “From June 21, 1944 until the establishment of the ghetto, this building was where Budapest citizens defined as Jews were forced to live: a yellow-star house. Erected in 2014, on the 70th anniversary of the Holocaust.”