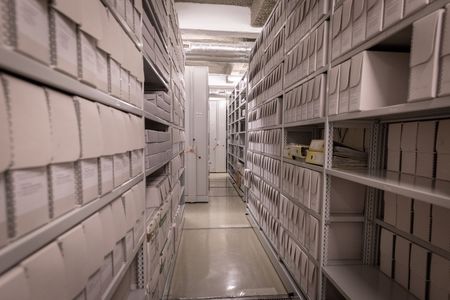 The CEU Budapest – OSUN Doctoral and Postdoctoral Fellowships provide an opportunity for individual research grant support for doctoral students and junior scholars to spend between 4 and 12 months in Budapest at the CEU Democracy Institute (DI) or the Vera and Donald Blinken Open Society Archives.

The Blinken OSA welcomed its first two PostDoc fellows and first Ph.D. fellow in April 2022.
The first three awardees of the new fellowship at Blinken OSA and their research topics are:

Adrian-George Matus holds a Ph.D. in Comparative History from the European University Institute Florence and a MA in Contemporary History from Université Sorbonne Paris IV. His research interests include cultural history in Socialist states, alternative forms of dissent, educational outreach through archives, oral history, and non-formal education. Within the postdoctoral framework, his focus is on the Kevin Devlin collection. Compiled by Kevin Devlin, an analyst at the Radio Free Europe/Radio Liberty Research Institute, this archival series covers the history of communist parties in countries outside the Socialist Bloc. Matus’ aim is to understand how RFE perceived the activity of Western communist parties on topics like dissidents’ activity and Eurocommunism.

Marco Gabbas holds a Ph.D. in History from the University of Milan, an MA in Comparative Contemporary History from CEU. He is a researcher broadly dealing with the history of the international Communist movement, pursuing interdisciplinary approaches. He has published on Soviet collectivization, Latin American Communism and its impact on the Italian Left, on Maoism, and political violence in Italy.  During his CEU Budapest – OSUN fellowship, he will study the Soviet role in anti-colonial struggles, trying to link his project to three OSUN Global South partners: Wits University in South Africa, Ashesi University in Ghana, and BRAC University in Bangladesh.

Marko Milošev is a Ph.D. candidate at the Department of History, Central European University Private University in Vienna. His research project includes examining the causes of radicalization and the use of political violence in right-wing groups in Yugoslavia. He was also involved in various projects connected to the research of contemporary and historical radical right and fascist groups in Central Europe and the Balkans. During his stay at Blinken OSA, his plan is to examine the complex networks of rightwing and nationalist actors in Yugoslavia and abroad in the postwar period, challenging existing notions of the black-and-white roles between the ruling elites and the opposition forces.