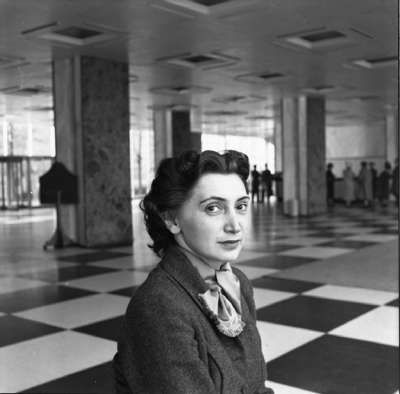 In 1998, a special visitor arrived at the Archives to discuss the donation of her document collection. Her original plan was to donate it to the recently established Open Society Archives, but after much discussion, it was decided that due to the national importance of the documents, the Archives would help the acquisition financially, but the collection should become part of the National Széchényi Library’s Manuscript Department.

Claire de Héderváry (Klára Héderváry), a Hungarian emigree, had an exceptional career path in the 20th century: she was born in Hungary, educated in Brussels, Paris, and the United States (at the Harvard and Columbia universities). After finishing her studies, she was recruited by the United Nations as an Economic Affairs Officer.

When in January 1957 the UN set up the Special Committee on the Problem of Hungary, Claire de Héderváry offered her services, and worked there for four years while the question was on the agenda. First, she was working for the secretariat of the Committee, but later she became the advisor to the Special Representative of the Committee. When the Committee ceased to function, the UN’s Special Representative and Claire de Héderváry managed to keep the Hungarian question on the UN’s agenda until 1962. After that, she continued to work for the UN until her retirement in 1981 as one of the Directors of the Political Departments.

By the strict UN’s retention schedule, the Special Committee documentation, drafts, audio recordings, background material, and even duplicate copies of documents should have been destroyed after three years. Claire de Héderváry played a crucial part in saving a considerable amount of these documents by taking them home in 22 whiskey crates, with the approval of her boss, and later depositing them at the Hoover Institution, Stanford University.

The collection found its way to Hungary in 1998, but the story took another unexpected turn in 2009. On the demand of Claire de Héderváry, Blinken OSA stepped in to help with the digitization and preservation process of the 30,000-page collection deposited at the National Széchenyi Library. Now the documents are available online at the Archive's Digital Repository.

The life of this exceptional woman was showcased in a short documentary portrait produced by Gabriella Ivacs, our former colleague, with the help of Tamás Szűcs.

The film can be watched here.