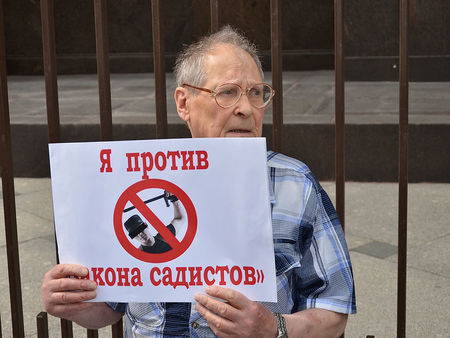 Sergey Kovalev began his career as a biophysicist and was a top leading scientist before he became one of the most famous human rights defenders in the former USSR. In the late 1960s, he was fired from his position for setting up the Action Group for the Defense of Human Rights in the USSR in 1969. He regularly published in the samizdat publication titled Chronicle of Current Events, writing about labor camps or the arrests and psychiatric confinements of the opponents of the regime.

In 1974, he was accused of spreading “anti-Soviet propaganda,” was arrested and sentenced to seven years in the Gulag, followed by three years of internal exile in the far-east and Kolyma. The reforms by Mikhael Gorbachev allowed him to return to Moscow in 1987. During perestroika, he resumed his activism and participated in the founding of several key humanitarian organizations and initiatives, among them Memorial, a human rights society dedicated to the memory and rehabilitation of victims of political repression in the USSR.

He was among the few human rights activist who took up an active political role after the collapse of the Soviet Union. He was an outspoken opponent of the Chechen conflict, and fiercely criticized the political system built by Putin, which he called a “controlled democracy.”

Blinken OSA has a very rich collection on Kovalev’s dissident and human rights activities, as well as on his persecution in the 1970s, under the series Published Samizdat and Biographical Files.

Kovalev's human rights activism in Russia in the 1990s, including his duties as the Chairman of the Commission on Human Rights under the President of the Russian Federation, are highlighted in numerous radio and TV programs available online in the digital collections RFE/RL Russian Broadcast Recordings and Soviet and Russian Television Monitoring.