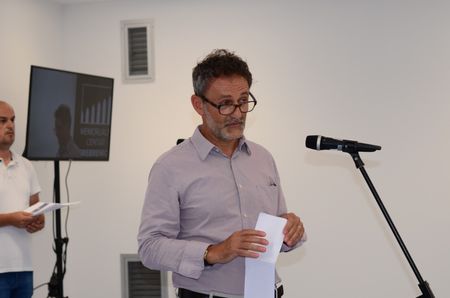 A Weapon to Fight Denialism: the Archives Collecting Evidence on the Srebrenica Genocide

The Srebrenica Memorial Center Archive was opened today, in order to provide local access to evidentiary documents on the genocide. Blinken OSA, operating in Budapest, supported the creation of the new archives in Bosnia–Herzegovina with pro bono consultancy work and archival donations.

In July 1995, 26 years ago, the Bosnian Serb Army carried out the systematic execution of 8,372 Bosnian Muslim men and boys in the larger Srebrenica area. From 1998, parallel to the refuge return process, commemorations began to take place at the former UN base of the “safe area,” which, in 2000, became the official site of the 5th anniversary. The Srebrenica Memorial Center (SMC) was opened in 2003, comprising a museum as well as a cemetery. Now, with an ongoing fight against genocide denialism, SMC is complemented with an archives, to provide local and open access to archival documents, evidence, and literature concerning the genocide. The Srebrenica Memorial Center Archive will help strengthen the key mission of the Srebrenica Memorial Center: to create a factual and contextual documentary basis and protect the truth about the 1995 Srebrenica genocide. It will enhance cooperation with the victims’ families and involved communities and scholars involved in research related to genocide and transitional justice, as well as with journalists. It is of paramount importance that documents, photos, audiovisual records and material objects are collected and made accessible at the Srebrenica Memorial Center Archive, as the genocide took place in Srebrenica and surrounding areas.

In his opening speech, Emir Suljagić, director of the Srebrenica Memorial Center, stressed how this day was historical for different reasons. “At this moment we are, for the first time, able to have new capacity for archiving. In another way, I’m very glad that this project also is showing our capability to connect with a line of other organizations, with the aim to rebuild and build more.” The development of the Archive is a joint project of the Srebrenica Memorial Center, Blinken OSA, and PAX for Peace.

Csaba Szilágyi, Acting Chief Archivist and Head of Human Rights Program at Blinken OSA (Budapest, Hungary), strongly believes that “making relevant documentation on human rights abuses, war crimes, and genocide openly and freely available to everyone is paramount in fighting the culture of societal denial.” This year, Blinken OSA provided a free archival training to the memorial center. Besides covering a wide range of topics that serve as the base for professional archival operation, the program also paid attention to archiving documents on human rights violations and social justice. In his speech at the opening event of the Srebrenica Memorial Center Archive, Csaba Szilágyi said, “we want to create an archives where the restoration of human integrity remains in the forefront of archival practices and procedures.” He also announced today that Blinken OSA has donated to the new archives

David S. Rohde was the first Western journalist to report the mass graves in the UN “safe area.” In 1996, he was awarded the Pulitzer Prize for his series of articles covering the genocide. The background materials he compiled throughout this work is preserved, cataloged, and digitized at Blinken OSA, and with the opening of the SMC Archive, digitized copies are now available in Srebrenica as well. In a video message to the opening event, Rohde expressed how honored he is, that the SMC Archive is going to include his materials into its holdings. Addressing “the success of denialism in Bosnia, and denialism in the United States,” caused by an “explosion of online disinformation,” Rohde regarded the archive to be an antidote to that disinformation. “It will allow young people to study what happened in Srebrenica, and see the truth. Look at records, look at artifacts, and make their own decisions.”

Nataša Kandić, the founder of the Humanitarian Law Center, welcomed the opening of the archive because it fills a missing part in the SMC, providing context to the museum and the cemetery. “Now, the cemetery has a context, where we can say how a situation was created that there is a cemetery, who participated in this, what are the findings, and why it is important that we never forget Srebrenica.” She also urged everyone to keep developing this archive, because getting to know its holdings is “the biggest weapon to fight revisionism and denialism in the society.” The Humanitarian Law Center, an NGO documenting human rights violations across the former Yugoslavia, donated a part of its collection to the SMC Archive.