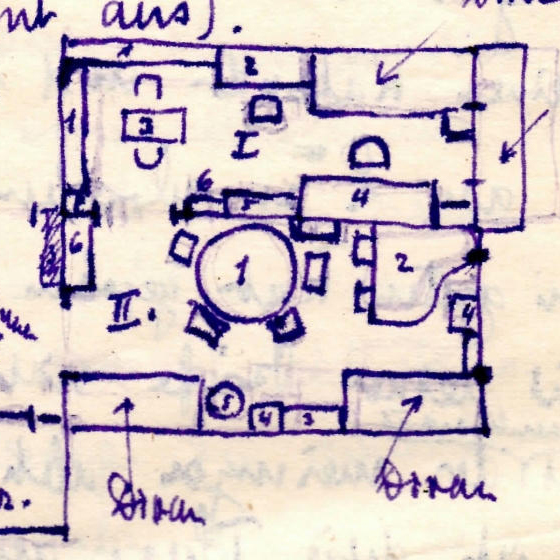 It is a cliché that famous people always have a faithful and industrious partner beside (or behind) them, serving their masters by abandoning personal ambitions and occasionally even themselves, so that the other can accomplish what destiny had in store for them. In later recollections, the celebrated individual may or may not acknowledge the sacrifice, or may leave the question open as to whether and to what extent their achievements were due to their own talent and labor, and in what measure they relied on the help of others.

György Lukács, the renowned philosopher and aesthetician, died fifty years ago today, on June 4, 1971. Writing something new about Lukács half a century later isn’t easy; his oeuvre has been studied by numerous researchers, and his estate was—until recently—preserved at his former apartment which was turned into an archive named after him (more on the dispersal of the Lukács Archive here). The 145 letters (some incomplete) donated recently to Blinken OSA may, however, provide small yet important details on his family and especially on his wife and intellectual partner, Gertrud Bortstieber. The correspondence—primarily consisting of letters sent by Gertrud Bortstieber from Moscow to her son, Lajos, between 1933 and 1938—is a previously unknown part of the Bortstieber estate. It has surfaced now with the heirs’ decision to withdraw the entire estate from the now closed Lukács Archive, and to donate it to Blinken OSA.

Therefore, on the 50th anniversary of his death, let us remember György Lukács. 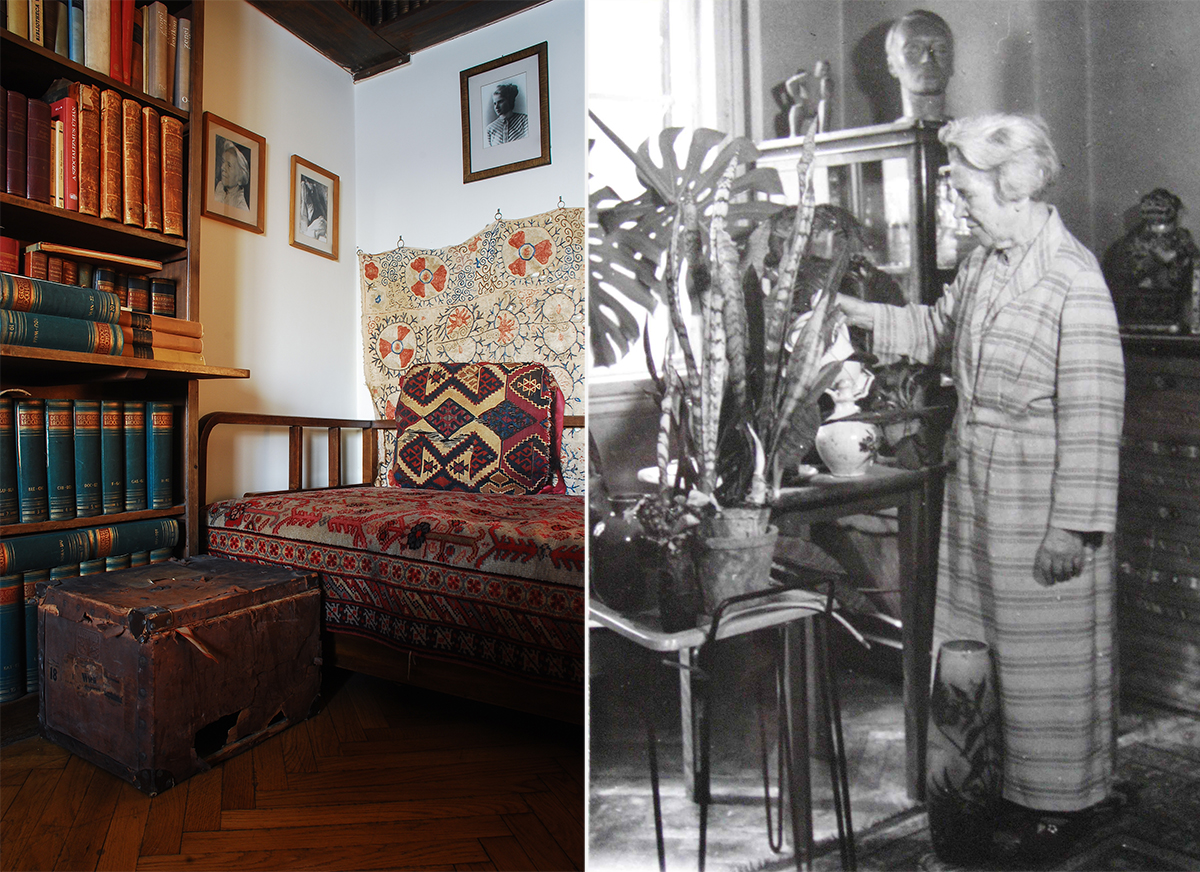 “Ever since I first met G. the need to be approved of by her has been the central question of my personal life.”

And let us also remember his wife, Gertrud Bortstieber (1882–1963). The two became close in 1918, following one of Lukács’s lectures, and not long after his first marriage had ended. In his autobiographical sketch (Gelebtes Denken), Lukács wrote about Bortstieber as follows:

“1917–18: growth of a new attachment: unfathomable, but I had the feeling that for the first time in my life, I was in love: complementarity, solid basis for life (a touchstone for my ideas)—not opposition. Immediate topics of conversation were secondary. The true content was always: whether what I thought and felt was real, i.e. whether it expressed my true individuality (subjectively: genuine; objectively: in conformity with the species). Her activity as a touchstone, which at first took the form of spontaneous gestures, emphases, gradually became a new way of life: a permanent double check on authenticity. I do not know whether the inner transformation of my thought (1917–19) would have been possible without this double check.”

“Now with every decision, Gertrud strongly involved: particularly in human, personal decisions. Her reaction often decisive. Not that I would not have turned to communism without her. That was something that was contained in my previous development, but nevertheless the complex questions surrounding the actual decision and the highly important personal implications of that choice would quite certainly have had a different outcome but for her. And with that much of what has been most essential to me in the whole course of my life.”

From the very beginning, Lukács acknowledged, even proclaimed, the role Bortstieber played in his life; he associated his professedly most meaningful decision with her, almost attributing it to her: “where fateful decisions had to be made (whether to join the Communists or remain in a ‘left/socialist’ position), G.’s reaction was decisive in the final analysis, even though she remained reluctant to speak her mind on the grounds that she had never considered these issues before.” What followed: a more than four-decade-long companionship marked by successes and failures, periods of wellbeing and poverty, exile and exclusion.

In August 1919, Lukács fled to Vienna because of the role he played in the Hungarian Soviet Republic. Not long after that, Bortstieber’s first husband (and father of her two sons) died, and she moved to Hütteldorf with her sons, Lajos and Ferenc, and with Anna, her and Lukács’s daughter. On the initial years in Vienna, Lukács writes:

“Spring 1920, Gertrud in Vienna. Lived with her sister with the children in Hütteldorf; I stayed in Vienna for the time being. Only together on our free days. In this way her form of life (family, three children) becomes the determining factor for me as well. My involvement in raising children (with her): daily need to get to grips with specific human problems.”

According to Lukács’s recollection, his wife—they married in 1923—first encountered the works of Marx, Luxemburg, Bauer, and Bukharin in Vienna; soon she became an enthusiastic researcher of Socialist economic theory. They lived together in Vienna until the end of the decade, and, following a couple of shorter and longer intervals in Budapest, Moscow, and Berlin, they moved to Moscow in March 1933, right after Hitler rose to power. Ferenc traveled with them; their daughter, Anna, joined them a year later. Bortstieber’s older son, Lajos, was at that time a university student in Vienna and then in Berlin; a few years later he moved to Manchester where he made a name for himself with his research into cosmic radiation.

Let us now turn to the letters, which the family recently donated to Blinken OSA. The majority were written between 1933 and 1938 by Gertrud Bortstieber to her older son, Lajos. She wrote to him regularly (every nineteen days on average, according to her calculation from 1935, while Lajos replied every twenty days). She wrote her letters exclusively in German (Liebes Lajcsólein). Through them we get a glimpse into lesser-known aspects of the family’s life in Moscow, which lasted over a decade. 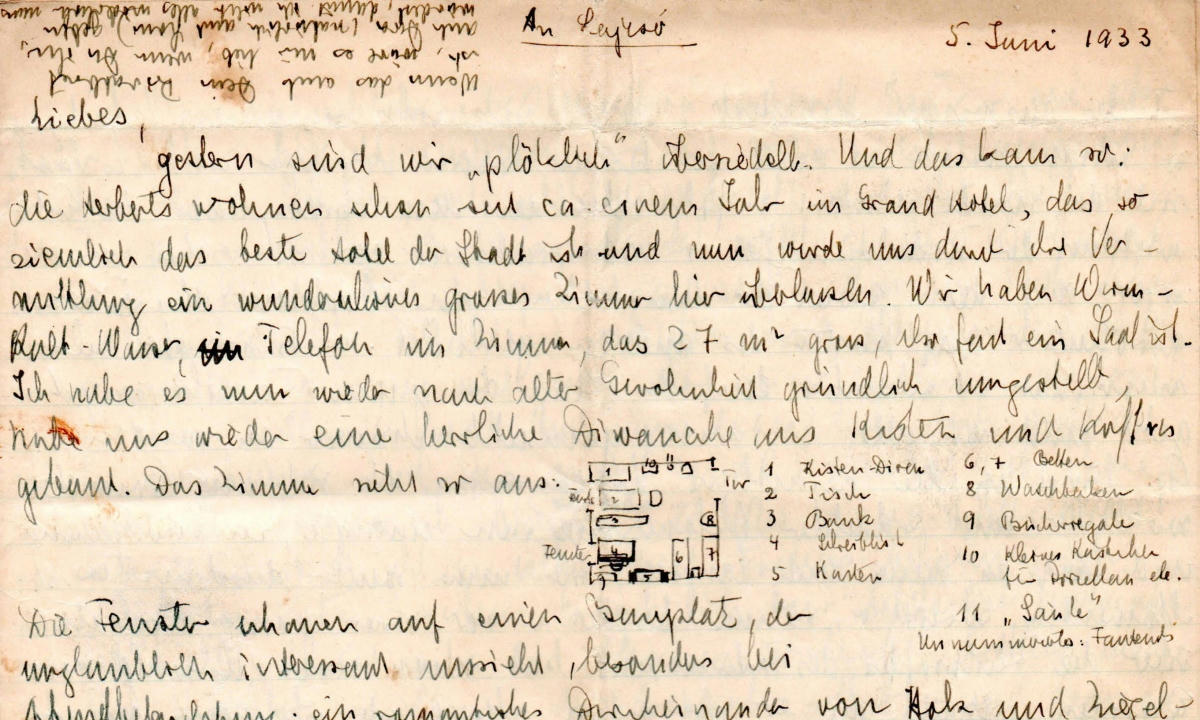 For more than a year, Lukács and Bortstieber stayed at the Moscow Grand Hotel, which was “about the best hotel in the city.” Lukács worked a great deal, and, according to his wife, made “heaps of money” (einen Haufen Geld). Bortstieber was busy as well, mostly editing articles and books on economics, but she was also commissioned with the German translation of works by Lenin. Ferenc, a future engineer and economist, worked at a Moscow machine-tool factory, where he introduced several innovations and had registered a number of patents. His employer provided him with accommodation, which he shared with Anna once she arrived in Moscow.

The Grand Hotel was a Comintern facility housing many emigrés. Lukács and their Hungarian friends lived on the same floor. While the letters suggest that they were content with this arrangement (their 27-square-meter room was “marvelous,” equipped with cold and hot water and a telephone), they longed for an apartment of their own, which, at that time in Moscow, was almost impossible to come by. Incidentally, it was “a true misfortune” (ein besonderes Pech) that they lived in the city center, where there were frequent demonstrations and funerals, which often forced them to wander about for hours before they could finally return home.

In the correspondence of the first Moscow years, their accommodation is an oft-recurring topic. Again and again, the matter of the coveted “final” three-room apartment is put off for weeks and months. They somehow managed to get a two-room flat (which they shared for some time with the previous tenant couple), but a year later they had to move on. Typical of the conditions of the time, Bortstieber writes in a 1937 letter quite enthusiastically about soon “getting a two-room apartment with running hot water.” 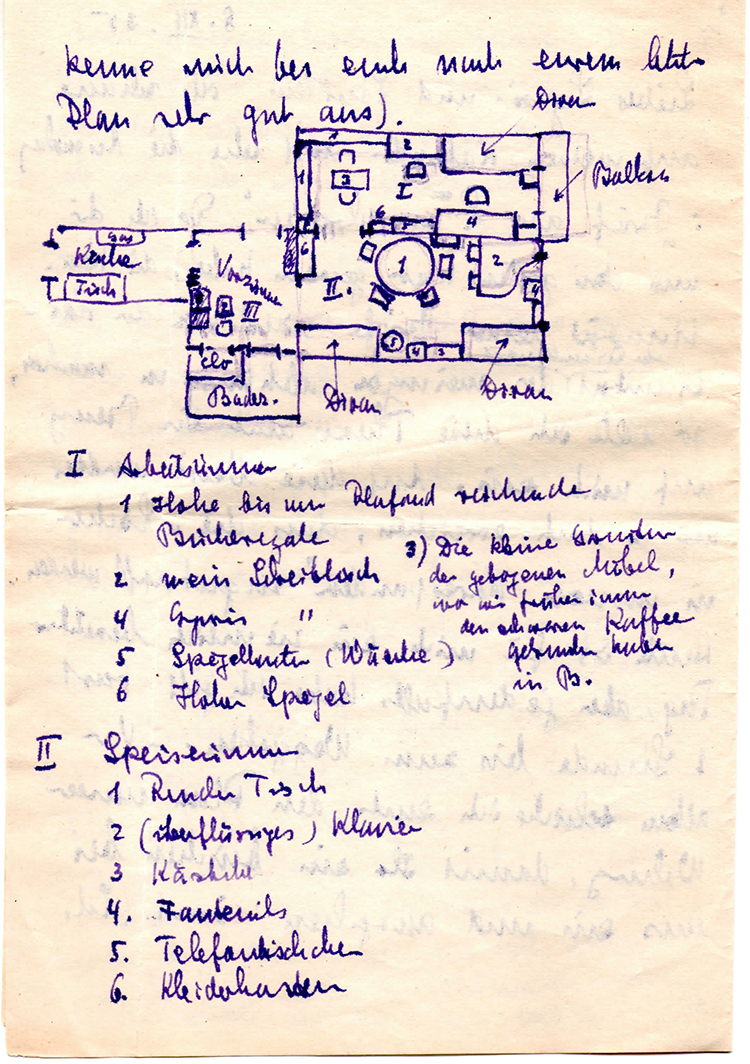 These arrangements may be relevant for the history of Lukács’s works written in Moscow. It was here that he wrote his influential The Historical Novel, in 1936–1937, while numerous studies and prefaces to new editions of Goethe, Schiller, etc., were also born here. In her letters from 1933–1934, Bortstieber highlights repeatedly that since they shared the same desk for their work, she could work only during the morning hours, from 6 to 9 a.m., while Lukács slept, after which she had to give over to her husband, who then mostly worked through the day. As a consequence of their pocket-sized dwelling, Bortstieber not only catered to Lukács (sometimes with the help of a maid), but she also participated in his work: once Lukács was done with writing down his notes, he would dictate to her, often until late into the night, as she typed up to 20–25 pages on a single day. Then, again, Bortstieber would have to get up early, so that she could go on with her own work, at the shared desk. No wonder that this tight schedule (“time slips through my fingers”) had her constantly tired, and took its toll on her health. During their rare vacations, when Lukács took a strict break from work, the couple would take the occasional holiday week with several hour-long daily walks and much rest (in the autumn of 1934, they spent a month by the Black Sea at state expense), which benefited Lukács as much as Bortstieber.

She felt confident that her son Lajos, whom she initially tried to “get out to” Leningrad to work together with one of the bigger names in Soviet physics, was in good hands in Berlin and then in London with his physicist wife, Leonie (Loni, Lony). It made Bortstieber extremely proud to see Lajos’s academic career progressing rapidly.

Bortstieber helped the occasionally ailing Ferenc overcome his first love affairs until he met Anja, whom he secretly married in 1935. She also enthusiastically supported him in his factory work, in addition to his evening classes in which he was enrolled, from 1937 on. Both Ferenc and Anja were frequent guests in the home of Lukács and Bortstieber, either for lunch or just to rest a bit.

Anna, who by the mid-1930s had suddenly grown up, worked in a factory, easily learned Russian, and was an excellent student, usually at the top of her class. Her different admission exams and exam periods, which mother and daughter worried through together, are recurrent themes in the letters. At the age of 16, Anna decided to become a chemist (a dream she later fulfilled), and a year later she began her studies at an unspecified “chemical institute” (ein chemisches Institut) in Moscow.

At the same time, Bortstieber strived to discover and apply the dialectical method in her academic work as well as in other fields, as is apparent in her letters: she repeatedly asks Lajos to integrate dialectics into his work as a physicist as much as possible. In 1934, she remarked: “The fact that you and Loni are preoccupied with dialectics in your studies of physics is something I deem very important.” 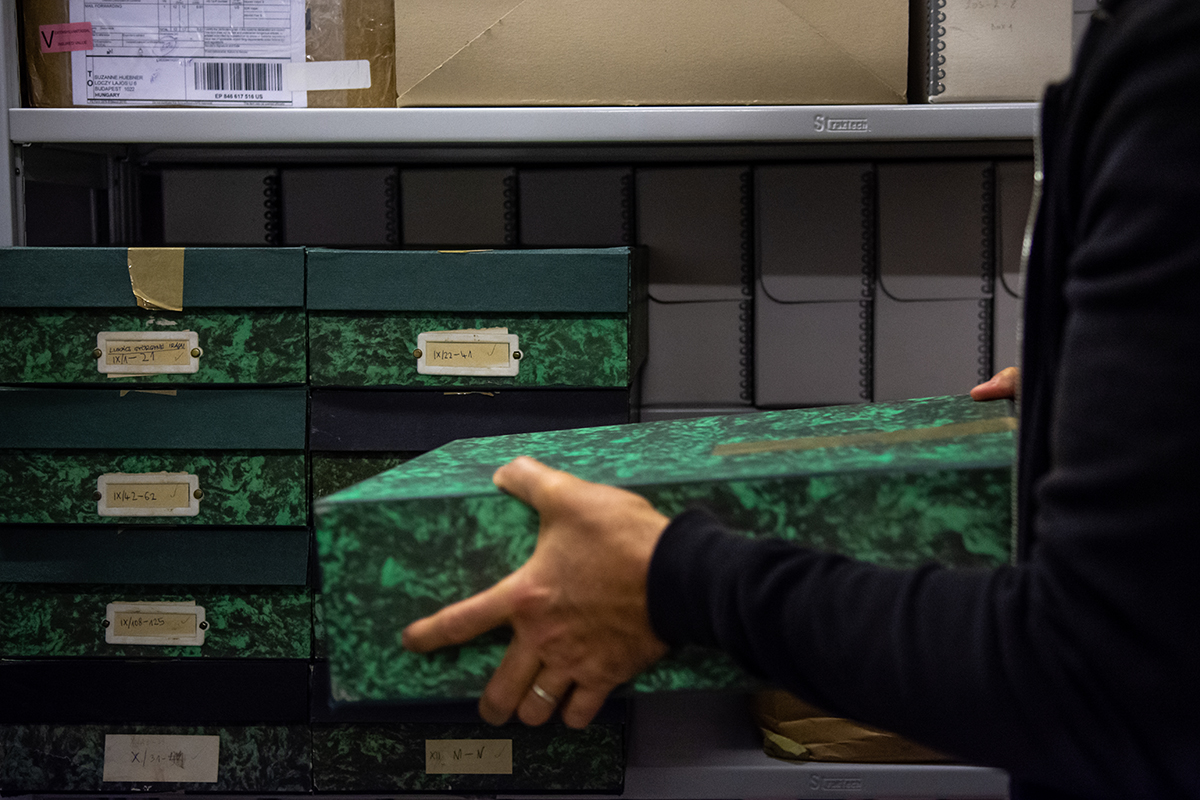 Relocated to Blinken OSA after the closure of the Lukács Archive, the thousands of pages making up Gertrud Bortstieber’s estate also include her hand- or typewritten manuscripts on topics in mathematics and economics. Her primary fields of research (judging from the works that are part of her estate) were: production and productivity; capital; pricing; consumption; economic growth; the comparison of socialist and capitalist economy. Her works are mainly in German, with a number of pieces in Hungarian, Russian, English, and Italian.

The estate also comprises several hundred letters, including Bortstieber’s extensive family correspondence (she frequently exchanged letters—written in Russian—with her other son as well, for instance when he was deported to Siberia during World War II). Beyond that with family members, her correspondence is numerous and noteworthy, including, among others, Cesare Cases, Tibor Déry, Milán Füst, Giulio Einaudi, Walter Janka, Emil Grandpierre Kolozsvári, Thomas Mann, István Örkény, and Bence Szabolcsi. This collection, which is already known to researchers, is now complemented by the 145 letters and excerpts recently donated by the family to Blinken OSA. Besides the letters written from Moscow to her son, they also include the messages Bortstieber sent to her family between November 1956 and March 1957, from the Yugoslav Embassy in Budapest and from Snagov, Romania.

According to the will of Gertrud Bortstieber’s grandchildren, the estate will soon be accessible for research at Blinken OSA.

Translation of quotes from German correspondence by the author.
Source of Lukács quotations: Georg Lukács, Record of a Life. An Autobiographical Sketch. London: Verso, 1983.