“Millions in Europe Speak Out for Peace. What Do You Do?” The Dialogue Peace Group Was Established 40 Years Ago 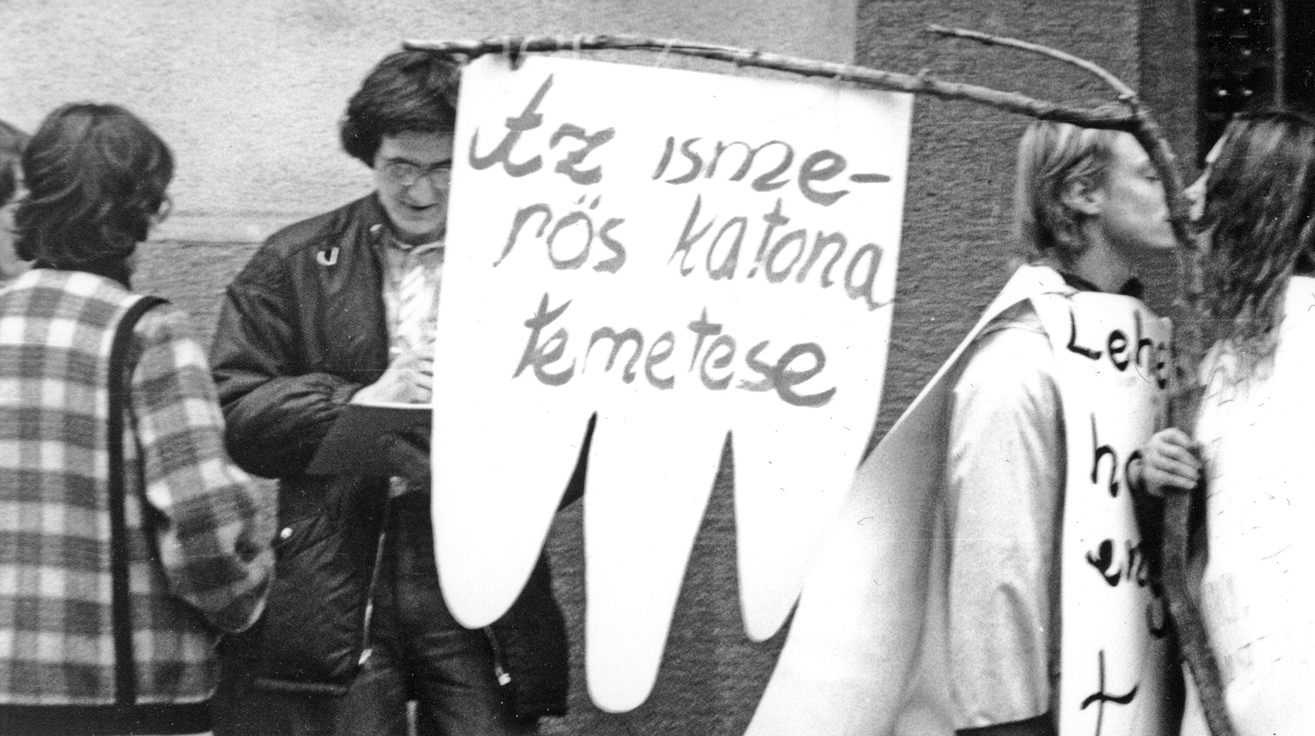 The Dialogue Peace Group was established, after some prior planning, at a gathering on June 26, 1982, 40 years ago today, according to most contemporary sources and historical research. At the time, there were the wide-ranging international peace movements of the West, while on the other side of the Iron Curtain there was the “peace-fighting” peace movement of Socialist countries. In Hungary, the National Peace Council played the role of the official, thus exclusive and centrally managed peace movement. As an independent peace movement, the Dialogue Peace Group wished to form a bridge between these not-quite-matching trends, and to initiate a conversation across the Cold War division.

Forrás. [Source., or Boiling point] is a blog series by the Blinken OSA staff at the Hungarian news website 444.hu. This post presenting a newly digitized photo collection documenting a 1983 Dialogue Peace Group street happening originally appeared on the 40th anniversary of the group’s inaugural gathering on osaarchivum.444.hu. 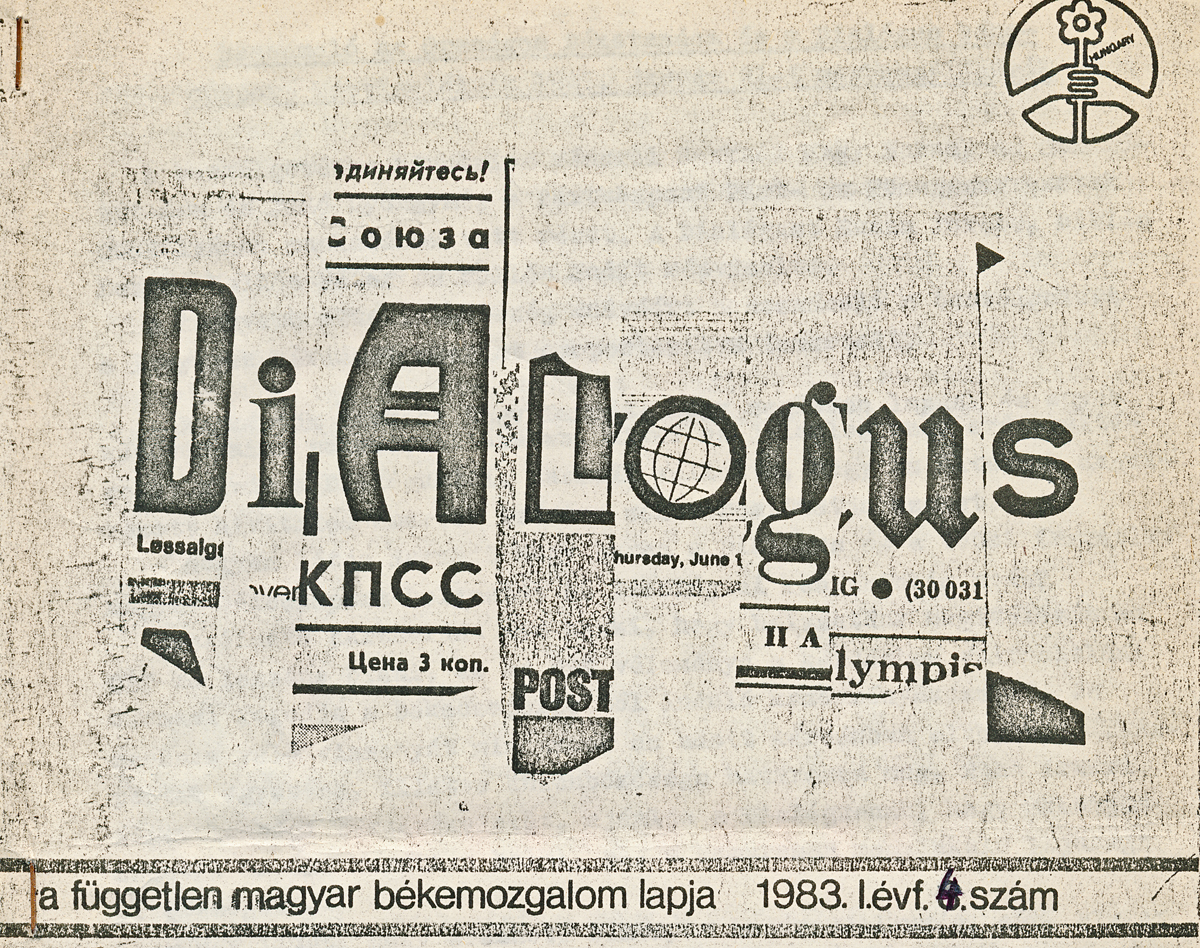 The Dialogue Peace Group had its own journal; issues were first presented to the National Peace Council, then circulated only among members. The cover is a montage of Western and Eastern newspapers headings, with the group’s logo (also distributed as a badge) in the upper-right corner.
(HU OSA 361-0-11 András Hegedűs Personal Papers, Complete Newspapers)

Their activity consisted mainly of organizing public lectures and discussions, camps and excursions. To their above-mentioned first (inaugural) meeting, to promote the dialog also emphasized in their choice of name, they invited well-known intellectuals and Communist politicians, as well as the National Peace Council. Several of their programs, however, revolved around Western peace movement figures, while Dialogue members also visited (or tried to visit) similar events in the West.

The group consulted with the influential cultural politician György Aczél twice, and the National Peace Council housed several of their programs. Here, they presented their demands in November; to remove foreign soldiers from all European countries (which included Soviet soldiers in Hungary), to remove Soviet nuclear weapons from Hungary (the existence of which the state had always denied), and to replace tanks and other means of combat with defensive weapons. What distinguished the group from the National Peace Council was the principle of mutual responsibility and bilateral nuclear disarmament. In their manifesto Dialógust (Call for dialog), published in December, they denounced the “East–West confrontation,” and demanded the conditions for mutual trust and freedom of expression to be provided (echoing the 1968 essay of Soviet dissident Andrei Sakharov, in exile at that time).

To maintain the dialog, the group’s membership carefully distanced itself from the emerging democratic opposition, and, for example, decided not to make statements in samizdat journals. They strived for transparency to avoid even the semblance of conspiracy. After all, they did nothing illegal; like state propaganda, they called for peace. Before the official Peace March on May 7, 1983, Dialogue members submitted their banners in advance to the the Kommunista Ifjúsági Szövetség (Communist youth organization, KISZ). As a result, ca. 400 Dialogue members officially joined the 15,000-strong crowd, carrying messages such as: “Europe needs no curtain,” “No nukes in Europe,” “мир PEACE,” and a letter addressed to Moscow and Washington saying, “we want to still live, work, learn, love even in 1993.” At the end of the parade, the group performed a Western-style “die-in,” mimicking the consequences of a nuclear attack. 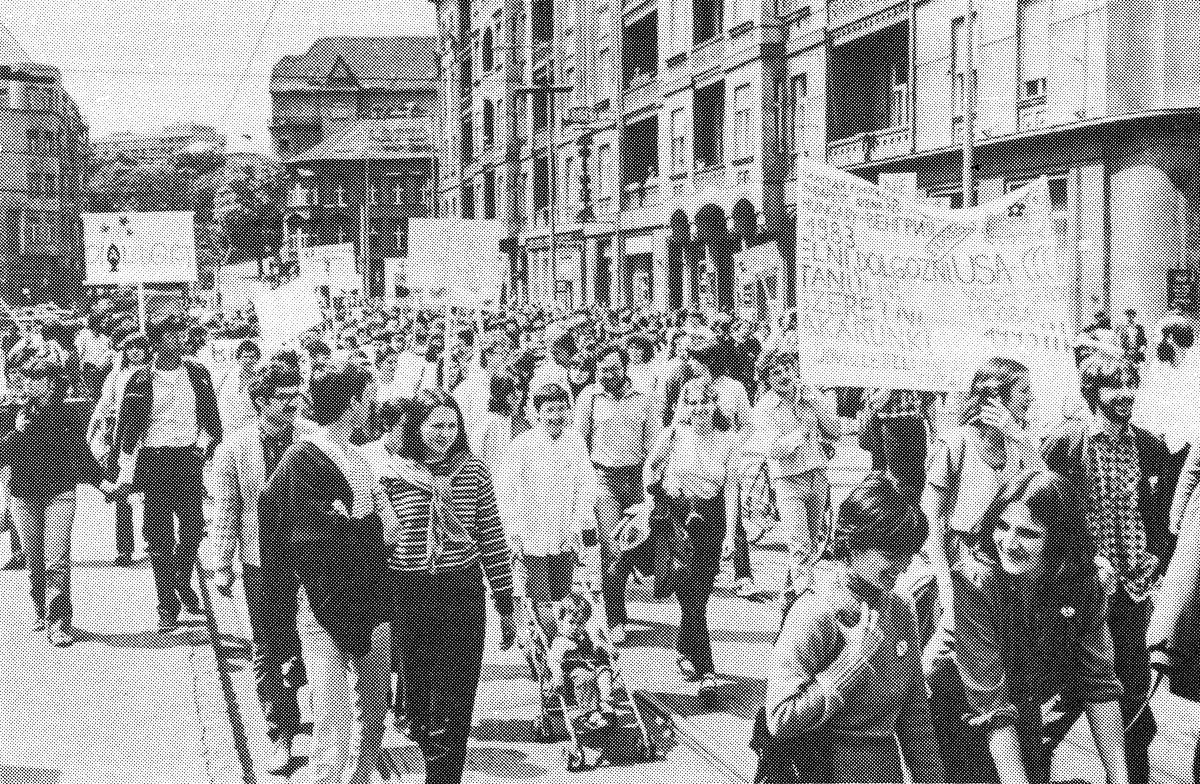 The Dialogue Peace Group at the official Peace March on May 7, 1983. Published in the journal of the European Nuclear Disarmament (END), a Western peace movement organization that maintained close ties to the group, the photo features banners, as well as the badges worn by members.
(HU OSA 361-0-11 András Hegedűs Personal Papers, Complete Newspapers)

Eventually, the state became disturbed with Dialogue, and not simply for their ideas differing from the central message, or because of their Western connections. The emergence of an independent Hungarian peace movement as such was just as “threatening,” especially since its membership predominantly consisted of young university and secondary-school students who, at the same time, were not particularly characterized by dissent or anti-Communism. Furthermore, the movement spread rapidly; within months, Dialogue groups popped up in towns like Debrecen, Eger, Nyíregyháza, Pécs, Szeged, and Szombathely, membership soon exceeded 1,000.

The above may have been what catalyzed the series of state security actions launched to undermine their activity. At first, the National Peace Council attempted to incorporate the group (meaning, to eliminate their independence), and when they refused, the Council established its own youth organization, thus putting an end to future cooperations. Meanwhile, Dialogue members or their parents across the country were summoned to so-called “conversations,” and received “benevolent warnings” or open threats that by continuing their activities, they risked their studies or employment. Finally, when the police collected and expelled several foreign guests of a peace camp the Dialogue group organized in July 1983, and some Hungarian activists had their passports confiscated, the membership realized: although they did not divert from their initial—hitherto accepted—ideas, legal and safe operation became impossible for them.  At a July 9 meeting, the group disbanded itself. 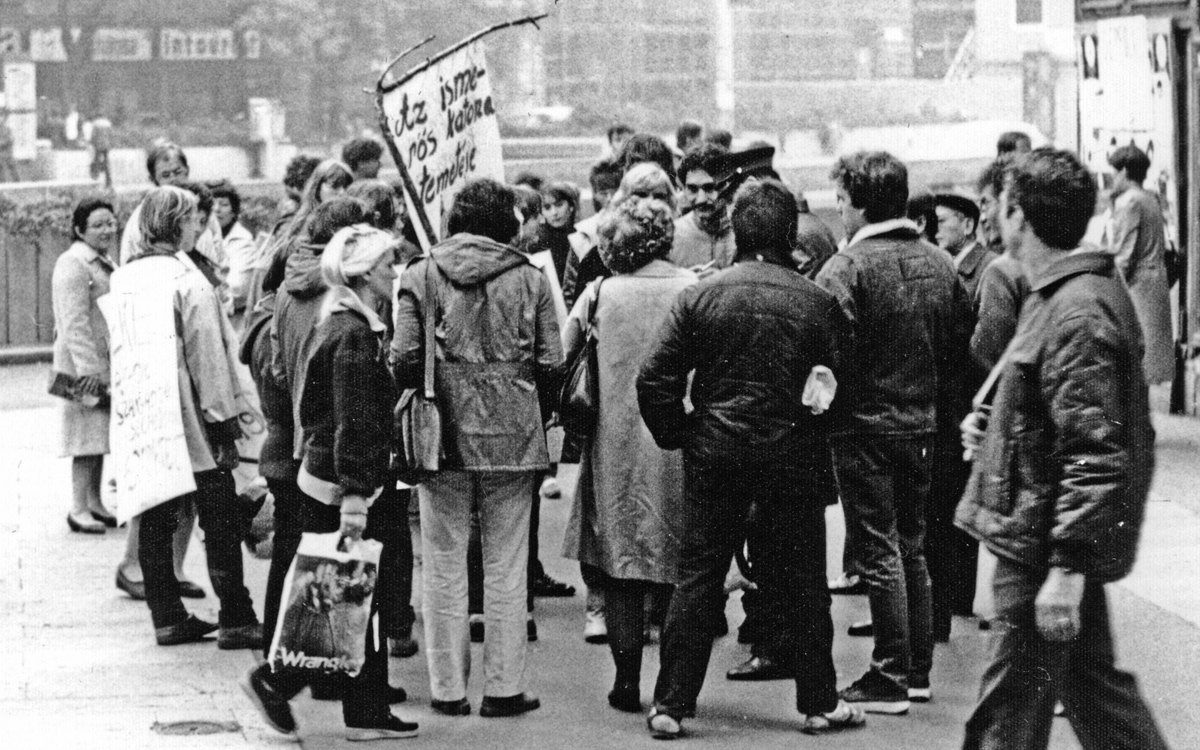 However, not everyone agreed with the dissolution. The youngest, more radical part of the membership soon began to organize themselves again, this time with more emphasis on appearing in public spaces. The Blinken Open Society Archives (at CEU) received a detailed photo documentation of such a street happening held on October 29, 1983, titled Funeral of the Known Soldier. The photos were donated to the Archives by Zsolt Enyedi, professor and former pro-Rector at CEU, who was a member of the group at the age of 15–16.

“The activists remaining despite the dissolution were typically less bothered by being associated with the democratic opposition,” Enyedi recalls of the Dialogue group’s post-July 1983 period. “These gatherings were more anti-regime character than before, it was always possible, for example, to buy samizdat publications.” Membership initially dropped to about 50, but by autumn it had reached 300, with eight separate groups nationwide. Meanwhile, police harassments continued: according to Enyedi, “it was clear that there was a risk, but also that this was among the most amicable types of dissent, and with so many young people in the movement, we suppressed fear with partying.” The photos capture a happening, titled the Funeral of the Known Soldier, which took place on October 29, 1983, one day with an anti-war mass demonstration in the Hague attended by half a million people. “The original idea was that there would be more groups performing different actions in different parts of the city,” Enyedi says of the event. “For various prosaic reasons, the others realized only one, small action in the end.” 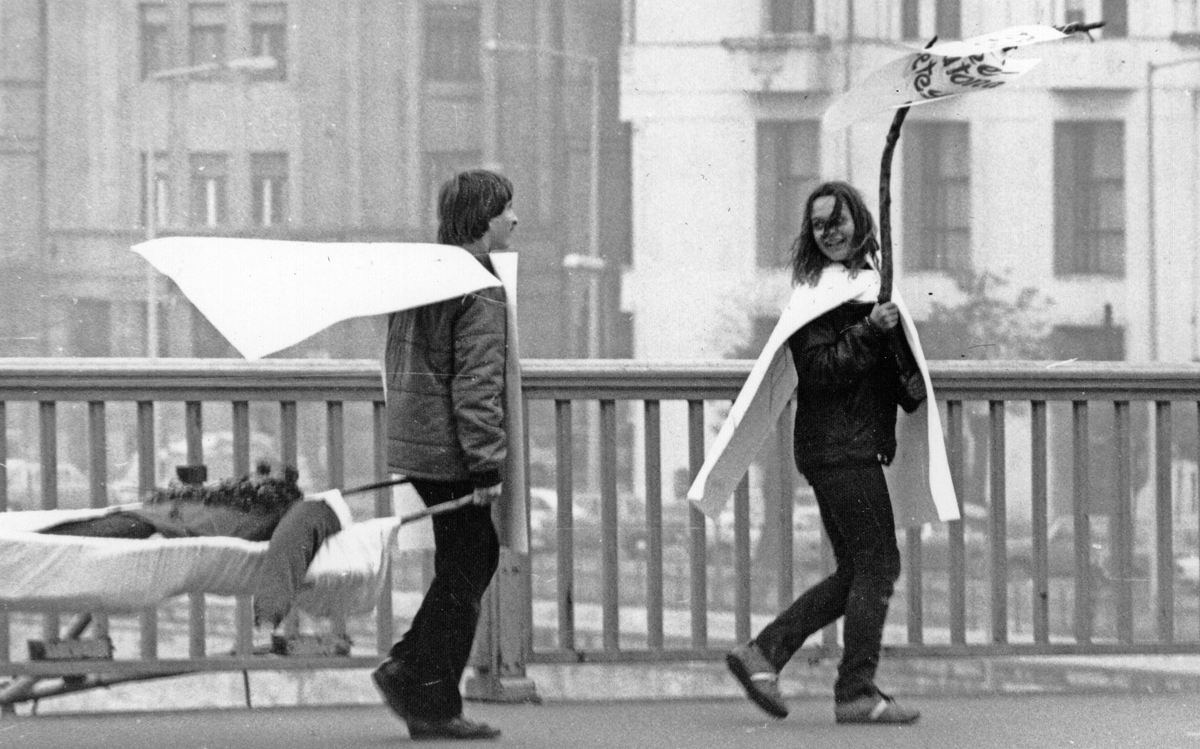 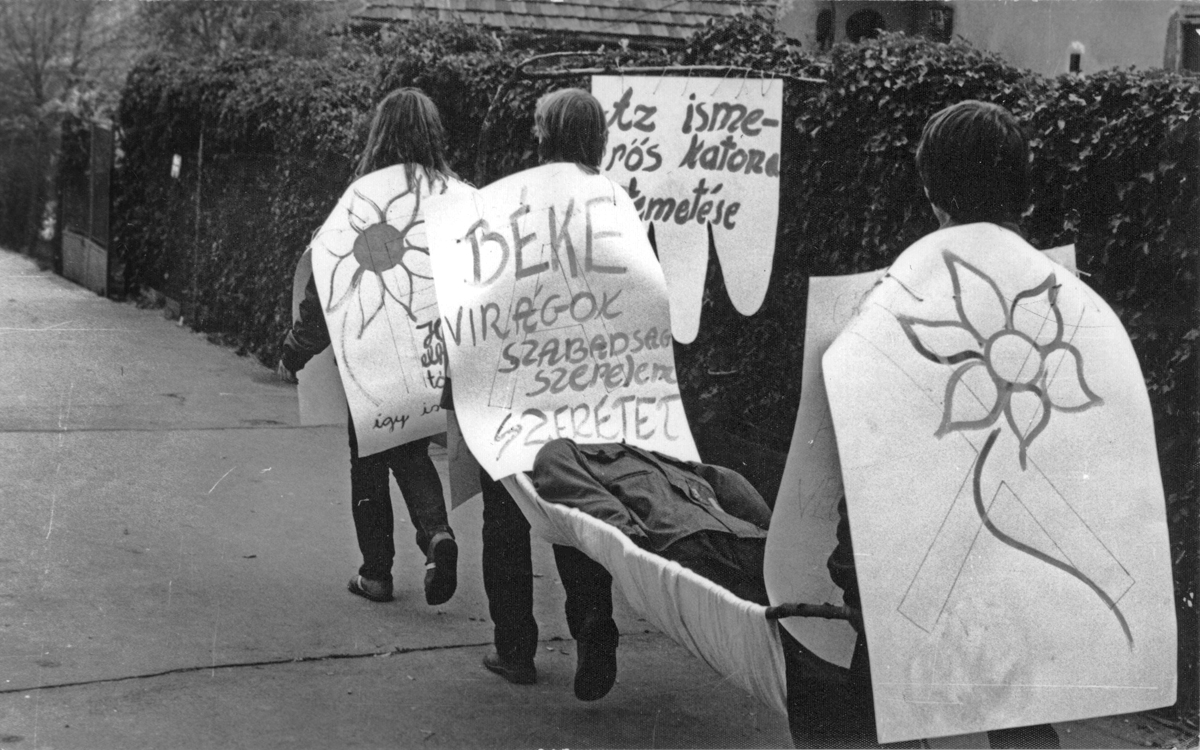 Wrapped in white banners, Enyedi and his two friends performed the Funeral of the Known Soldier carrying a military puppet; they marched through Budapest downtown, from Moszkva Square (today’s Széll Kálmán Square) to Felszabadulás (Ferenciek) Square, singing peace songs. According to a summary published in the new journal of the relaunched group, мир/PEACE, the happening ended when “the police asked for our IDs, and more and more people came to defend us. ‘I wish to know, what kind of law is this against?’ ‘Tell me, on what right are you saying this, because next time I might do the same thing!’ An elderly lady: 'I don’t understand, we keep hearing it on TV and on the radio, everyone talks about peace, so what’s your objection?’ The policeman just shrugged.”

Revealing about the position of the Dialogue Peace Group, both Blinken OSA and the Historical Archives of the Hungarian State Security (Állambiztonsági Szolgálatok Történeti Levéltára, ÁBTL) preserve documents on their activity. Blinken OSA’s holdings include the archive of the Radio Free Europe/Radio Liberty (RFE/RL) Research Institute, a unique media collection from both sides of the Iron Curtain. More than 100 English, Italian, German, and French press reports and news agency releases demonstrate the West’s keen interest in the promising start and the subsequent persecution of the peace group. Meanwhile, in the official Hungarian discourse, the group seemingly did not exist, the state propaganda did not mention even their participation in the May 7, 1983 Peace March. In Hungarian, only the samizdat periodical Beszélő, the Munich-based RFE, and the Paris-based Irodalmi Újság (Literary journal) covered the group’s activity. 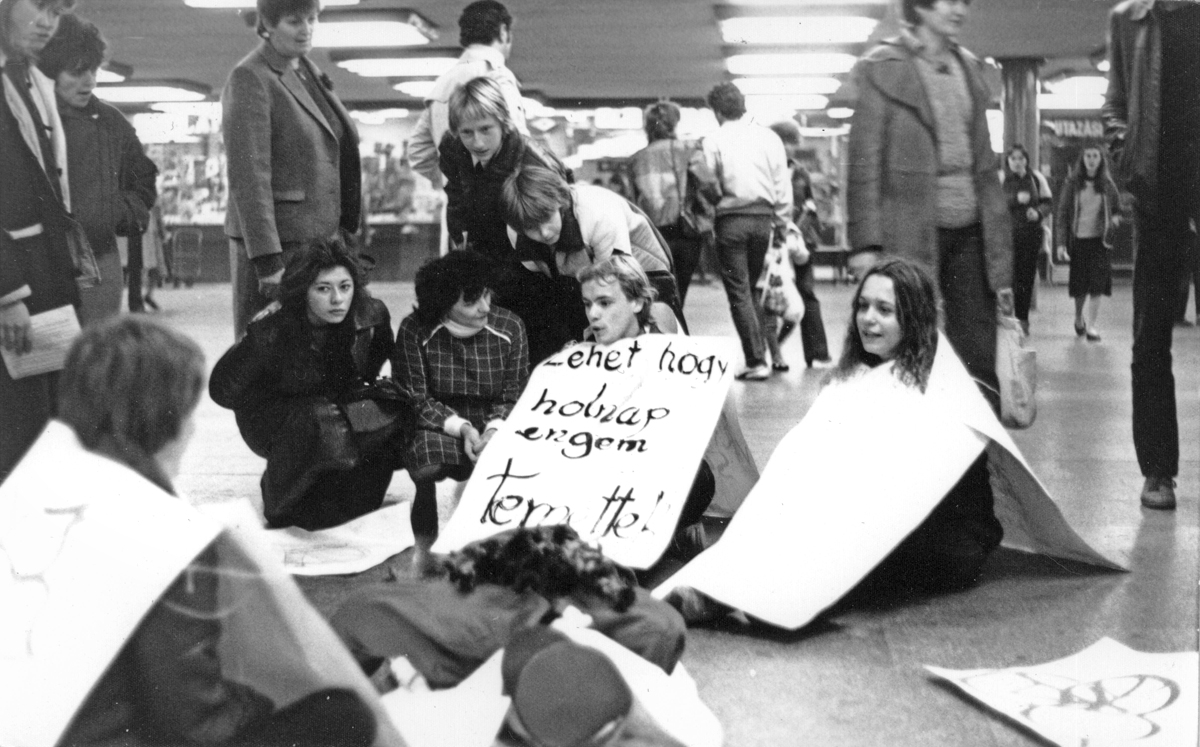 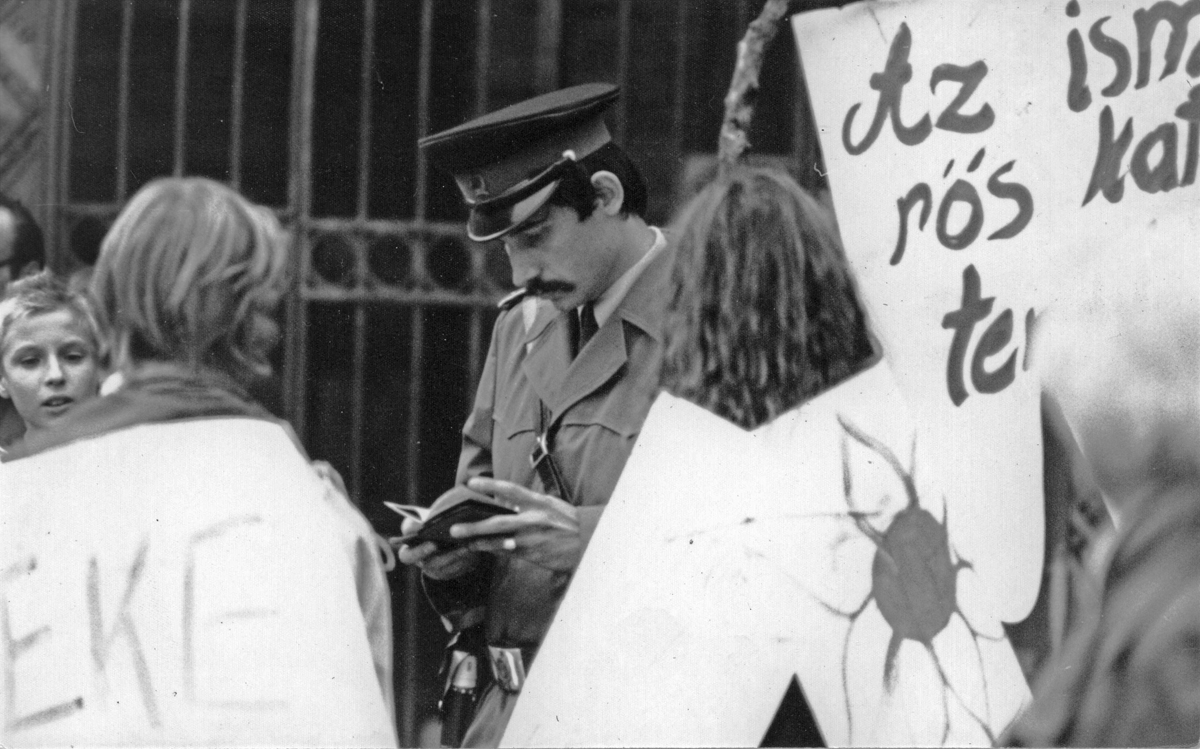 ”Tomorrow may bring my funeral” – Funeral of the Known Soldier, October 29, 1983.
(HU OSA 462 Photographs of the Dialogue Peace Group)

ÁBTL however, preserving the records of the state security, has a large collection on Dialogue in Hungarian. As Krisztián Ungváry writes in his study uncovering the history of the Dialogue Peace Group from the point of view of the Ministry of Interior, “the police officers involved in the case produced about 30–40 volumes of investigative files, in an average length of 250 pages, deployed a wide variety of operational techniques, and mobilized some 30–40 agents, in order to break a peace group that, instead of merely preaching about it, had taken nonviolence seriously.” Why? The documents examined by Ungváry suggest that the motivation behind the “operational games” was, among other things, an assumption that “these groups may even become a direct supply base for the hostile opposition.” Apparently, this indeed was achieved. According to Ungváry, “as a result of the renewed harassment of still persistent activists,” the Dialogue Peace Group ceased operations permanently in January 1984. 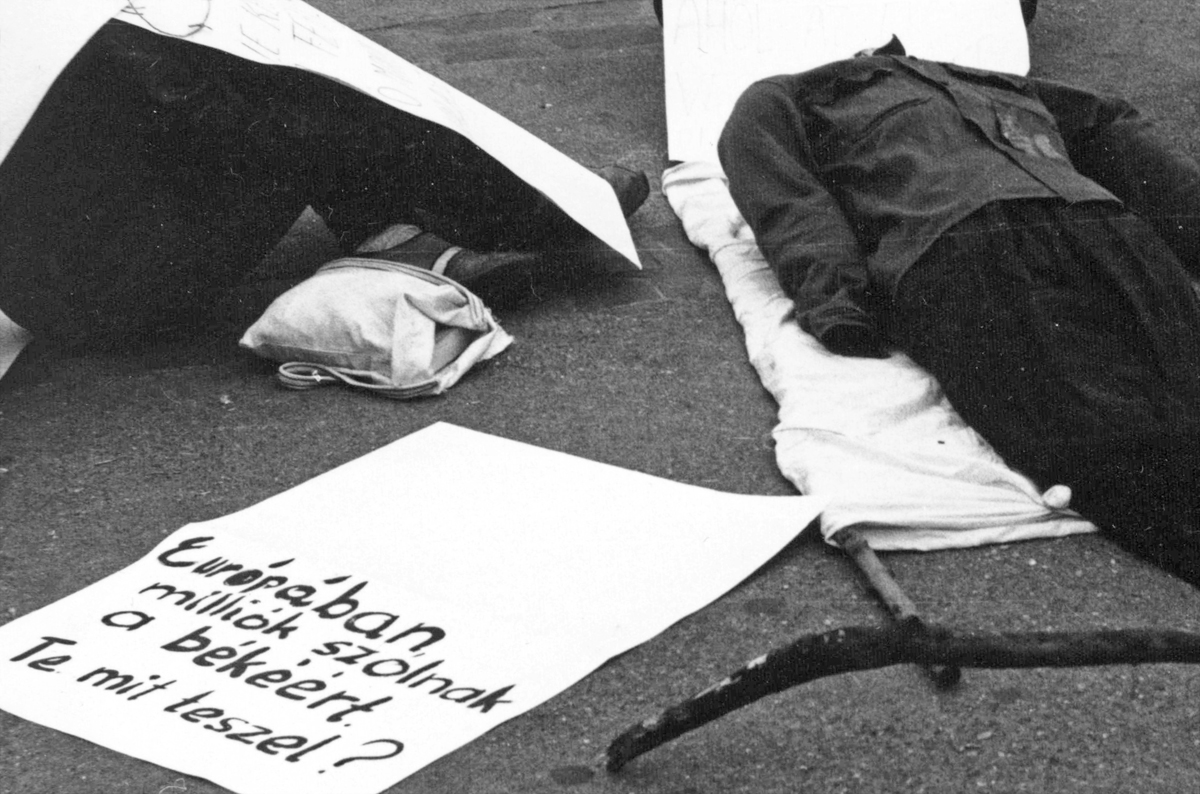 “Millions in Europe Speak Out for Peace. What Do You Do?” – Funeral of the Known Soldier, October 29, 1983.
(HU OSA 462 Photographs of the Dialogue Peace Group)

The series of 29 photos has been digitized by Blinken OSA, with the collection accessible in our Research Room (temporarily on the 3rd floor of the CEU Library) and on the OSA Research Cloud. More details here.