Even though the Cold War was a multipolar and multi-aspect geopolitical tension between rival superpowers and their allies, when referring to the postwar world order, one most often thinks about the strictly defined positions of the United States and the Soviet Union, non-aligned and satellite countries. Contrary to this, archival material at the Vera and Donald Blinken Open Society Archives, including the most recently processed series on non-ruling Communist parties, reveal the complexity of agencies and agendas within every ideological and geopolitical block, monolithic at first glance. Moreover, brought together with the subfond Western Press Archives, the documents highlight that cross-border dissemination or international reach and resonance were all possible for political matters originating in the Soviet Union and broadly discussed in the West.

Among the topics that drew the most interest were the activity and persecution of Soviet dissidents. Andrei Sakharov, a leading nuclear physicist who during the 1960s became politically active in promoting disarmament, peace, and human rights, was on the radars of Western press and, as archival material at the Blinken OSA demonstrate, also of Communist politicians in Western European countries, including France, Italy, and Belgium.

On July 22, 1968, the New York Times published Andrei Sakharov’s essay “Thoughts on Progress, Peaceful Coexistence and Intellectual Freedom.” In what is often labelled his manifesto—previously circulated in samizdat publications and also read out and discussed in the Eastern European and Russian services of RFE/RL—, Sakharov called attention to the importance of intellectual freedom and its lack in the Soviet Union. He immediately became widely known in the West, but faced sharp criticism at home. After Richard Nixon came into office in 1969, and launched the politics of détente to avoid nuclear escalation, criticism of Sakharov took another curve. His opponents claimed that the scientist-dissident’s continuing resentment toward the regime obstructed the Soviet governmental efforts to expand the dialog with the West. 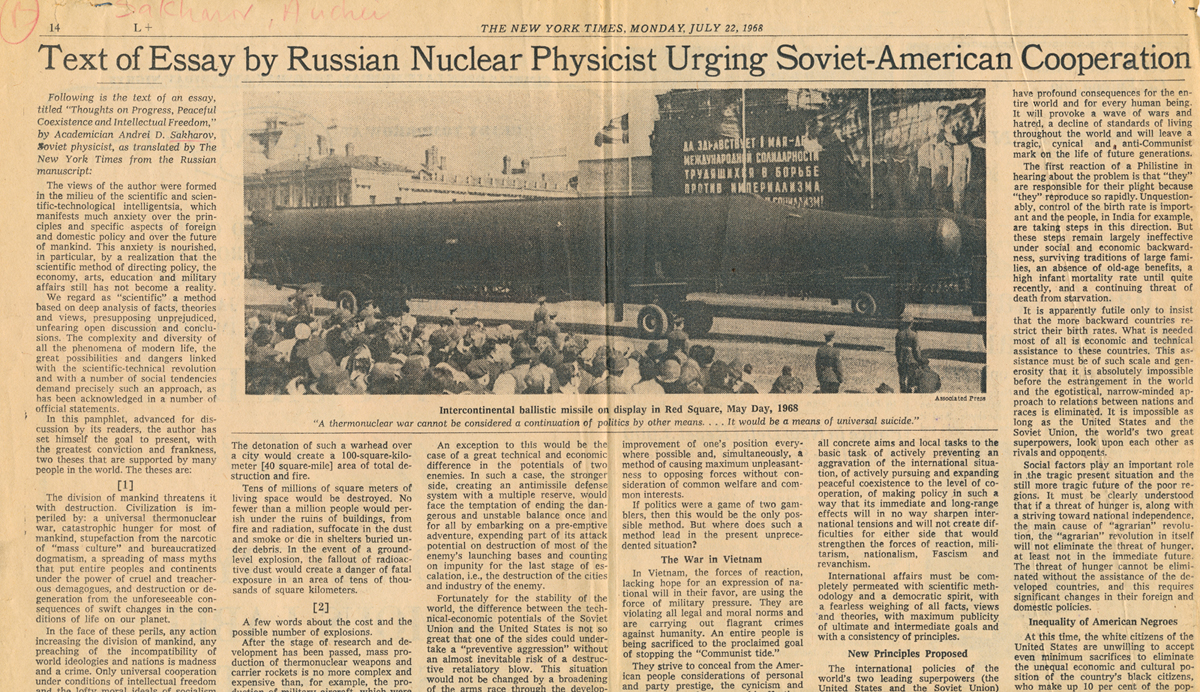 Sakharov’s essay “Thoughts on Progress, Peaceful Coexistence and Intellectual Freedom” in the New York Times warned that mankind’s division would lead to its destruction, which can only be prevented through universal cooperation between the Socialist and the Capitalist worlds, the elimination of dogmatism, and the protection of intellectual freedom.
(HU OSA 300-120-5 Records of the RFE/RL Research Institute, Western Press Archives, Biographical Files )

In late August 1973, Sakharov held his first press conference for Western journalists, and stated that despite full-heartedly supporting détente, he felt obliged to warn the West that the USSR remained a closed state that may act in unexpected and extremely dangerous manners. A week later, Sakharov was contested by his fellow scientists of the Soviet Academy of Sciences, who published a condemning letter in the Pravda. Two days later, another open letter followed, this time by Soviet writers, who attacked both Sakharov and dissident writer Alexander Solzhenitsyn, claiming that they had slandered the Soviet state and social system, and by doing so, had called on the West not to engage in détente, but continue the Cold War treatment of its counterpart. This, besides other concerted campaigns against dissent in the USSR, became known as “the Sakharov case” or “the Sakharov affair.”

Western journalists reported on “the Sakharov case” from a unanimous position of support. This is apparent in the archival subfond Western Press Archives, compiled at the Radio Free Europe/Radio Liberty (RFE/RL) Research Institute, which contains clippings mainly from Western press sources on personalities world-wide and subjects relating to the five Eastern European target countries. After facing numerous attacks and censorship in the Soviet press in 1973, Sakharov held several improvised press conferences for Western journalists, often in his own apartment. The physicist-dissident claimed that contrary to what open letters in the Pravda alleged, it was the propaganda campaign against him that actually had harmed the détente process. This, according to Sakharov, was reckless, provided the Soviet authorities truly had ceased to pursue international tension as their principal aim. Sakharov emphasized that he couldn’t understand the campaign against him, especially the reasons behind the evolution of its tone from menacing and ferocious to imploring. Overall, the campaign’s screaming headlines echoed that both Sakharov and Solzhenitsyn were unpatriotic. As a last warning, noted Western journalists, they were, in the eyes of the Soviet public, both accused of treason. 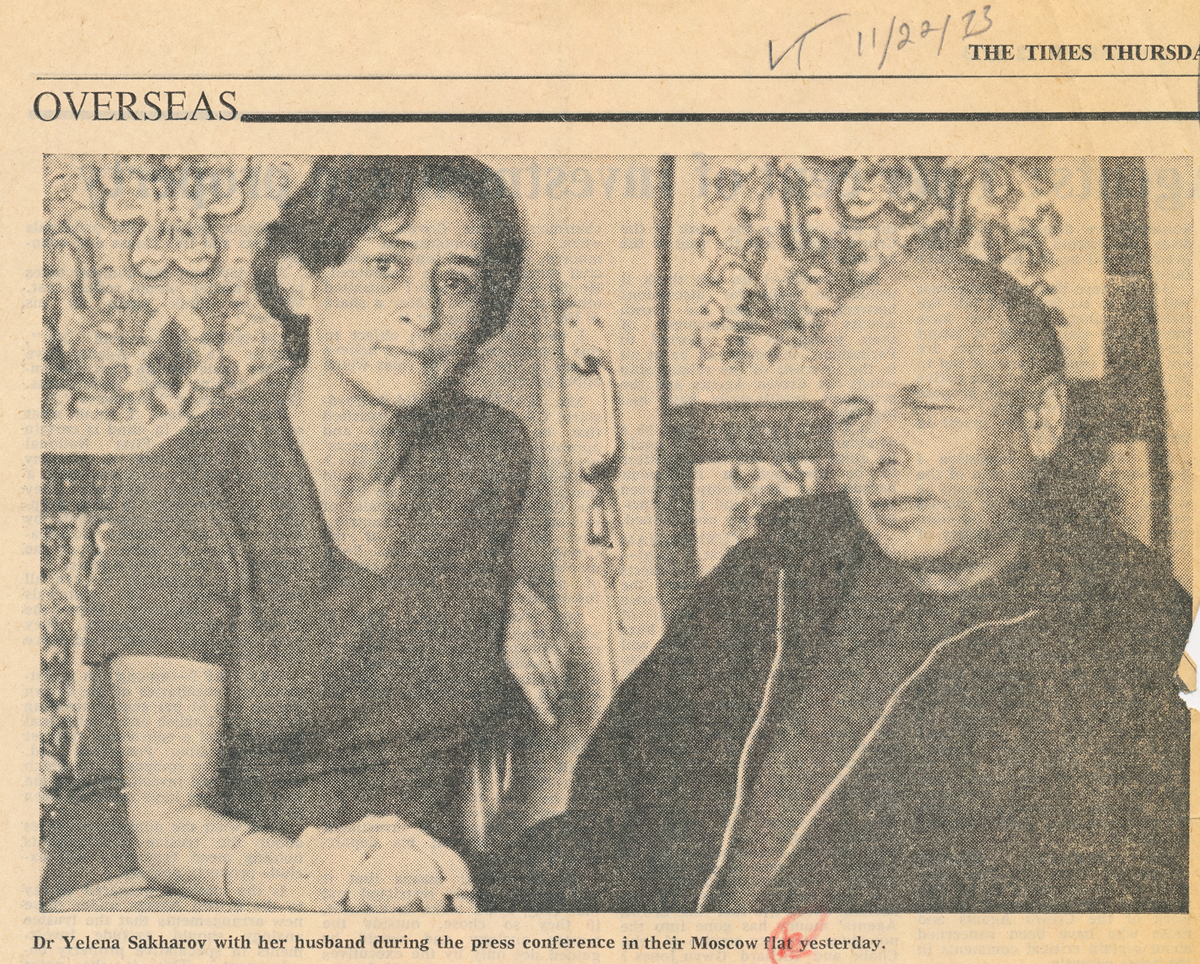 While Western journalists supported the dissidents in a single voice, things were not so clear-cut on the political front. The archival series Records of Kevin Devlin and the Communist Area Analysis Department on Non-Ruling Communist Parties brings invaluable information about the history of Communist parties in Western Europe in the context of the Cold War. The series contains materials collected and produced from 1950 to 1990 by the Communist Area Analysis Department, an office within RFE/RL examining non-ruling Communist parties. The documents (press clippings and summaries, biographies, RFE/RL analyses, congress materials, diplomatic reports, and office documents) cover virtually all the Communist parties in non-Socialist countries, offering new information on the local particularities and the transnational issues of Communist parties from all over the world. The office constantly scrutinized the relationship between Western Communist parties and the Soviet Union, and closely followed the dissidents’ activities and especially the reactions of Western Communist parties to various dissident affairs. Consequently, the series contains files on mathematician Leonid Plyushch, human rights activist Vladimir Bukovsky, film director Sergei Parajanov, physician Yuri Orlov, and, as mentioned above, Andrei Sakharov.

Western Communist reactions to “the Sakharov case” during the 1970s clearly demonstrate contradictions between the French and Italian Communist parties in treating the politics of the Soviet Union. While the Italian Communist Party (Partito Comunista Italiano, PCI) created its own version of Communism, named Eurocommunism, and was more independent in its policies, the French Communist Party (Parti communiste français, PCF) closely followed the directions imposed from Moscow. In 1973, the PCF denied the orchestrated attacks on Sakharov and Solzhenitsyn. As a follow-up, the party encouraged the publication of several articles in the French press to “normalize” dissident repression, and accused the French government of conducting “a violent anti-Communist and anti-Soviet campaign . . . based on lies and falsifications.” In other words, as far as French Communists were concerned, the activity of the two dissidents challenged the progress of Socialism. 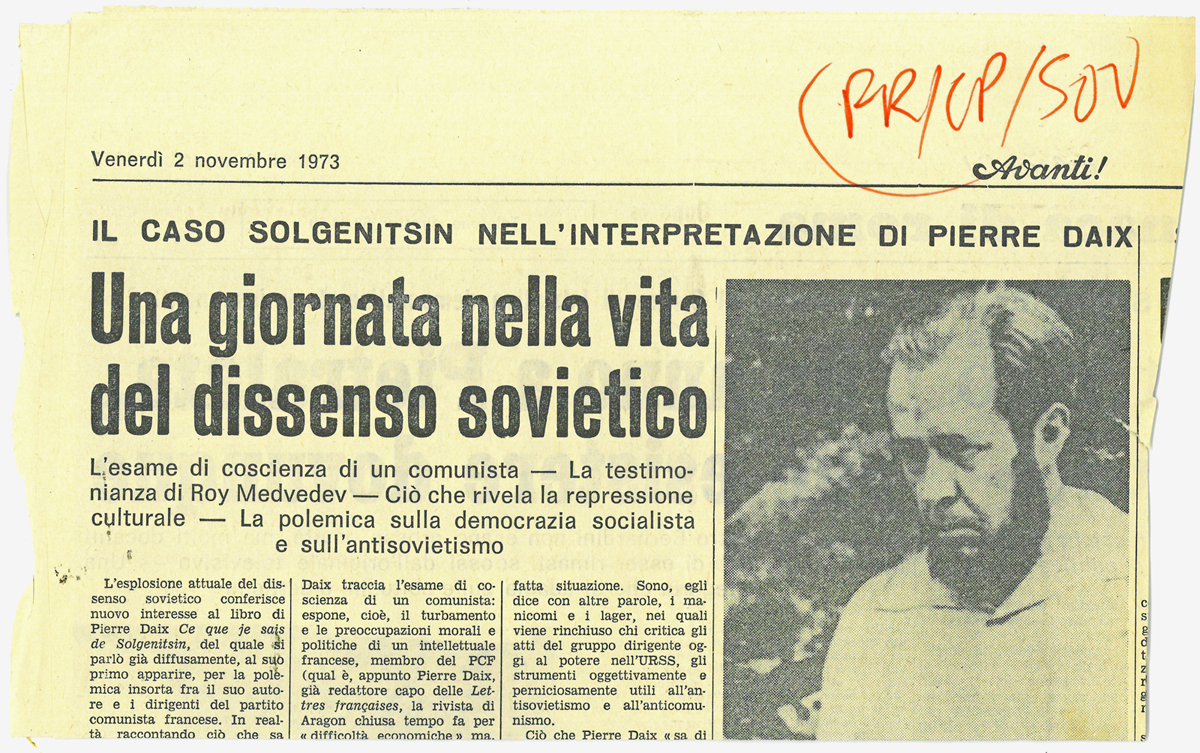 Yet, not all members of the PCF backed the official standpoint stated in the party daily L’Humanité. Pierre Daix, a key figure among French Communists, was in “total solidarity” with Soviet dissidents, arguing that they “were faithful to Lenin.” Nevertheless, his position did not influence public opinion. At the same time, another factor limited the visibility of Sakharov. In France, it was overshadowed by the publication of Alexander Solzhenitsyn’s Gulag Archipelago in French, which stirred substantially more debates in the cultural discourse.

The Italian Communist Party had a different standing on “the Sakharov case.” With the international campaign to nominate Sakharov to the 1975 Nobel Peace Prize gaining momentum, more politicians, including Western Communists, got involved in supporting the dissident. Once the prize indeed was awarded to him, Soviet authorities refused to issue Sakharov a visa to travel to Oslo to the award ceremony, which generated more comprehensive support. For instance, the leader of PCI, Enrico Berlinguer, publicly distanced himself from the Soviet Union’s policies. In the article “Il caso Sacharov” (The Sakharov case), published in the November 21, 1975 issue of Rinascita, Berlinguer stated that the USSR mishandled the dissident issue, and failed to recognize the rights of dissidents criticizing the structure of the Socialist state. The PCI also condemned that Sakharov had not received permission to travel to Oslo. Confronting the Soviet Union openly, Aldo Tortorella, a principal members and a MP of PCI, went even further; in the Chamber of Deputies he declared, “the PCI position is one of criticism and dissent toward methods damaging the freedom of culture and limiting political and ideological debate.” 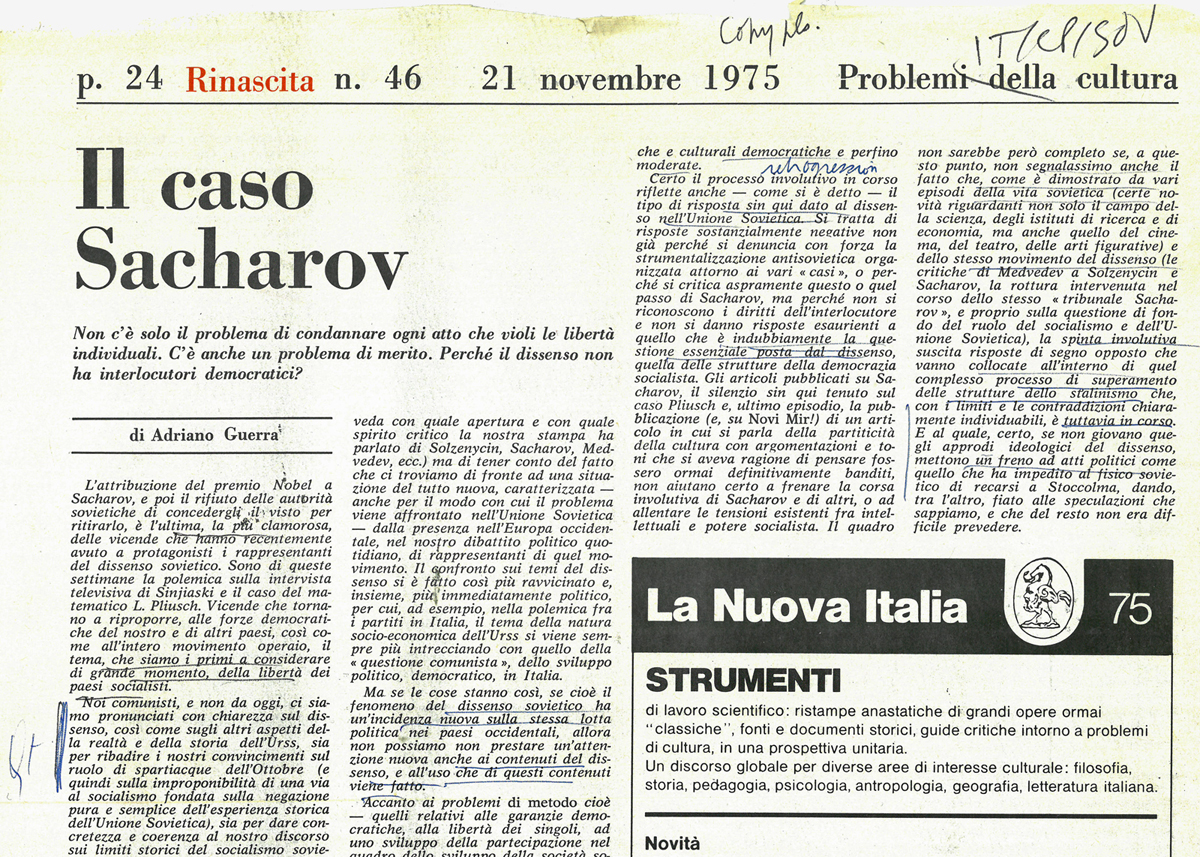 Meanwhile in Western press, it is notable that despite the global praise Sakharov received in 1975 owing to the Nobel Peace Prize, when interviewing him, Western journalists were primarily interested in the extent and the potential crisis of the Soviet dissident movement. In a report with the suggestive title “Why Sakharov Won’t Shut Up,” released in May 1975, Associated Press correspondent Frank Crepeau cited Sakharov reassuring the world that dissent in the USSR was not withering away. However, according to the famous nuclear physicist, it was wrong to speak of a movement. Continued arrests, trials, punitive confinement in psychiatric institutions, and emigration of numerous dissidents, impacted the visibility of dissidents as an entity. Yet, Sakharov believed that there would always be people to replace those who—willingly or not—left the scene. Further enquiries questioned the very nature of Soviet dissent; “a very narrow layer of a population” signed petitions and took part in protests. But how to count those who, although passive at a first glance, turned up at art shows exhibiting unofficial art, read samizdat publications, or visited last concerts of musicians the Soviet state declared a disgrace? For those thousands of invisible Soviet and international citizens, quietly dissenting from the oppressive regime, “the Sakharov case” stood as a warning, but also as a sign of hope.