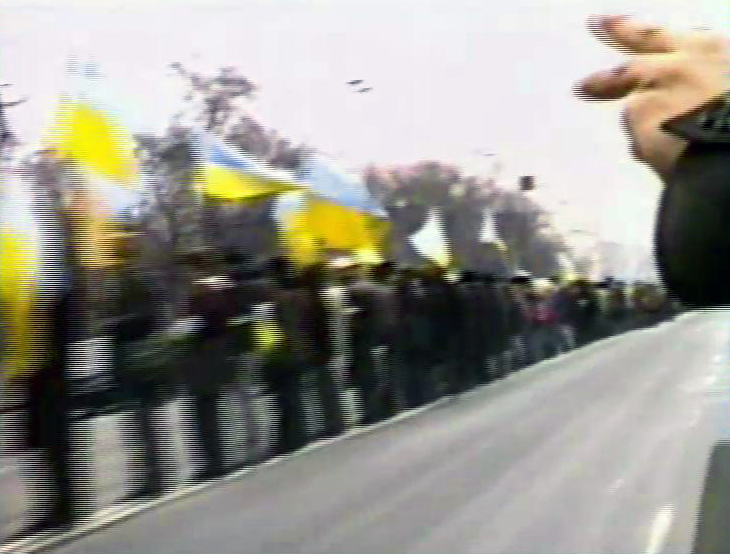 In two chapters, we revisit the milestones of the Ukrainian democratic transition following 1989. The first part, through archival television footage, recounted the country’s path to state sovereignty. Now we explore how Ukraine in 1991 declared its independence, and how in 1992 celebrated its first anniversary.

Forrás. [Source., or Boiling point] is a blog series by the Blinken OSA staff at the Hungarian news website 444.hu. This post originally appeared on osaarchivum.444.hu.

In late January, 1990, the civil-political movement Rukh and its affiliated parties called for the celebration of Ukraine’s Day of Unity (or Conciliarity). This initiative was an attempt to reshape the country’s memory politics. Instead of continuing to commemorate Soviet anniversaries, they aimed at considering January 22 a national holiday, honoring the 1919 signing of the Unification Act of the short-lived Ukrainian People’s Republic and the West Ukrainian People’s Republic. Rukh organized a human chain connecting Lviv to Kyiv with 500,000 people joining hands in a 700-kilometer line, demanding independence. Next year, in 1991, the date was celebrated again, with a prayer service and a rally on St. Sophia Square in Kyiv. (The day became an official holiday only in 1999.)

The Soviet press at the time lamented that these celebrations were welcomed by the Kyiv city council. In contrast, the City Communist Party committee in 1991 declared the initiative to be a political speculation and fomentation of anti-Communist nationalism. The same sources emphasized Ukrainian nationalism primarily as a threat, but also, half-heartedly, recognized it as one of the reasons behind the pluralism of the social and, eventually, political landscape. In its February 20, 1991 issue, Moscow-based weekly Literaturnaya Gazeta published a photo taken on the streets of Kyiv, showing people wearing the uniform of the Ukrainian Insurgent Army, the paramilitary branch of the far-right nationalist group Organization of Ukrainian Nationalists, which was responsible for the politically motivated killing of civilians during WWII. The photo accompanied a public discourse accusing Ukrainian nationalism with potentially threatening the integrity of the USSR as well as the nature of democracy. 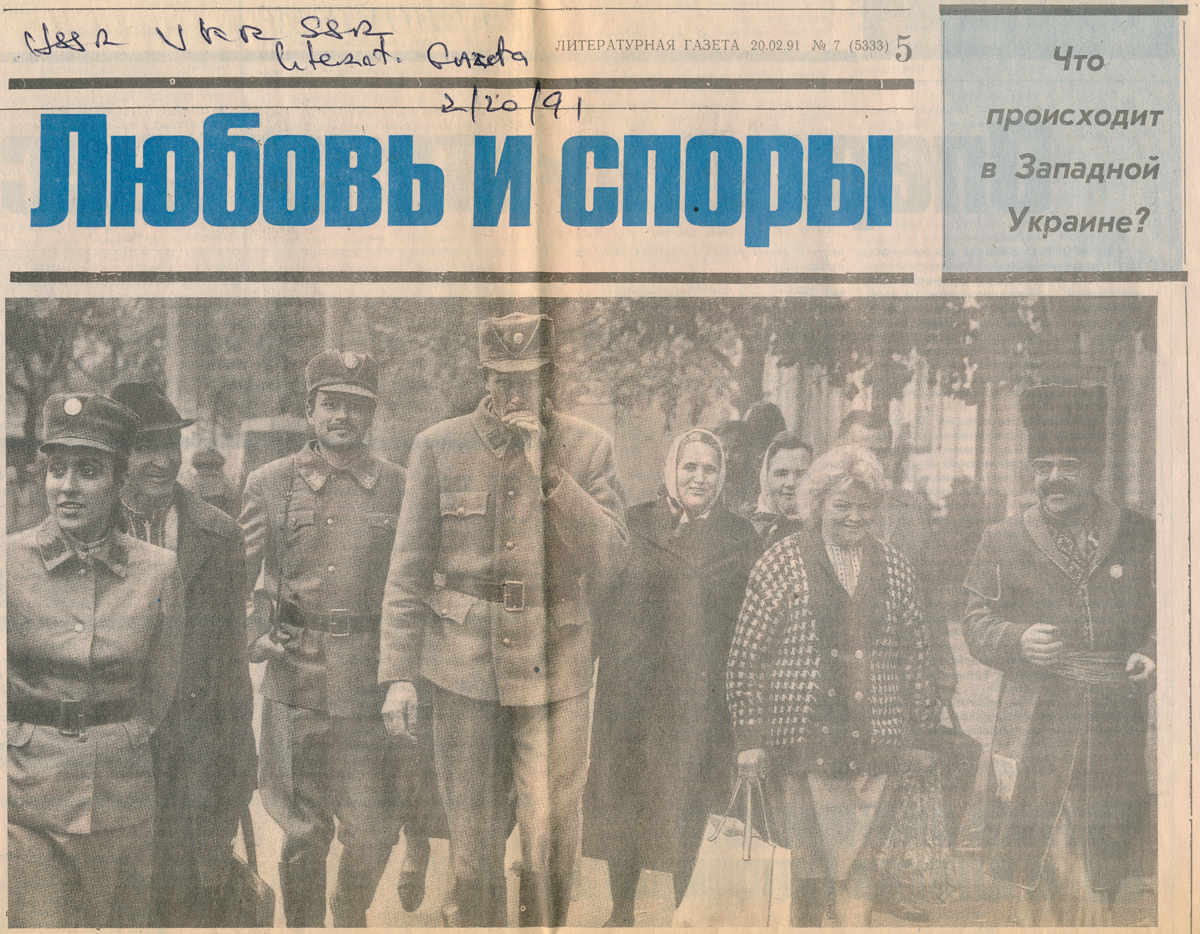 The integrity of the USSR, however, was compromised from within, not least for the reason of the coup attempt in Moscow in late August the same year. During the days directly following the coup’s failure, many republics proclaimed independence, and Ukraine was one of them. On August 24, 1991, the Ukrainian parliament, the Verkhovna Rada proclaimed that Ukraine would only follow the laws of the Ukrainian SSR, and not those of the USSR. Prominent oppoisition figure and Rukh deputy Levko Lukianenko authored the text of the Act of Independence. Soon, the country’s independence has been recognized internationally as well as domestically; on December 1, 1991, Ukraine held a national referendum asking citizens, “Do you support the Act of Declaration of Independence of Ukraine?” Voter turnout was 84.2%, the vast majority of the population stood by the country’s independence: 92.3% voted “yes.” A week later the Belovezh Accords declared the dissolution of the Soviet Union.

Next year, in August 1992, media discourse on the first anniversary of independent Ukraine reported elevated emotions among the country’s citizens, coupled with, in the context of the alleged “sudden transition,” structural problems in governance. One such trouble was the lack of bureaucrats and top-level skilled personnel, which posed the risk of facing an under-administered society in pivotal spheres, including economy. The shortage of skilled officials also created a challenge for a much-needed change of elites.

Symbolic politics, on the other hand, required strong intentions rather than infrastructure readiness. At the World Forum of Ukrainians that celebrated the anniversary of independence on August 24, 1992, it was stated that independent Ukraine was a direct heir of the Kievan Rus, the Principality of Galicia, the Zaporozihan Sich, and the Ukrainian People's Republic. This symbolic continuity targeted separating the country’s history from the one defined by Moscow, distancing from the past where Ukraine’s statehood and agency was subordinated to its neighbor. To further support commemorating the first anniversary of gaining independence, the government of the Ukrainian People's Republic, in exile in the West for more than 70 years, has publicly resigned, and transferred the regalia of statehood to the leadership of Ukraine, thereby relinquishing its powers. This ceremony, supported by the Ukrainian Autocephalous Orthodox Church, pursued a goal of witnessing the continuity of Ukrainian statehood. Leonid Kravchuk, President of Ukraine since December 1991, stated this act to emphasize the rebirth of Ukrainian statehood that had originated in the distant past. Thus, the first anniversary of independent Ukraine aimed to further distance the country from the Soviet past in terms of historical and symbolic imagination. 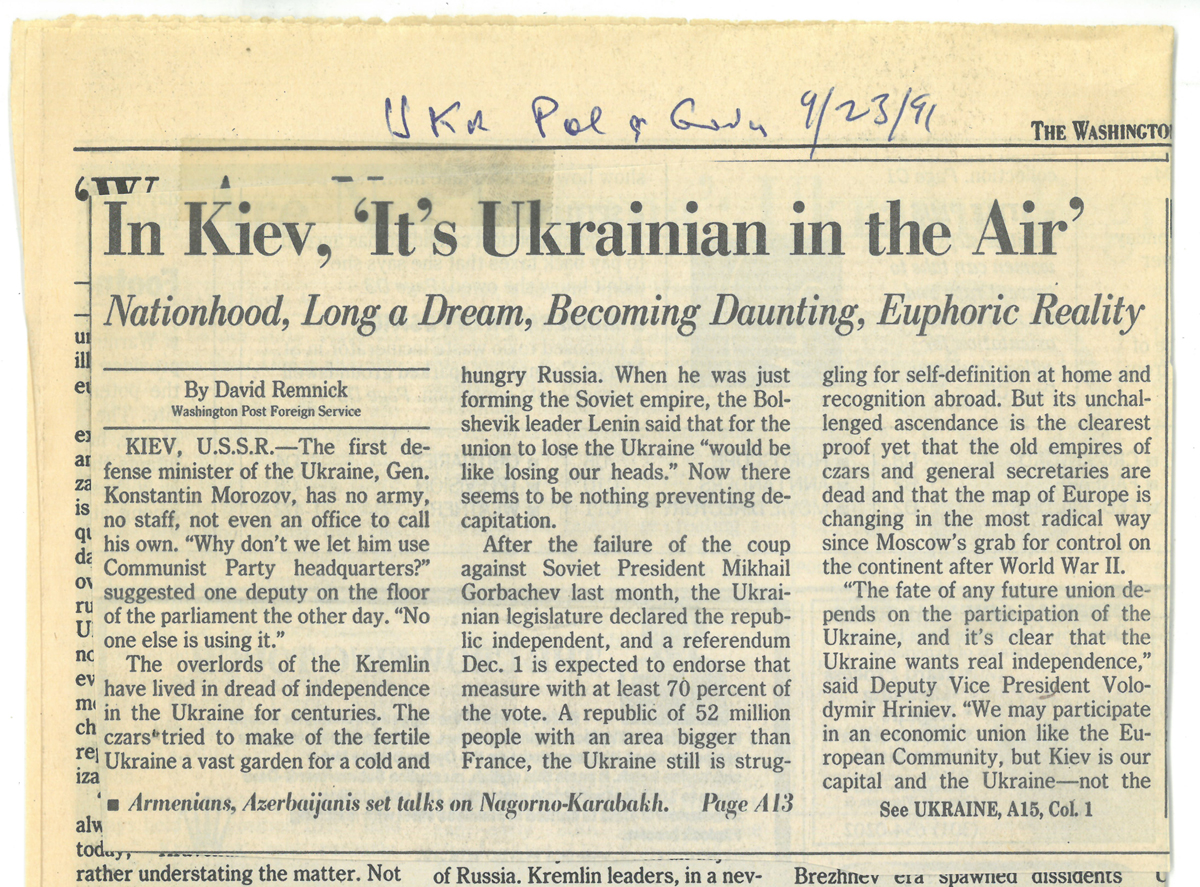 Parallel to this, another core state-building effort took place in the legal department. Records of Constitutional and Legal Policy Institute (COLPI), held at the Blinken OSA, recorded fifteen different drafts of new Constitution of Ukraine developed between 1990 and 1992. These have been produced by various parties for further consideration in the Parliament. The majority of the drafts have been rejected, and legal work on amending these versions and producing new ones continued for four more years, until 1996, when the first Constitution of Ukraine since independence was eventually adopted.

Unlike in 1990, when Ukraine was regarded only a potentially independent country, in light of its emergence on the international arena as a sovereign state, Western experts now sought for new interpretative framework to debate the country and its future. Articles from the extensive Western Press Archive and RFE/RL Research Reports at the Blinken OSA witness that authors at the time developed their arguments on the basis of a nation’s right to exist. Ukraine, as it was argued, had a significant national identity, language, territory, and sufficient economic resources with high industrial and agricultural potential. Besides that, an essential point to consider was a nation’s right to self-determination, as, despite differences in political aspirations, Ukrainians “appeared to support independence, either within or outside a revised Union.”

Many Western experts wholeheartedly welcomed Ukraine’s successful efforts to build a democratic society in an independent state, and cheered for the changed political mood in the country. However, many have been cautious about further consequences of the new reality. Some were calling the road to Ukraine’s independence uncertain, highlighting that declarations are more difficult to implement than to proclaim, and expressed persisting doubts about the feasibility and merits of an outright Ukrainian independence. Analysts were also concerned over the balance of power between democratic and conservative forces in Ukraine, and were questioning whether Ukraine could ultimately manage to build sustainable interstate relations with neighboring Russia. 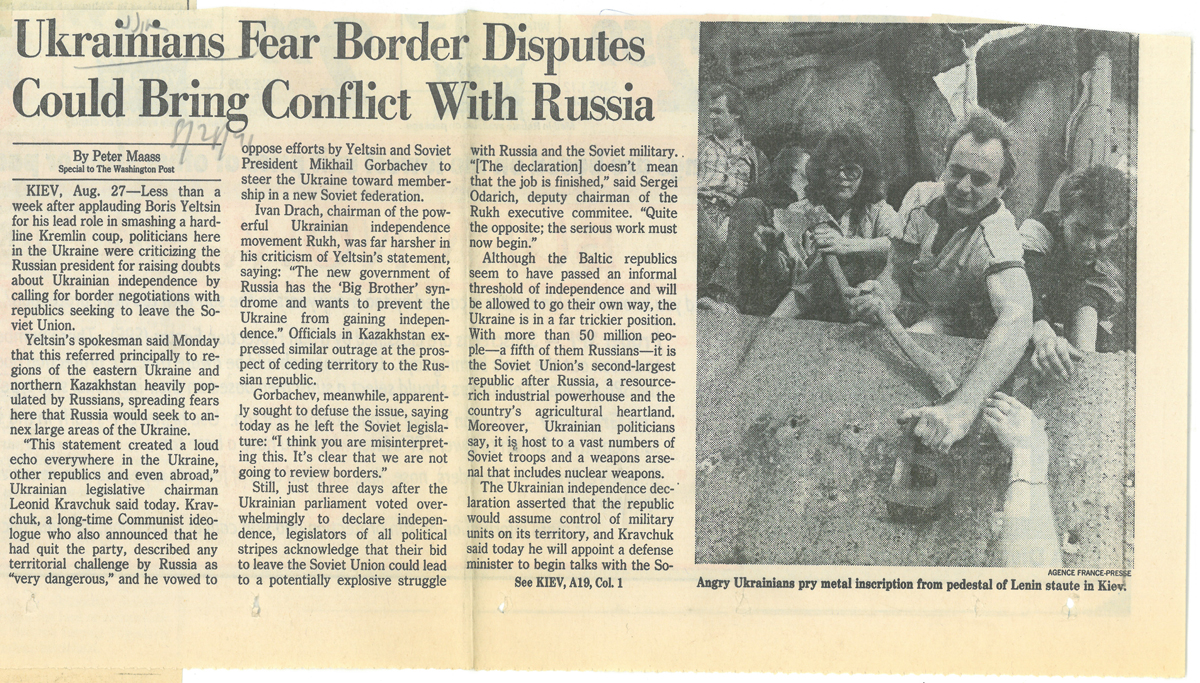 The new order required these relations to be built on the basis of a mutual respect for sovereignty and the inviolability of borders, which were on the agendas of analytical briefs throughout the transition period. The need to restructure economy, to resolve the matter of nuclear weaponry liquidation, potential conflicts over use of languages, and the Crimean dilemma, were considered to be grounds of potential escalation. Most importantly, experts were concerned with the very capability of the Russian government to see in Ukraine an equal partner, and accept its independence in decision-making and state-building on national and international levels. Back in 1991, responding to a publication in Russian media about possible exchange of nuclear strikes between Ukraine and Russia, Leonid Kravchuk (then chairman of the Verkhovna Rada of the Ukrainian USSR) indignantly stated that the country always had and would have only the kindest relationship with Russia.

Despite the concerns, uplifting expectations about the developments in Ukraine prevailed among international analysts. Another sentiment, weakly concealed in the briefs, was that of surprise. Almost a year after Ukraine gained independence, an article in the Philadelphia Inquirer in 1992 compared the eruption of violence over the dissolution of Yugoslavia with encouraging developments between Ukraine and Russia, despite ethnic and territorial disputes. 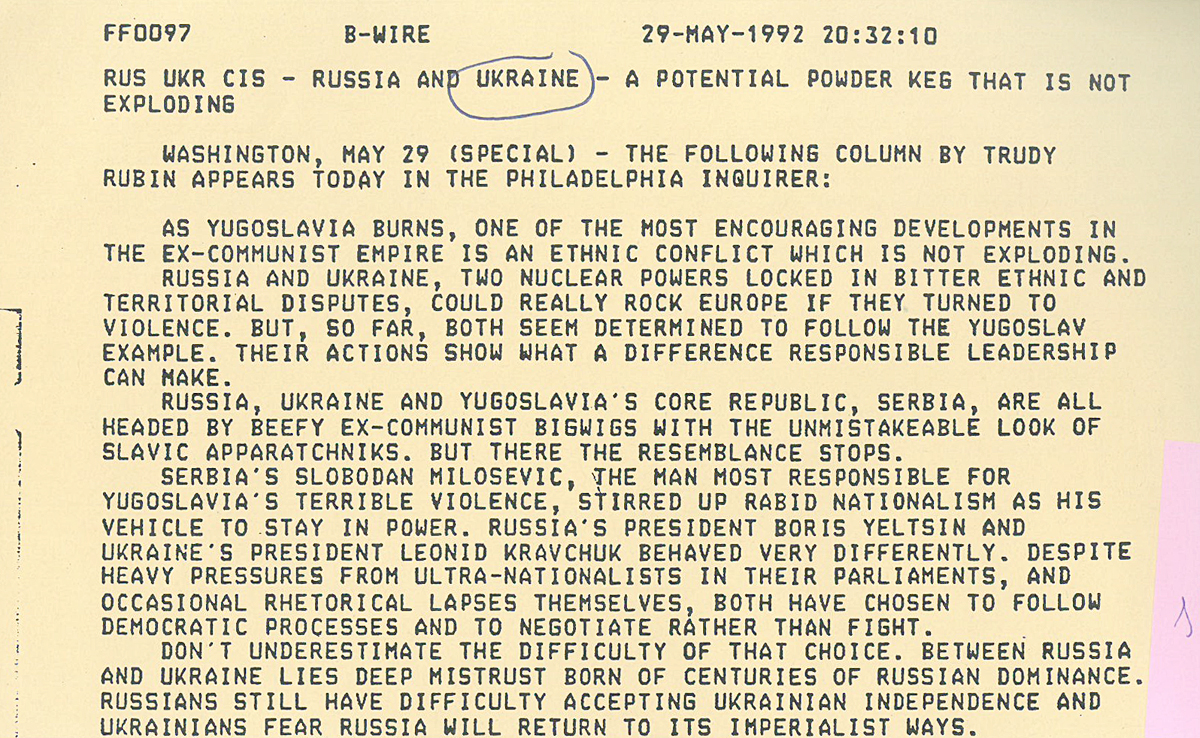 Elected politicians in both countries were credited for not slipping into violence and deciding to negotiate instead. The same was true for common citizens, who reportedly didn't “nurture the bitter hatreds that separate Serbs and Croats”. Another crucial requirement for sustaining the new order (“to make sure they stay on their responsible course”) was considered to be Western support of the matter. Success in nuclear disarmament was regarded a major step in this direction. Yet, experts called for more assurances that Ukrainian security mattered, and for economic help, as “hard times fuel . . .  ultra-nationalist dreams.” Thirty years later, these concerns proved to be hardly groundless.