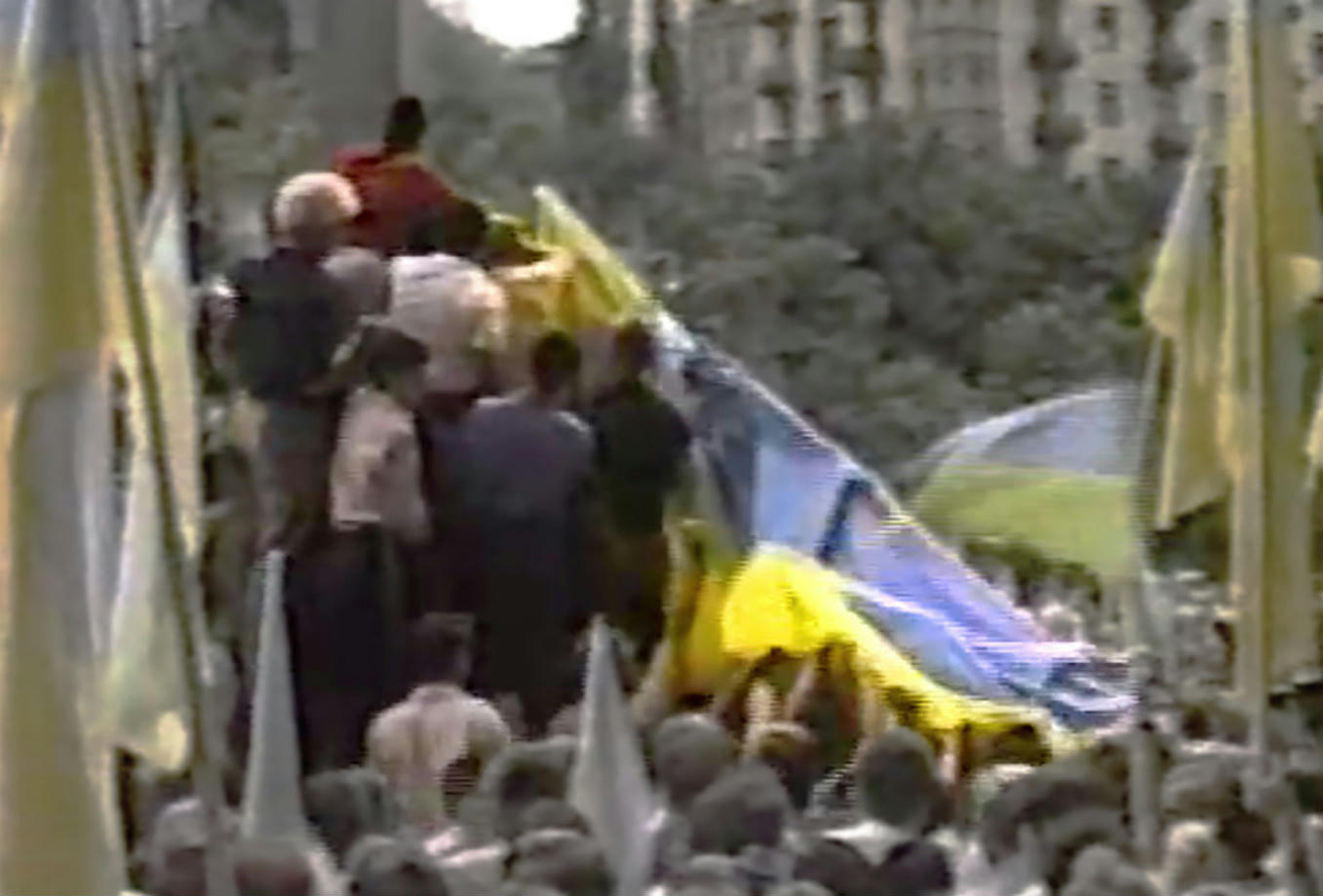 In two chapters, we revisit the milestones of the Ukrainian democratic transition following 1989. The first part explores the social movements and events that defined the country’s path toward state sovereignty, and later independence. We look at these decisive years through archival material held at Blinken OSA. In this counter-archive, the vast holdings on the Cold War anticipate a large collection on democratic transition in Central and Eastern Europe.

Forrás. [Source., or Boiling point] is a blog series by the Blinken OSA staff at the Hungarian news website 444.hu. This post originally appeared on osaarchivum.444.hu.

Right before launching an unprovoked war on Ukraine on February 24, 2022, Russian President Vladimir Putin addressed his nation and international audience. His speech was heavily based on twisted historical arguments intended to disregard the very foundation of Ukraine’s sovereignty and independence. By doing so, it neglected an internationally recognized world order that came into effect after the dissolution of the USSR. The years following 1989 were considered an all-encompassing transition to democracy in the entire region; thirty years later, this seems to be true only for selected nations, Ukraine among them. Critically revisiting what analysts at the time often described as a “sudden transition“ is crucial in the context of today’s war of aggression, as many knots of discord that aggravated recently were present and detected in the public debates back then.

In 1989, one of the major grassroots actors on the emerging political scene of Ukraine was the civil-political movement People’s Movement of Ukraine for Reconstruction (for perestroika), or Rukh. The foundation of the organization was made possible by Mikhail Gorbachev’s policies of glasnost’ and perestroika. Overall, Rukh played an important role in voicing discontent, allowing prominent dissidents, intellectuals, and former political prisoners to enter the political scene, such as Viacheslav Chornovil and Levko Lukianenko. As a political organization, Rukh successfully organized hundreds of rallies and demonstrations that demanded Ukraine’s secession from the USSR.

An excerpt from the archival series of recordings of Soviet television programs captures the moment right after the recently-elected Ukrainian parliament, the Verkhovna Rada (Supreme Council) of Ukrainian SSR adopted the Declaration of State Sovereignty on July 16, 1990. On the following excerpt, Levko Lukianenko, one of the authors of the declaration, addressed the cheering crowd in Kyiv:

Levko Lukianenko addressing the crowd, following the adoption of
the Declaration on the State Sovereignty of Ukraine on July 16, 1990. Excerpt from the full recording.
(HU OSA 300-81-9, Records of RFE/RL Research Institute, Video Recordings of Soviet and Russian Television Programs)

The preceding campaign for signing the declaration had mobilized mass support and rallies across the country, also visible in the footage. By proclaiming state sovereignty, Ukraine followed the three Baltic countries (also still republics of the USSR at the time), and took a step toward independence.

The declaration of sovereignty proclaimed the Ukrainian SSR to be a sovereign national state and emphasized the Ukrainian nation’s right to self-determination, as well as the Ukrainian SSR’s supremacy on its entire territory. It also established the rule of and by people, and independent decision-making in all issues regarding Ukrainian state affairs, environmental safety, cultural development, internal and external security, and international relations. The declaration decreed that Ukrainian SSR laws took precedence over the laws of the USSR, and proclaimed that the republic was intent to become in the future a neutral state, with no participation in military blocs. Of core importance for the context of nuclear disarmament was that the document stated that Ukraine would not accept, produce, nor procure nuclear weapons.

In the West, this triggered a flood of press reactions that sought to find Ukraine’s place on the new geopolitical map of the USSR and of the world. Western journalists defined Ukraine as a semi-separate entity, which unveiled the fact that hitherto Ukraine had not been present on the Western mental map on its own. Along with informing readers on the political developments in the USSR, the news repeatedly stated the size, population, and production capacity of Ukraine in agriculture and industry. Emphasizing the productive power of Ukraine (then still Ukrainian SSR), Western media was wondering about the scale of damage that would potentially hit the entire regional economy, had Ukraine decided to leave the USSR. 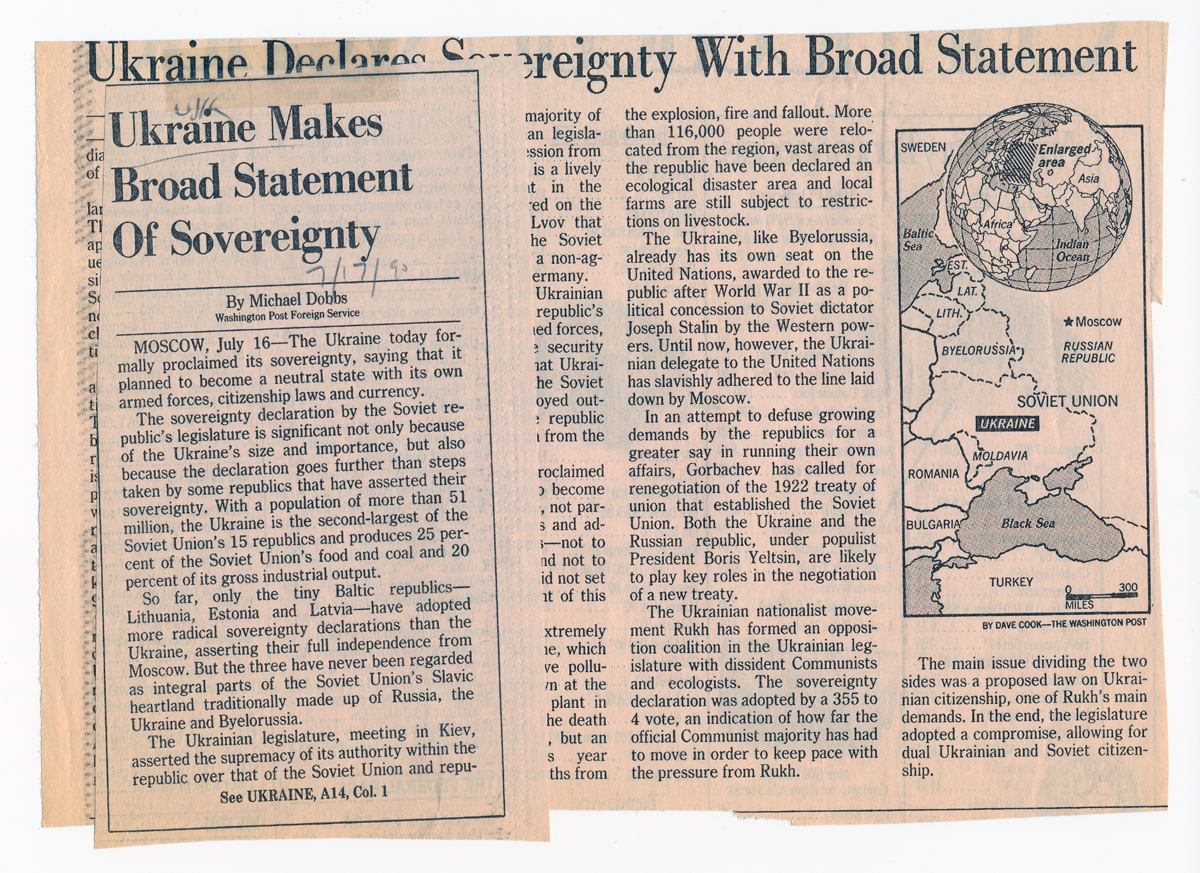 However, declaring sovereignty was not the final step in gaining independence. Another pivotal episode that contributed to the political face of Ukraine was a grassroot mobilization in early October 1990, a student protest campaign and hunger strike known as the Revolution on Granite. It was the first in a series of mass-scale protests on the central square of Kyiv, further shaping Ukraine’s modern political history. In one of the video recordings of Soviet television programs held at the Blinken OSA, one may witness the course of the protests; occupying the large square, setting up shelter-halves, and going on a hunger strike. Deeply unsatisfied with the results of the parliamentary election earlier the same year, when the Communist Party of Ukraine had won the majority of seats, the students voiced several demands. The protesters, originally a few dozen students from Kyiv and various cities in Western Ukraine, soon gained mass-scale support from workers to dissidents. They eventually managed to force the Prime Minister to resign. Major long-term effects of this protest include that in 1991 officials did not sign Moscow’s New Union Treaty intended to transform the USSR into the Union of Soviet Sovereign Republics.

General Secretary Mikhail Gorbachev wanted to reinforce the planned New Union Treaty in a referendum across the entire USSR, held on March 17, 1991, posing the question, “Do you consider necessary the preservation of the Union of Soviet Socialist Republics as a renewed federation of equal sovereign republics in which the rights and freedom of an individual of any ethnicity will be fully guaranteed?“ In Ukraine, however, the parliament organized a national survey on the day of the referendum as well, asking citizens of the Ukrainian SSR if they agreed “that Ukraine should be part of a Union of Soviet Sovereign States on the basis on the Declaration of State Sovereignty of Ukraine?“ Turnout was 83.5%; to the question orchestrated in Moscow, 70,2% responded in the affirmative (and 77,8% in the entire Soviet Union), allowing Gorbachev to conclude that two-thirds of the Ukrainians wished to remain part of the union. Yet, 80,2% said yes to the question addressed in the national survey, which, according to Western reports at the time, “very clearly qualified precisely what kind of an arrangement the people of Ukraine preferred.“ Consequently, the Supreme Council of the Ukrainian SSR postponed the decision on the New Union Treaty. 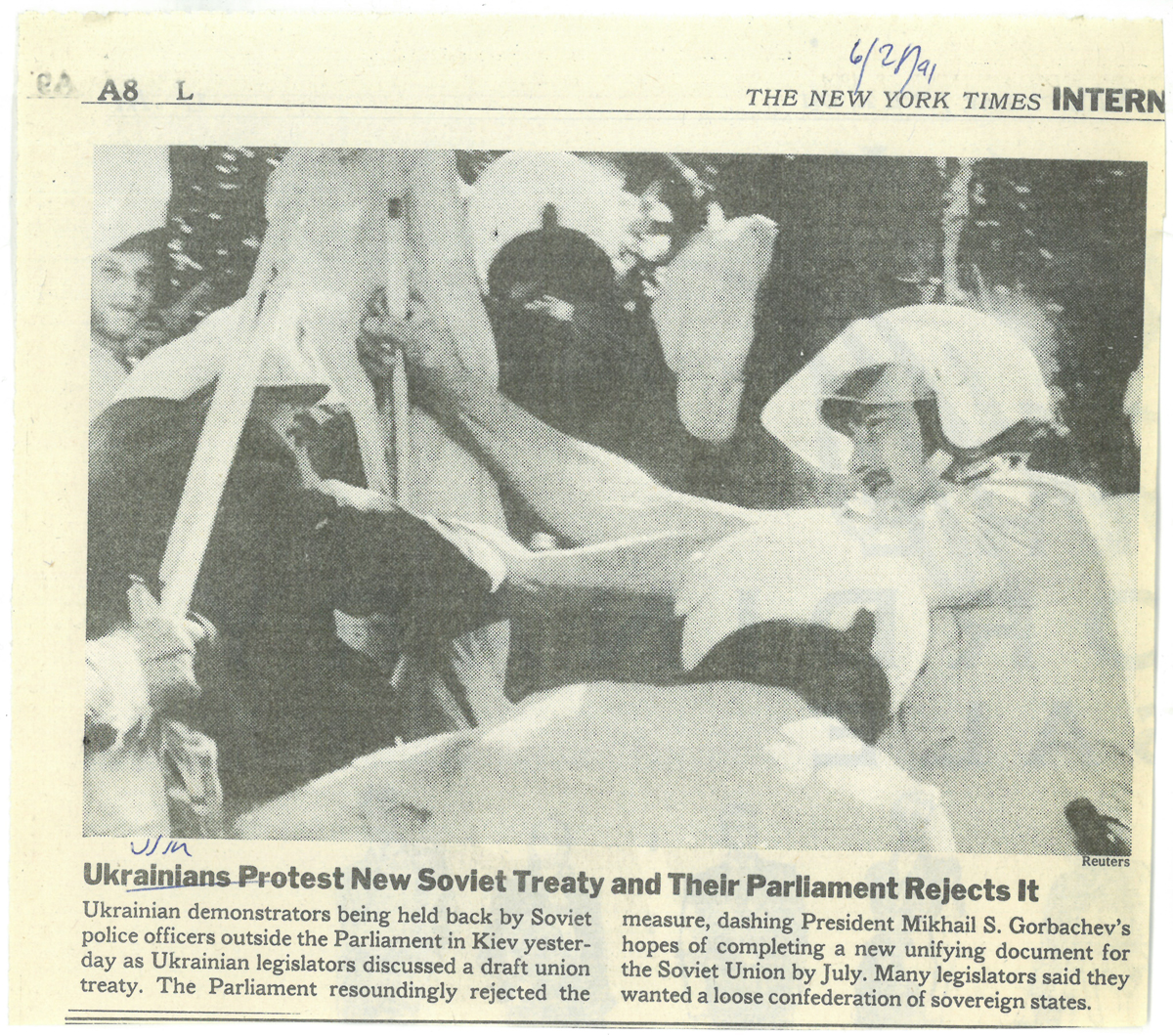 With Ukraine’s transition from Socialism to democracy, the documents vividly capture an authentic pursuit toward regime change, and a diversity of actors and opinions. Besides the macro-political reality of the collapse of the USSR, the process of democratization, gaining sovereignty, and later independence, was evidently deeply rooted in successful mobilization.

In the next part, we will recall how Ukraine gained its independence in 1991, and how it celebrated its first anniversary in 1992.