I never met Tibor Philipp. I never met him personally, but I’ve met his name many times, as I was dealing with the history of the Inconnu Group and György Krassó; I recognized him on photos and movies, and I read state security reports on him. The past few days, I’ve revisited the oral history interview Ágnes Kőműves had conducted with him ten years ago, in 2009–2010 for the Oral History Archive. The following excerpts from this interview may reveal a few of the somewhat forgotten stories and dilemmas of the 1980s opposition. 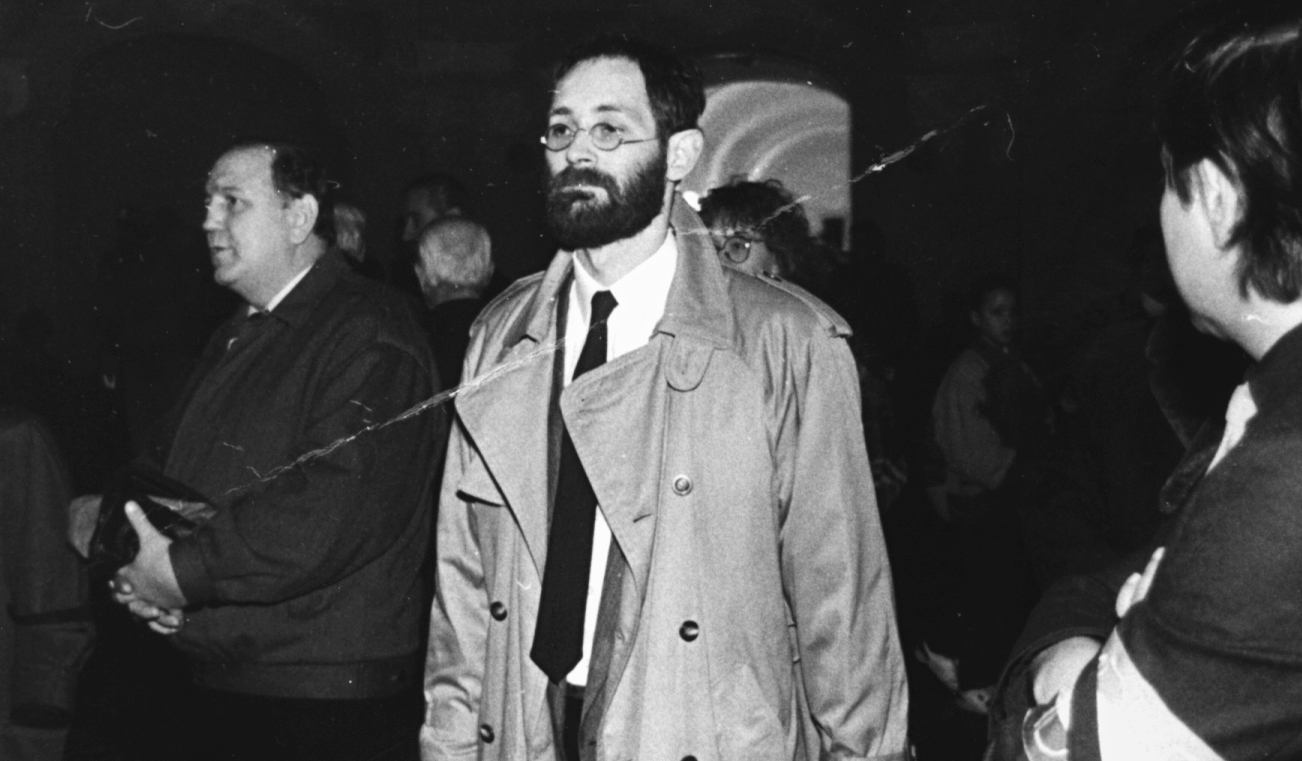 Tibor Philipp joined the Inconnu Group in the early 1980s, at the time the group moved its activity from Szolnok (where state persecutions inhibited their practice as well as their livelihood) to Budapest. Philipp became a member as a relative of György Krassó, who mentored and shaped the group in several aspects. In the interview, Philipp described the group in the following way:

There were hardly any artworks that we didn’t mess up somehow. Either a letter was missing, or it was upside-down—everything was full of mistakes. Which we found amusing. Well, that’s what Inconnu was like. Tamás [Molnár] was the one trying to arrange things to fit artistic points of view; while I was trying to squeeze in more politics.”

Apparent already in the few sentences above, Philipp’s empathetic yet detached approach enabled him to discuss his political and artistic dissent during the 1980s in a self-reflective, perhaps even slightly cynical manner. Besides shaping events, he also actively documented them throughout the decade. He took photos (available at the Fortepan website), he made and distributed samizdat publications, and he realized the video samizdat series In Backlight with the Inconnu Group in 1989 (available in audio format at the OSA’s Will There Be a 1989? website). His activity as an “opposition press worker” may explain the mistrust he felt toward the media. Having experience from the production side, he saw what could and what could not become news; he understood which opposition figures were interesting to Western media, and which were not; and he was aware that it was the media that decided the fate of a news piece, not the event it was about. For example, recalling the Inconnu’s 1988 hunger strike, he said:

“In 1988, on the occasion of Grósz’s [Károly Grósz, General Secretary of the Hungarian Socialist Workers' Party] visit to the USA, we agreed to realize a fast in my apartment, which was a huge success, compared to its actual insignificance.” 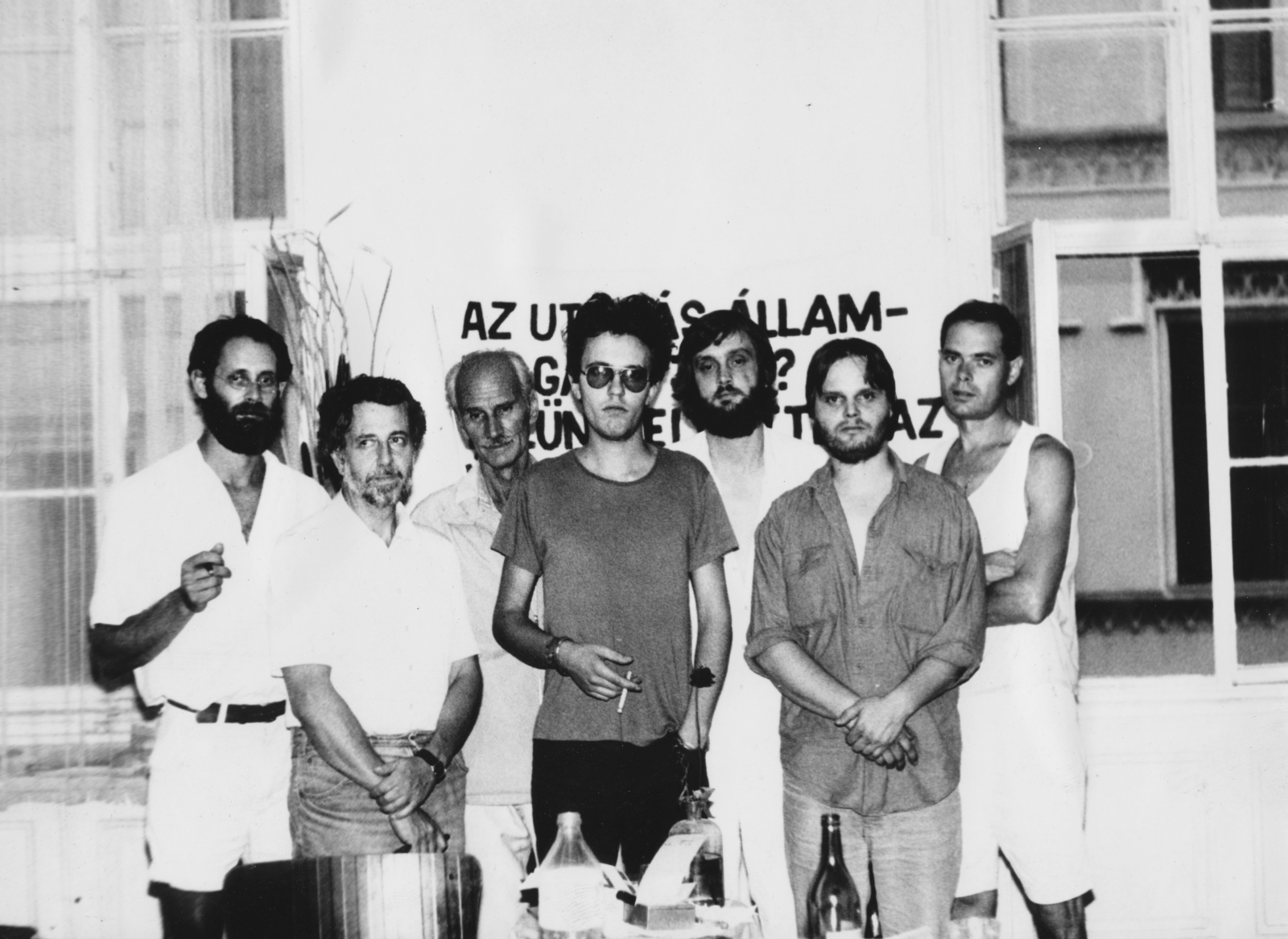 In his oral history interview, Philipp extended the doubt he had about the reach of the group’s activity to the efficiency of the samizdat culture in general.

“[Samizdat publications] only reached those who made efforts to be reached and thus belonged to a certain circle consisting of people already in contact with each other. Distribution was not done publicly. Practically, the story was a case of the snake biting its own tail. . . . The whole thing was capable only of registering its own history and legitimizing its own existence. The aim is to produce something that is going to be read by ourselves or by our men, an activity that, at the same time, will also cover our expenses or more, since the income and the donations will help make ends meet. If I want to be mean, I can look at it like that as well. . . . My impression is that the samizdat and the activity of the opposition is mostly approached as something heroic, without its complexities—I’m trying to act otherwise.”

These, of course, were thoughts Philipp expressed in the 2010s, and not in the 1980s; yet, in an exceptionally intriguing part of the interview, he acknowledged that opinions and lives that had broken away from political resistance had been, during this opposition period, beyond his understanding (or tolerance). Thus, in retrospect, he did realize the extent to which pursuing an opposition lifestyle and founding a family were incompatible.

“That was all that was possible under the circumstances. Maybe, we could have been more daring, and then we could have achieved more; but we were too careful, or just incompetent. Actually both, I think. Furthermore, this was not simply the question of having the will, but also of having the opportunity. . . . Back then, I saw it differently. If someone did not act the way I did, that was incomprehensible to me.” 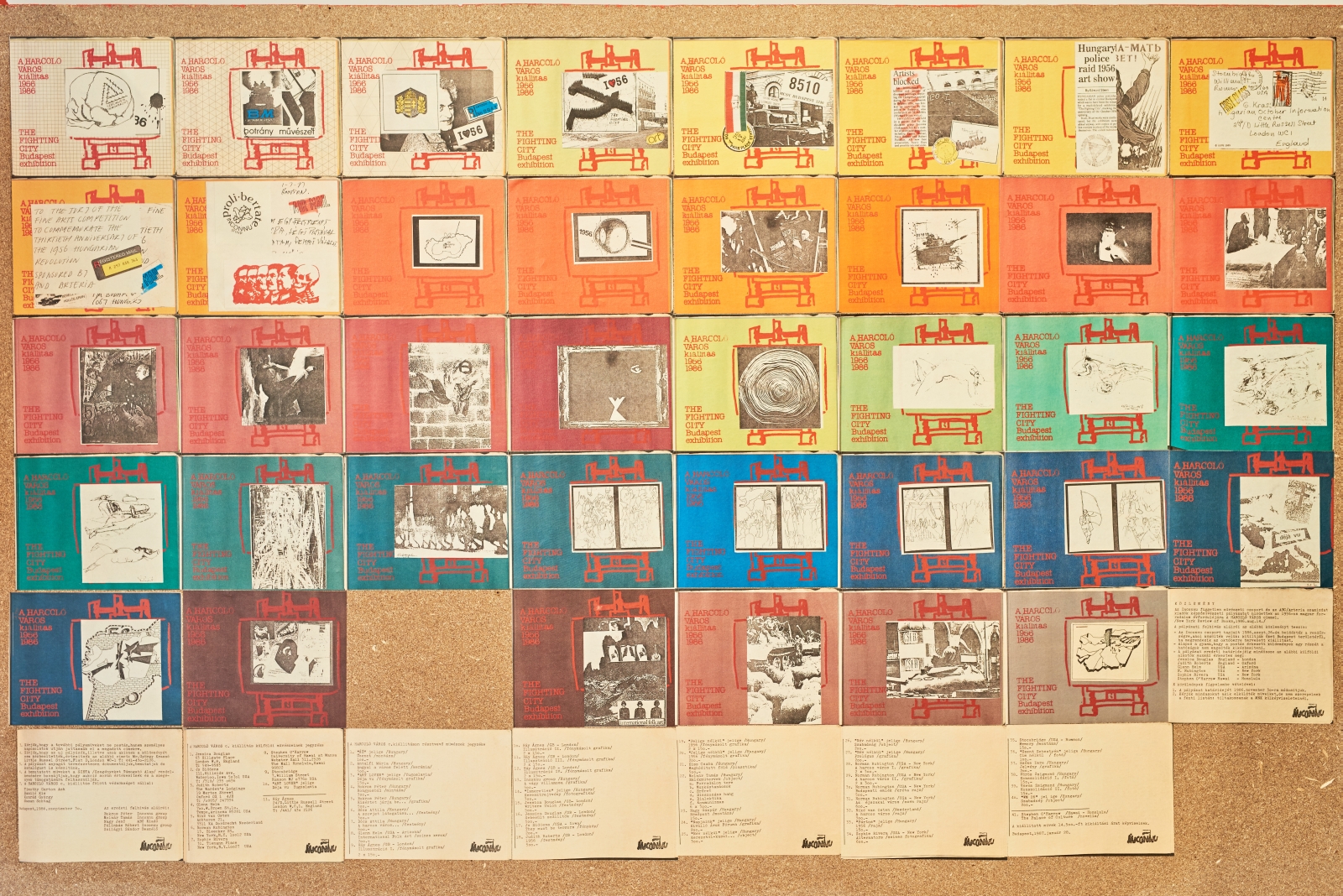 In another noteworthy moment of the interview, Philipp described the dividedness of the 1980s opposition. From the dominant figures of the opposition, it was György Krassó to whom he and the Inconnu were close to; although the group indeed was an organic part of the political opposition, they belonged to its more secondary segment. In their case, this subordination partly resulted from the fact that they originated from the countryside and had no intellectual background; in the interview, Philipp, the group’s only member from the capital, revealed how social status defined the political role of opposition members. His train of thought almost evokes Antonio Gramsci’s or Iván Szelényi’s ideas on the sociology of intellectuals.

“I’m a common commie offspring; for sure, the diverse circle around the Beszélő must have included such people too, but the majority was not like that, mostly they were intellectuals and, for some reason, late members of the Party leadership, or people associated with its reform wing, to be precise. That was a huge difference, because while one of these gangs was thrown out and despised, the other could remain, since the intelligentsia cannot be thrown out just like that. This was a different segment, the circle of writers and artists, who, naturally . . . preferred affiliating with Jancsi [János] Kis, rather than with worker women from a weaving factory. And not because the latter was below them, but simply because that was the social circle they belonged to.”

“What caused the relative isolation of the Inconnu? Well, I think we were so disobedient, that we refused orders or commands even from the disobedient. . . . Basically, we didn’t think that we were supposed to conform to anything, be it a person, a group, or an idea.” 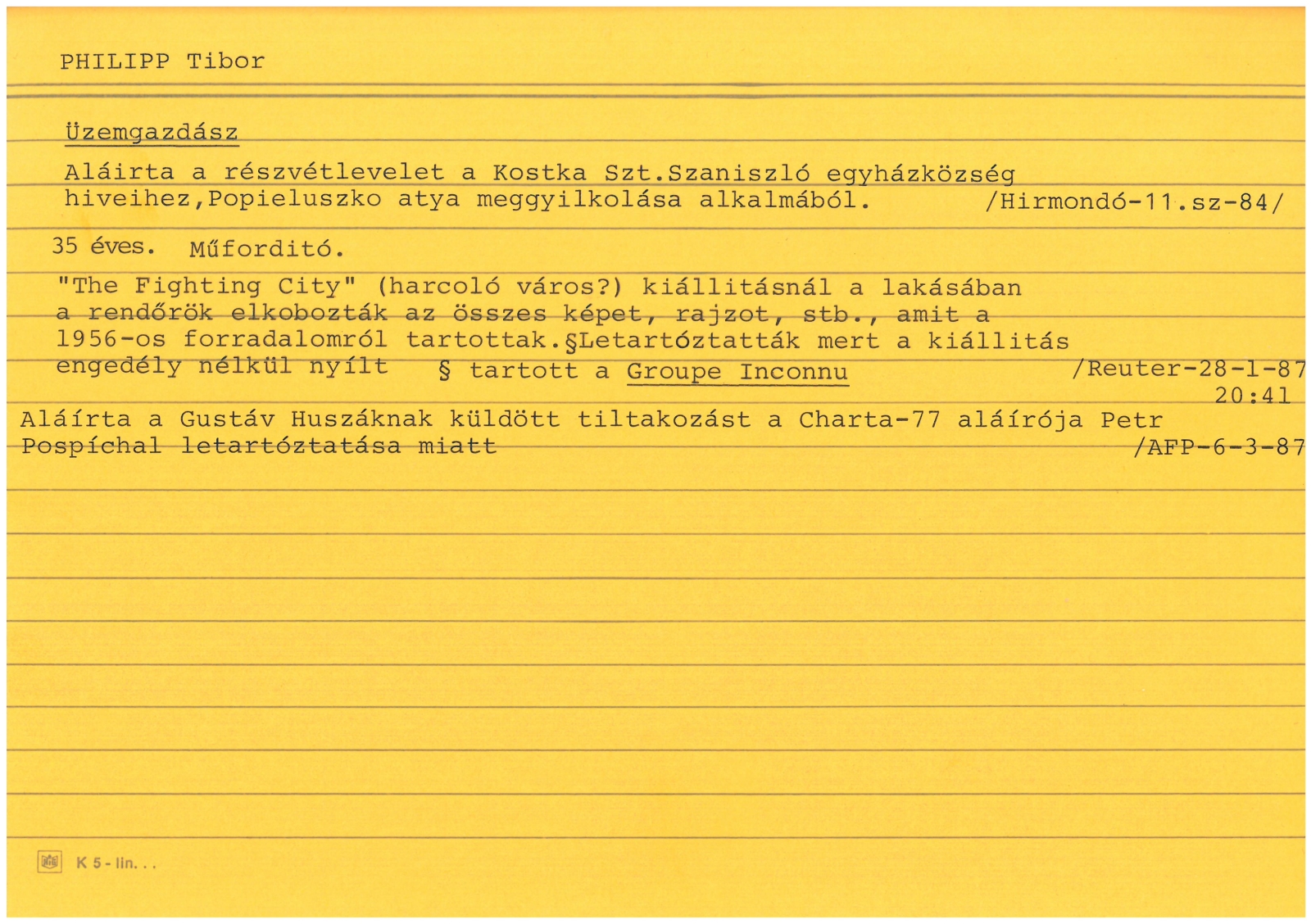 Tibor Philipp was not merely a significant figure of the political opposition of 1980s Hungary (on his own account as much as a member of the Inconnu Group); he also established an illuminating position when he revisited the period. He did not limit himself to nostalgic narratives, turning the struggles and beauties of the opposition into hagiography; nor did he turn his back on his past, demonizing his activity as a member of the opposition. He presented a rare, critical attitude toward his own achievements, demonstrating their significance (or insignificance) as embedded in socio-historical structures. Approaching the events closely, he revealed and related to their inner rationality, yet, at the same time, he kept his distance and remained reflective—a manner much more characteristic of anthropology, than of autobiography.

Tibor Philipp donated a significant collection to the Blinken OSA. Related to the activities of the Inconnu Group and the 1980s democratic opposition, the materials include samizdat publications and periodicals, ephemera and graphic works, pins and stickers; the collection even comprises documents on political happenings realized in private apartments or in public spaces, such as invitations, programs, speeches. The detailed description of the collection is available in the catalog. 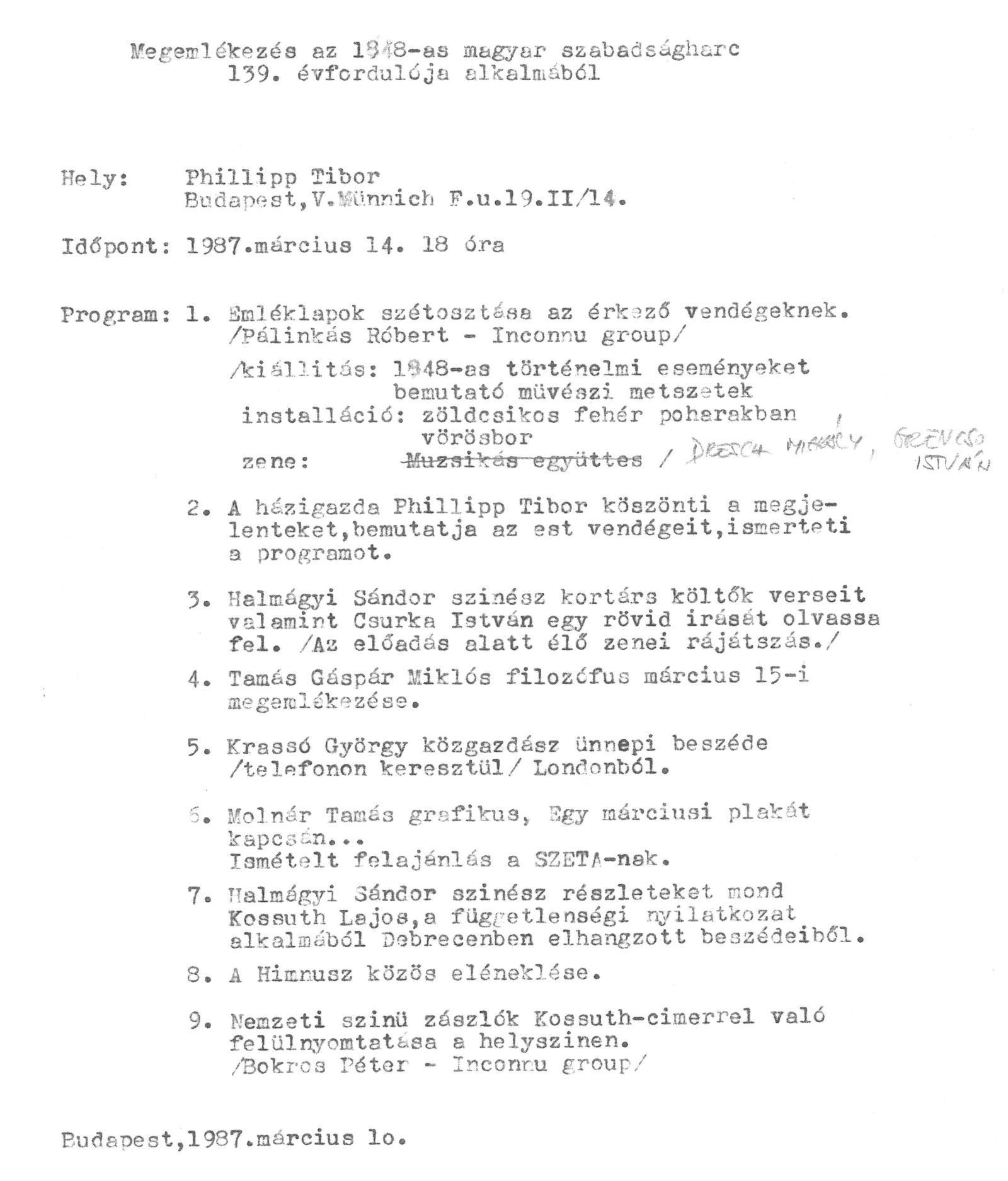 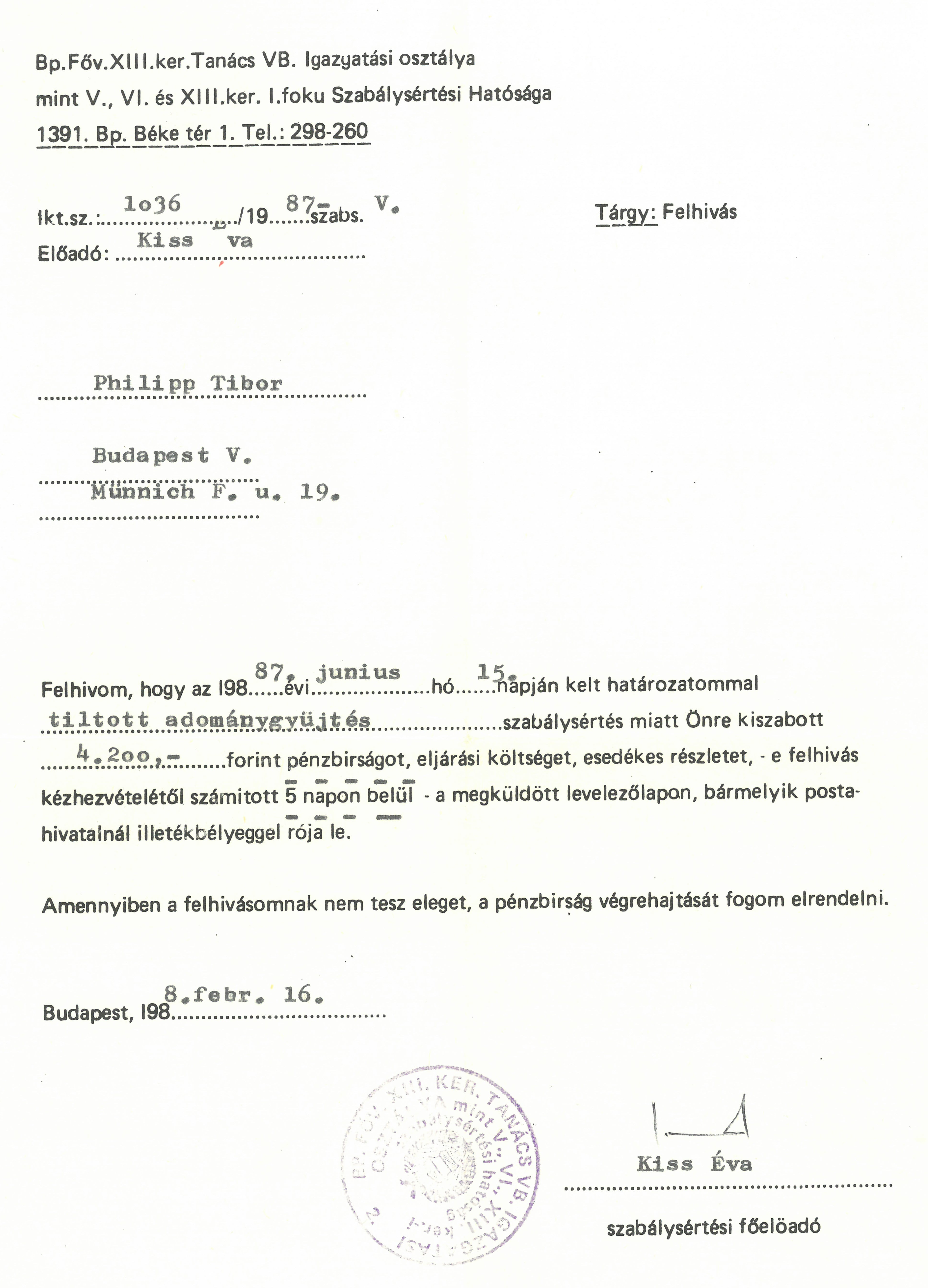 Program of a March 15 celebration organized in Tibor Philipp's apartment in 1987, and a penalty notice for forbidden fundraising.
(Blinken OSA, Tibor Philipp Collection)