Is There an Internet Proletariat?

Is it true that in the digital age there are no workers and no working class, that everyone is a white-collar worker or self-employed? Or does exploitation prevail in the era of Platform Capitalism, with social inequalities still on the rise? What is the role of labor research today, and what are its tools? These were the main questions of the panel discussion “Digital Workers, Internet Proletariat,” a session of the conference Labor Research from Planned Economy to Savage Capitalism, organized in December 2020 by the Research Documentation Centre / Voices of the 20th Century Archive and Research Group together with the Vera and Donald Blinken Open Society Archives. Read our summary of the discussion featuring sociologist Éva Bognár (CEU Democracy Institute), information society researcher Árpád Rab (Corvinus University of Budapest, University of Public Service), and information society researcher László Z. Karvalics, moderated by Iván Székely of Blinken OSA!

The following article originally appeared in Hungarian on Forrás. [Source., or Boiling point], a blog series by the Blinken OSA staff at the Hungarian news website 444.hu. Recordings of the conference are available (in Hungarian) on Blinken OSA’s YouTube Channel!

Essential Dilemmas of Labor Research in the 21st Century

Nowadays, we often see purely computer- or web-based activities to be performed by social groups with low social prestige and low living standards, producing low surplus value. One may think about semiskilled crypto miners, or people making their living by “gold farming,” producing credits for weaker (but richer) players in MMORPGs, spending sixteen hours per day in stuffed, badly ventilated server rooms. We can consider them an Internet proletariat.

Questions about digital workers and the Internet proletariat cannot be approached within the traditional theoretical framework of class and value production, as in the developed world it has become difficult to find workers working physically in masses in one location, sharing the same class consciousness and culture (like those flowing out a factory gate in the well-known silent film by the Lumière brothers, or whom Chaplin mimicked with stark social criticism in his Modern Times). Yet, even if assisted by robots and with machine and IT support, our cars or computers remain to be assembled (and disassembled) by trained workers and moved by storage employees, who have to make ends meet.

The term “worker” itself may cover numerous things; highly trained professionals and unskilled laborers, semiautomated tractor drivers with IT skills and agricultural seasonal workers, employees owning shares in their companies and temporary agency workers. Basically, anyone laboring whether because of financial reasons, commitment, or personal ambitions, may in a broader sense be considered a worker, even if they possess their own capital and tools. Some neo-Marxist thinkers see Facebook users as exploited workers who by writing and sharing posts and clicking ads produce value; this value then expands the profits of information monopolies, and is hardly returned to the users of social networks.

Who Are the “Workers” Today? Digitization and Capitalism

According to Z. Karvalics, work-related activities in the current digital ecosystem are extremely diverse, from the digital gamification solutions loosening the monotonous actions of an assembly line worker, to operating a precision combine harvester that controls an army of sensors. Performers of these actions cannot be categorized under traditional classes or social groups, and common features are rare among specialized working conditions. Éva Bognár argued, however, that the fundamental logic of Capitalism and market economy is so powerful, it cannot be overridden by digitization; which justifies the validity of the old terminology, as well as the relevance of labor research. The most pressing questions are alienation, practicing control, the commodification of labor, and whether we can still talk about a social class in which solidarity and common consciousness still exist.

Árpád Rab thinks that the working class still exists, and that many past processes are still ongoing. Workers are being eroded from two directions; from below, because of automation, which became apparent with the reaction of the machine-destroyer Luddites, and from above, because everyone is expected to do gradually higher qualified, more creative and complex work. According to Rab, the idea of the worker should be extended to the realm of intellectual labor, which, just like physical labor, can be equally exploitative, used as a weapon, and generate new workers’ skills, such as the way an intellectual worker is supposed to cope with different software, tasks, legal categories. Nevertheless, that still does not make the image too complex to talk about labor and workers in general. The turning point is whether what comes out as the result of labor at the end of the value chain, is it physical commodities (e.g., a car at the end of the fully automated assembly line) or digital commodities (e.g., a new lightsaber from a computer game developer); these are the two main categories of labor and laborers.

If we presume that laborers contribute to society not as atomized, solitary individuals (despite being active in numerous particular working conditions), then they must have typical groups, and group members have typical communication practices, cooperation strategies, competitions. The basic question of contemporary social scientists is how to identify these groups, how to describe their characteristics, how to study them? How do their members think, on what platforms and how do they stay in contact?

How to Study Them? Three Approaches 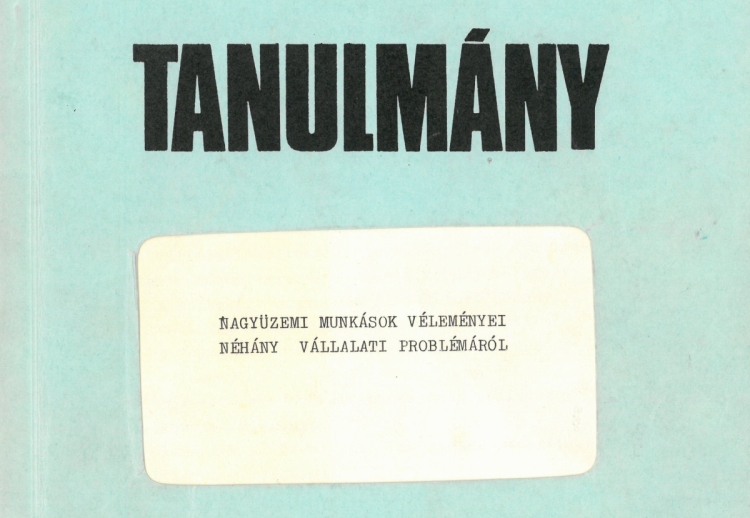 It is unsure, whether to what extent do traditional tools of examination, such as interviews, questionnaires, ethnographical studies, remain sufficient in answering questions like the ones above. The panel discussion delineated three approaches. According to the first, these technics are still useable, and may produce relevant results, of which the workshop conference presented several examples. However, reaching out to responders has become difficult; unlike before, when it was enough to visit the factory union, now this requires the survey of different forums and Facebook Groups. Yet, it is possible to open knowledge portals on, for instance, the income of IT personnel, and researchers can quickly have their target population.

Instead of this more traditional framework, the second approach considers data-based methods more suitable to examine the workers and working conditions of the digital era. Tons of data are collected on digitally assisted and purely digital labor. Such data can be used to study laborers’ group behavior, while logging individual activities expose, for example, how work intensity changes. Direct observation may also reveal crucial information. However, it is precisely researchers, working by the strict requirements of research ethics, who have the most limited access to these data—unlike business or political actors.

The third approach suggests the formulation of relevant research questions in the first place, and addressing methodology only later. Z. Karvalics presented a favorite example of his; surveys on the online habits of female Tunisian weavers and similar topics may be excellent as far as methodology is concerned, but from a research point of view, they are utterly irrelevant. According to Z. Karvalics, work, its conditions and its products, cannot be examined by themselves, but together with consumption, the utilization of the produced commodities.

Optimistic forecasts presume that as a beneficial effect of technology, we will be liberated from monotonous, repetitive work, the labor time of future workers may even decrease. Yet, by looking at our immediate surroundings, we see that people tend to use their leftover free time to accept one or more part-time jobs; and not simply because of financial pressure, but for cultural reasons as well. We often see the “workers” sitting in front of computers doing the same, exercising self-exploitation. According to the research results Tímea Vencel’s lecture included at the workshop conference, in the past, the highest social status used to be associated with not having to work much, with being able to afford vacationing and valuable free time. Going deeper, in countries with the highest living conditions, people with the highest education had the highest working hours, while in countries with the lowest living conditions, it was the people with the lowest education who had the highest working hours. Today, it is the opposite: higher working hours mean higher social status. 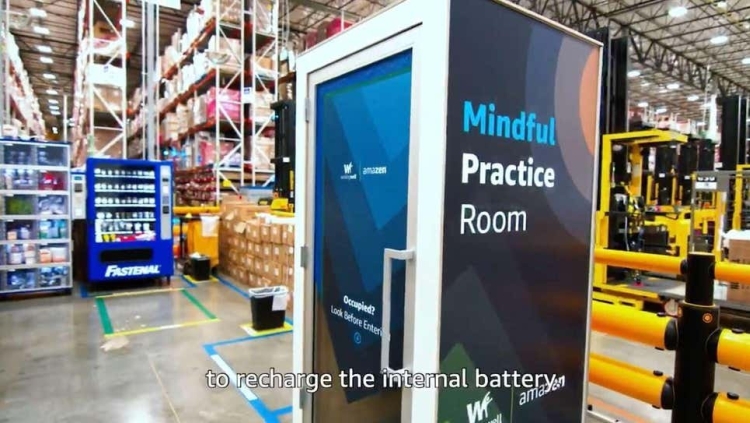 Processes opposing the humanization and security of work must not be ignored. In exchange for an illusion of freedom, remote workers, freelancers, or digital nomads experience that company frameworks and constraints did provide a notion of protection, there may have been advocacy organizations and legal protection. Outside the employee zone, however, the need to having to comply with buyers, self-exploitation, the race for appraisal on online platforms, are gaining dominance, possibly resulting in more robust control and coercion. Although the status of digital nomads is today the envy of many, and they are not considered a precarious social group with constant insecurity, they also are gradually more affected by underlying constraints.

Árpád Rab pointed out that the awareness of people and especially of laborers is lagging behind the technology available to them, as well as behind realizing the opportunities and the consequences these offer, and the depth of this lag is growing. Which results in our actions as well as our awareness about their consequences becoming more limited and fragmented; these actions then happen in parallel to and overlapping each other. All of which, in the end, leads to a weaker working class, in terms of either advocacy, community building, solidarity, extending its vulnerability. Still, research results indicate that compared to workers doing experience-based, visual, segmented labor, those who represent a seemingly outdated set of values, a steady practice, and reliability, tend to be more successful on the market in the long run.

Naturally, neither an online panel discussion, nor a blog post allows for a thorough investigation of the work, the workers, and the social relations of the digital age. Nevertheless, the roundtable talk did make it apparent, that researching these topics is possible and also necessary, and that the same is true about archiving the results of such research work, serving future scholars as well as the general public. The discussion also highlighted the responsibility social scientists have, even if on different levels, toward decreasing social inequalities, toward uncovering the fate of the underprivileged. (Not all scientists, as there are those who use their knowledge as applied sociologists or philosophers to justify certain ideologies or political directives.)

Addressing the promises of the digital era, a recent paper coauthored by László Z. Karvalics mentioned—in relation to the potential usage of blockchain technology—the possibility of an isocracy that, based on a more just access to digital commodities, flattens the pyramid of social inequalities. Éva Bognár added, however, that digital technology is not necessarily only liberating, it can also intensify already existing vulnerabilities, such as the inhumane conditions of workers in Amazon storages worldwide. The growing solidarity within workers’ hierarchy may provide a glimpse of hope.

The recording of the panel discussion is available (in Hungarian) here.