Replica of a Distorted Reality

Author(s):
Blinken OSA, Hidden Galleries Project
Tweet
As the exhibition Faith – Trust – Secrecy is temporarily closed due to the coronavirus outbreak, the OSA blog will present segments of the show with links to the Hidden Galleries Digital Archive, where the featured stories and themes can be explored in more detail.
More on the exhibition from the OSA blog:
Secret Religious Activity – Online exhibition tour 1
Toward a Visual Ethics of Secret Police Archives – Opening speech by the curatorJames Kapaló
Non-Scientific Momentums – The Zsuzsa Horváth collection at Blinken OSA

Secret police files were embodiments of the mistrust of regimes toward their citizens. In Communist Romania, the state considered ethnic minorities as a potential threat to the unity of the nation and the territorial integrity of the country. A secret police file of a Hungarian Calvinist Church choir from Vízakna (Ocna Sibiului), in the form of a photo album, was the product of this mistrust. Photo albums are one example of the many possible ways a case could be elaborated by the secret police, and they were often used to illustrate exemplary operations. Probably, officers also created them as a means to impress their superiors. 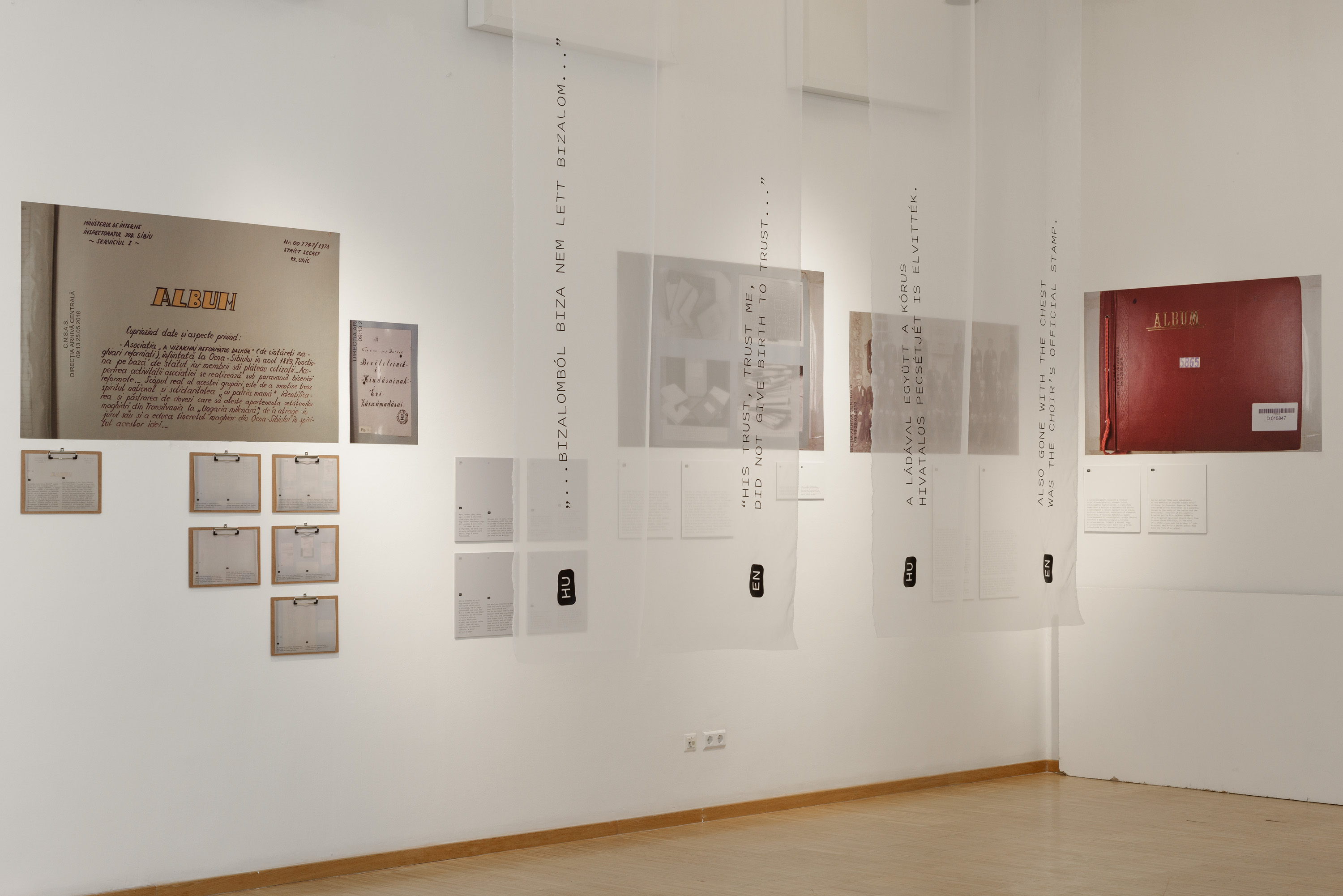 Founded in 1889 in the multi-ethnic and multi-denominational small town of Vízakna (Ocna Sibiului), the Hungarian Calvinist Church choir’s primary task was to sing at the funerals of congregation members and at church services. In 1907, it was reorganized as an association, having a president, secretary, accountant, auditor, its own banner and stamp. In addition to its religious duties, the choir was important for the local Hungarian community, organizing dances and cultural gatherings. Fearful of erasure by the hostile state, some of its members were also avid amateur historians dedicated to preserving the local Hungarian past; one conducted archeological excavations in the vicinity of the settlement, while the former choir secretary, Endre Tamás, produced handwritten notebooks on local history.

After researchers on the Hidden Galleries project discovered the secret police album on the Vízakna choir in the National Council for the Study of the Securitate Archives (CNSAS), one of the project members, Ágnes Hesz approached current members of the choir, in order to find out how it had come about. 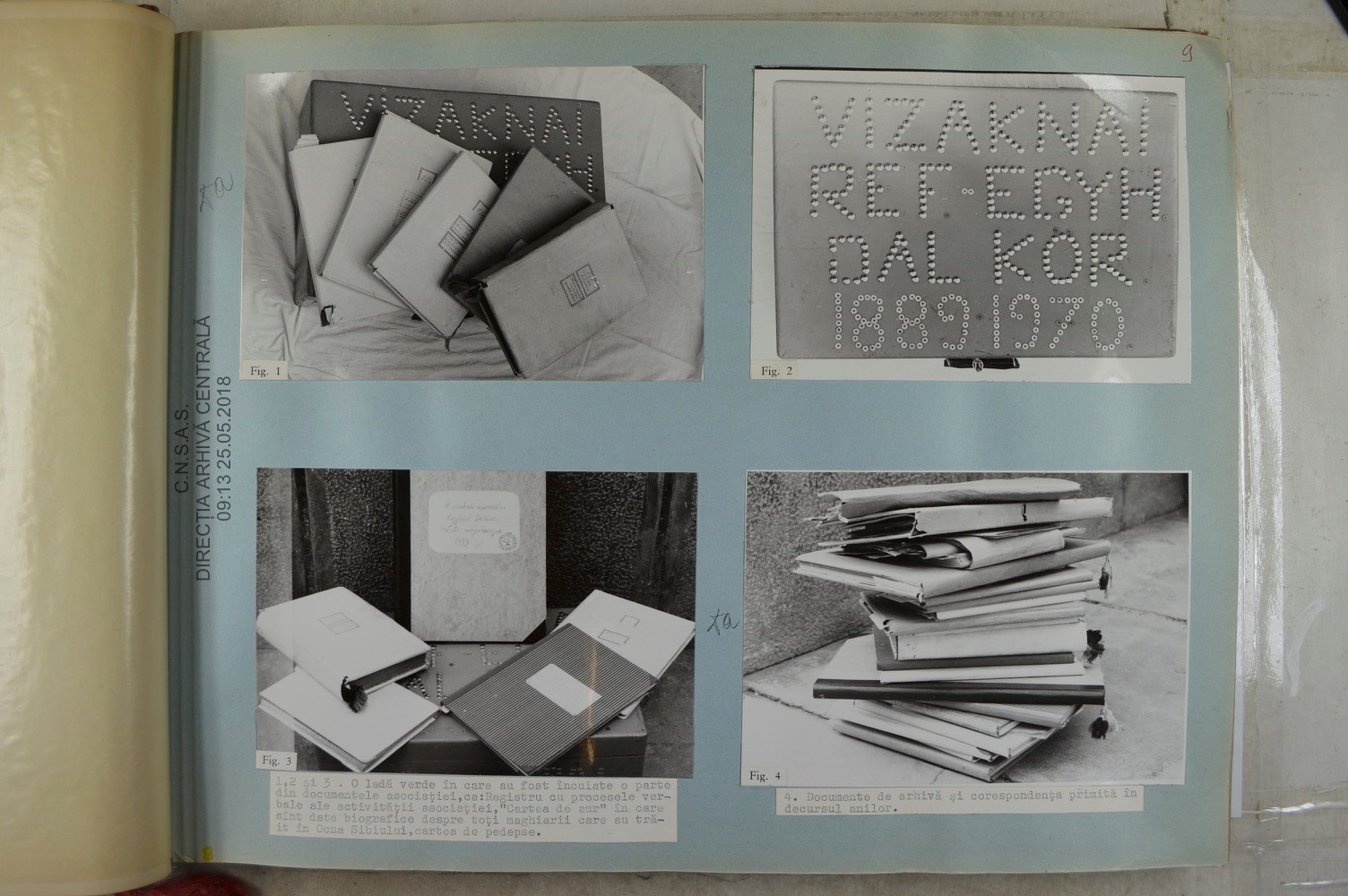 One page from the album, with captions saying:
“Figure 1, 2, and 3. A green chest, in which documents of the association had been locked away, such as: register with the minutes of the activity of the association, ‘The Golden Book’ containing the biographical data of Hungarians in Ocna Sibiului, letters of punishment.”
(Photo: Hidden Galleries Digital Archive/CNSAS)

One day in 1973, a man of Hungarian origin approached Endre Tamás, claiming he was very interested in the history of the community and the choir. Using his ethnicity, he managed to earn the trust of the old man, who lent him his handwritten notebooks on the history of local Hungarians. A few days later, the Securitate raided Tamás’s home as well as the choir meeting room, and took the choir’s archive and memorabilia, which were kept in a green chest. The chest contained the group’s past preserved in photos, minutes of meetings, membership lists, financial reports, inventories, ceremonial speeches, correspondence, and musical scores. Members of the choir shared their memories of these events with Ágnes Hesz:

“Because when he came, he took the notebooks with him, saying he wanted to write an article or something about this . . . and then he took the books, and after that Uncle Endre was summoned by the Securitate for what he had written.”

“But what was interesting was that they would have never ever found these books, had he not shown them to him. Because there was a bolthole in the well, and the books were hidden there. The whole house search, and all that, they wouldn’t have found anything. But he trusted him, took the books out, and then this is what happened.”

“Uncle Endre told him what he had written about, he was into old stories, Uncle Endre, and he talked about it, because he trusted him.”

“He talked about it, because he trusted him, but his trust, trust me, did not give birth to trust.”

The choir in the album – the Securitate version of who they were:
"The genuine goal of the association was to preserve national sentiment, maintain the sense of belonging to the 'mother country,' seek and preserve evidence that Hungarians in Transylvania belonged to the 'thousand-years-old Hungary,' win over the youth of the Hungarian community in Ocna Sibiului, and also educate them in the spirit of these ideas."
(Photo: Andrea Bényi)

The choir was accused of nurturing nationalist-irredentist ideals behind the façade of their church choir and of being hostile to the Socialist Romanian state. The album was carefully designed to support this claim. It starts with a five and a half page report on the history and activity of the choir stating that the choir’s real aim was to maintain the national identity of the local Hungarian minority and to instil Hungarianess in the next generation. The reporting officer made efforts to portray the choir as a conspiratory group not independent of other equally dubious Hungarian organisations. He claimed that it had negative influence on the discipline of the local community. Crime scene photographs taken by the secret police capture the group’s meeting room, focusing on its Hungarian patriotic decoration, while reproductions of confiscated documents (minutes of meetings, financial reports, membership lists, correspondances, musical scores) are amended with explanatory captions that point to the nationalistic nature of the choir.

The man befriending the old secretary was the same Securitate officer who compiled the album. 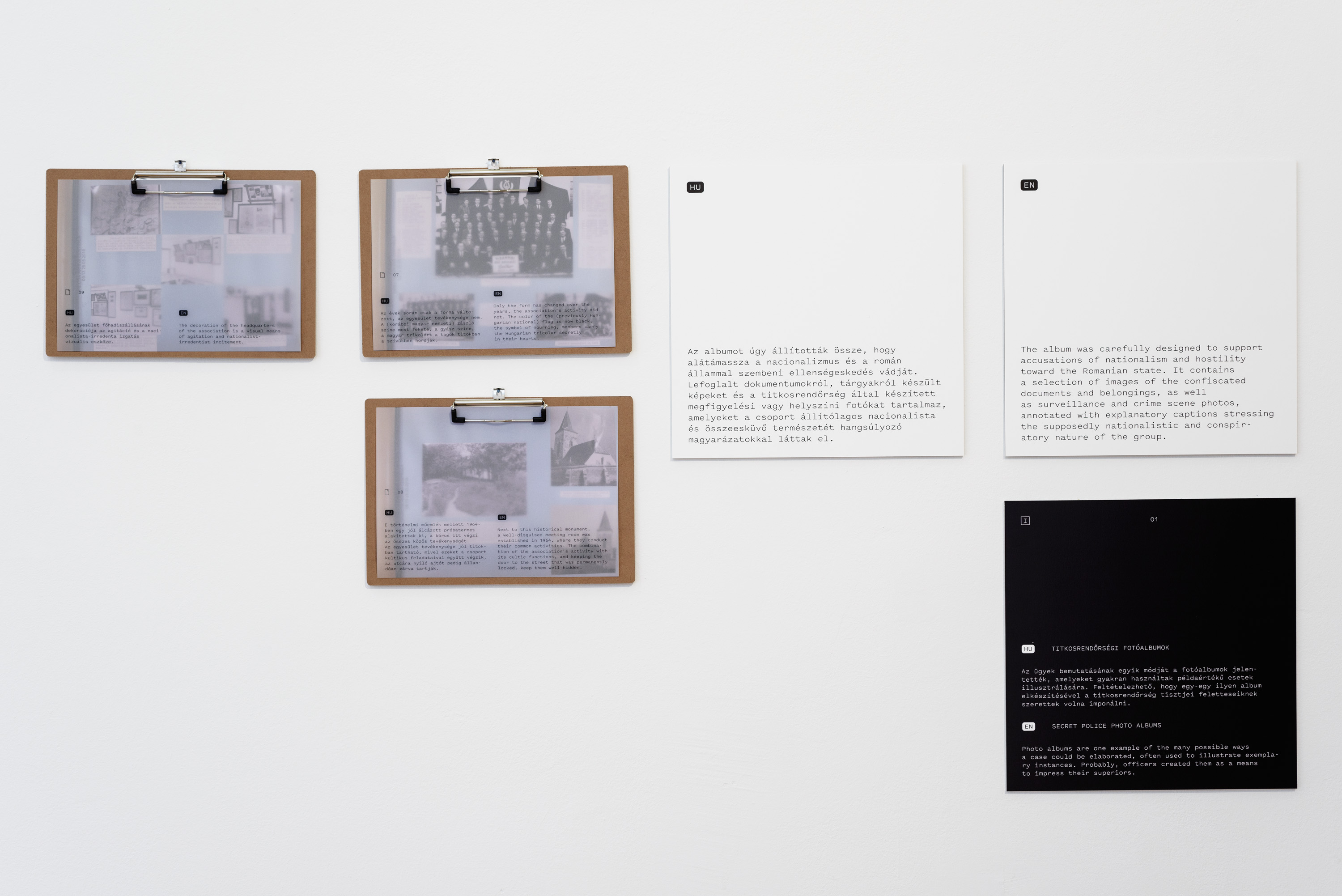 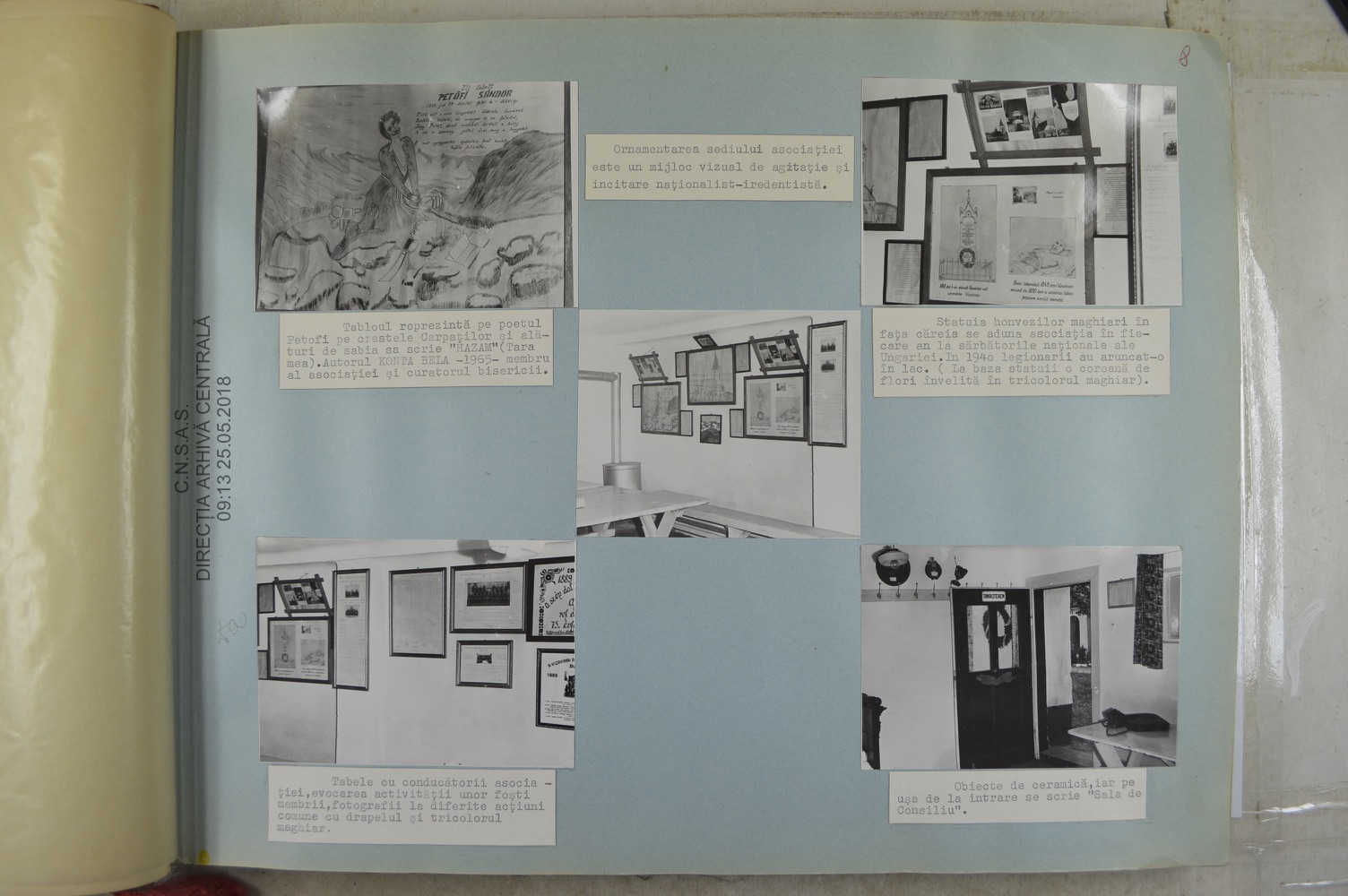 The page with crime scene photos, with captions saying,
“The decoration of the headquarters of the association is a visual means of agitation and nationalist-irredentist incitement.”
(Photos: Andrea Bényi; Hidden Galleries Digital Archive/CNSAS)

Compared to the meticulous execution of the album and the gravity of the accusation, the incident did not lead to serious penalties. Some choir members were admonished, some were occasionally summoned to the Securitate. But no one was arrested and the choir was not dissolved either. However, the incident had a long-lasting effect on the community. Trust was broken, people were aware that their activities were under surveillance, and assumed that they still had informers among their ranks. The documents, Ender Tamás’s handwritten notebooks, or the choir’s stamp—taken during the house searches—were never returned to the community. Tamás reproduced some of the notes, and made a detailed record of what had been taken.

In 2019, CNSAS, the institution that governs the secret police archive in Romania, signed an agreement to release the choir’s album for the Hidden Galleries exhibition in Cluj, where members of the choir could see it. In the end, the archive instead supplied a replica of the album, made to look like the original, which is on view at the Blinken OSA as well. Thus, the album remains in the archives, and only approved researchers can flick through its pages; it continues to be inaccessible to members of the community. 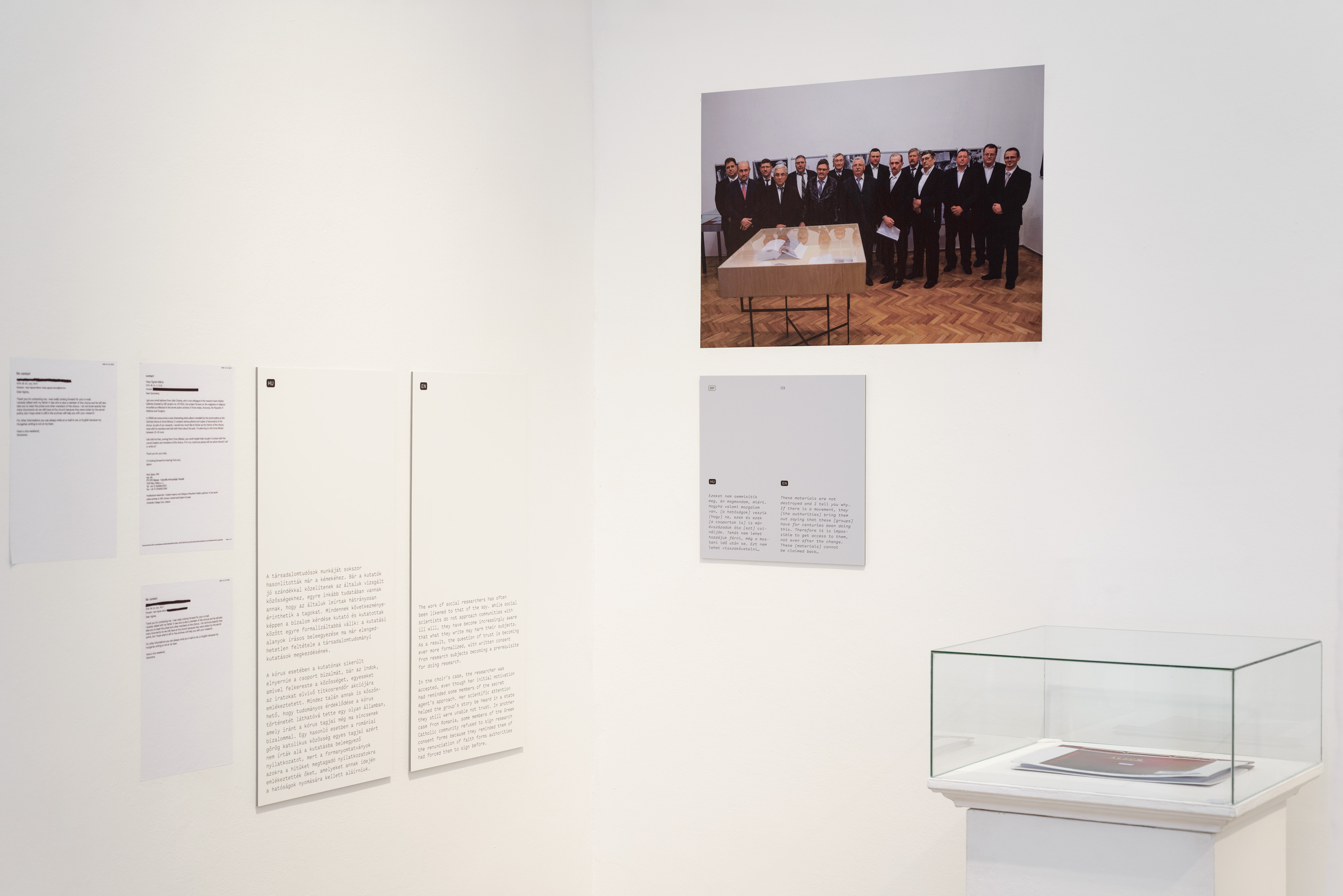 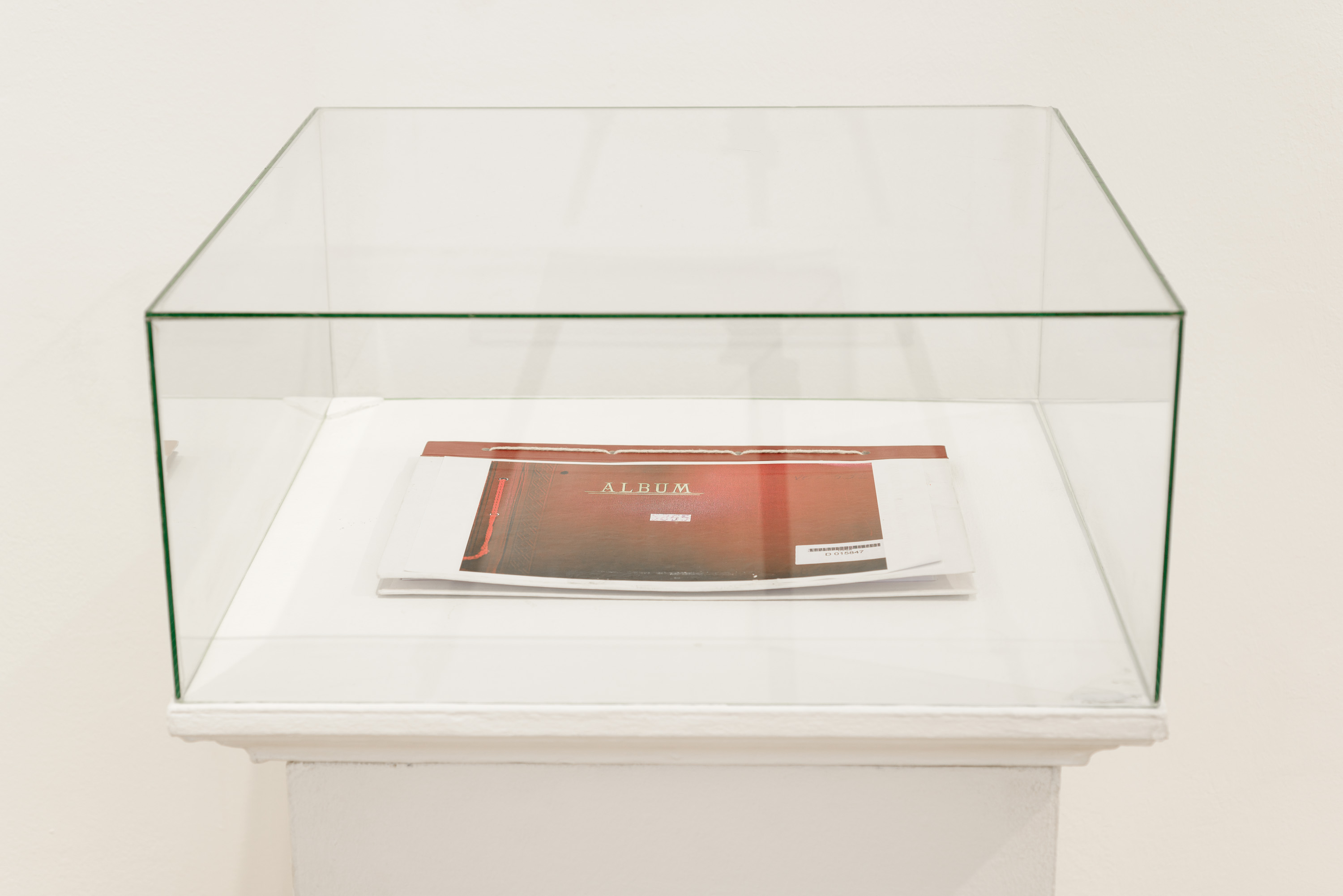 Group photo made in 2019 in the exhibition in Cluj, and the replica of the album.
(Photo: Andrea Bényi)