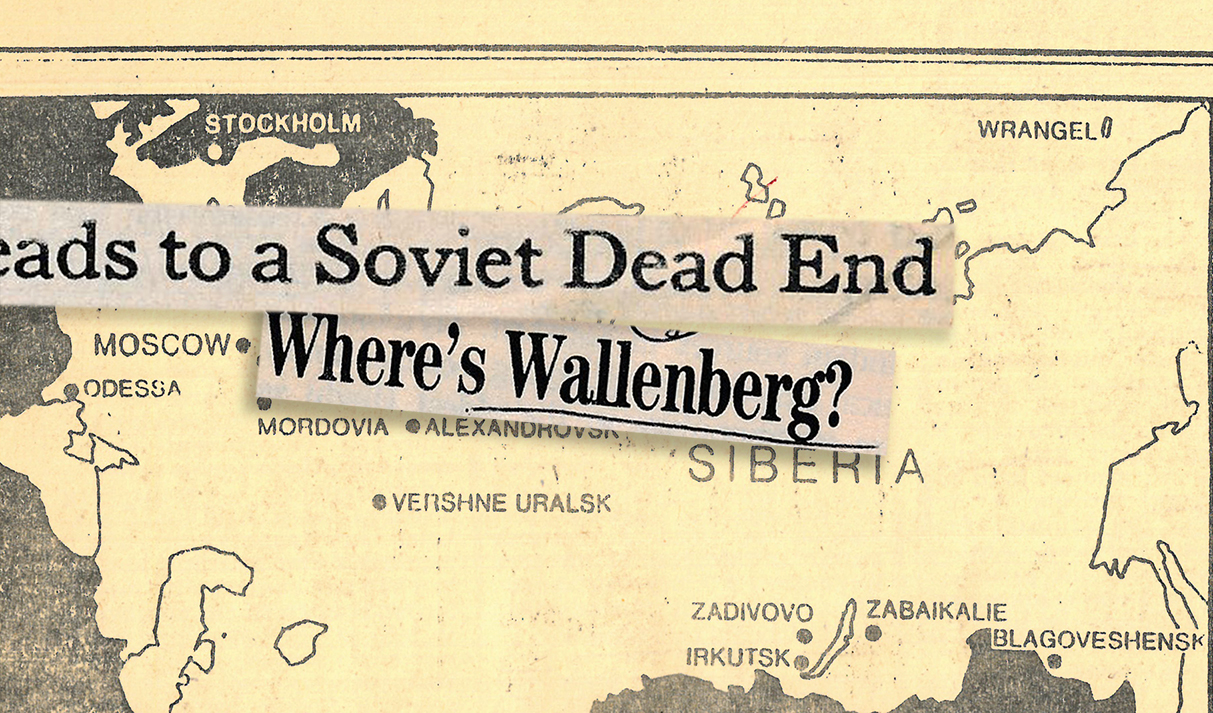 Seventy-seven years ago today, on January 17, 1945, a Swedish diplomat sent as a special envoy to Nazi-occupied Budapest with a mission to rescue Jews from extermination, was detained by the Red Army on suspicion of espionage. The diplomat was Raoul Wallenberg, a businessman and a member of a banking and industrial family; he was never again seen alive. Over the six months the 32-year-old Wallenberg spent in Budapest before his arrest, he issued several thousand protective passports that prevented Hungarian Jews from being deported to death camps across Europe. He also sheltered Jews in buildings designated as Swedish territory. Overall, Wallenberg is credited for saving thousands of Jews from starvation and imminent death. His disappearance in 1945 immediately drew international attention, and his continuous absence became a mystery. With the Cold War unfolding, the Wallenberg case reinforced tensions between two opposing political blocks separated by the Iron Curtain. 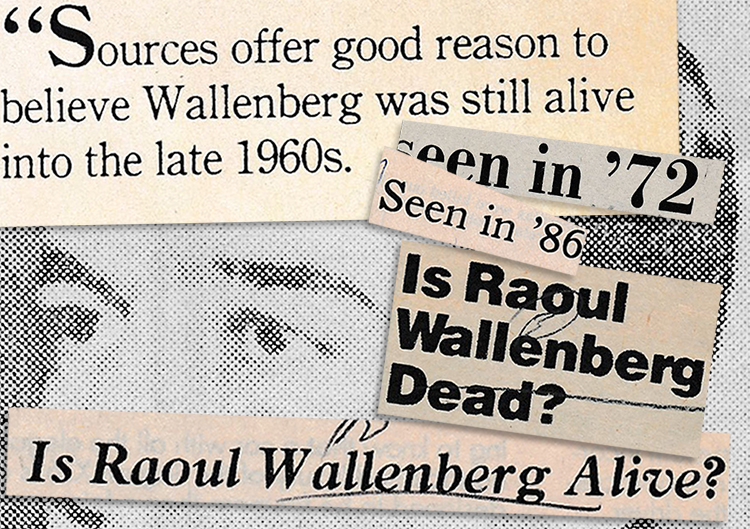 Forrás. [Source., or Boiling point] is a blog series by the Blinken OSA staff at the Hungarian news website 444.hu. Anastasia Felcher is Archivist and Slavic Specialist at Blinken OSA. Her post on the 77th anniversary of Raoul Wallenberg’s disappearance originally appeared on osaarchivum.444.hu.

The pursuit to locate and set Wallenberg free sometimes functioned as a mobilizing cause in the political confrontation with the USSR. For decades, Western diplomats, politicians, international organizations, and activists demanded the Soviet authorities to disclose Wallenberg’s whereabouts. While the search for Raoul Wallenberg is a story of international diplomacy and conspiracy, it also provided the act of saving Hungarian Jews from right under Adolf Eichmann’s nose with global acknowledgement. The Vera and Donald Blinken Open Society Archives holds a fully digitized archival collection on Raoul Wallenberg. These documents are parts of the Blinken OSA Jewish studies collection. Spanning over 2,300 pages from 1964 until 1994, the press clippings, reports, and samizdat publications originally compiled at the various departments of Radio Free Europe/Radio Liberty’s (RFE/RL) Research Institute, reveal how the Wallenberg case went far beyond war history, and became a symbol of withholding the truth; a story of desperation, but also of hope, with Wallenberg’s public memory fluctuating between martyrdom and heroism.

An exemplary case of international agency and memory work; the documents witnessing the attempts to solve the Wallenberg mystery year by year reconstruct this story from three perspectives. First, the files report on clashes between Western and Soviet diplomats over the reasons for Wallenberg’s arrest back in 1945, and speculate on his location and if he was dead or alive. Second, the archival holdings bring in multiple real or imagined witnesses who over the years claimed to had seen the diplomat kept in various Soviet prisons, camps, or psychiatric wards. This evidence, some of it rumors, has been spreading through unofficial channels, such as former camp prisoners emigrated from the USSR, or samizdat. Third, the documents reveal the memorial agency of, among others, mass media, in commemorating Wallenberg’s confrontations with Eichmann and his activity saving Hungarian Jews.

Already in the 1960s and 1970s, efforts to reveal the truth about Wallenberg’s destiny involved high-ranking politicians and public figures, such as Israeli Prime Minister Menachem Begin, Nazi hunter Simon Wiesenthal, dissident writer Alexander Solzhenitsyn, or Soviet dissident activist Andrei Sakharov, as well as the diplomat’s family. In 1963, Yad Vashem paid tribute to Wallenberg by recognizing him as a Righteous Gentile and planting a tree in his honor in Jerusalem. In 1979, an official request by the Swedish side was addressed to the Soviets at the Vienna summit, where President Carter sat down for his first talks with the Soviet leader Brezhnev. This request, as many others before and after it, gave no results. The USSR continued to repeat its 1957 statement claiming that Wallenberg died in 1947 in prison at the KGB headquarters on Lubyanka Square in Moscow, due to a heart attack caused by his weakened health.

Over the years, the Wallenberg case became a bone of contention for Swedish and Soviet diplomatic relations. Multiple international Wallenberg hearings followed in the 1980s, and failed to locate the diplomat. In 1980, the US House of Representatives formed a committee that publicly expressed deep concern over Wallenberg’s fate. Indicating the priority of the case, Wallenberg was granted honorary US citizenship in 1981 (and Israeli in 1986). Apart from being an important memorial act, making the diplomat a US citizen placed him under the protection of state institutions. In 1983, the Swedish diplomat was among the nominees for the Nobel Peace Prize for his humanitarian work, yet his candidacy was questionable due to the uncertain status of being alive or dead. In the following years, various US officials, such as the Secretary of State, continuously addressed the issue on international events and conferences, including a European security conference in 1984. The same year, the US Department of State proclaimed that the Soviet Union had a moral obligation to put to rest the questions concerning Wallenberg. In the 1980s, defenders of the Wallenberg case insisted on interpreting it within the human rights paradigm. In 1986, the UN-based International Human Rights Group appealed to the UN Secretary General to file a demand addressed to Mikhail Gorbachev to free the diplomat. The group argued that what had happened in Budapest violated international law and was a grave example of human rights violation. 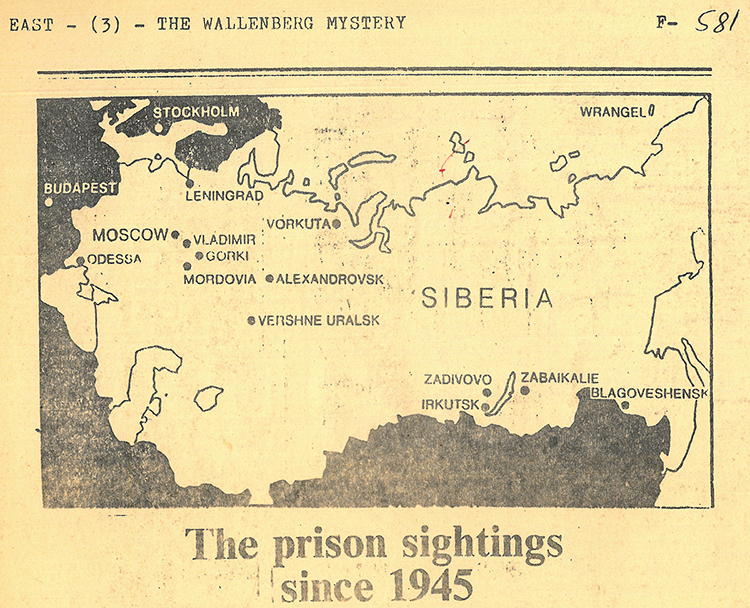 The prison sightings since 1945 where Raoul Wallenberg was allegedly imprisoned over the years,
excerpt from an article originally appeared in The Times on July 27, 1981
(HU OSA 300-85-13 Records of the RFE/RL, Samizdat Archives, Biographical Files)

To promote the development of the case, in 1979, the first International Wallenberg Committee was founded; by 1981, Wallenberg committees were active in six countries, four years later there were twenty-five such committees all over the world. These committees, beyond appealing to politicians, organized public protests in front of Soviet diplomatic missions or embassies, and supported new memorial initiatives. Addressing the Soviet authorities, they claimed that releasing Wallenberg or at least giving new information about his whereabouts was a humanitarian obligation. Holocaust survivors’ organizations and various Jewish communities provided further platforms for agency. In the West, cities like New York, Washington DC, Los Angeles, or Toronto, had public spaces renamed after Wallenberg, echoing the same agenda discussed above; in 1985, for instance, when the city of Orange, California, inaugurated its renamed Wallenberg Square, speeches claimed that the diplomat had insisted on human rights, freedom, and brotherhood.

For years, multiple witnesses, real or not, contributed to the search for Raoul Wallenberg. Testimonies of Jewish survivors of the Budapest ghetto, either in writing or television interviews, were taken into account. Most of the reports of seeing Wallenberg alive originated from former Soviet inmates, be those recent emigrants from the USSR, or former German POWs. Some stories of allegedly seeing Wallenberg alive in Soviet prisons or camps, were circulating in Samizdat. In 1985, an issue of the samizdat journal Chronicle of Catholic Church in Ukraine contained an appeal of the former political prisoner and dissident Iosip Terelya, who not only claimed to had seen Wallenberg alive, but blamed Brezhnev for the diplomat’s arrest. In 1987, the former KGB officer Efim Mushinski also reported on the diplomat being alive in the USSR. Over the years, prisons, camps, and psychiatric wards all over the Soviet Union were mentioned as potential sites of the diplomat’s imprisonment.

Despite the challenges of memory politics behind the Iron Curtain, one city remained to be special for the Wallenberg case; the city of Budapest. In 1985, a memorial that commemorated Wallenberg and at the same time captured the convoluted history of commemorating him in Hungary, was erected in the garden of the US embassy in Budapest. Decades earlier, in 1949, a monument to the diplomat in the form of a man defeating a snake was removed from the city’s Szent István park the night before its inauguration. The 1985 monument, on the surface of a broken granite sheet framing the main figure of Wallenberg, recalled the contour of the former sculpture. In 1987, the US government approached the Hungarian leader János Kádár with an offer to relocate the new monument from the embassy to a public space as a gift to the Hungarian people. As this was still a highly sensitive move that have sparked the Soviet side’s disapproval, Kádár accepted the gift reluctantly. The monument was inaugurated with a very modest ceremony. In this light, Western media claimed that unveiling the new monument was an important act of courage. It also triggered a new wave of interest in the Wallenberg case in the Hungarian media. 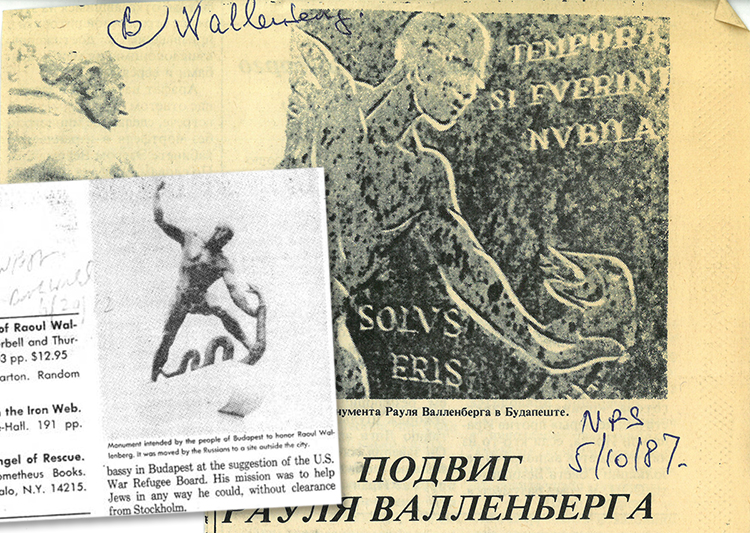 With the Wallenberg mystery remaining unsolved for decades, some activists lamented that due to a diplomatic impasse, the Swedish diplomat was becoming a symbol of injustice, rather than a symbol of humanity. Mass media, including television, significantly contributed to communicating the Wallenberg case to mass audiences. News items named the diplomat “the lost (or vanished) hero of the Holocaust,” “Jesus Christ or Moses of the 20th century,” “a missing hero,” “an angel of mercy in hell,” “one of the greatest stories of justice and heroism of the entire generation,” “one of the genuine heroes of WWII,” “the hero braver than fiction,” “great-hearted and brave personality,” and “an authentic Jewish hero.” In 1981, the highly acclaimed book With Raoul Wallenberg in Budapest was published, introducing the topography of saving Jews in the Hungarian capital. In 1985, for the 40th anniversary of his disappearance, the US television broadcasted the movie Wallenberg: A Hero’s Story. Later, more TV drama productions followed. In these movies and documentaries, Wallenberg was shown as a great person, humble and courageous, yet deeply miserable. Another side of this international fame was exaggerating the number of Jews saved by Wallenberg. Documentaries as well as newspaper articles credited the Swedish diplomat with saving about 100,000 Hungarian Jews, which was far beyond real numbers. By doing so, mass media also diverted attention away from other diplomats and citizens who had taken part in rescuing Jews. 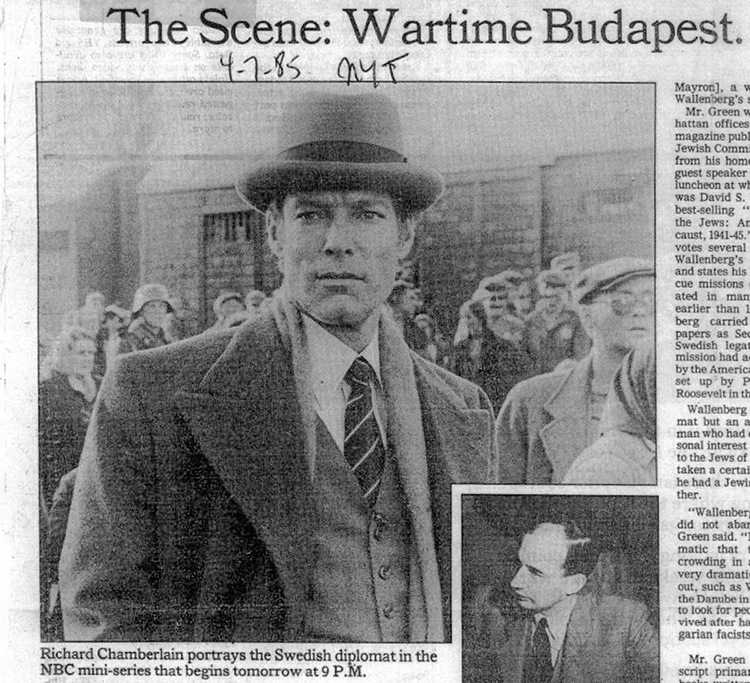 With Mikhail Gorbachev announcing the policies of glasnost and perestroika in the second half of the 1980s, many journalists and activists expressed their hope that this would bring a long-awaited progress in the Wallenberg case. Many claimed that the Wallenberg mystery was a litmus test for the new Soviet leader on how far he was ready to go with democratic reforms. Revealing the location of the Swedish diplomat, the press claimed, would be beneficial for Gorbachev, as it would demonstrate to the international community how much different he was compared to his predecessors. These hopes, however, remained unfulfilled; Gorbachev, again, insisted that the diplomat died back in 1947.

In 2016, the Swedish Tax Agency declared Raoul Wallenberg legally dead in absentia, recording 1952 as the year of his death (counting five years after his disappearance). This put an end to the speculation of whether the diplomat was still alive, but not to the mystery behind his entire case. A mystery that, as this essay showed, was for decades fed by political and memory work, which is retraceable at Blinken OSA.