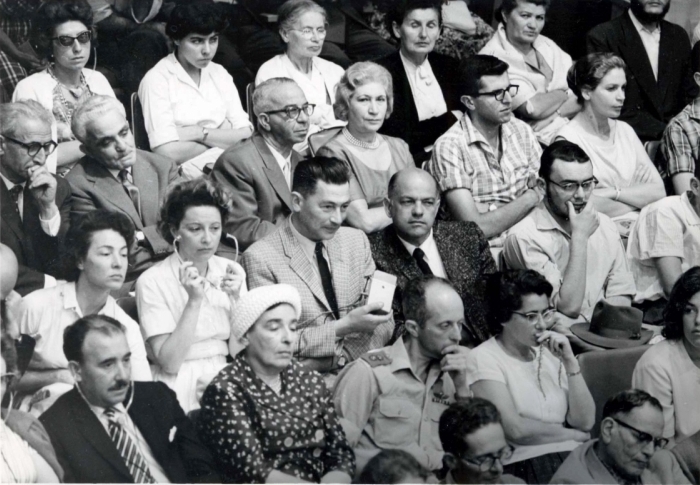 The Eichmann trial began sixty years ago today, on April 11, 1961, in Jerusalem, Israel. The German-Austrian Adolf Eichmann was the SS-Obersturbannführer overseeing the department at the Reich Security Main Office (RSHA) responsible for “Jewish affairs.” He designed, organized, and lead the deportation of European Jews in occupied and satellite countries. The impact the Eichmann trial had on the public afterlife and the historical processing of the Holocaust can hardly be overrated. The trial transformed the existing concepts and ideas of the West on Nazi genocide, and shifted the focus toward the Nazi race concept and the termination of Jews, thus reinforcing the antiracist nature of Western democratic-antifascist identity, rejecting anti-semitism.

Forrás. [Source., or Boiling point] is a blog series by the Blinken OSA staff at the Hungarian news website 444.hu. András Mink's post commemorating the 60th anniversary of the Eichmann trial originally appeared on osaarchivum.444.hu in Hungarian. 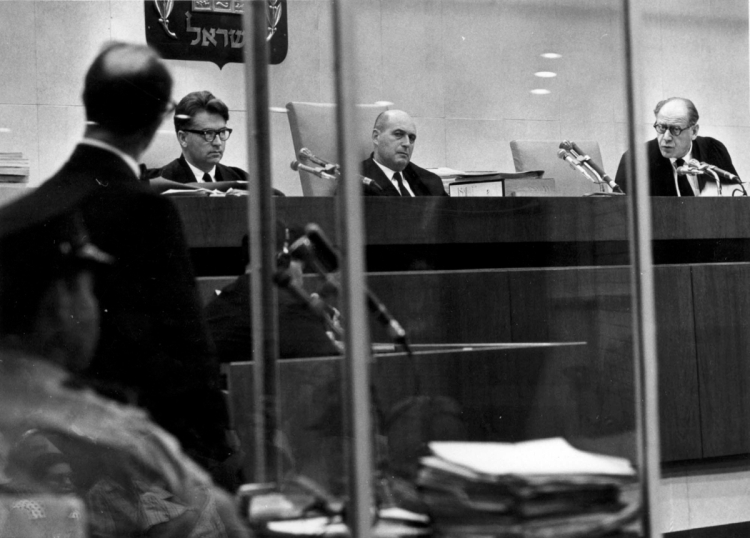 The judges, Adolf Eichmann standing on the left, and, mirrored in the bulletproof glass, the audience, 1961.
( Yad Vashem Photo Collections)

Furthermore, the trial brought about a turn in the historiography of the Holocaust, and changed the attitudes of the Israeli state and public toward the European Holocaust, previously characterized by the notions of distance or incomprehension; why didn’t victims resist, why did they let themselves be hauled to camps and gas chambers in masses? Lastly, the trial inspired Hannah Arendt’s well-known (and much-debated) description of the “banality of evil”: perpetrators of crimes are not Satanic figures but average individuals, clerks in cheap suits, who execute horrible orders with dispassionate indifference.

For Radio Free Europe (RFE), operating in Munich, covering and interpreting the Eichmann trial in 1961 posed entirely different challenges. Whether Eichmann deserved to answer for his deeds before court was not questioned at all. International legal disputes revolved around the proceeding had been settled by the time the trial began; Argentina, if reluctantly, accepted that the Israeli secret service violated the country’s sovereignty by kidnapping Eichmann while in exile in Argentina, and the international community acknowledged the legal authority of the state of Israel. However, archival documents preserved at the Blinken OSA reveal that in the context of Cold War differences and propaganda war, the trial was a sensitive issue for other reasons. Already at an early stage, the radio’s directors and consultants in New York called attention to an expected “clash” with the Soviet bloc’s media and propaganda machinery. This is apparent in the encrypted messages and confidential instructions exchanged between the Munich and the New York headquarters of RFE.

RFE analysts and consultants were right to presume that the Soviet bloc’s official communication regarding the trial would be centered around West Germany and its partially processed Nazi heritage, and through that, the US-lead “imperialist camp,” too. The latter, owing to its anti-Soviet and anti-Communist stand, had been depicted in the Cold War propaganda of the Soviet bloc as the heirs, successors of Nazism and Fascism, since the late 1940s. This idea matched the definition of Fascism Georgi Dimitrov had put forward in the mid-1930s as General Secretary of the Communist International, thus, essentially, reflecting Stalin’s view, describing it as “the open terrorist dictatorship of the most reactionary, most chauvinistic, and most imperialist elements of finance capital.” Therefore, according to its Communist, Cold War interpretation, Fascism’s main feature was not race theory, and its prime enemies were not “Jews,” but Communism and the Socialist world system, and its victims were the communists and other “progressive” people committed to a Socialist future.

Consequently, RFE analysts considered the trial an opportunity for Soviet propaganda to question the democratic devotion and credibility of the West and to put the Communist image of Fascism on center stage. They forecasted this line to be especially catchy in “front countries” like Czechoslovakia and Poland, neighboring German territories, where, due to war traumas and the memory of the German occupation, anti-German feelings or angst over a reviving German power were stronger and the relation toward Germany was seriously fraught with difficulty. It is no accident that the Czechoslovak and the Polish offices of RFE produced several Situation Reports on the Eichmann trial’s local reception (e.g., here and here).

It was the above propaganda that the RFE coverage of the Eichmann trial had to neutralize in the first place, and oppose with a counternarrative; as evident in an encrypted message sent on March 29, 1961, from the New York headquarters to the editorial offices in Munich. The short, concise message called attention to the following; the Communist media is likely to exploit the trial in order to arouse anti-German feelings especially among Czechs and Poles, and to discredit the Western allies of the Federal Republic. The message warns that the situation would become problematic if witnesses addressed the responsibility of personalities holding public or governmental positions in the FRG. (A number of West German university professors, civil servants, and politicians did in fact have Nazi pasts.) In order to counter expected attacks, radio editors received from New York the following set of guidelines: 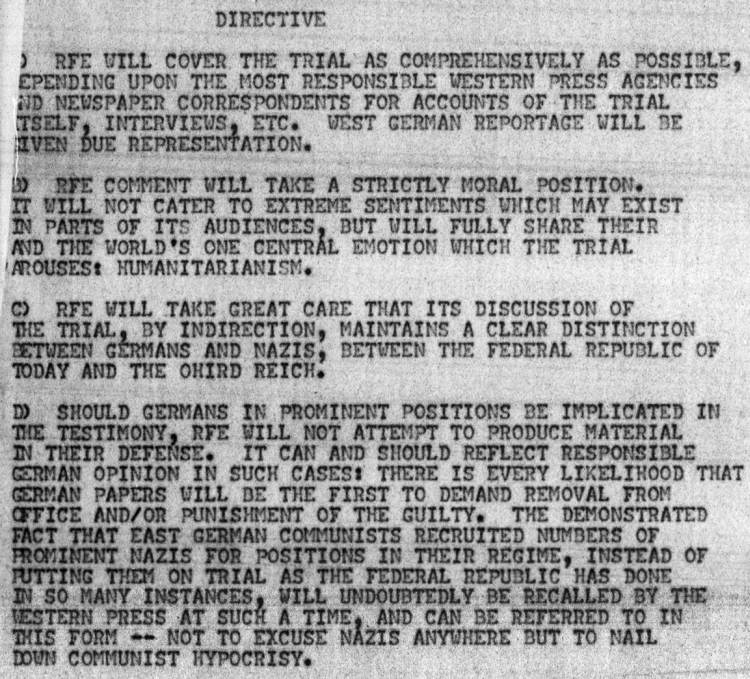 Directives also determined how the radio should react to Eichmann’s probable defense claiming himself to be “only a small cog in the machine” executing orders, who did not make the decisions. The false excuse of “following orders” was to be disproved employing abstract, philosophical analysis, while also emphasizing the personal moral risks of serving totalitarian regimes. The choice of words is not accidental. Once the Communist propaganda stigmatized the West as the successors of Fascism, the West responded from the 1950s with the concept of totalitarianism. This approach drew substantial similarities between Nazi and Communist dictatorships, based on common features and parallels, such as the complete deprivation of rights, political persecutions, mass deportations and mass killings, concentration camps and the Soviet network of forced labor camps (GULAG). 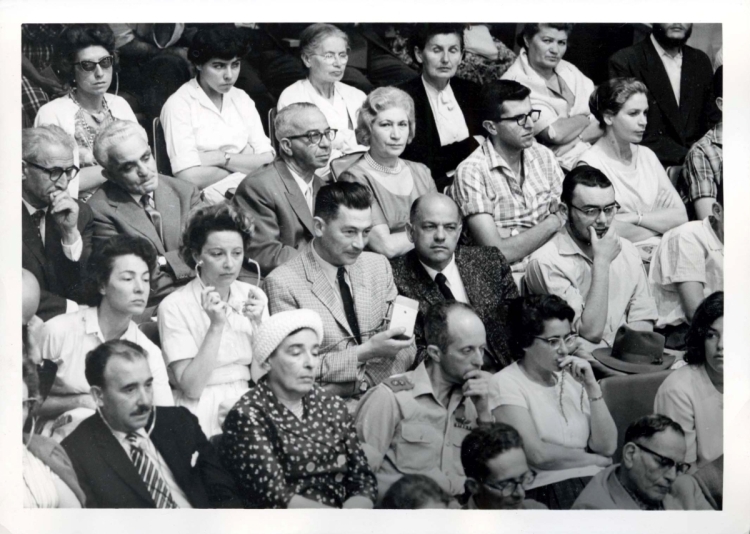 The absence of a full picture in Hungary

It is well-known that the Hungarian Holocaust, the deportations during the spring and summer of 1944, stands out even among the monstrous crimes Eichmann had committed. The removal of Hungarian citizens qualified as Jews, 437 thousand people in eight weeks, which is unparalleled in the history of the European Holocaust, was considered by Eichmann his “most successful” operation.  Moreover, this was the only time that Eichmann himself organized and oversaw the procedure on site. He and his small commando, however, had no chance to carry this out, had it not been for the widespread and active contribution of the Hungarian administration, the authorities, and the police; a fact that even Eichmann highlighted later, “praising” the Hungarian government of the time, the political leaders, and the state apparatus, for their “remarkable” readiness to cooperate.

The instructors at RFE did not, however, group Hungary among potentially problematic countries, as far as the trial was concerned. Although Hungary was a satellite country, maybe they thought that arousing anti-German or anti-imperialist feelings four and a half years after Soviet tanks had crushed the Hungarian Revolution of 1956, and while the country still lived in an atmosphere of fear and terror, was unlikely to be effective. Nevertheless, the RFE Research Insitute’s Hungarian unit compiled and archived the news and analyses the official Hungarian press published on the Eichmann trial. Between 1960 and 1962, a separate file was opened on the subject.

Titled "The Eichmann Trial Begins Today," the commentary in the April 11, 1961 issue of the Party daily Népszabadság claimed that "the public demands the resurgent Fascism to be condemned as a whole."
(Arcanum Digitheca)

The hundreds of press clippings in the file reveal that the official Hungarian reactions and commentary essentially followed the general line of the Soviet bloc. The articles mostly insisted on German responsibility and a persevering Nazi presence in postwar West Germany. As Eichmann was the trial’s only accused, the contribution or responsibility of the Hungarian state of the time was hardly addressed or only in a superficial way, apart from a few exceptions; in spite of the fact that Eichmann’s Hungarian “accomplices” were included in the reports as a sort of “individual perpetrators”. This may well have had political motivations. On the one hand, detailing the crimes of “Horthy fascism,” or implicating a “Fascist Hungarian people,” would have overly resemble the Rákosi era, while on the other, the Kádár regime justified the crushing of the 1956 revolution by interpreting it as a counterrevolutionary attempt at restoring the very Fascism that Eichmann, too, represented. Therefore, presenting a full picture could have interfere with the regime’s struggle to leave these memories behind, and disturbe its consolidating policies in general.

Fundamentally, unlike in Western democracies, the Eichmann trial did not bring about a paradigm shift in Hungary’s or the Soviet bloc’s public discourse on the Holocaust. Here, the paradigm shift waited until the 1980s, when The Politics of Genocide by Randolph L. Braham, an American historian of Hungarian descent, was translated into Hungarian in 1988, a new generation of Holocaust researchers emerged, and the authoritarian regime collapsed.