What Do Archives Reveal about the Birth of Democracy in Russia?

The elections took place under a new electoral law and amendments to the Constitution of the USSR, adopted by Mikhail Gorbachev in 1988. These amendments were part of Gorbachev’s political reform course and, among others, created the Congress of People’s Deputies, from which the Supreme Soviet would be elected. In this process, the amendments also introduced the possibility to nominate deputies from beyond the Communist Party of the Soviet Union (CPSU). After the runoffs, 2250 people’s deputies have been elected. Gorbachev himself was elected as Chairman of the Supreme Soviet, and the elections marked a milestone for further setting up the Parliament—and democracy—in Russia and the states that would soon become independent. Archival evidence on this 1989 elections—held, among others, at the Blinken Open Society Archives—reveal the fragility of the mechanism of introducing a competitive political scene on the soon-to-be ruins of the authoritarian superpower.

Forrás. [Source., or Boiling point] is a blog series by the Blinken OSA staff at the Hungarian news website 444.hu. Anastasia Felcher's post originally appeared on osaarchivum.444.hu in Hungarian, presenting archival documents on the first partially free legislative elections in the Soviet Union in 1989. 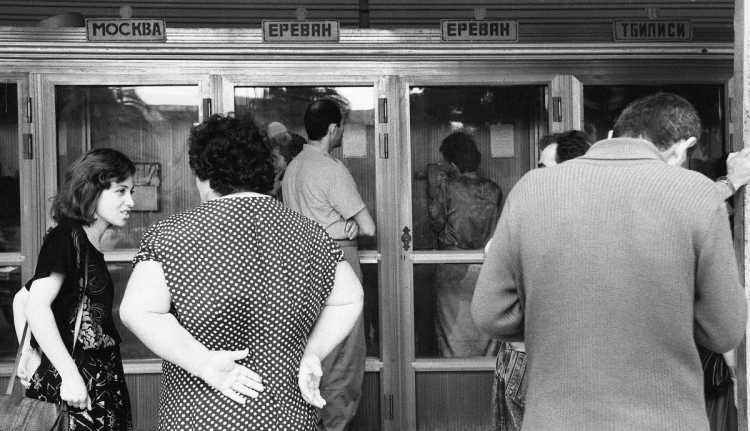 People waiting in a telephone queue in Sukhumi.
(Lenke Szilágyi: Sukhumi, 1991. From Post-Soviet, an exhibition at Blinken OSA)

The archival documents on candidates’ electoral campaigns, such as pamphlets and addresses, demonstrate the achievements brought by the reforms Gorbachev had introduced several years earlier. Although the newly introduced elective legislation did not presuppose or target eliminating the dominance of the Communist Party as a possible outcome of the elections, the latter brought an important number of democratic candidates to the Supreme Soviet of the USSR. Academic and cultural societies and unions, as well as public organizations with all-union bodies, were allowed to nominate candidates. Not only were the elections competitive, partially alternative, and by a secret ballot, some candidates even built their platform on openly criticizing the CPSU and its representatives, known as the apparatus. 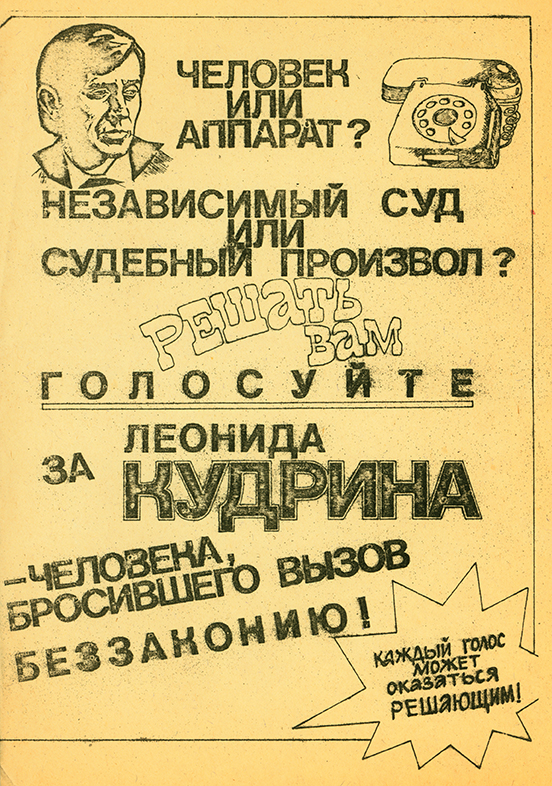 Candidate Kudrin's Election Leaflet, playing with the word apparatus , meaning both state organizations and machine: “Man or apparatus? Independent court or judicial arbitrariness? It is up to you to decide. Vote for Leonid Kudrin; a man who challenged lawlessness! Every vote is crucial!”
(HU OSA 300-85-3 Records of RFE/RL, Samizdat Archives)

By granting academic and cultural societies an opportunity to nominate candidates, Gorbachev made it possible for the Soviet dissidents and leaders of the democratic movement, such as Andrei Sakharov, Dmitry Likhachev, Ales Adamovich, Egor Yakovlev and Gavriil Popov, to be elected as people's deputies. Sakharov's electoral platform, held at the Blinken OSA, emphasizes the academician’s priorities, such as social justice, human rights, demand to make data on the crimes of Stalinism and unjustified repressions public, disarmament policy, and convergence (rapprochement) of Capitalist and Socialist systems. In their electoral leaflets and campaigns, democratic candidates addressed the voters promising—once elected—to contribute to eliminate the vices of late Soviet reality, with its all-pervasive restrictive bureaucratic system unresponsive to the needs of individuals and apparent social injustice.

Candidates targeted the areas of their professional activity, and their experience of dissent or being sanctioned by the authorities became an asset in the election race. For instance, in the 1980s, the candidate Leonid Kudrin was a people’s judge in Sverdlovsk (present-day Yekaterinburg). Kudrin refused to consider administrative cases against participants of political demonstrations and rallies. For this, he was suspended from work, left the CPSU, and later joined the party Democratic Union. Campaigning in the 1989 elections, the former judge emphasized the flaws in the USSR judicial system and the tight interconnection of the latter with the apparatus. Kudrin was elected as People’s Deputy in the Sverdlovsk national-territorial district no. 25.

Democratic forces also claimed to register multiple cases of violation of electoral procedures. There followed complaints and hearings. Evidence of these violations is preserved, among other documents on the event, at the Blinken OSA. Two telegrams, for example, were addressed directly to Mikhail Gorbachev. The first telegram, authored by Irina Bogdanova and Sergei Kornev, reported that “apparatus candidates” denied them the opportunity to support deputies with a democratic civic position at rallies that extended beyond the Proletarsky District, thus preventing any activities in the neighboring districts and territories. The other telegram opposed a number of court proceedings against members of the human rights society Memorial. The latter were accused of petty hooliganism for their behavior while being people’s observers at the polling stations in Moscow’s Proletarsky District. The telegram claimed that the accused were, in fact, acting to prevent massive falsification of voting results. 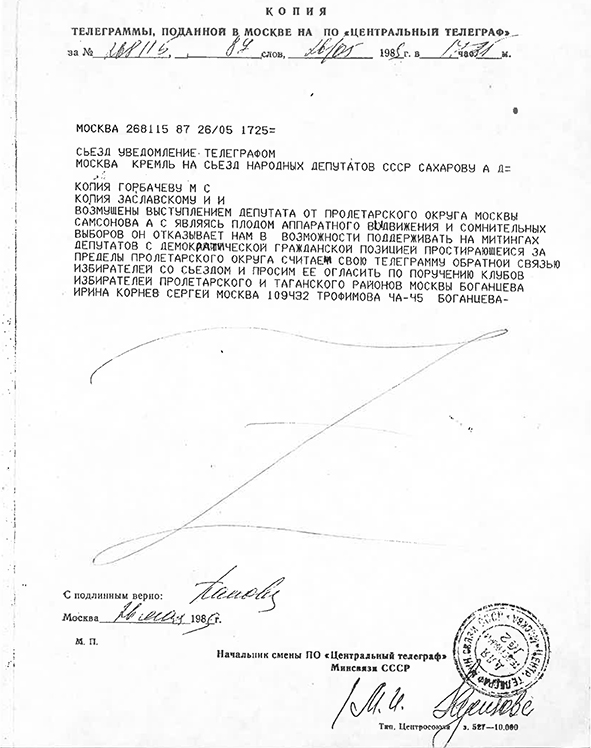 Eventually, the elections brought 87% CPSU members and candidates for members, 13% non-party members, and 15.7% women, as people's deputies to the Congress, and among the elected deputies 10.5% were party workers, 6.7% Soviet workers, 4.2% trade unions representatives, 3.6% military personnel, and 0.3% religious leaders. Following the elections, the Congress of People's Deputies gathered five times, last time on September 5, 1991, when, at the suggestion of Gorbachev as the President of the USSR, the Congress adopted a decision on self-dissolution. This became one of the decisive indicators of the dissolution of the Soviet Union later that year.

As a major political event in the turmoil of the transforming world order, the 1989 election, its visibility, and the impact of democratic candidates, received a wide spectrum of reactions by academics and intellectuals in Russia and beyond. This included questioning the real extent of democratization of electoral and political system that Gorbachev had managed to achieve, as well as whether voting for democratic candidates indicated the overarching support for reforms, or a protest vote against the apparatus. The documents at the Blinken OSA reveal these debates.

The documents arrived at the Blinken OSA following the agreement with the Radio Free Europe / Radio Liberty that entrusted the Archives with holding, preserving, and providing public access to the materials of the RFE/RL Research Institute formerly located in Munich.