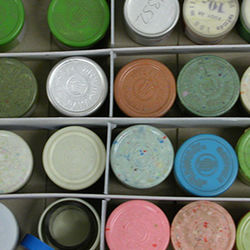 The collection comprises 178 filmstrips of an explicit propaganda or ideological nature, produced by Magyar Diafilmgyártó Vállalat (Hungarian Filmstrip Production Company) between 1948 and 1989, and whose temporal coverage spans the decades 1917 to 1989. The items contained in the collection were compiled on a thematic basis from Ferenc Bíró’s extensive filmstrip collection.

In Hungary, large-scale production of filmstrips began in the 1950s. The relatively cheap technology was recognized as an effective tool for the dissemination of popular science, adult educational material as well as political mass propaganda. While today filmstrips are exclusively produced for children and for home use, filmstrips in the past covered a wide range of topics, and were projected in community halls, schools or even in the army. The propaganda filmstrips address a wide range of topics including revolutions around the world, five-year plans, the collectivization of agriculture in the 1950s, and the achievements of Soviet space research, while later filmstrips from the Kádár era focus instead on popular education, sports, and Hungarian cultural and folk traditions.

In the 1970s, mandatory deposit copies were placed in public collections, such as the National Széchényi Library and the Budapest Metropolitan Ervin Szabó Library. However, the largest filmstrip holding in Hungary is a private one: Ferenc Bíró’s collection includes close to 4,000 films as well as various types of projectors and ephemera. The Virtual Filmstrip Museum, a webpage built with the support of OSA Archivum, is based on Bíró’s collection.