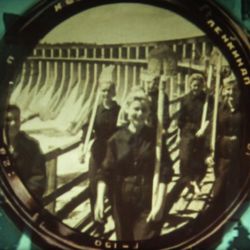 The video collection contains 109 films: popular science, industry, agricultural, army, nature, music, youth and sport films, and also some newsreels. The majority of them were produced in the Soviet Union (98 titles); others were made in Hungary (5), Romania (3), Belgium (1), Bulgaria (1) and Czechoslovakia (1). They were shot on 16mm celluloid film, and released between 1944 and 1987, predominantly in the 1970s and 1980s. Most of the films are dubbed into Hungarian (87). The 16 mm celluloid film prints were stored and occasionally screened for targeted audiences at special screenings in Hungary. One of these venues was the ‘House of Soviet Science and Culture’ in Budapest. This explains the vast variety of topics that the collection covers, from Soviet cartoons to guerrilla tactics in Palestine; from the construction of the Baikal-Amur railway line, or the building socialism in Afghanistan to the sanatoriums in Crimea.

These films cover a wide range of topics and were made not merely to educate the audience about their subject matters which ranged from soil erosion and modern farming to international relations, child care, history of WWII, nuclear energy, oil production, animal breeding, and the art works in Hermitage, just to name but a few themes. They were to instil a particular worldview and to capture the imagination, to win over the hearts and minds of the viewers to the Communist ideology and to the Soviet cause. The majority of the films tell the Soviet version of both history & science, portraying the Soviet Union and its satellite countries as lands of incomparable wealth, development and happiness. The Soviet block films, building on the popular science and ‘Kulturfilm’ edifying film tradition, employ accessible or even entertaining tones, yet they carry a strong ideological message. The filmmakers know their trade: they are skilful, imaginative and artistic storytellers. Building on the visual language of New Wave cinema, they often employ the most up-to-date montage technique, use panning or hand-held camera which enhances intimacy and credibility of the image. The narrative of the films are well-composed; the camerawork and the music is professional; the narration is well-structured: the films might seem to be purely factual or personal and emotional in order to impact the viewer. The industry films offer a self-celebratory narrative about the development in mining, forestry, foodstuff production or heart disease research, they are powerful and often persuasive. Well-crafted, they convey a humanistic, optimistic, future- and success oriented message.

After the ‘House of Soviet Science and Culture’ was closed down following the change of regimes in 1990, this rare collection of films became orphan. Thanks to the efforts of Anna Geréb, film historian of Russian and Soviet cinema, this rich sample of propaganda and educational films was spared from destruction and was archived at the Blinken Open Society Archives.