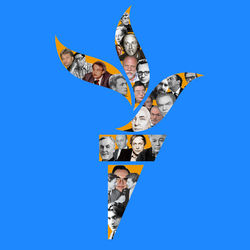 The collection contains 26147 unique audio files that were produced and broadcast by RFE/RL’s Russian Service. Spanning from the very first program on air in 1953 till 1995, when RFE/RL moved from Munich, Germany to Prague, Czech Republic, the broadcast archive of these 42 years cover turbulent times: from Stalin’s death, the harshest battles of the Cold War, the emergence of dissident movement with Samizdat as a part of it, the hopeful times of Perestroika to the crash of the Soviet Union and the emergence of the new Russia, struggling to overcome its heritage.

The over 10 thousand hours of recordings give an unparalleled insight into the politics and the fight for human rights in the Soviet Union; into everyday life of the Russian-speakers living in the USSR or abroad, in a diaspora; into the Russian literature, though unpublished, suppressed and unwanted, yet making its way to the grateful readers; into the differences and disputes between the three waves of Russian emigration with their uneasy relationships in the West; into Russian culture in exile, which would soon make its way back to the motherland.

The broadcast archive include various genres of Radio Svoboda: newsreels and special broadcasts; talk shows written and edited by famous writers, poets, musicians, historians and analysts; literary readings by authors or actors and radio plays; samizdat reviews; liturgies and talks by Orthodox Church reverends; music programs, interviews and press-conferences with fresh emigrants and many, many more.

The original open-reel tapes containing Radio Liberty’s live broadcasts of the ‘Munich period’ (1953-1995) were preserved, archived, digitized and systematized by the Russian Service’s staff in Prague in the late 1990’s. RFE/RL donated both the tapes and the digitized copies to Hoover Institution Archives, Stanford University. In 2015 Hoover Institute authorized OSA to create metadata for the digitized audio, process the collection and prepare the archive for publication online.

Use Conditions:
Ownership of and copyrights to the materials belong to RFE/RL, Inc., 1201 Connecticut Ave., N.W., Washington, DC 20036, USA. Permission to use the materials for purposes other than research and education shall be requested from RFE/RL, zvanersm@rferl.org.