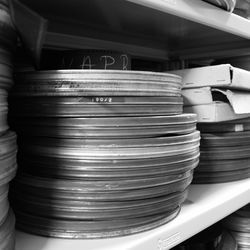 The Paranoia Archive contains 58 Hungarian educational films on ABC (atomic, biological, chemical) warfare released between 1964-1982, as part of a public awareness campaign about protection against weapons of mass destruction. The films were produced by the Ministry of Defence department Polgári Védelem Országos Parancsnokság (PVOP; Civil Defense Alliance), which commissioned the works primarily from the Mafilm Military and Sport Film Studios. Four of the films were directly adapted from Soviet originals with the addition of a Hungarian voice-over.

The early films instructed viewers how to build a bomb shelter at home, what to do in case of a nuclear attack, or how to counteract the side-effects of radioactivity. From the 1970s on, the films presented public drills and evacuations by civil defense units, some of which mobilized tens of thousands of civilians. The films were screened on a regular basis in schools, workplaces, cultural centers, or movie theaters before the main feature which, over time, affected the film’s quality.

In 1991, the civil defense storage facility in Győr was liquidated. The 16-mm black-and-white celluloid films were salvaged and came into the possession of independent filmmaker József Szolnoki, who arranged for their digitization at OSA, where the digital copies remain.