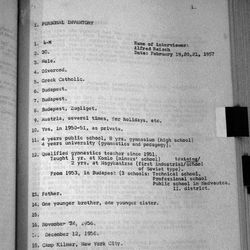 The collection contains 358 digitized items including English-language transcripts of interviews with Hungarian adult and child refugees and related documentation, created by the Columbia University Research Project on Hungary (CURPH) in 1957 and 1958. Financed by the Ford Foundation, the CURPH project focused on the social, economic and political trends in post-war Hungary, up to and including the 1956 Revolution. The collection is also known as the Blinken Collection, due to the generous support for digitization and online publication from Donald and Vera Blinken, the former US ambassador to Hungary and his wife.

According to the project documentation available in the Bakhmeteff Archives of the Rare Book and Manuscript Library of the Columbia University and the Manuscript Archives, over 600 interviews were to be carried out by specially trained, Hungarian field-workers in European and US refugee camps, as well as public opinion researchers at leading American universities. The methodology worked out at Columbia stipulated in-depth interviews based on guided questions, each lasting two to three days. Interviews were recorded in Hungarian, and the collection contains selected English translations of transcripts, as well as the project guide to different types of interview.

Two types of interview were conceived and carried out. Questions concerned everyday life, living standards and working conditions, ideological indoctrination, and social, cultural and value system changes, and produced the largest set of records generated by one single research project into Soviet bloc life in the early 1950s. One-third of the present collection consists of the longer, “Type A” interviews carried out in the US, which enquired into respondents’ social backgrounds, attitudes, role in and opinions of the 1956 revolution, and encouraged respondents to express their views freely. The remaining two-thirds consist of the shorter, “Type B” interviews, recorded at the main European refugee centers in Paris, Vienna, London, Rome and Feldafing (southwest of Munich), and which used questionnaires to elicit more detailed information from respondents.