Finissage - Some Music, Something Else… 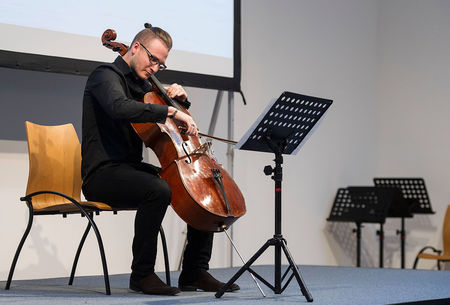 The awards of the music competition, launched by the Vera and Donald Blinken Open Society Archives and Intermezzo Foundation for talented young Hungarian composers, were presented last Thursday at the Finissage and Awards Gala of the exhibition, Some kind of Opposition, curated by Axel Braun. This event also the premiered winning pieces that were performed by the students of the Hungarian Academy of Music.

At the end of February 2016, the Vera and Donald Blinken Open Society Archives and the Intermezzo Foundation invited composers under thirty to submit pieces that had previously not been performed. A unique aspect of the competition was that it specified not only the length of the pieces and the use of instruments but the theme as well. Applicants had full access to the background files and the audio and visual documents of the exhibition for an inspirational base. The composers had one month to write the pieces and send them to the Jury made up of composer Gyula Fekete and Miklós Csemiczky, and conductor Gergely Madaras.

The Fidelio Média Kft increased the prestige of the competition by offering participation in the Fortissimo mentor program for one composer.  Upon the suggestion of Mr. Géza Madaras, the organizer of the competition the jury selected the composer for the Fortissimo mentor program whose composition related to the theme of the exhibition in both the most imaginative and complex manner.   The most perfect fit was Eau by Nicolas Namoradze.

The musicians – themselves students of the Liszt Ferenc University of Music, too – rehearsed in the presence of the composers, in this way giving an impeccable performance despite the extremely short practice time.Each of the four medalists related to the inspirational source materials in their own way. In some the relationship was felt directly, in others only as associative effects. What united the four pieces was their exceptional power to create unique atmosphere.

The competition was a success for more than one reason. It was supported by two independent cultural institutes (the Vera and Donald Blinken Open Society archives and the Intermezzo Art Fund) and provided opportunity for young composers and instrumental musicians outside the state support system and the musical institutional framework. The young artists were given an opportunity to try themselves out individually as well as in a team, both ways indispensable for a successful musical career, and, added to this they could formulate their reflection on a social problem through their own, particular and sensitive way.