Rodolf Hervé Videos on Hungary's Alternative Scene in the 1990s 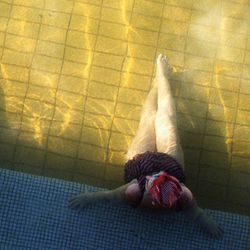 Video recordings on 55 DVDs made by Rodolf Hervé from 1990-1997 while he lived in Budapest, where he documented and participated in the flourishing alternative cultural scene of the early transition years. Focusing on the landscape and people of the capital, much of the footage was shot at alternative bars, concerts, performances and exhibitions, and features many of the leading alternative figures of that era, including Tamás Király, Ágnes Bárdos Deák, András Szirtes, Tibor Barcs, Zsuzsa Bende and others. The series also includes recordings of night-time passengers on the No. 6 tram, the “Warm Water” series of photographs of bathers in Budapest's public baths, and Hervé's experiments with photo, video, digital photography, electrographic, collage and performance media, including recordings made by him, and by his associate and cameraman, Tamás Szűcs, as well as Szűcs's compilation of Hervé's footage into the film "Notes of a Nomad”. There are also a few recordings of public and family events shot in Guadeloupe and Paris. The vast majority of the recordings consists of raw documentary footage, with a few finalized items.

Part of the Video Recordings on Alternative Cultural Life in Hungary in Transition collection.