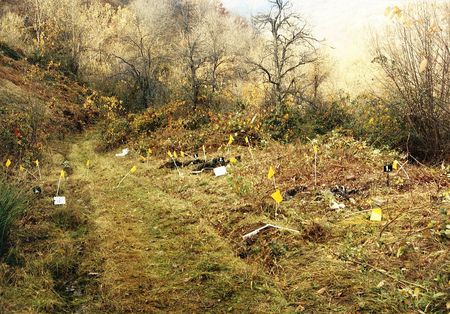 On Human Rights Day, shortly before the Dayton Accords were officially signed in Paris 25 years ago, Blinken OSA remembers those for whom The General Framework Agreement for Peace in Bosnia and Herzegovina, although it put an end to the 1991-1995 wars, came too late: the over 100,000 victims. We remember human loss from the peculiar perspective of the forensic scientist in search of and identifying the missing.
Our holdings contain the records of Physicians for Human Rights (PHR), a human rights organization using medicine, science and law in investigating human rights violations. As PHR’s offered standard forensic assistance to local (ethnic) commissions in finding and identifying their missing persons at grave sites that were not in the focus of the International Criminal Tribunal for the former Yugoslavia, its documentation includes 137 forensic monitoring reports, supported by close to 9,000 meticulously logged color photographs shot in situ by forensic scientists. They are being digitized and will become available for research next year.

Documenting various stages of the forensic investigative work, the collection brings together images from over 500 exhumation sites across Bosnia and Herzegovina: forests, meadows, riverbeds, caves and hillsides (like the one near Kravica featured on this photo), as well as man-made environments, such as schools, stadiums, warehouses, and cemeteries. A sobering reminder for generations to come that their favored fishing areas, hiking paths and woods were and may still be hiding bodily remains of civilians murdered in, or that their schools have been used as detention centers for "others" and their soccer stadiums as makeshift cemeteries during the recent wars.

As the renowned photographer and our photo-archivist colleague Lenke Szilágyi, who works with these photographs daily puts it:

"It might sound as a commonplace that numbers by themselves are abstractions; yet, as I am digitizing this collection, picture by picture, and nearing the 2000th negative frame, what shocks me the most is their quantity. And two thousand is just a small portion of the total. Someone literally wiped these people from the face of the earth, and now someone else dug them up to at least try to attach a name to the remains so that some of the annihilation could be undone.

I try to keep a distance, not to really look at these documents; still, here and there a picture catches my eye which is hard to forget. A pair of tiny baby shoes sticking out of the messy content of a sack, mud caked on it. What can drive people so mad as to murder their neighbors, not sparing the children? What does it take to unleash such hate?

The landscape is beautiful there, my fellow hikers keep inviting me, but I don’t want to go. I would feel like a disaster tourist, haunted by the thought of what can still be under the ground we are walking.”

In a court environment, the burden of interpreting aftermath photographs is on investigators and forensic experts. But the lack of disturbing violent activities on the photos successfully engages the imagination of contemporary observers and enables them to emotionally connect with the stories of victims. "When they are not a direct evidence of acts of violence, photographs become testaments of human pain and suffering. They position the viewers as secondary witnesses to a post-atrocity situation and enable them to gain a profound understanding of past crimes." (Szilagyi, 2018)

"What does it mean to stand on the place of death? Knowing violent things happened, right here, but seeing apparently nothing, no trace of facts, no signs of struggle, no visible residue to alert us to what transpired […] the grass in the meadow can archive the crushed weight of bodies." (Schuppli, 2014)