Nobel Peace Prize 2022: Against Terror Past and Present 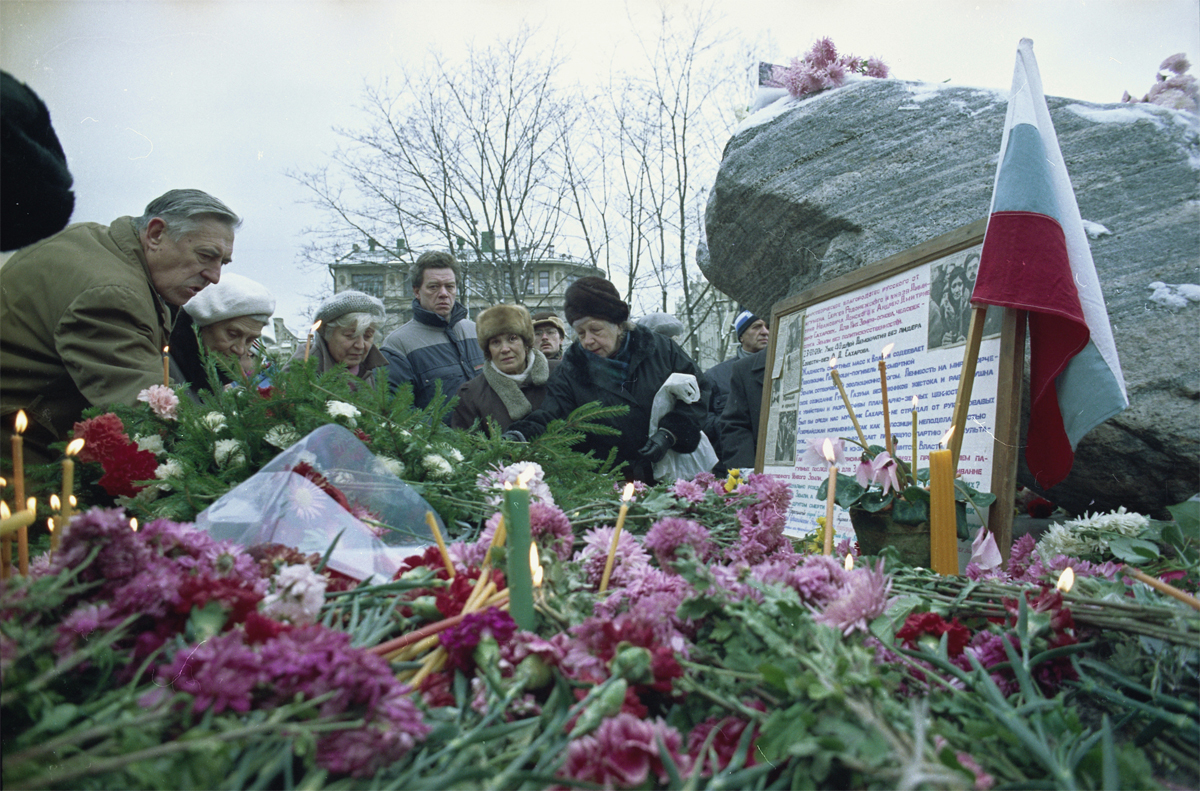 “Whose terror was it? . . . The mass consciousness views mass terror the same way it viewed the Plague during the Middle Ages. We were living our lives, and then suddenly—the Plague! It came and it killed many, many people. And then it left, and we continued on living. But this is not right. Memorial’s response is a fairly simple one. It was the terror of the state against its citizens.” – Arseny Roginsky, co-founder and long-term leader of the Memorial Society, in the film The Right to Memory

Today, on December 10, 2022, the Nobel Peace Prize is awarded in Oslo. Among the laureates is Memorial, a complex society that helped identify and rehabilitate hundreds of thousands of victims of Stalinist terror, and investigate the Soviet regime’s crimes against humanity. Moreover, Memorial advocated human rights and freedoms in today’s Russia as well, compiling lists of present-day political prisoners and demanding their immediate release. Although in February 2022 the two leading legal entities of the group, International Memorial and the Memorial Human Rights Center, were liquidated by Russian authorities, dozens of the society’s regional and European branches continue their fight.

Forrás. [Source., or Boiling point] is a blog series by the Blinken OSA staff at the Hungarian news website 444.hu. Katerina Belenkina, researcher at Blinken OSA, recalls the story of Memorial, presenting how it emerged to fight for the memory of the Soviet state’s victims, and eventually became itself a victim of the current Russian state. The post originally appeared on osaarchivum.444.hu, on the day Memorial was awarded the Nobel Peace Prize.

To understand the gravity of this year’s Nobel Peace Prize and the significance of Memorial for Russia and the world, we need to go back to the Soviet Union during the perestroika era, when Memorial Society came into being. Archival documents preserved at Blinken OSA reveal not only the tectonic shifts in late Soviet politics and society that allowed human rights and responsibility for the crimes of Stalinism to gain spotlight, but also the instrumental role Memorial, a grassroots initiative, played in this process. 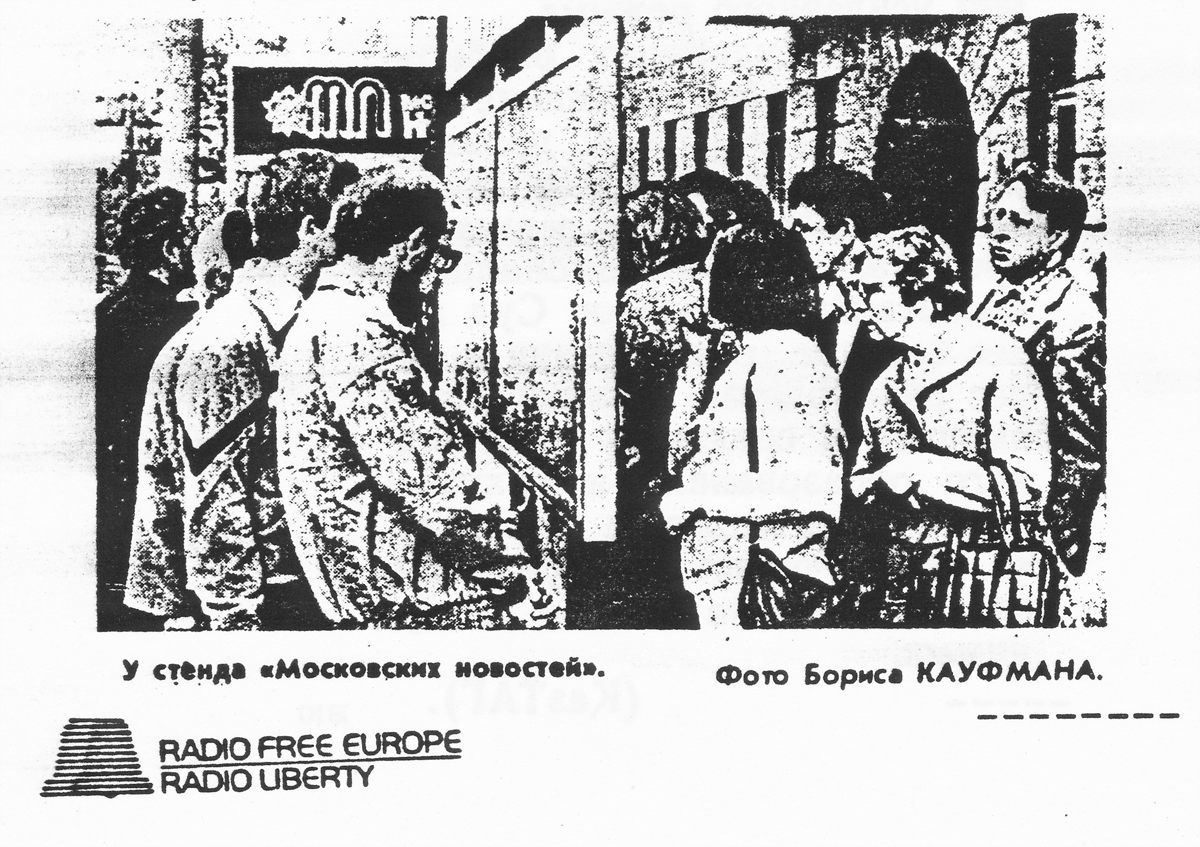 In the late 1980s, glasnost (openness) was one of the key directions of the perestroika (restructuring) reforms announced by Mikhail Gorbachev. It meant the removal of many taboos in public discourse, among which, first and foremost, was the topic of political repression. A huge number of articles appeared addressing Stalinist terror, and, at the same time, the popularity of the printed press reached its peak: every morning in Soviet cities, long queues formed before newsstands, there were not enough copies for everyone, and people stood by the sides of street stands where newspapers were hung out. It was also there, on the streets, be it rain or blazing sun, that people discussed what they had just read.

In the atmosphere of mass interest in Soviet past, the first initiative group, the Group for the Preservation of the Memory of Soviet Repression Victims (soon renamed Memorial) was formed in 1987 in Moscow. Similar groups later appeared throughout the USSR, making Memorial a wide-spread network—or society—of regional organizations. Initially, people gathered around the idea of erecting a monument to the victims of Stalinist repression. Soon, however, a broader mission emerged; to create an institution that would include not only a monument, but also a scientific, information, and educational center with a publicly accessible archive, museum, and library.

The first truly mass event to commemorate the victims of terror in the USSR (in addition to rallies) was the Week of Conscience in 1988, held in Moscow at the DK MELZ (House of Culture of the Moscow Electric Lamp Plant). The event was widely advertised in the press, including the magazine Ogonyok, “the mouthpiece of perestroika.” Theater director and artist Dmitry Krymov made a huge relief map of the Soviet Union, displaying locations of Stalin’s “correctional labor camps” in the form of light bulbs; and there were a lot of light bulbs... A wooden wheelbarrow, a copy of those used in the camps, was placed under the map, and served as a cash donation box to build a monument to the victims of repression. By the end of each evening, the wheelbarrow was filled to the top with money (although it was, to put it mildly, a penniless time). On the other floor of the House of Culture, a Wall of Memory was built: a concave wall with, initially, only a few pictures of people who had died during repression. By the end of the week, there was not a single empty spot on the 10-square-meter wall completely covered with photos brought by visitors, descendants of those perished in Stalinist purges and camps, many of whom travelled from other cities. 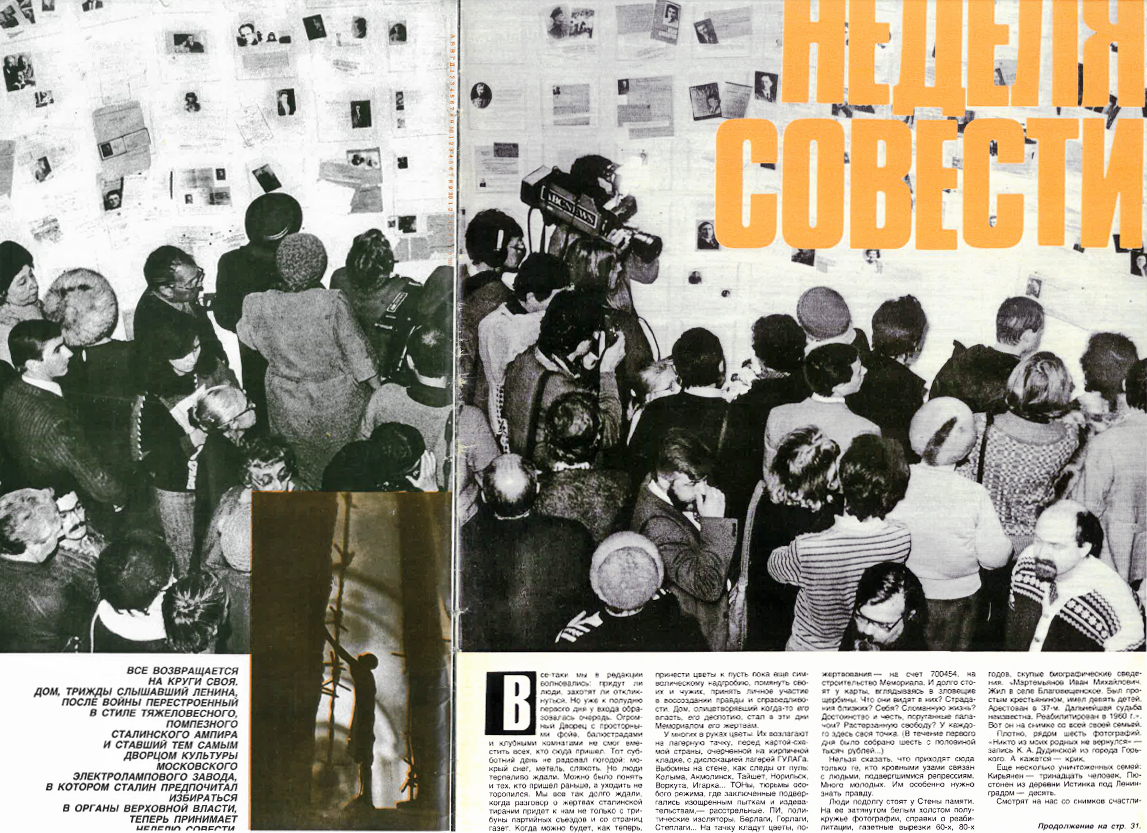 While the Week of Conscience was not organized by Memorial, the group was invited to participate. At that time, in the entire USSR, no mechanisms or institutions existed that would have helped those seeking information about repressed relatives. Opening an information center at the MELZ House of Culture, Memorial created an unmistakable public platform, providing visitors with the opportunity to get historical background on Soviet terror, and reconnect with the fates of tragically deceased family members. During evenings, famous writers, actors, artists, journalists, and public figures spoke openly about the importance of addressing the crimes of Stalinism, and the first documentaries about the repressions were screened. Among them was the film Solovetsky Power.

At the end of 1988, Memorial was given a small room in Moscow for visitors, where anyone could bring documents (testimonies, relics) about repressed family members, or inquire information on missing relatives. Many knew nothing about their loved ones; the truth about the repressions had been concealed not only officially, but also in private life. Now, for the first time in decades, people were trying to learn the truth, and Memorial became their main source of information. Experts at Memorial provided questionnaires to create a unified register of victims. Over time, the collection grew, and became an extensive archive. Since then, the database has almost completely been digitized and is accessible—for now.

In January 1989, the Founding Conference of the umbrella organization All-Union Voluntary History and Education Society Memorial took place. Back in 1987, the initiative group of Memorial had consisted of 11 people; in 1989, the Founding Conference of Memorial Society was attended by 1,200 delegates from 103 cities. That was how a small grassroots group grew into a major social movement. The first honorary chairman of Memorial Society was Andrei Sakharov, who had previously been elected to the Memorial Public Council through street opinion polls (another telling phenomenon of those times). He took, in what turned out to be the last years of his life, an active part in the movement, and traveled to memory sites across the country.

On October 30, 1989, Memorial organized a rally near Lubyanka, the headquarters and prison of the KGB in central Moscow. About 3,000 people with candles in their hands formed a human chain around the building to honor the millions of victims. A year later the same day and at the same place, Memorial erected the Solovetsky Monument or Solovetsky Stone, the first and most-known monument to the totalitarian regime’s victims: a granite boulder brought from the Solovetsky prison camp and dedicated to all victims of the political repression. October 30, now officially the Day of Remembrance of the Victims of Political Repressions, was not chosen randomly. In 1974, political prisoners from the Mordovia and Perm camps went on a hunger strike on October 30, to protest against political repression. On the same day, dissident human rights activist and author of the Chronicle of Current Events, Sergey Kovalev, held a press conference in Andrei Sakharov’s apartment, reporting this action; and was soon arrested. 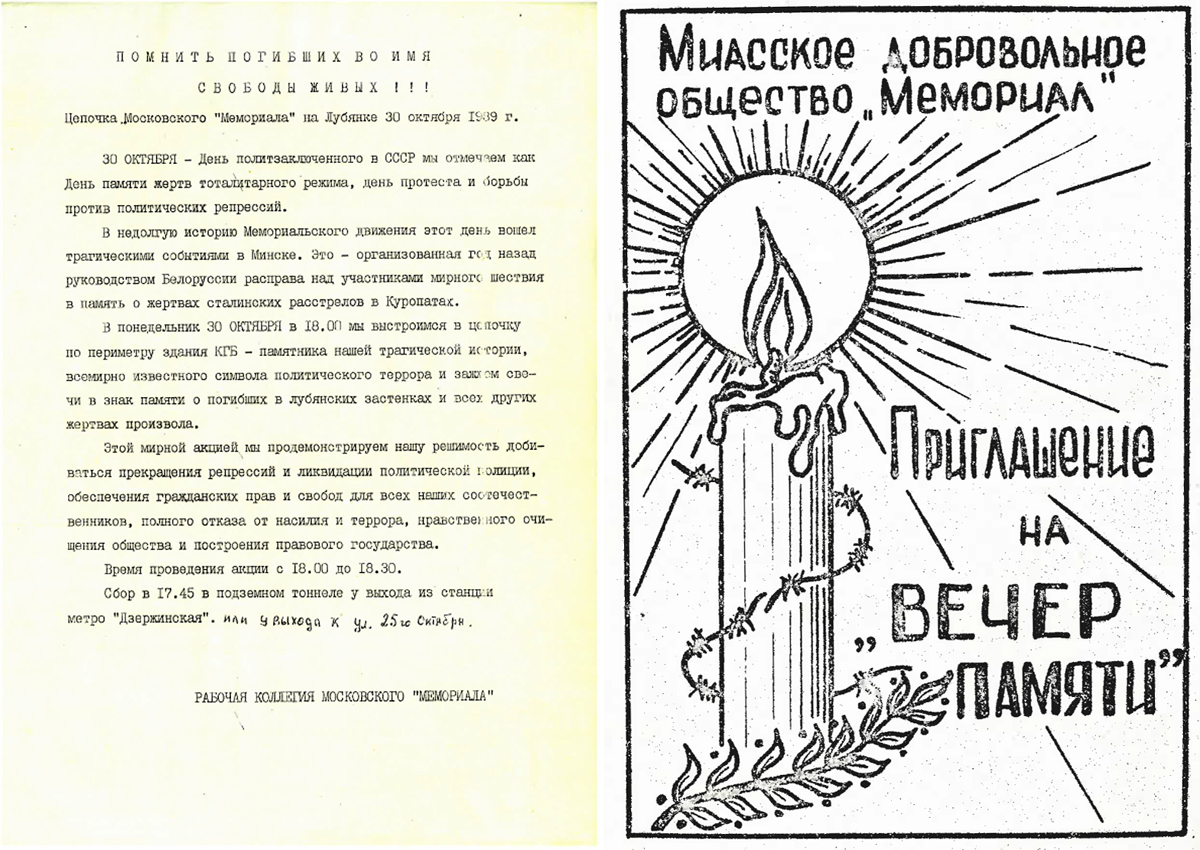 Decades later, in 2007, Memorial began holding an annual event called Restoring the Names, which would gather thousands by the Solovetsky Stone each October 29, the day before the Day of Remembrance, and last for 12 hours. People joining the action received sheets of paper with the name of a victim of the Soviet regime, their age and occupation at the time of execution, and the date of execution (from the Memorial database), and, after standing in line for hours, read the name into a microphone. Russian authorities banned the annual rally in Moscow in recent years, but it continues in multiple alternate locations and online.

Memorial was never a political association, but when independent elections began to take place in Russia in the early 1990s, it supported democratically-minded candidates. One of the deputies supported by Memorial, the aforementioned Sergey Kovalev, became the Chairman of the parliamentary Committee on Human Rights, and as such, drafted the Law on Rehabilitation with the involvement of experts from Memorial. In the early 1990s, the Memorial Human Rights Center was formed to observe human rights and document violations of these rights not in the past, but in the present. In order to obtain reliable information about current events, Memorial’s human rights activists traveled to the hot spots of armed conflicts (South Ossetia, Tajikistan, Chechnya, and many, many others), even by risking their lives. Memorial’s stance on legal issues increasingly clashed with official policies.

In recent years, Memorial frequently became subject to legal and financial audits and exorbitant fines, even searches, raids, and prosecutions; their offices were attacked by unidentified law enforcement officials, with the connivance of the authorities. In 2016, the Ministry of Justice declared Memorial a “foreign agent,” requiring that all of its publications be marked accordingly. Over the 35 years of its activity, the society has published hundreds of books, collected and published an enormous database of repression victims, realized numerous educational projects—including annual school contests  across the country—, created many exhibitions, and organized tours to memorial sites. The alleged repeated violation of the law on “foreign agents” served as reason for the lawsuit against International Memorial (the central legal entity established in 1992), while a separate case accused the Human Rights Center Memorial of justifying extremist and terrorist activities by compiling a list of political prisoners in today’s Russia. In December 2021, the Supreme Court of Russia and the Moscow City Court ruled to shut down International Memorial  and the Memorial Human Rights Center. 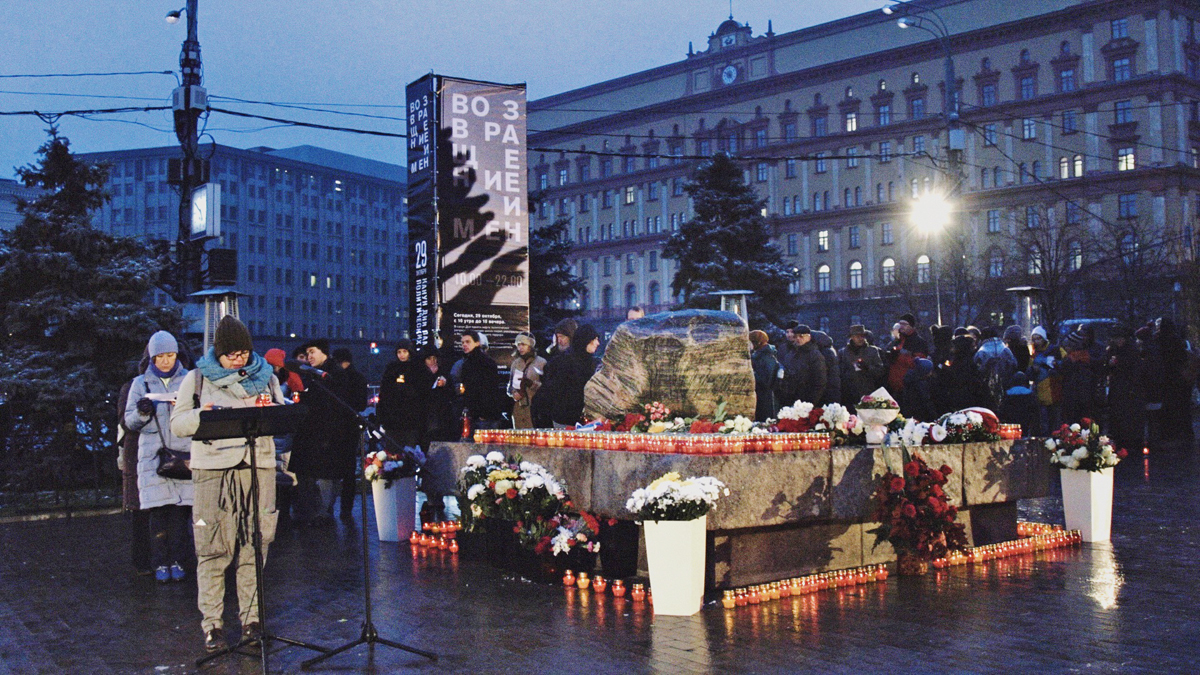 Queue around the Solovetsky Stone at a Return of the Names event.
(Photo by Mika Altskan)

To conclude, it is worth to revisit one anecdote. Dissident and human rights activist Elena Bonner once recalled that Mikhail Gorbachev had come to the funeral of her husband, Academician Andrei Sakharov, to offer his condolences. He approached her and said, “After the funeral, we will think of the best way to honor the memory of Andrei Dmitrievich [Sakharov].” Bonner replied, “No need to think! Register Memorial.” One month later—following many earlier applications that had repeatedly been rejected for bureaucratic and more probably for political reasons—Moscow Memorial was officially registered on January 16, 1990. All three figures in this historical episode received the Nobel Peace Prize: Sakharov in 1975, Gorbachev in 1990, and Memorial today, in 2022. Symbolically, these three awards connect three eras and three phenomena that played a significant role in the struggle for freedom and democracy in the Soviet and post-Soviet period; Sakharov represented the dissident movement, Gorbachev is strongly associated with the collapse of the USSR, and Memorial stands for the restoration of historical memory and the struggle for human rights. The scientific, professional, and moral reputation of Memorial is impeccable; which, in Russia, can only be achieved through selfless work and dedication. For decades, they defended dissidents and the repressed, and now the political rollback taking place in today’s Russia has turned the organization into a subject of itself ; yet, one must believe and hope that Memorial will continue its work in the future.