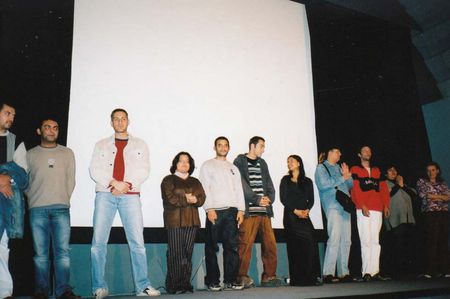 Despite the lockdown, our lives as archivists went on at Blinken OSA. Colleagues at the Audio-Visual Department have completed the processing of the Roma Media School (Roma Média Iskola) video collection. Another unique collection has become available for researchers!

The Black Box Foundation, the same initiative that had captured the process of the regime change on video, launched its Roma film school in 1996–97, called Community Television School (Közösségi Televíziós Iskola), renamed in 2001 as Roma Media School. The school strived to provide Roma students with the opportunity to receive a training in journalism and especially television reporting and documentary filmmaking, thus nurturing a generation of creative professionals addressing the conditions of Hungarian Romas and the society in general from an authentic Roma point of view. “Why filmmaking needs now Roma people too?,” Márta Elbert, the director of the foundation posed the rhetorical question to herself in 2002, during an interview available in the collection, answering, “Because we are never going to be able to make the films they can make.”

From the beginning, the program included not only the technical skills necessary for filmmaking and broadcast journalism, but also sociology, media law, and cultural studies. The Community Television School comprised an intensive introductory course and a 6-month internship at mostly rural cable networks. When in 2001 the school transformed into the Roma Media School, teaching changed as well, offering a 10-month course with more focus on documentary filmmaking, in cooperation with the Academy of Drama and Film in Budapest. Thus, the television reports of the first period were followed by documentary films and even festival successes; already the first class collected five prizes at the 2002 National Student Film Festival, followed by numerous other acknowledgements. The school operated until 2004, relying in great part on the support provided by the Soros Foundation.

The recently processed collection is part of the Black Box Foundation Video Archive, preserved at Blinken OSA. The collection includes both the Community Television School and the Roma Media School films, with the television reports and documentary films the students shot, and even raw materials. The detailed descriptions can be found in the online catalog, the digitized films are available in the Research Room (reopening soon). For further information, contact the Research Room staff at info@osaarchivum.org.